Accessibility links
50 Years After 'Loving,' Hollywood Still Struggles With Interracial Romance : Code Switch Hollywood's long history of not putting interracial romance on-screen goes all the way back to the Hays Code, which prohibited the depiction of "sex relationships between the white and black races." 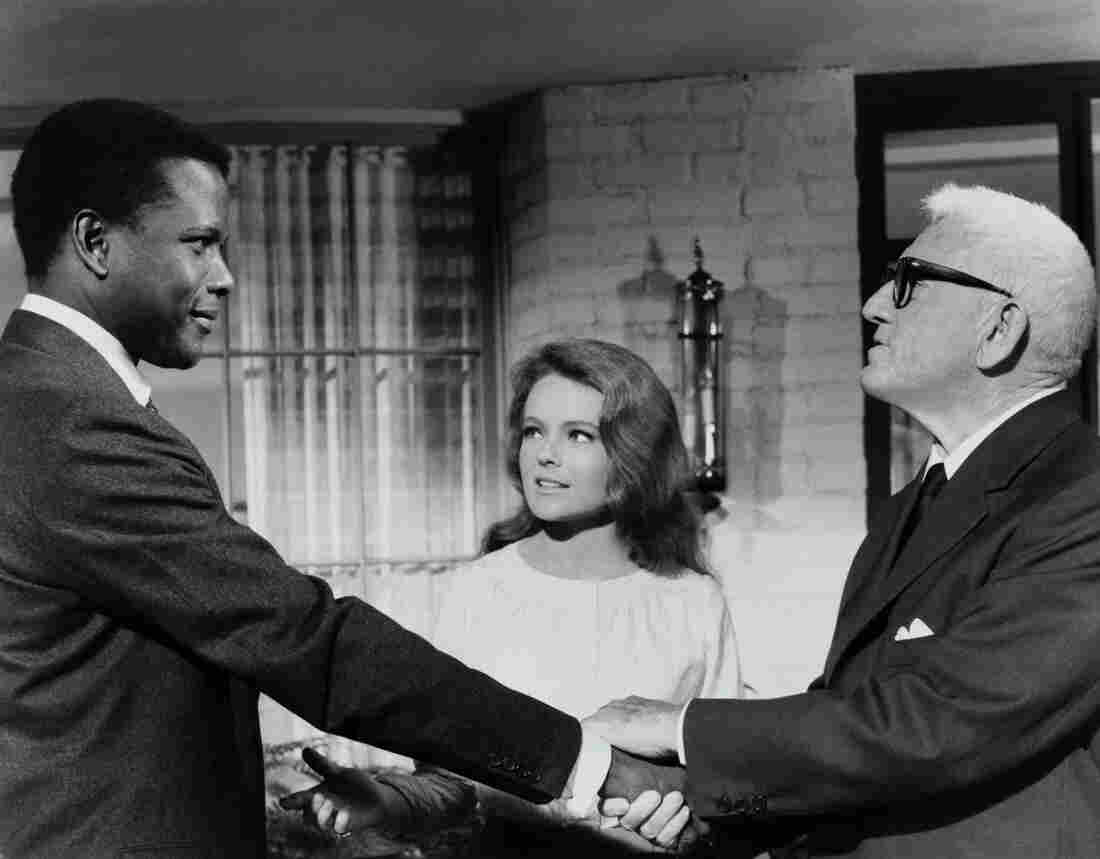 Guess Who's Coming to Dinner arrived in theaters six months to the day after interracial marriage was legalized by the Loving v. Virginia Supreme Court decision in 1967. Above, Sidney Poitier, Katharine Houghton and Spencer Tracy. George Rinhart/Corbis via Getty Images hide caption 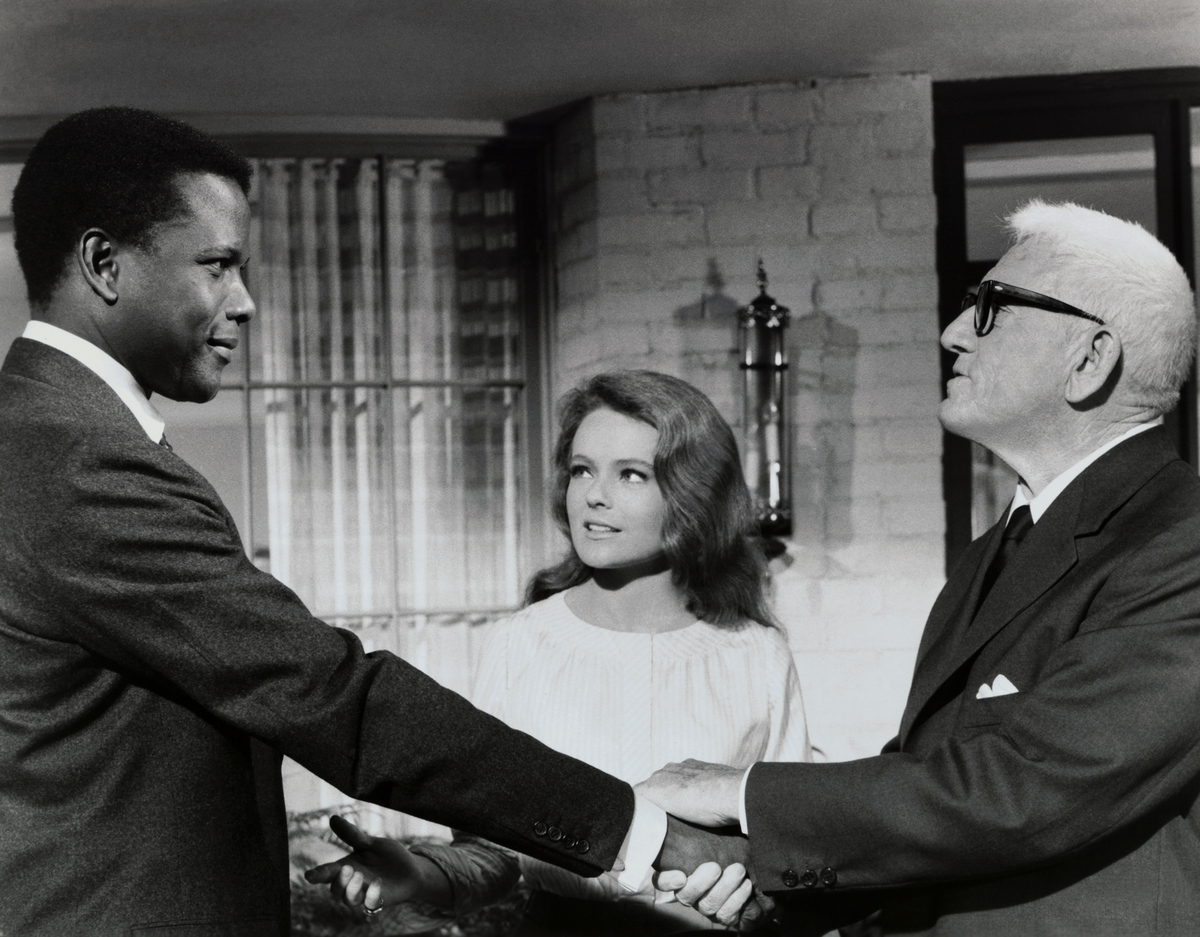 Guess Who's Coming to Dinner arrived in theaters six months to the day after interracial marriage was legalized by the Loving v. Virginia Supreme Court decision in 1967. Above, Sidney Poitier, Katharine Houghton and Spencer Tracy.

Profits are a powerful motivator for Hollywood studios. So it might seem obvious that a blockbusting indicator of audience acceptance for interracial romance on-screen would lead to studios greenlighting more of them. But prejudices in Hollywood were as long-standing as they were elsewhere in society. Those prejudices did not disappear overnight, and the film industry did not embrace mixed-race couples on-screen.

There had been interracial screen romances, even in the silent era, but they were almost always pictured as either comically foolish or flat-out doomed. D.W. Griffith ended his silent tragedy Broken Blossoms Or the Yellow Man and the Girl with the deaths of both his title characters — a Chinese immigrant and a London prizefighter's daughter.

The silent drama The Bronze Bride, about a white fur trapper who marries a Native American woman, also ended with tears. And in Show Boat in 1936, things end happily for nearly everyone except Julie, the wife of the showboat's white leading man. She is of mixed race, but has been passing as white.

In the song "Can't Help Lovin' That Man of Mine," Julie sings of being helplessly in love, and her husband is devoted to her. But she will nonetheless end up drunk and alone at the film's end, looking from the shadows at the happier characters who have married within their own race.

In that, she had lots of company on-screen. Hollywood had adopted a Motion Picture Production Code in 1930 — popularly known as the Hays Code for its author, Will H. Hays, president of the Motion Picture Producers and Distributors of America — which explicitly prohibited the depiction of "sex relationships between the white and black races." The code was meant to curb what bluenoses of that era considered immorality, and with interracial marriage then illegal in 30 states, depicting it would arguably have been condoning an illegal act.

Though Show Boat had been a hit on Broadway, movie theaters, especially in the South, might well have refused to play it even with the Production Code seal of approval. But the filmmakers had a trick to get around objections — a casting gambit used in many motion pictures of that era: Audiences were not actually seeing a black/white couple on-screen, because the biracial character was played by Helen Morgan, a white actress. Griffith had done the same thing in Broken Blossoms, casting a heavily made-up Richard Barthelmess as Chinese immigrant Cheng Huan.

The same thing happened when Show Boat was remade in 1951. Although Lena Horne campaigned hard for the role, Ava Gardner was cast as Julie, and not only was she not black, she wasn't even singing (though she certainly could have; she recorded a vocal track they ended up not using that is lighter and more contemporary to modern ears).

Colorblind and, in several different senses, tone-deaf, this qualified as Hollywood artificiality at its peak. And it followed close on the heels of another drama Horne had campaigned for, Pinky, about another character who was passing as white. That part went to Jeanne Crain, for whom passing was relatively easy, as she was white. She got an Oscar nomination as best actress for pretending not to be.

Foreign films weren't as timid. In 1935, Josephine Baker — who had moved to Paris because of racial prejudice in the U.S. and was becoming a big star there — starred in the French-made Princess Tam Tam, playing a Tunisian woman who is the muse of a white French novelist.

In the U.S., though, because of the Hays Code, that film and others like it played only in theaters catering strictly to black patrons. Then, in 1956, the code was revised, and the stipulation about race was dropped, which allowed a blonde Inger Stevens to have what was, at the time, an incendiary conversation with Harry Belafonte in The World, The Flesh and The Devil, a science-fiction film in which a nuclear war had left the two of them virtually alone in the world. (Note: The dialogue below contains language some readers may find offensive.)

Stevens has asked Belafonte to be honest with her, and Belafonte has responded that if she pushes, he'll be "so honest it'll burn you."

When she does push, he erupts in fury: "If you're squeamish about words, I'm 'colored.' If you face facts I'm a Negro. If you're a polite Southerner, I'm a 'Negra,' and I'm a 'nigger' if you're not. ... A little while ago, you said you were 'free, white and 21.' That didn't mean anything to you. Just an expression you'd heard a thousand times. Well, to me it was an arrow in my guts."

Stevens asks for help getting it right: "You're a fine, decent man; what else is there to know?"

"[In] that world we came from you wouldn't know that," Belafonte's character replies. "You wouldn't even know me. Why should the world fall down to prove I'm what I am, and that there's nothing wrong with what I am?"

Good question, and others were asking it, too: In the British film A Taste of Honey, Rita Tushingham gets pregnant by a black sailor and decides to keep the baby. Hollywood's first interracial kiss appeared in the drama Island in the Sun. And the era-defining Guess Who's Coming to Dinner arrived in theaters six months to the day after interracial marriage was legalized by the Loving decision.

Lawyers only had to make their closing argument to nine Supreme Court justices. Spencer Tracy's summation went out to more than 40 million moviegoers, when he said this to Sidney Poitier and Katharine Houghton:

And that broke the logjam, right?

No, not really. Hollywood spent the rest of the 20th century debating how to follow Guess Who's Coming To Dinner, and mostly deciding not to. 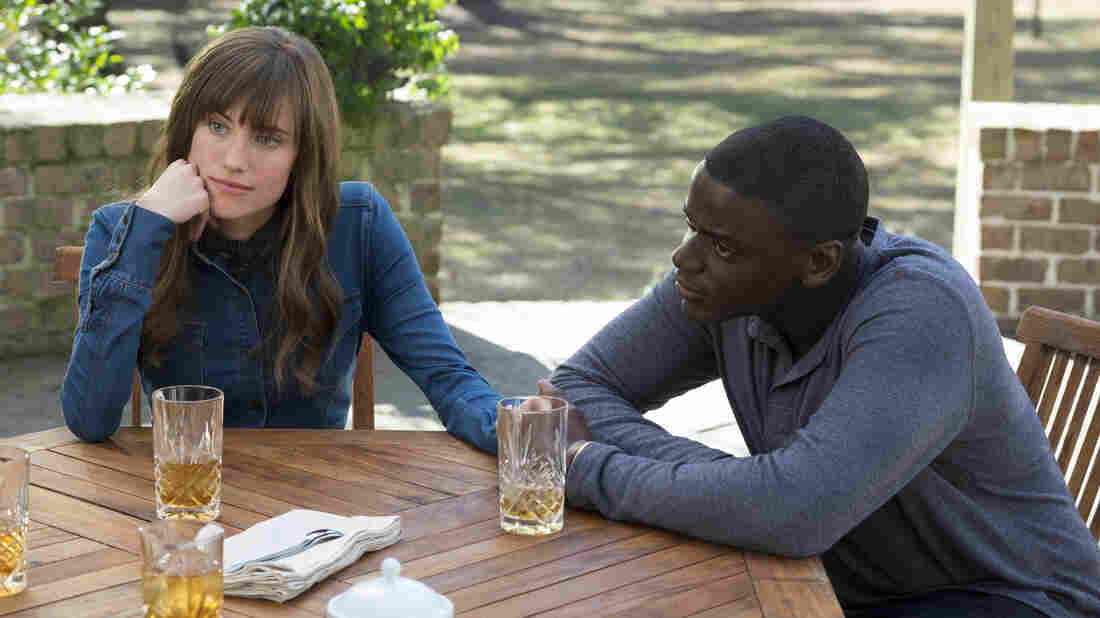 Allison Williams and Daniel Kaluuya star in Jordan Peele's Get Out. Click here for a review. Justin Lubin/Courtesy of Universal Pictures hide caption 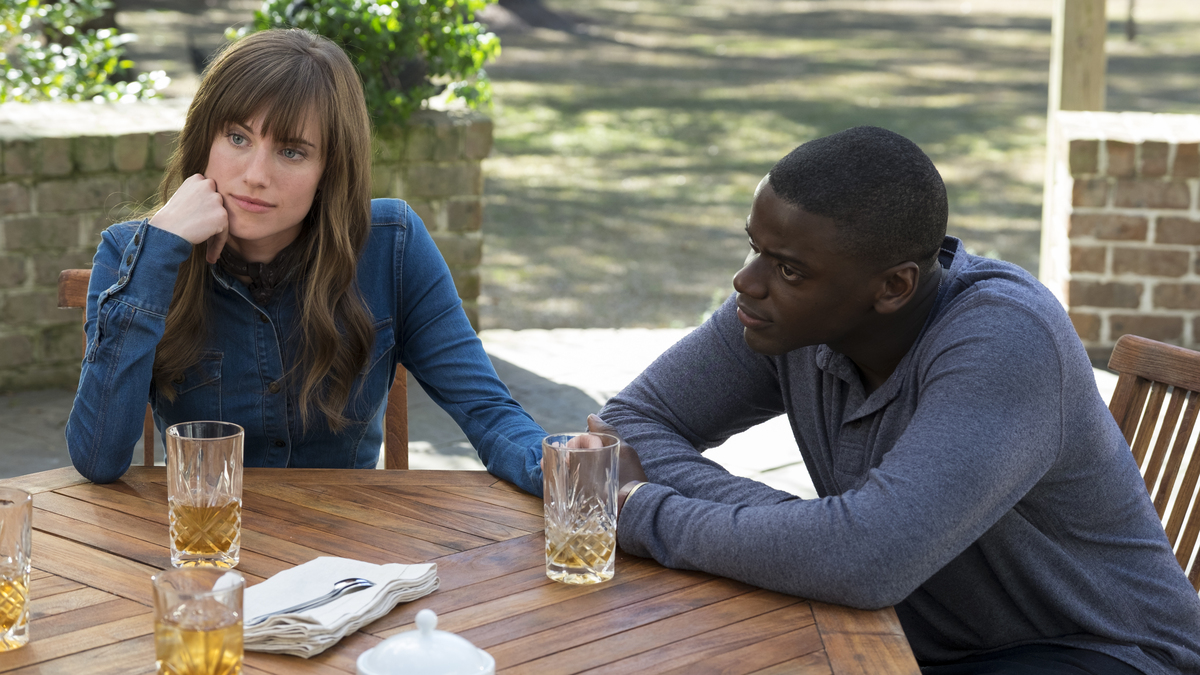 Allison Williams and Daniel Kaluuya star in Jordan Peele's Get Out. Click here for a review.

Bromances with black-white pairings were fine — say, the Lethal Weapon franchise. Producers who could attract stars of sufficient wattage — say Kevin Costner at the height of his fame, and Whitney Houston at the height of hers — could dare audiences to resist their pairing in a film like The Bodyguard. And there were occasional problem-dramas that tackled the issue head-on as an issue — Spike Lee's Jungle Fever, for instance, or the lesbian interracial romance The Watermelon Woman.

But for many in Hollywood, the risk of alienating some part of the audience has not seemed a risk worth taking on a multimillion-dollar budget. So Will Smith and Denzel Washington have spent most of their careers appearing opposite African-American love interests, and Brad Pitt and Tom Cruise have not. Never mind that multiracial casting has been a boon at the box office for, say, the Fast and Furious films.

There are, of course, outliers. Jordan Peele's satirical dramedy Get Out is a witty look at social stereotyping, which uses race to subvert and amplify horror tropes. With a first-time director, Get Out has taken in almost a quarter of a billion dollars at the worldwide box office.

Also this year, in Everything, Everything, an African-American girl-in-a-bubble and a white neighbor fall in love. The supporting cast of Beauty and the Beast turned out to have two interracial couples, once the magic spell was broken. And in the upcoming comedy The Big Sick, Kumail Nanjiani will tell the true story of how he, a man of Pakistani descent, met his Caucasian wife.

These films, let's note, make sense in the current movie marketplace, especially for younger viewers. The Pew Research Center recently reported that in 2015, the most recent year for which figures are available, "17 percent of all U.S. newlyweds had a spouse of a different race or ethnicity." That compares with 3 percent in 1967 — the year of the Loving decision and of Guess Who's Coming to Dinner.

The nation has changed, and Hollywood will, too. At the moment, though, it's still playing catch-up.