Accessibility links
The Largest U.S. Latino Advocacy Group Changes Its Name, Sparking Debate : Code Switch The National Council of La Raza renamed itself UnidosUS this month, causing a rift in the U.S. Latino community. Some see it as shedding a dated name, but others see it as leaving a legacy behind. 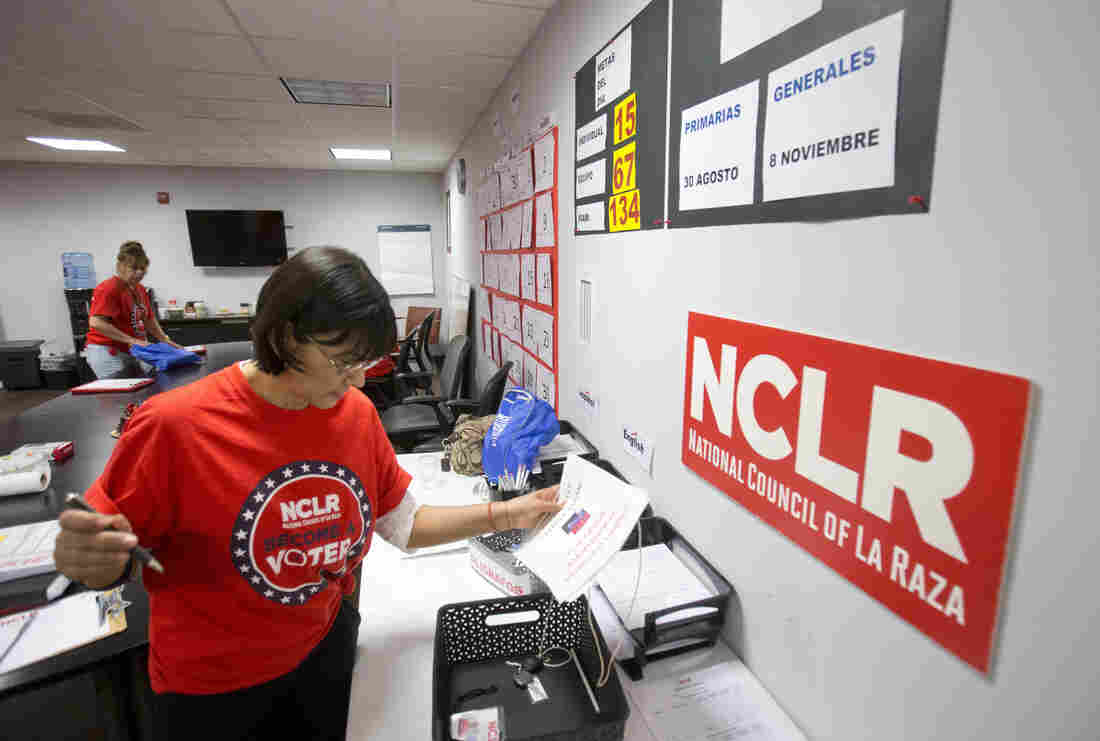 Canvasser Ana Mejia gathers her supplies at the offices of the National Council of La Raza in Miami in 2016. The NCLR renamed itself UnidosUS this month, causing a rift in the U.S. Latino community. Some see it as shedding a dated name, but others see it as leaving a legacy behind. Wilfredo Lee/AP hide caption 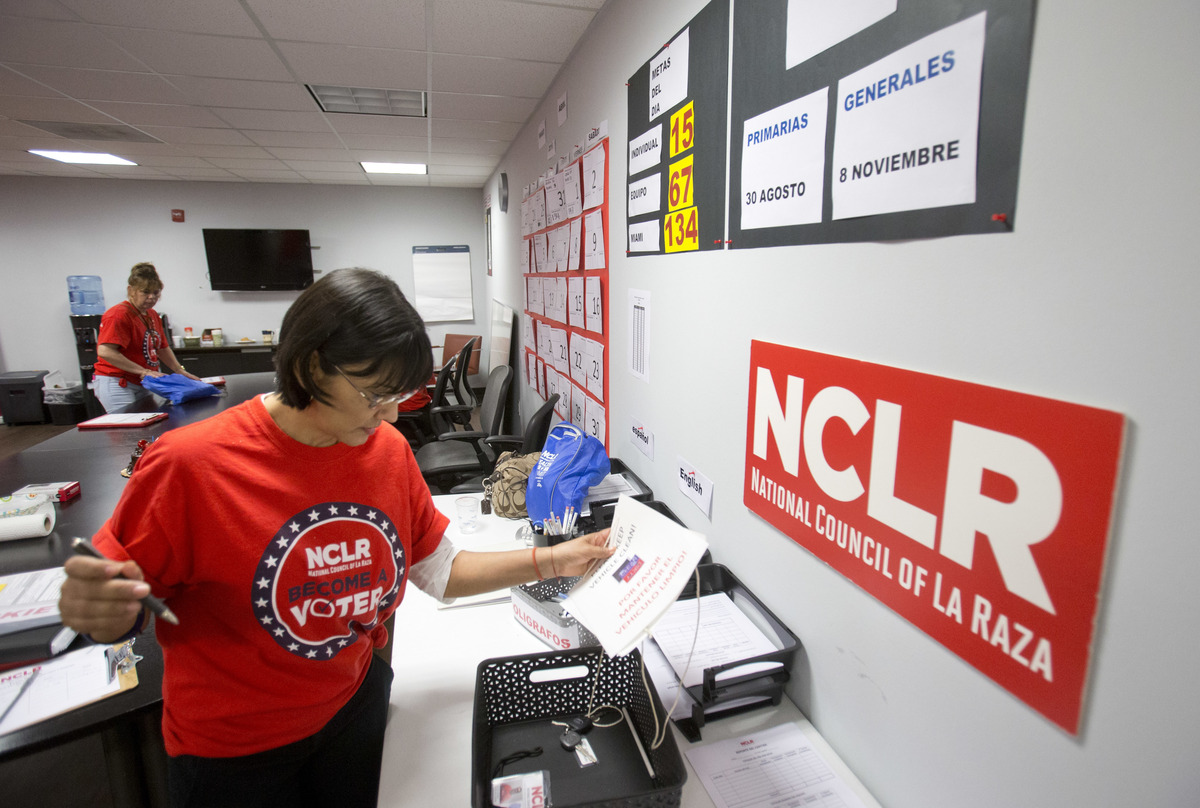 Canvasser Ana Mejia gathers her supplies at the offices of the National Council of La Raza in Miami in 2016. The NCLR renamed itself UnidosUS this month, causing a rift in the U.S. Latino community. Some see it as shedding a dated name, but others see it as leaving a legacy behind.

In an attempt to reach a younger and more diverse audience, the largest and most well-known Latino advocacy group in the U.S., the National Council of La Raza, renamed itself this month. The new name, UnidosUS, was announced at the group's 2017 conference in Phoenix. This has caused a rift in the U.S. Latino community — some see it as shedding a dated name, but others see it as leaving a legacy behind.

The National Council of La Raza rose out of the Chicano civil rights movement in the late 1960s and '70s. It was a cultural and political movement led by Mexican-Americans, who were advocating for farm workers' rights, political rights and access to higher education. Since then, NCLR has served the Latino community on issues like immigration, health, housing and education.

Throughout those years the name has remained controversial. The literal translation of "la raza" is "the race," but a more accurate translation is "the people."

Some have come to the defense of the name change. Raul Reyes, an attorney and the former host of the MSNBC Shift show Changing America, wrote an op-ed for NBC, saying it was a smart move.

"Now more than ever, this is a time where Latinos need to band together to stand up for our rights," he said.

For him, the name La Raza created a distraction from the work the group does.

"Many critics of the organization have taken the literal meaning of the word and have tried to twist it to some moniker of racial superiority or saying that Mexicans wanted to take back the Western U.S.," he said.

But for some, dropping La Raza felt like the organization was turning its back on its community. For 26-year-old Maricela Monroy of Milwaukee, La Raza has a meaning beyond ethnicity.

"La Raza for me when I was growing up was like, the people that are up at 5 a.m. trying to get jobs, the people cleaning the stores, the people picking the food. You know, the working-class folks," Monroy said.

Monroy was shocked when she heard news of the name change, especially since political tensions are running so high under the Trump administration.

"Right now a lot of the Latino and immigrant community, we clearly feel under attack. So in circumstances like that we would expect Latino groups and immigrant groups to take a firm stance and to go on the offensive. This is the exact opposite of that."

"Part of the name change includes a slight erasure of their connection to the history of the Chicano movement, which is difficult for me because I really think it should be tied to the history," he said.

But UnidosUS President and CEO Janet Murguia says the organization is aiming to reach a larger Latino community. Times are changing, and so are the demographics.

"We're not the same Latino community that existed from 1968, when we began," said Murguia.

The organization conducted research and found that many felt strongly about the mission, but not the words "La Raza." She said Latinos today are younger and more diverse, so dropping the phrase was meant to include more people.

Twenty-three-year-old Luz Martinez is an Afro-Puerto Rican woman who was raised in Mississippi. She says "La Raza" didn't connect with her.

"The term 'La Raza' is something that not everyone has been able to relate to, particularly people of Caribbean descent like me, or Afro-Latinos — it's not a term that we use."

But Martinez also says that with or without the name change, millennials aren't very familiar with the organization in the first place.

As part of its re-branding, UnidosUS says it plans to address this challenge by expanding social media and exploring different outreach avenues. For Murguia, this change is about more than just a name.

"We want to make sure that people see this change as not just about a brand, but about increasing the power and influence of our community and growing those who can be included in our mission along the way."