Accessibility links
Detroit 1967: There's Still A Debate Over What To Call It : Code Switch The unrest in the Motor City a half-century ago this summer left 43 dead. It was one of the most devastating episodes of civil conflict in the 20th century. But was it a riot or a rebellion?

Detroit 1967: There's Still A Debate Over What To Call It

Detroit 1967: There's Still A Debate Over What To Call It 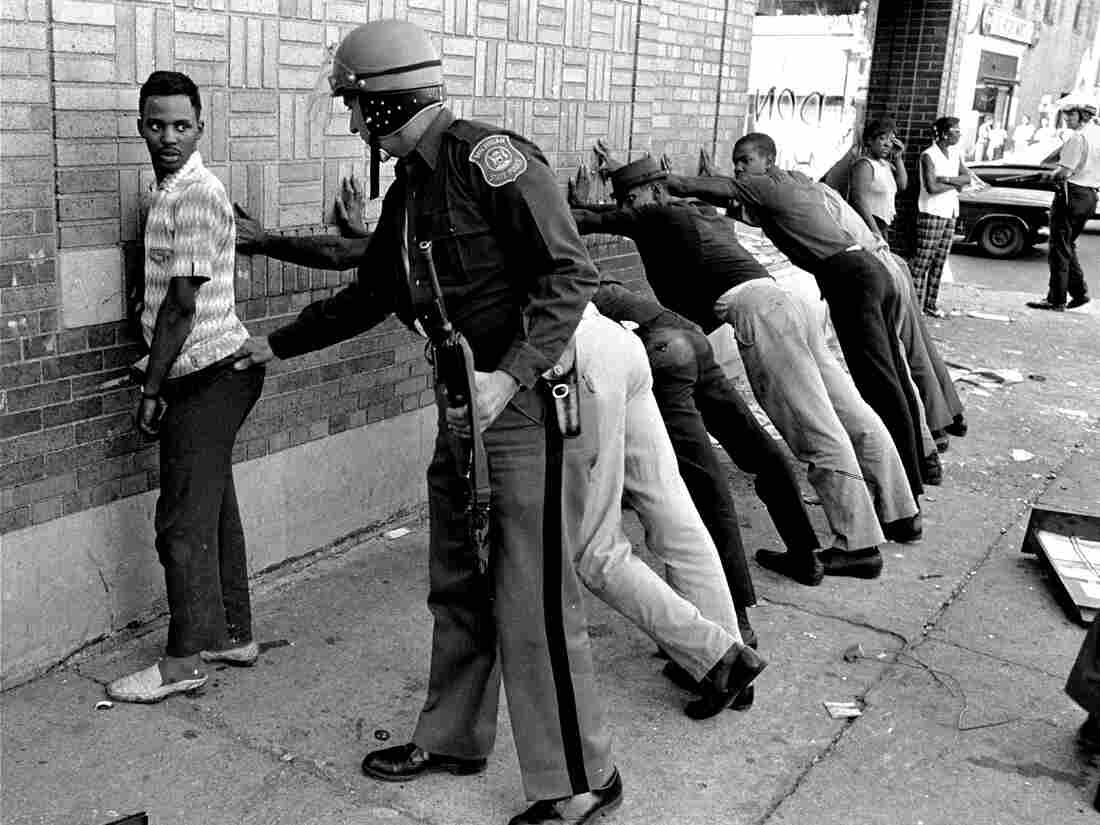 In this photo from July 24, 1967, a police officer searches a youth on Detroit's 12th Street. AP hide caption 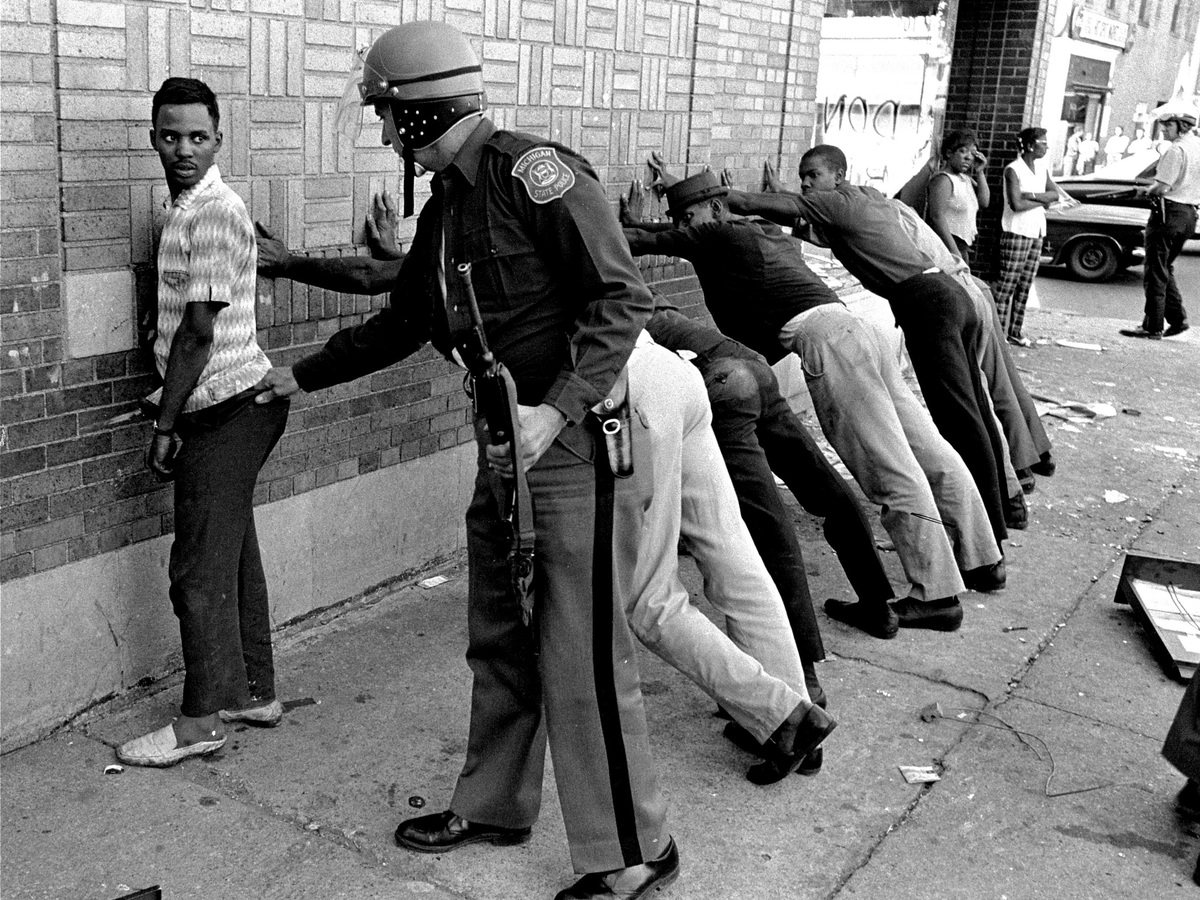 It was after 3 a.m. on a Sunday: July 23, 1967. A group of African-Americans were celebrating the return of two Vietnam veterans. They were in what Detroiters call a "blind pig," an after-hours bar, at the corner of 12th Street and Clairmount Avenue. Just before dawn, police raided the bar and began arresting the more than 80 people inside.

"As they were being led into the paddy wagon, a crowd gathered," says Bill McGraw, a veteran journalist now retired from the Detroit Free Press who has written about the events of that night and its aftermath extensively. "At first, the crowd was friendly, but it took so long to remove the people in custody that the tone changed gradually. ... It started becoming anti-police."

McGraw says people started throwing rocks and bottles as cops drove off with the last of those arrested. Windows were shattered and looting began. Burglar alarms went off, sirens rang in the distance and fires broke out.

What began as a common police raid had morphed into a full-on crisis. Over the course of five days, thousands of people took to the streets. Rampant looting, arson and violence destroyed many of Detroit's neighborhoods and communities.

Entire police and fire departments, state troopers, U.S. Army paratroopers, and Michigan National Guardsmen — eventually about 17,000 people in all — were deployed to contain the crisis. 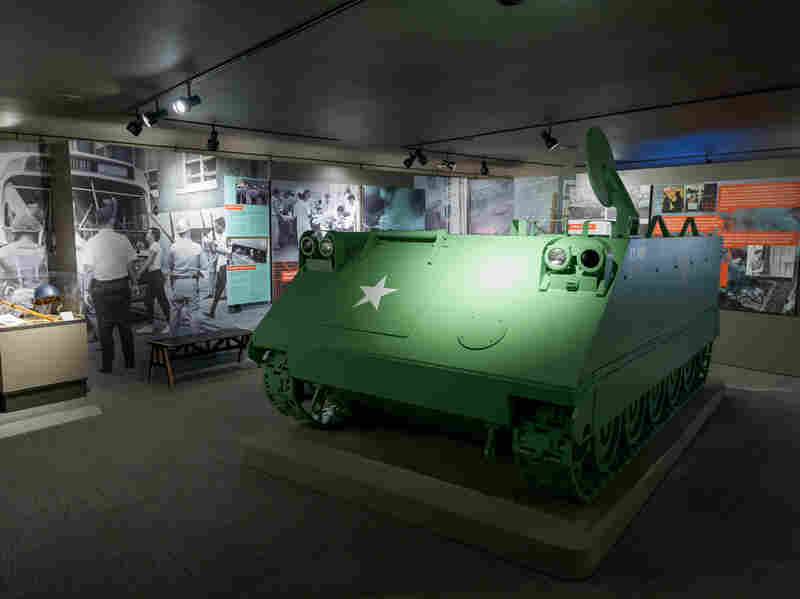 The exhibit, "Detroit 67: Perspectives," examines the unrest in the city in the summer of 1967. Chuck Cloud for Elayne Gross Photography/Courtesy of the Detroit Historical Society hide caption 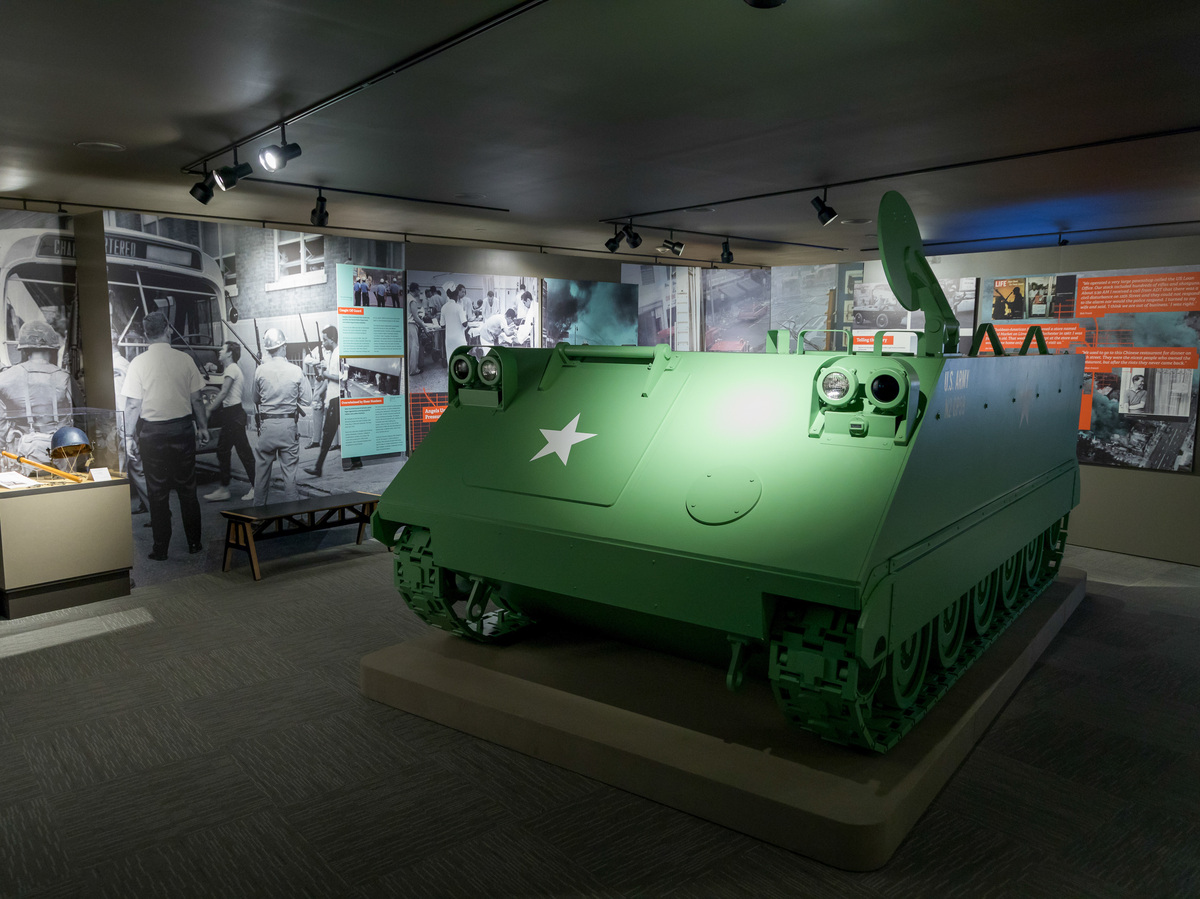 The exhibit, "Detroit 67: Perspectives," examines the unrest in the city in the summer of 1967.

By July 28, 43 civilians had been killed, 33 of them African-American. More than 1,000 people were injured; over 7,000 arrested. Thousands of buildings were destroyed, many of which were never rebuilt.

The event is often referred to as a "boiling point" of racial and economic inequality in the city. And at its center was tension between the police and black Detroiters.

"There was an undeniable sense that the police were there to protect some, and to contain and intimidate others," says Scott Kurashige, who teaches American and ethnic studies at the University of Washington Bothell. He notes in his book The Fifty-Year Rebellion: How the U.S. Political Crisis Began in Detroit that in 1967, 95 percent of the Detroit police department was white.

While many of the facts of that week have long been documented by historians, one big question remains: What should the chaos of that summer be called?

"Everybody who saw this, everybody who heard these stories has a different take on exactly what happened," says Joel Stone, senior curator at the Detroit Historical Society. "Drawing all these different perspectives together, we realized everybody had a different term for it, too."

Last month, the museum opened an exhibit titled "Detroit '67: Perspectives," part of a massive community engagement project that's gathered over 400 oral histories of people who were there or have been living in the city since 1967.

Part of the exhibit explores the tension around what to call the July '67 events. Before they walk in, visitors are asked: "What do you call it?" Responses range from riot to revolution.

The most common term to describe what happened is "riot." On July 24, 1967, the lead headline in the Free Press declared: Mobs Burn and Loot 800 Stores; Troops Move In; Emergency Is On.

President Lyndon B. Johnson used that term when he authorized the use of federal troops in Detroit. Johnson reminded Detroiters that this show of force was necessary to "firmly to show by word and by deed that riots, looting and public disorder will just not be tolerated."

While Joel Stone says that most visitors start the exhibit calling it a riot, once they learn more about what led up to those events, they end up calling it an "uprising" or "rebellion."

Patrina Chatman calls it a rebellion. She's the curator of the exhibit "Say It Loud: Art, History, Rebellion" at the Charles H. Wright Museum of African American History in Detroit.

"A rebellion is a situation where people are at the end of their ropes, so to speak," she explains. "They have talked about the problems they are experiencing and all of their concerns fall on deaf ears. After a while, it boils over."

Others, like life-long Detroiter Lamont Causey, still call it a riot. Causey is African-American and grew up on 12th Street (now Rosa Parks Boulevard) and was 8 years old in July 1967. He now heads the nonprofit community organization, Brother Always Together.

"How can you push back when we were being slaughtered?" he asks. "We were being shot and beat, so how can it be a rebellion? What would be called burning down our own city? When they say 'rebel': Man, I get very frustrated. It was a riot."

Historian Scott Kurashige believes the debate over what to call the event is symptomatic of history's polarized response to the crisis of the 1960s: "To see it as a rebellion and to see it as linked to underlying economic and political concerns is to recognize the need for a very forward-looking political response."

Not long after the riot, the site of the "blind pig" and most of the surrounding buildings were demolished. The only nearby landmark left is Gordon Park. Last week, the city commemorated the July '67 events by unveiling a historic marker. It avoids terms like "riot" or "rebellion." Its title? "Detroit July 1967."