Accessibility links
Making Sense Of Charlottesville: A Reader's Guide : Code Switch The tragedy in Virginia has sparked compelling writing around the country, and around the Internet. Here's our roundup. 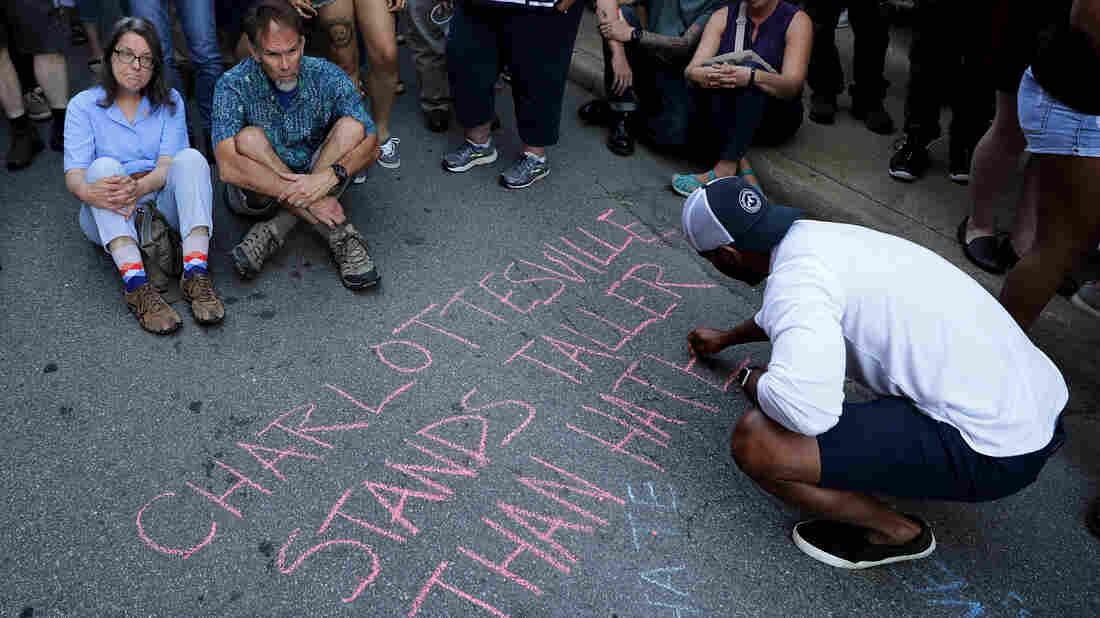 Hundreds of people gather for a vigil on the spot where 32-year-old Heather Heyer was killed when a car plowed into a crowd of people protesting against the white supremacist "Unite the Right" rally in Charlottesville, Va. Chip Somodevilla/Getty Images hide caption 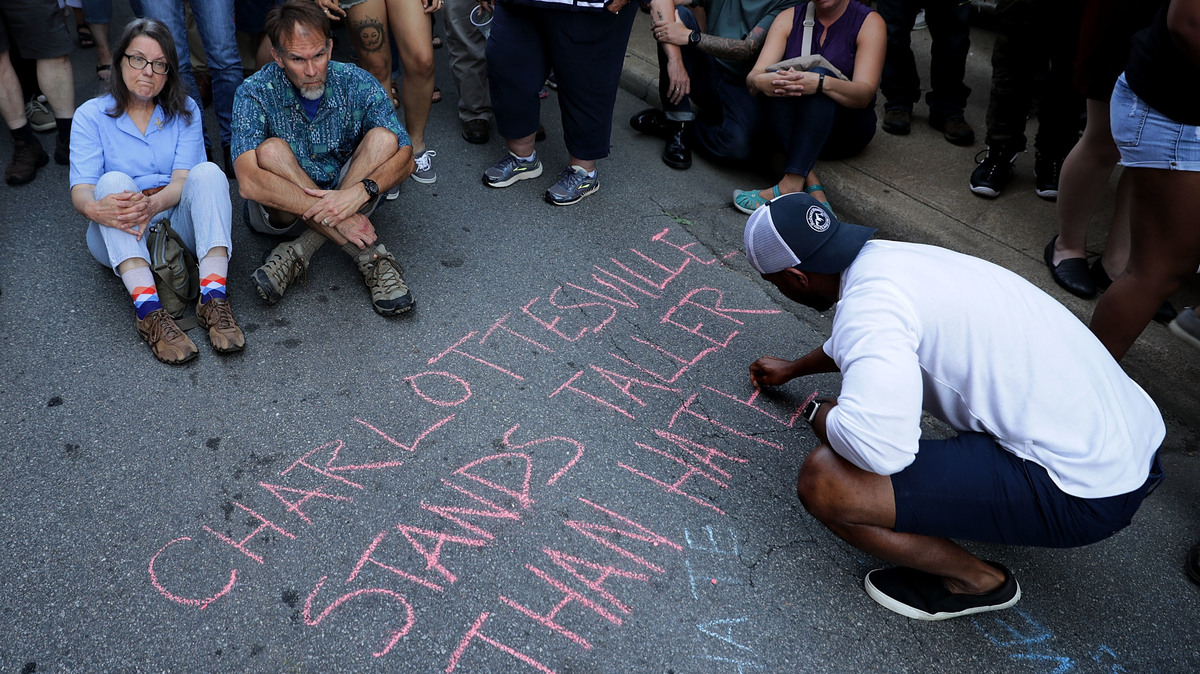 Hundreds of people gather for a vigil on the spot where 32-year-old Heather Heyer was killed when a car plowed into a crowd of people protesting against the white supremacist "Unite the Right" rally in Charlottesville, Va.

A rally with white nationalists chanting phrases like "Jews will not replace us" and "end immigration, one people, one nation" was, as many expressed online, disturbing yet not really all that surprising.

Within hours of the tragedy in Charlottesville, journalists, scholars and other leading voices weighed in around the Internet, with analysis and deeper understanding of how this unfolded.

Below are some of the most revealing pieces we read.

Here at Code Switch, my teammate Gene Demby wrote about about how white nationalists are edging their movement out of the shadows:

"Richard Spencer, the white nationalist leader and University of Virginia alum who coined the term 'alt-right,' would likely count that openness as its own incremental success. 'If you greeted someone in 1985 and you said, 'all gays should marry,' you actually would get a lot of laughs,' Spencer told The Atlantic last year, not long after the election. 'By 2015, gay marriage is popular. What is possible has shifted. That's what the alt-right is doing. It's shifting the reality of what's possible, and imagining a reality in which they are.' "

Code Switch alum Matt Thompson, now executive editor at The Atlantic, riffed on the brazenness of the white supremacists who marched this weekend, compared with Klan members of decades past who hid under white hoods. "The shameless return of white supremacy into America's public spaces seems to be happening by degrees, and quickly," Thompson wrote.

Dara Lind, a reporter at Vox who wrote an explainer of the rally and its origins, described it as a "coming-out party for resurgent white nationalism in America."

Nathan Guttman, a reporter with Forward, an online news site aimed at Jewish Americans, penned a vivid piece about covering the march. He recounted watching as Spencer launched into a rant about the mayor of Charlottesville, Michael Signer.

" '[L]ittle Mayor Signer — SEE-NER — how do you pronounce this little creep's name?' asked Richard Spencer, a right-wing leader who dreams of a 'white ethnostate,' as he stood on a bench under a tree to rally his troops, deprived of their protest.

The crowd knew exactly how to pronounce his name: 'Jew, Jew, Jew, Jew' some shouted out. The rest burst out in laughter. And that was one of the only moments of levity the alt-right audience gathered under the tree enjoyed."

And Jia Tolentino, a writer for The New Yorker and a graduate of the University of Virginia, meditated on Charlottesville's progressive guise and ability to hide its dark racial past. "While I was at U.V.A., the fact that slaves had built the school was hardly discussed, and the most prominent acknowledgment that Jefferson was a slave owner came on Valentine's Day, when signs went up all over campus that said 'TJ ♥s Sally.' "

Many writers also took on the response from President Trump, whose initial reaction to the violence in Charlottesville criticized equally both sides of the protest. "We condemn in the strongest possible terms this egregious display of hatred, bigotry and violence on many sides," Trump said, in remarks that brought condemnation from both Democrats and Republicans.

"We have seen a great number of false equivalencies in the past two years, and the most recent Presidential election was defined by them. Yet it remains striking to hear Trump imply that Nazis and the interracial group of demonstrators who gathered to oppose them were, in essence, equally wrong.

It would have been naïve to expect the President to unambiguously condemn neo-Confederates ("Heritage, not hate," etc.), but Nazis? For reasons that are not hard to discern, the swastika, at least in the United States, has always been more clearly legible as a symbol of racial bigotry than the Confederate flag."

Michael Gerson, a former speechwriter for President George W. Bush, lambasted Trump in a Washington Post piece, writing that the current president was "incapable" of speaking for the nation in the face of tragedy:

"If great words can heal and inspire, base words can corrupt. Trump has been delivering the poison of prejudice in small but increasing doses. In Charlottesville, the effect became fully evident. And the president had no intention of decisively repudiating his work.

On Monday, Trump responded to the increasing pressure to react more forcefully, and gave a stronger rebuke. "Racism is evil," Trump said. "And those who cause violence in its name are criminals and thugs, including the K.K.K., neo-Nazis, white supremacists and other hate groups that are repugnant to everything we hold dear as Americans."

In a piece for Commentary Magazine, John Podhoretz, a former speechwriter for Presidents Ronald Reagan and George H.W. Bush, cast a skeptical eye toward Trump's remarks on Monday:

"You can choose to have whatever opinion you have on the president's statement today condemning white supremacists, but it's hard to believe he would have read it out if he'd had his druthers. No, the real Donald Trump was the one we saw on Saturday when he decided to condemn violence 'on many sides' in response to the deliberately provocative and intentionally violent neo-Nazi march in Charlottesville, Virginia; when he decided to refer to the events as 'sad' in tweets; when he wished 'best regards' to those injured by the car that was deliberately smashed into them, killing 1 and injuring 20. When he acted in that way, he was operating according to his instinct. And his instinct said: Do not attack the white supremacists."

What Trump's comments Monday mean for how, exactly, he will handle the resurgence of white supremacists, remains unclear.

As Maggie Haberman of The New York Times tweeted shortly after Trump's remarks on Monday:

If ever there was a time for POTUS to stand and take questions, this was it. Took questions on his NoKo statements, etc. Not this.