Accessibility links
The Trickle-Up Theory Of White Nationalist Thought : Code Switch Dressed up as academic reasoning, racist tropes pushed by white identity advocates become more palatable, allowing those ideas to move from the fringes of debate to the political mainstream. 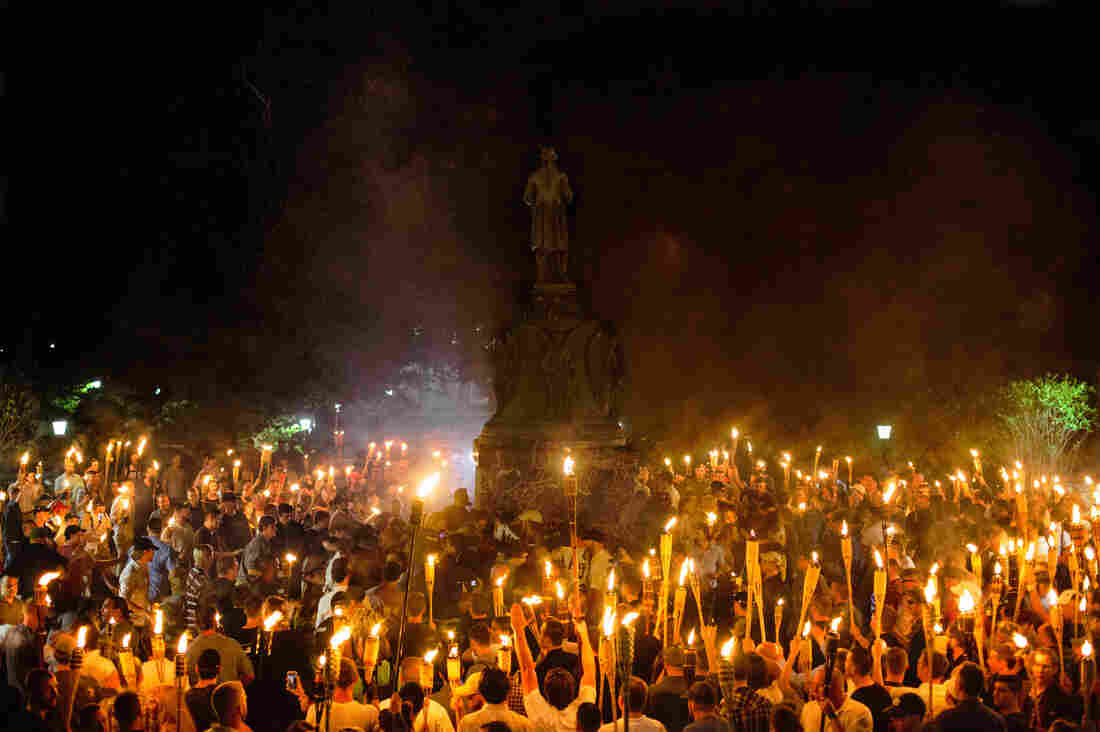 Neo-Nazis, white supremacists and other demonstrators encircle counterprotesters at the base of a statue of Thomas Jefferson on the University of Virginia campus in Charlottesville, Va., on Friday. NurPhoto/Getty Images hide caption 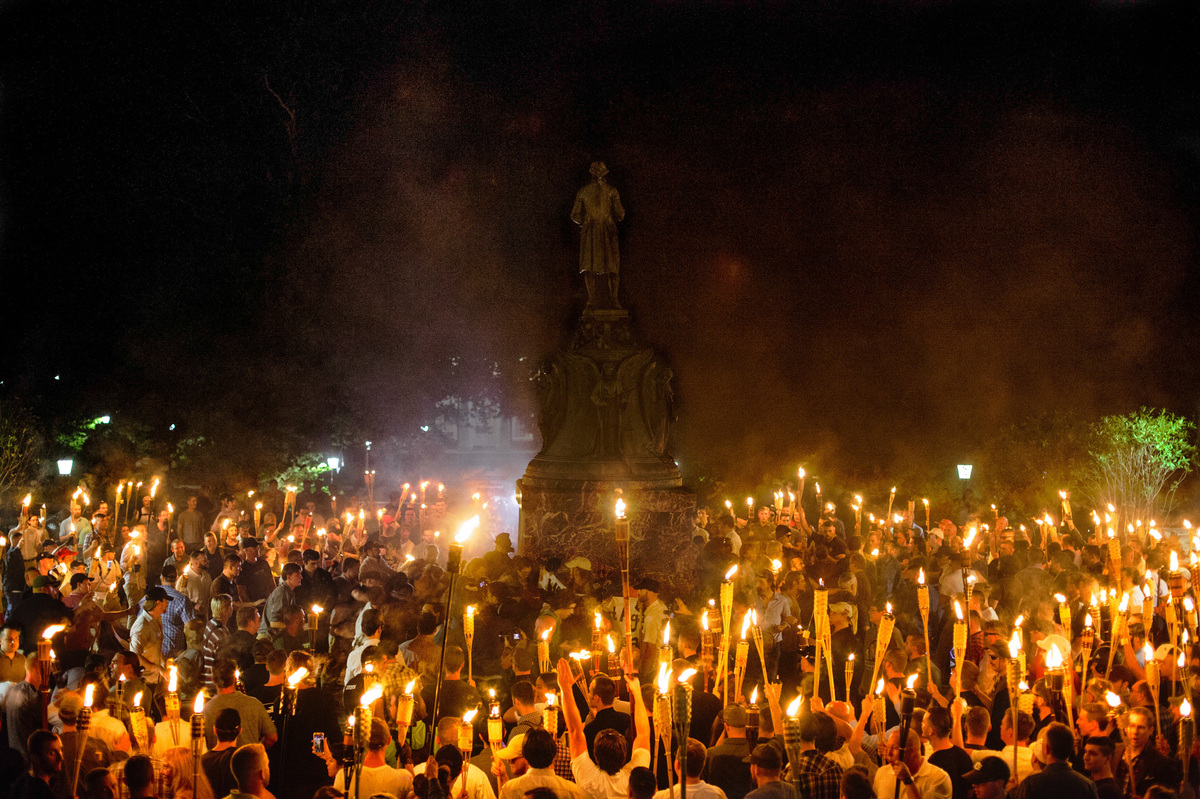 Neo-Nazis, white supremacists and other demonstrators encircle counterprotesters at the base of a statue of Thomas Jefferson on the University of Virginia campus in Charlottesville, Va., on Friday.

Jared Taylor was not in Charlottesville, Va., on Saturday. But Taylor, one of the leading voices for white rights in the country, says it was clear what really happened at that rally.

"Anyone who wishes to speak in the name of whites is subject to the heckler's veto," said Taylor, founder of the white advocacy website American Renaissance. "There would have been no violence, no problems of any kind if people had not shown up as counterdemonstrators, many of them wearing helmets, wielding batons, wearing shields, shouting for the death of the demonstrators. ... This is not something that was provoked by the presence of racially conscious whites. It was something that was provoked by people who hate any white person who has a racial consciousness."

Two days later, President Trump, in one of his most controversial press conferences to date, described the events — at which hundreds of white protesters gathered for the so-called "Unite the Right" rally and after which a white nationalist sympathizer drove his car into a crowd, killing a counterdemonstrator — in a similar way.

"Let me ask you this," Trump told reporters Tuesday. "What about the fact that [counterdemonstrators] came charging, with clubs in their hands, swinging clubs? Do they have any problem? I think they do. ... You had a group on one side that was bad and you had a group on another side that was also very violent. And nobody wants to say that. But I'll say it right now."

Taylor is among a group of educated, white-identity advocates who, critics say, normalize the ideas of white supremacy by couching them in language that doesn't sound overtly racist. In doing so, those critics say, people like Taylor, authors Kevin MacDonald and Peter Brimelow, and "Unite the Right" organizers Jason Kessler and Richard Spencer sanitize racist tropes to make them palatable to a broad audience, including the upper reaches of the political mainstream.

"I think that it's true that ultimately a lot of these ideas travel all the way from the farthest fringe of the political world, ultimately to the very top in some kind of form," said Mark Potok, former editor of Intelligence Report, the Southern Poverty Law Center's journal monitoring extremism. 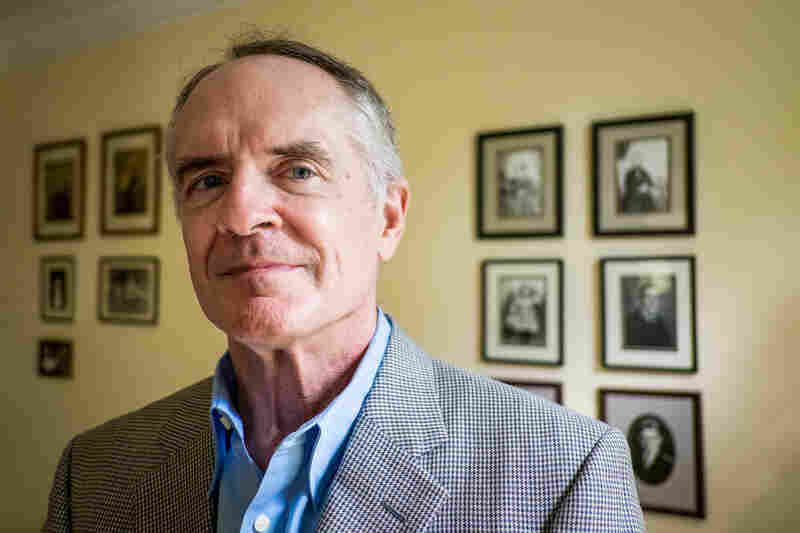 Jared Taylor is the founder of American Renaissance, a website that he says is among the "many websites and organizations that speak in the name of whites." Pete Marovich/The Washington Post/Getty Images hide caption 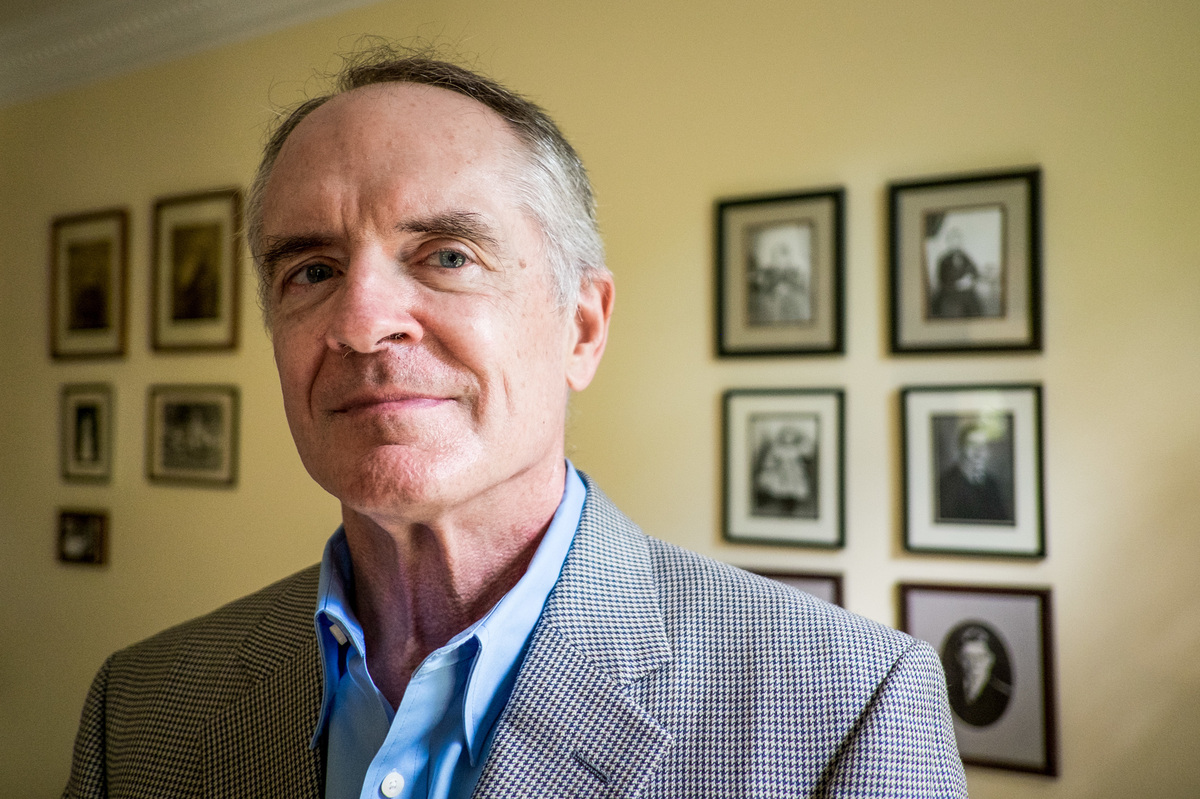 Jared Taylor is the founder of American Renaissance, a website that he says is among the "many websites and organizations that speak in the name of whites."

The white protesters in Charlottesville came, among other things, to contest the removal of a statue of Confederate Gen. Robert E. Lee. They were there, Taylor said, "to pursue their destiny free of the unwanted influence of others. This is not a hateful thing."

Some wore swastikas. Others carried torches and Confederate flags. David Duke, a former grand wizard of the Ku Klux Klan, made a speech. Videos from Friday and Saturday show marchers chanting: "Jews will not replace us!" and "blood and soil," a Nazi slogan. Later, 20-year-old James Alex Fields Jr. allegedly drove a car into a crowd, killing counterdemonstrator Heather Heyer.

Taylor called Heyer's death "a terrible, murderous act" that "no one would defend." He said he is not associated with "Unite the Right" and didn't agree with the decision some people made to wear swastikas. As founder of American Renaissance, which he says is among the "many websites and organizations that speak in the name of whites," Taylor claims that there is no place for bigotry or hate in his ideology.

But the ideas that people gathered to defend over the weekend — that the United States was founded as a white, Christian nation and should remain so; that white people face an existential threat by becoming a racial minority; that there are biological differences among racial groups that make some more intelligent and others more prone to criminality — those are ideas that Taylor has been working to legitimize for decades.

"All of these characters, Peter Brimelow, Kevin MacDonald, Jared Taylor, say they're terribly opposed to violence and, of course, would never engage in that kind of a thing," says Potok. "Well, that's very nice and very fine and the words are very pretty. But the reality is that these people provide the ideological foundation for people who are not so careful in what they say and do. People who are actual terrorists."

Potok and others say that Brimelow offers such an ideological foundation with his book, Alien Nation: Common Sense About America's Immigration Disaster, and his website, VDARE, where he says he'll publish "anyone who has anything critical to say about immigration, environmentalists, progressives, etc."

On Saturday, Brimelow published his own take on the events in Charlottesville, calling it a "remarkable torchlight procession." He has published articles by fellow white-rights advocates Spencer, Kessler and MacDonald.

Marilyn Mayo of the Anti-Defamation League once described MacDonald as the country's "foremost anti-Semite, next to David Duke."

MacDonald is the editor-in-chief of The Occidental Observer and a former professor who left California State University, Long Beach, after coming under fire for his controversial writings. He is also one of the directors of the American Freedom Party — an anti-gay, anti-feminist political party that supports deporting any American who became a citizen after 1965.

MacDonald is celebrated among neo-Nazis for a trilogy of books he published in the 1990s that trade in some of the most pernicious stereotypes about Jewish people, all under the guise of researching their evolutionary biology.

In Charlottesville, White Nationalists Try To Seize An Elusive Spotlight

The difference between Duke and MacDonald, Mayo said, is that Duke was largely ostracized from mainstream society for his public racism, whereas MacDonald's work was bolstered by the credibility of his university position.

MacDonald, she says, "couches his anti-Semitic views as legitimate intellectual inquiry. That's something that might make him more acceptable to people."

It's hard to put numbers on how many people Taylor, Brimelow, MacDonald and others like them reach. The Internet provides a degree of anonymity to those who visit their websites. Membership in hate groups, Potok estimates, numbers around half a million people. But include those who believe that "the United States, as well as a lot of European countries, were created 'by and for whites and ought to return to being that,' " he adds, and "you're looking at a group of several million people, if not more." 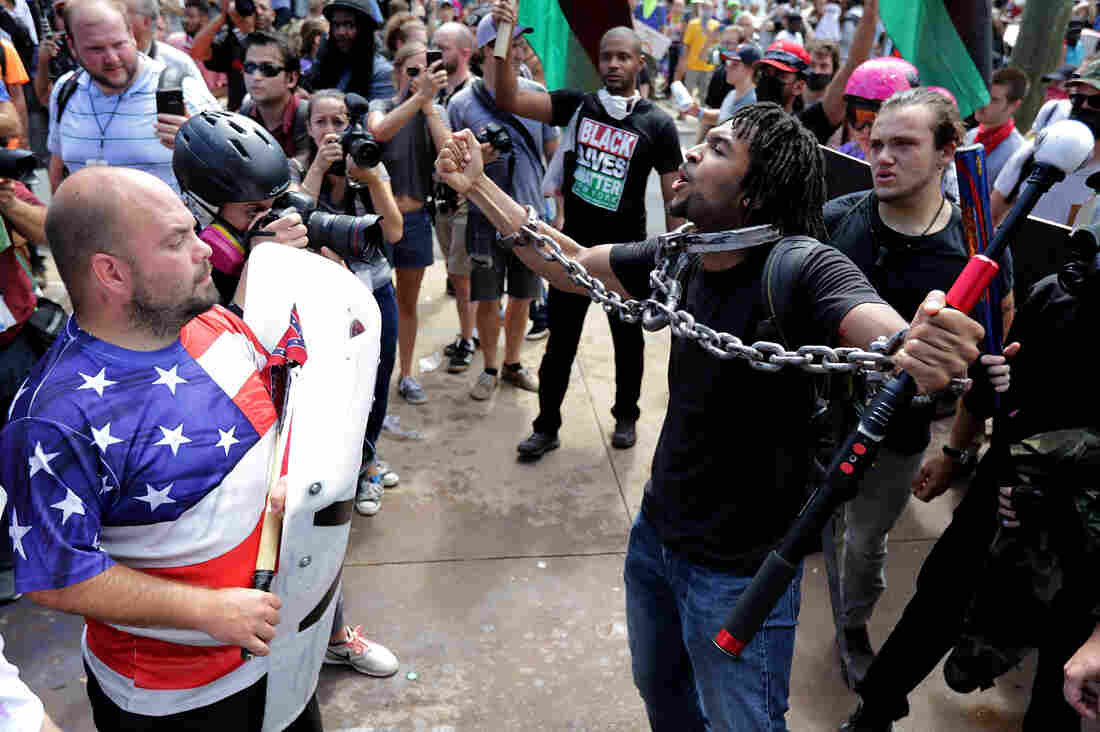 White nationalists, neo-Nazis and members of the "alt-right" face off against counterprotesters during the "Unite the Right" rally on Saturday in Charlottesville. Chip Somodevilla/Getty Images hide caption 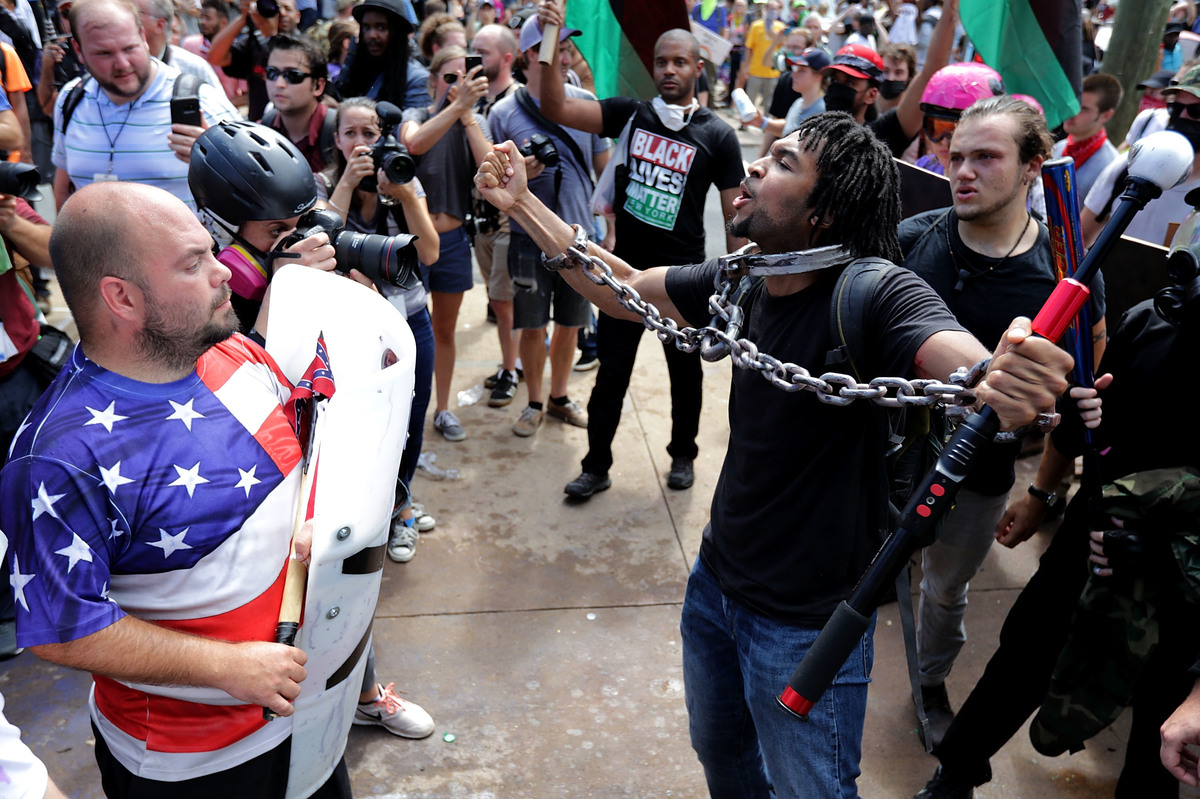 White nationalists, neo-Nazis and members of the "alt-right" face off against counterprotesters during the "Unite the Right" rally on Saturday in Charlottesville.

MacDonald said the organizers of Saturday's rally had misstepped; that the swastikas and other Nazi symbols should have been banned. "Because that stuff is never going to appeal to a wide swath of white Americans," he said. "It's simply not. And you're in a political arena. You have to do what's possible and what sells. And so you have to be very cautious about that kind of thing. And I don't think the organizers were."

But as for the basic message from "Unite the Right," MacDonald was on board. The marchers on Saturday were trying to convey "that whites should be able to have their own identity and a sense of their own interests like anybody else," he says. White people in the U.S. may not be ready to accept that message now, he adds, but they will be in the future "as whites become more and more of a minority in the coming years. So I think we're ahead of the curve."

On that last point, MacDonald and Potok meet.

"We're seeing the continuing normalization of these ideas," Potok said. "I think there is a real kind of conveyor belt we have seen develop over the last few years, and even the last few decades."

Ideas start in a tiny radical fringe group somewhere, he explains. And then they travel to larger and more moderate groups — but still outside the political mainstream.

"And then they are picked up by the Drudges of the world, by the Breitbarts of the world, by those kinds of websites and 'news organizations.' And within, it seems, minutes, they will then be picked up and exploited by certain politicians ... It is terribly important not only to have people like Jared Taylor and Peter Brimelow providing a kind of ideological foundation, but also critically important, I think, to have people like Donald Trump, who are essentially helping to mainstream and normalize these ideas."

Accusations that Trump has been flirting with far right ideology have dogged him since before he was elected. During the campaign, Trump repeatedly distanced himself from people espousing white nationalism. He said multiple times that he disavowed the support of Duke and other white supremacists who endorsed his presidency.

But the president has been widely criticized since Saturday — by both detractors and supporters — for his responses to the events in Charlottesville. He first condemned the violence "on many sides," then gave a more direct rejection of racists, "including the KKK, neo-Nazis, white supremacists, and other hate groups," but then followed that with even more controversy.

At Tuesday's press conference, Trump clarified what he meant by "all sides." And it sounded remarkably similar to something MacDonald said over the phone on Monday afternoon.

"I'm not from the South. I understand they have a history and a heritage, and they don't want to just throw it all out. But that's what we're going to see. And it's not going to stop with General Robert E. Lee statues. It's going to continue with Thomas Jefferson, George Washington, all those people, because they owned slaves, they will eventually be removed, I think. It's just the beginning."

And here is Trump on Tuesday:

"Not all of those people were white supremacists by any stretch. Those people were also there because they wanted to protest the taking down of a statue of Robert E. Lee. ... So this week it's Robert E. Lee. I noticed that Stonewall Jackson's coming down. I wonder, is it George Washington next week? And is it Thomas Jefferson the week after? You really do have to ask yourself, where does it stop?"