Accessibility links
Tracing The Dark Origins Of Charlottesville's KKK : Code Switch In the comments of residents processing what happened in Charlottesville, a common refrain emerged: "This is not us." But the city's history tells a different story. 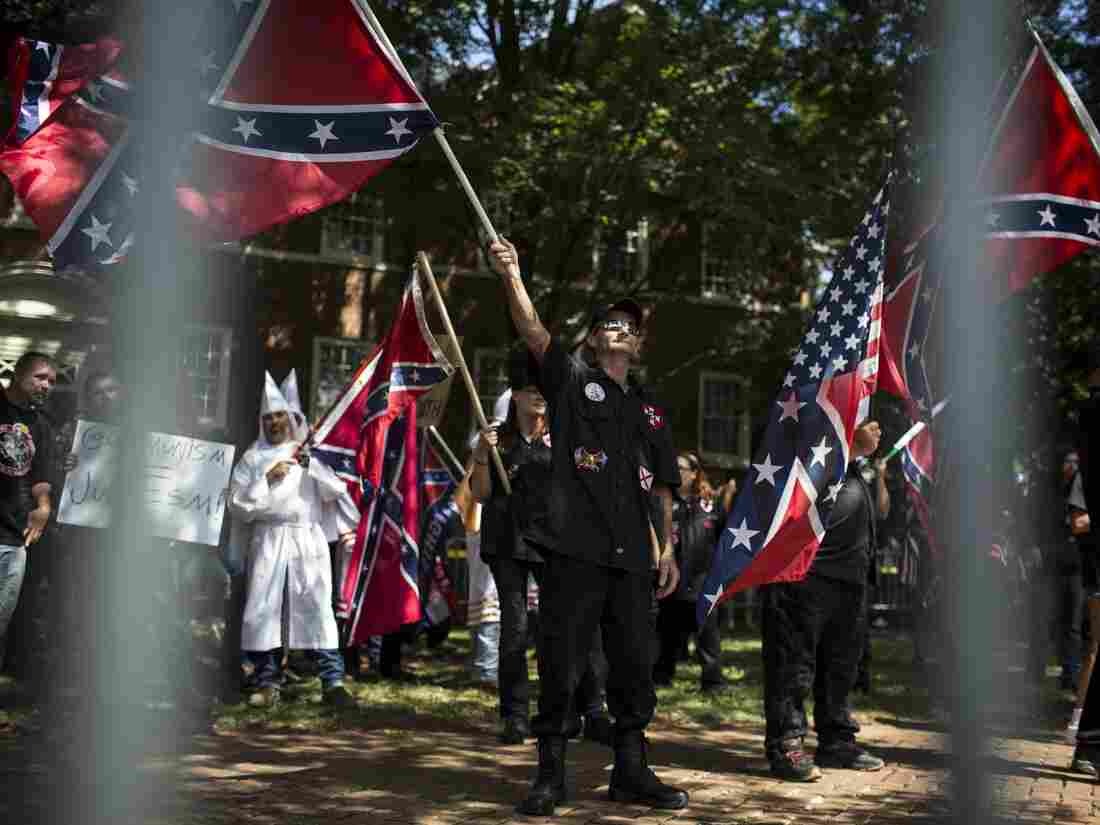 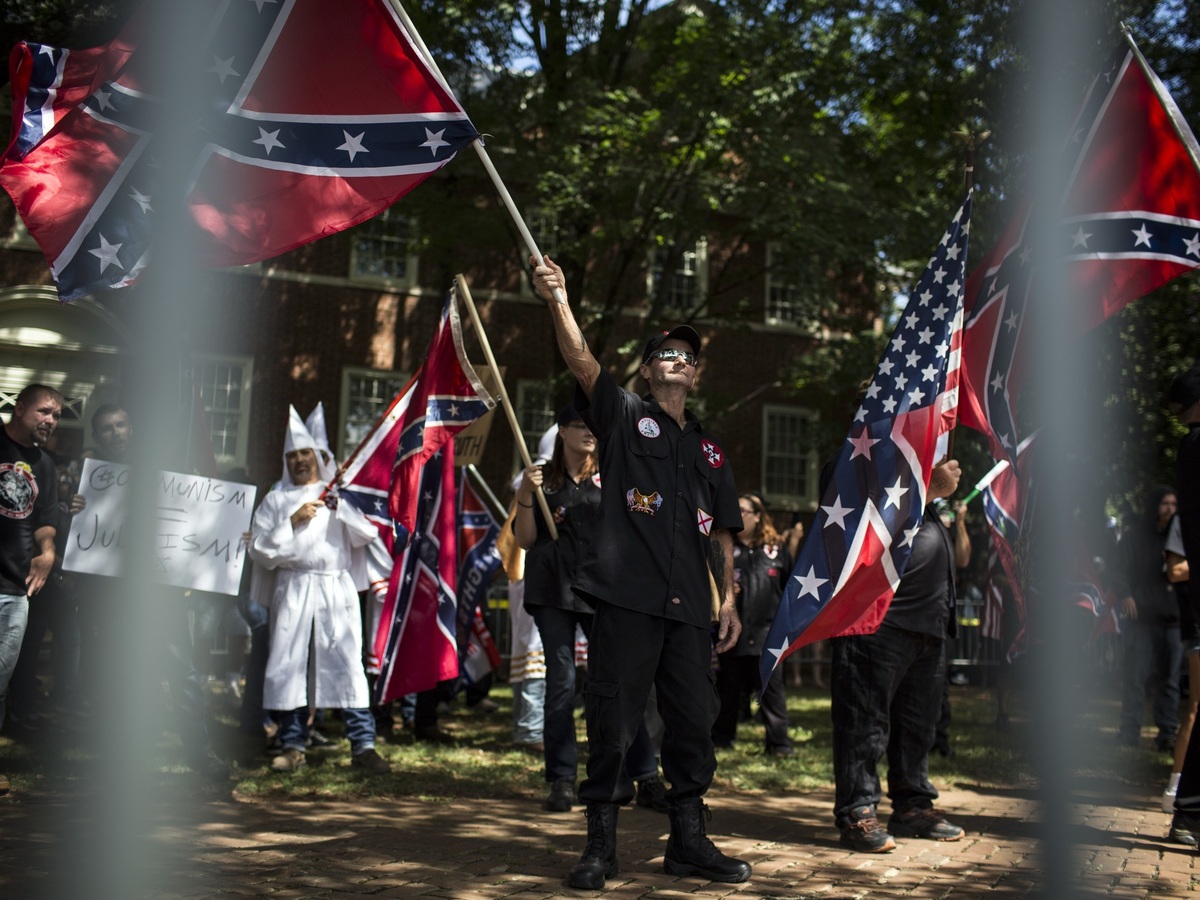 The front page of The Daily Progress, Charlottesville's local paper, on June 28, 1921, offers a mix of local minutiae folded in with larger news.

And then, right up near the top, bordered with teeny asterisks, is this headline: "KU KLUX KLAN ORGANIZED HERE."

What follows is this reverential, two-paragraph recounting of the local Klan's birth:

"The spirit of Gen. Nathan Bedford Forrest hovered over Charlottesville recently, and the fiery cross, symbolic of the Invisible Empire and of the unconquered and unconquerable blood of America, cast an eerie sheen upon a legion of white robed Virginians as they stood upon hallowed ground and renewed the faith of their fathers.

"Which is by way of saying that the Ku Klux Klan has been organized in this city. Hundreds of Charlottesville's leading business and professional men met around the tomb of Jefferson at the midnight hour one night last week and sealed the pledge of chivalry and patriotism with the deepest crimson of red American blood. It is said that the reorganization of the Klan is proceeding rapidly throughout the State, the South and the Nation."

It was the first of many articles from The Daily Progress about the Charlottesville KKK and its activities.

After events like what happened this past weekend in Charlottesville, I always find it instructive to look back at history and how people and ideologies were framed then — and how people see or don't see them today.

Scrolling through tweets and posts of folks processing the "Unite The Right" rally and the violence afterward, a common refrain emerged: "This is not us."

It's well-intended and meant to spurn the racism and violence that occurred last weekend. But it also glosses over a history of racism in the city stretching back more than a century.

Take, for example, the Charlottesville KKK's relationship with the University of Virginia when the local Klan began in 1921. In that first year, the chapter made a $1,000 donation to the university. The Klansmen attached a note with the donation, the newspaper reported: "Filled with the deepest devotion to the university as an institution which inculcates virtue and fosters pure American patriotism." The president of U.Va. then responded with a "hearty thanks," the school's student paper reported at the time.

To this day, the university has yet to explicitly acknowledge the KKK's donation, according to Jalane Schmidt, a religious studies professor at U.Va.

I reached out to the university about whether it acknowledged the donation and, if so, what that the money was used for. A spokesman for the school said in an email: "The University of Virginia has acknowledged that controversy has been part of its history, and we continue to strive to learn from it and to improve our current environment through open and constructive dialogue."

And which of the city's "leading business and professional men" were secret Klan members? It's a question that has remained unanswered in the nearly 100 years since then, according to John E. Mason, a historian at the university. "It's all surmise and speculation," said Mason. "Was the editor [of The Daily Progress] one of those prominent officials? Who were they?"

Mason is a member of Charlottesville's Blue Ribbon Commission On Race, Memorials And Public Spaces, which released an extensive report in December 2016 to the city council, analyzing in great detail the city's legacies of slavery, Jim Crow and white supremacy.

Though it isn't clear whether the editor of the newspaper was a part of the Klan, the newspaper describes its own founder, James H. Lindsay, in 1901 as being of the "opinion that the education of the negro rather unfits him for the practical duties to which is called to his sphere."

And the newspaper was used as a tool to recruit more Klan members. In a bulletin published on July 19, 1921, it warned that "all undesirables must leave town" and extended this invitation: "If you are a man, we respect you. If you are 100 per cent American, we want you. Only native-born, white Americans ..."

"We do know that, for instance, the Sheriff of Albemarle County [C.M. Thomas] was a member of the Klan," Mason said "Because when he died, robed Klansmen placed a wreath on his grave."

By 1925, the reconstituted Ku Klux Klan had an overall national membership of between 2 million and 5 million members, according to Joshua Rothman, a history professor at the University of Alabama. He noted in The Atlantic last year that the Klan's members were disproportionately middle class and that it made many of its gatherings social.

"In some ways," Rothman wrote, "it was this superficially innocuous Klan that was the most insidious of them all."

"They are the great-grandparents and grandparents and parents of so many Charlottsevillians," Mason said. "They have deep roots in this town, and it's painful to think about that. The people who you went to church with, who pet your dogs ... they were also white supremacists."

This past June, Schmidt, from U.Va., urged a local historical society to release the identity of the donor who in 1993 gifted the society an old set of Klan robes. The society refused to reveal the name, presumably to protect the donor. "I think it's a public service that the public needs to know that stuff," Schmidt told me. She called the decision to keep the donor's identity secret a "failure of moral leadership — but sadly, fairly typical."