Accessibility links
'From The Mundane To The Magnificent': Photos From The Chicano Rights Movement : Code Switch From 1967 until 1977, photographers from La Raza chronicled Chicanos in and around Los Angeles. This month, the Autry Museum of the American West is sharing some of the most powerful images. 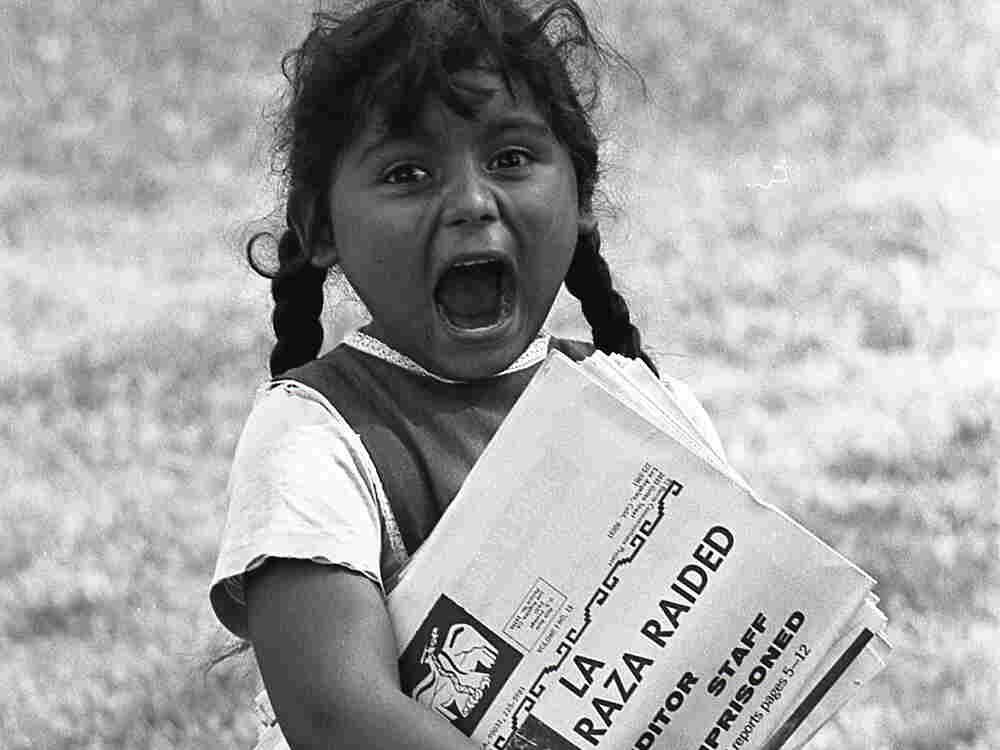 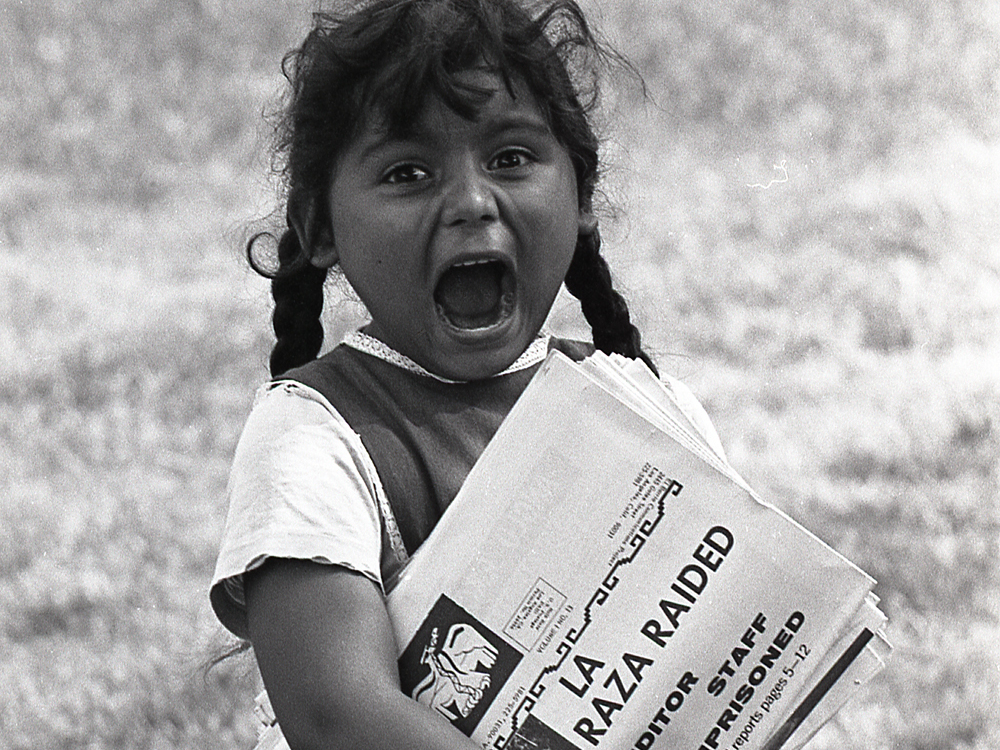 Ask Luis Garza how the La Raza exhibition came to be at The Autry Museum of the American West, and he raises his palms, eyes heavenward:

"Karma," he says. "Fate. Serendipity. The gods have chosen to align us at this moment in time."

Garza, who co-curated the exhibition with Amy Scott, is being a little dramatic, but he's not wrong. The country has finally started paying attention to Latino culture. Planning for Pacific Standard Time: LA/LA, a huge, international group of shows focusing on Latin American culture in the Americas and in Los Angeles, was underway, spearheaded by the powerful Getty Museum. And at about the same time, Garza and others had begun to review thousands and thousands of photographs taken during the Chicano Rights movement. Photographers from La Raza (literally "the race"), an activist newspaper-turned-magazine published from 1967-1977, chronicled Chicanos in LA and Southern California; it would become nationally significant. After the magazine shut down, the archives were eventually gifted to UCLA's Chicano Studies Research Center. Years later, the Center wondered if the Autry might be interested in doing something with them.

'From The Mundane To The Magnificent'

50 years ago, a Chicano publication named La Raza was launched as a newspaper, and chronicled a turbulent decade between 1967-1977, as young Mexican Americans in Southern California sought to empower their communities. The Autry Museum of the American West will unveil an exhibit on La Raza and the societal change it sought with a huge trove of previously unreleased photos that give a very nuanced portrait of a movement and its people. Opens 16 September, runs through 10 February 2019.

The Autry was. Rick West, the museum's president and CEO, jumped at the idea. The museum's mission, West says, "is to look at the cultures that make up the American West in a very inclusive and pluralistic way." The La Raza exhibition had all the elements.

"You have what was a very, very important moment 50 years ago in Latino/a history—the Chicano rights movement," West ticks off. "You had the voice that articulated that—the photographers of La Raza. And that voice was a first-person voice": photographers as witnesses. About 200 of the 25,000 (yes, that's not a typo) photographs are up on the Autry's walls. And they are only the tip of the visual iceberg. "The vast body of this work has never been seen, has never been printed—until now," Garza says.

"From the mundane to the magnificent"

The photos—all black and white—range from shots of homey gatherings (neighborhood barbecues, parades, playground scenes) to protests, demonstrations and boycotts. On one wall, a line of Mexican Americans stretches to the distant horizon. They're walking down a long dusty road waving banners and placards. Participants in La Marcha de la Reconquista covered almost 1,000 miles in a month. They started from Calexico, in California's Southern-most boarder, and walked to Sacramento to lobby the state government for several things, including improved conditions for farm workers, and an end to police brutality.

In another shot, a little girl walks with a huge sign that warns onlookers a local auto dealership engages in discriminatory labor practices. There are photos of high-school students during a convulsive series of walk-outs, as students protested the shabby education the Los Angeles school board thought was good enough for them. And a fetching picture of a bridal couple, still in their finery, who left church immediately after their vows and marched with the crowd to protest the inordinate numbers of Chicanos that had been drafted, injured and killed in the Vietnam War.

Most of the photographers were self-taught. Before he joined La Raza as a staff photographer, Garza apprenticed with a professional, learning exposures, lighting, composition and developing. When he went to the paper, he took those skills and shared them with others who wanted to shoot. "We were mentoring each other," he says now.

The exhibition shows they were quick learners. They're not all memorable photos, Garza says; there's a little of everything here. "You go from the mundane to the magnificent."

One of the most memorable was taken by one of a handful of women photographers. Maria Varela's portrait of a little girl hawking La Raza at the Poor People's Campaign in Washington, D.C. is a standout for its energy and its size—it's one of the photos that have been blown up into a stele-sized image.

Varela had a long and storied career as a Chicana who went south in the early 60s to photograph the Student Nonviolent Coordinating Committee, or SNCC, as volunteers worked to register black voters in Mississippi and Alabama. In 1968, she came to D.C. with a contingent of Chicanos who'd come to participate in several Poor People's Campaign marches. She doesn't remember the little paper girl's name, but she says, "This might have been the time that everyone emptied out to go up to Arlington Cemetery to honor Robert Kennedy, who had been assassinated two weeks before."

Although La Raza was the best-known of the Chicano newspapers, there were about 35 of them scattered across the US, from California to the Midwest, anywhere there were substantial Chicano populations. Sometimes travelers would carry an armload to Mexico or overseas, where they were snapped up. The pictures drew people in. The stories gave them ideas for organizing. And, Varela says, they served another, important purpose:

"This was our Facebook. This was our communication network. It was a little clunky, but it got the word out about what was going on in these individual communities."

The Autry Museum sits near several Latino communities, and the La Raza show may draw in people who've never crossed its threshold before. Some may be surprised to find faces they know in this exhibit—of long-lost friends, family, maybe even their own.

Luis Garza looks around the gallery and smiles. "That's the beauty of the power of photography," he says. "If one picture is worth a thousand words, how many are being said in this exhibition?"

Oh, and he might be right about that serendipity thing: La Raza opens to the public on September 16—Mexican Independence Day.

They Built Their Own Boating 'Shangri-La.' Preserving It May Be Just As Hard