Accessibility links
Goodbye, For Now, To A Vital Source For Native American News : Code Switch Indian Country Today Media Network announced it would "cease active operations." That leaves a big hole in news coverage by, and about, Native Americans. 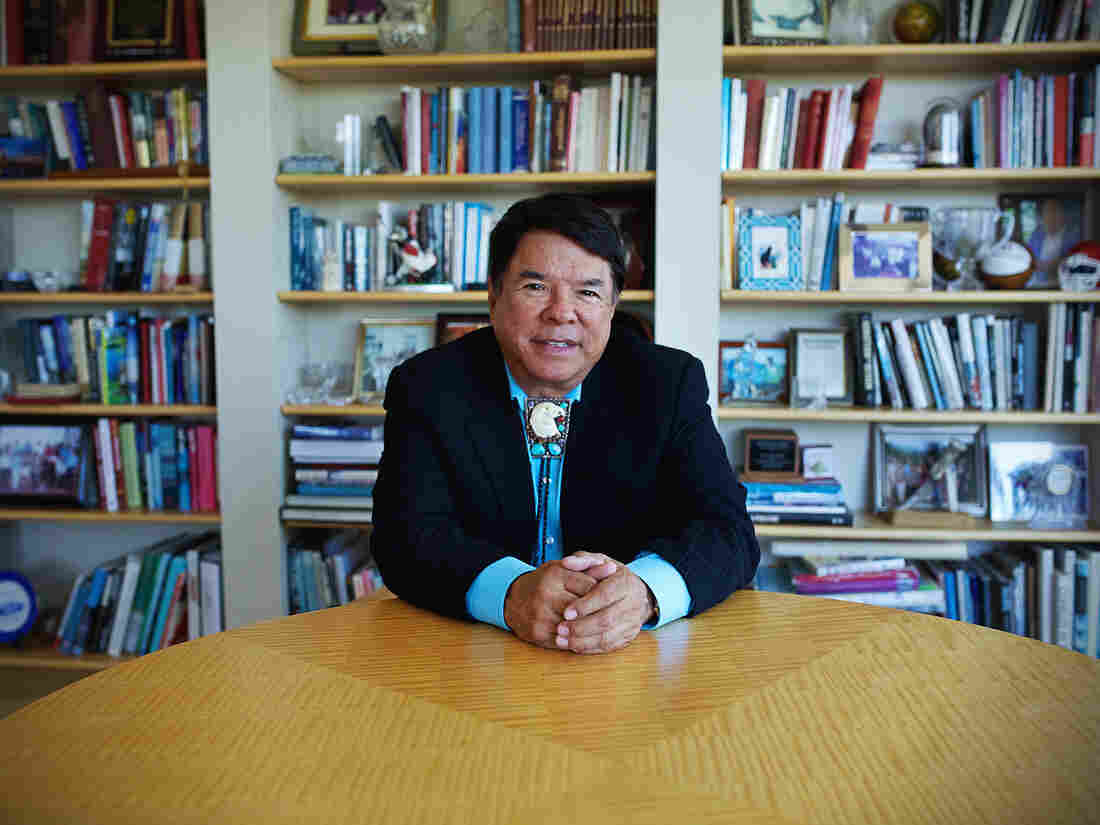 Ray Halbritter in his office. Courtesy of the Oneida Indian Nation hide caption 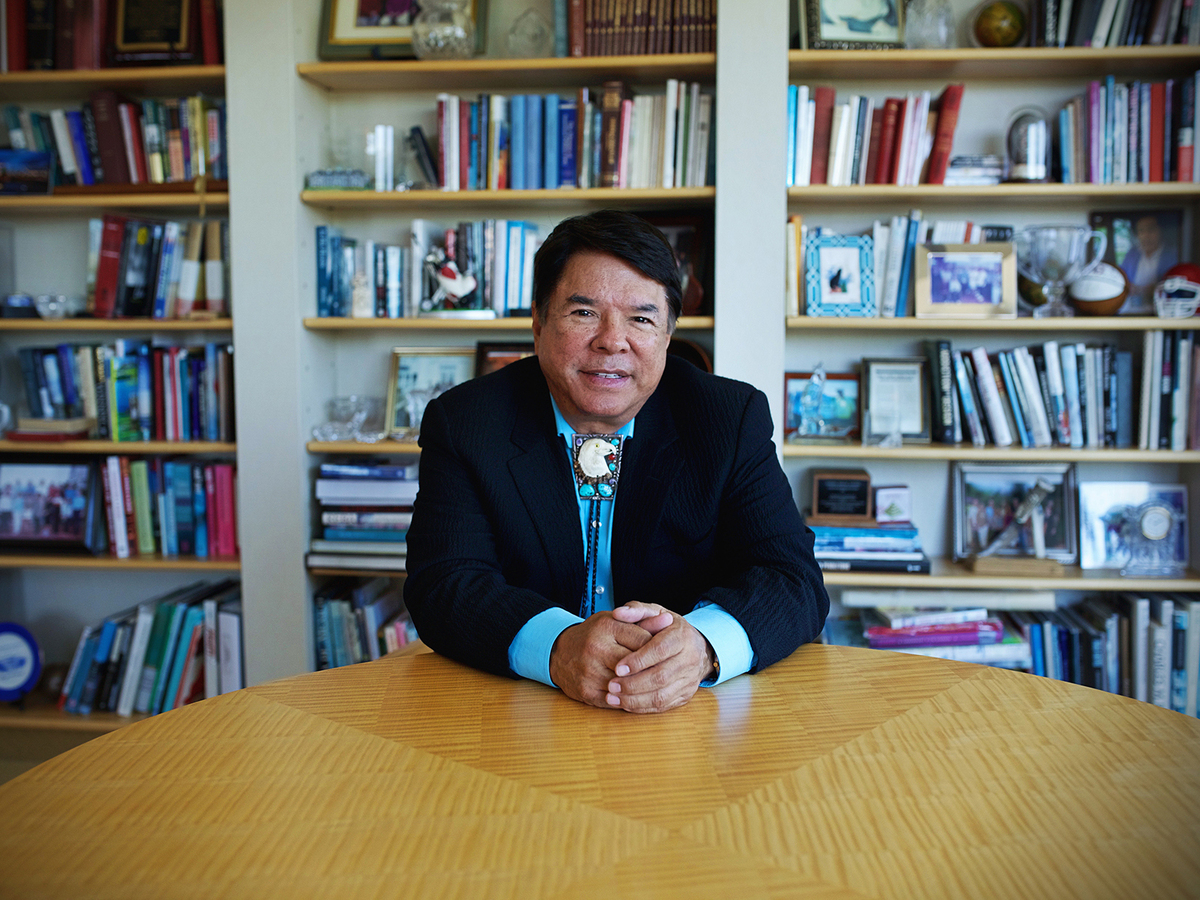 Ray Halbritter in his office.

Courtesy of the Oneida Indian Nation

Halbritter, the CEO of Oneida Nation Enterprises, wasn't seeing stories by or about Native Americans in mainstream media outlets, and on the rare occasion those places did try to write about indigenous people, the stories often got distorted.

So, in 2011, he acquired Indian Country Today — a 30-year old weekly newspaper that centered the voices of indigenous journalists. From there, he helped transform ICT into a multi-platform digital media network, which he says reached more than a million readers each month.

For the next six years, the journalists at ICTMN wrote about some of the most pressing issues rocking Indian Country, from the resistance to the Dakota Access Pipeline to presidential politics to murdered and missing indigenous women. They also celebrated indigenous communities by profiling Native athletes, doctors and actors.

But on Sept. 4, Halbritter announced the network was ceasing active operations. The business model, he says, was too expensive to be sustainable.

But Halbritter believes the need for strong reporting on Native America is as urgent as its ever been.

I spoke with Halbritter about the past, present and future of Indian Country Today Media Network. Below is an edited version of our conversation.

So Indian Country Today Media Network is shutting down, for the time being. What happens next?

There are some methods by which Native People are still getting some media. But we are exploring media opportunities that can meet the journalistic and organizational standards that we had set for ourselves. But the business model was just costly, and it just was not functioning well.

We know that today, the media is always developing, with the internet, with cell phones, with Twitters and Facebooks and Googles. And there's a swirl of information around us all the time, instantaneously and individually, and that affects the kind of business model that we were initially involved in. So we are looking to find a way to — and we're currently in some talks with some various groups and stakeholders — to try to get some insights on how best to repurpose this publication in a way that's viable, both journalistically and economically.

And we need to be sure we can find a way to express Native American thinking and thought. The truth and accuracy about us is fundamental for our future and our relationship in this world.

What is missing in mainstream portrayals of Native Americans?

In media, Native people are often looked at as relics or mascots. And there's so much more complexity, so much more beauty. There's struggle and nuance to the Native American experience in this country.

We've experienced what it is to have people not understand you. Be afraid of you. Question who you are. We are real people with real lives. All of that is sometimes not understood, or even talked about or represented in mainstream media.

There was such a great need [for Indian Country Today] because the perception and image of Native people was very many times inaccurately portrayed, and as a result, the truth about Native people was not always presented.

You wrote in an open letter on ICTMN's website, "We know that when we leave our stories to be told only by other media outlets, those stories too often go untold — or get distorted." Can you talk about that?

I think, generally speaking, the result of having inaccuracy in media distorts the way people see us, and as a result, it affects the way we're treated — whether it's the DAPL pipeline that was being dealt with in Standing Rock, or the way people view and understand us dealing with the NFL team name in Washington that is a racial slur. We understand that in some cases, people really don't understand what the issue is and why it is an issue. Some of our own people.

And there's such a great need for people to understand one another, whether it's large countries or small countries in the world. No matter how big or how small you are, we all live on this planet. We all share our lives on this turtle island, we call it. And as a result, we're all here for a reason. And hopefully those reasons will be dealt with out of understanding and communication, in a way that benefits us all.

And it sounds probably as though that's trite, and we all know that. But nonetheless, a lot of what happens to Native America is not done that way, in a way that allows us to be represented or at least understood.

In referring to Indian Country, you're talking about hundreds and hundreds of groups of people. How do you speak to that many different cultures and groups?

Well, we just wanted to be a vehicle to allow themselves to represent themselves. I wouldn't try to even suggest that I represent Indian Country or that our paper did, other than through the voices of Native peoples themselves. And that's really what we're trying to become. A conduit for their voice, for their representations, their stories, to be heard and told. But certainly it's complex and nuanced. And there's a great need to have that voice heard. That fire to continue to burn. And we will be doing everything we can to help make sure that happens in the future.

There were some giant stories out of Indian Country this year that made national headlines. So what was your favorite story that didn't get a lot of press outside of ICTMN?

There were really so many. But I would say that the groundbreaking coverage, now spanning decades, on murdered and missing indigenous women, was incredibly significant, and still is. It was great to see [the movie] Wind River be created and produced, because it speaks to some of those issues certainly, and at the end talks about the fact that there's no statistics on murdered or missing native women, the way there are for other races. That's just sort of astonishing, some of the information.

We've also done some really great stories that are interesting and fascinating about the intergenerational trauma that occurs — the latest studies on intergenerational trauma. We're tireless on our reporting on the Standing Rock Dakota Access Pipeline. Certainly, the interview with President Barack Obama was a wonderful opportunity. So they're just some of what I would say the more intriguing stories for a small publication like us.

Are there any stories that you've been dying to do with Indian Country Today that you didn't get a chance to?

I think no matter how much we would like certain stories to be done, it really is so important that a Native voice is heard. That the fire of the Native heart is able to be expressed in a way by Native people. And while it may not seem dramatically different than what else is happening, there is a difference. You can trust me, there is a difference.

The critical issue to me, for Native America, I mean, they have highest teenage suicide rate in the world on Indian reservations. And that comes from, to me, a lack of self-esteem. A lack of even having an understanding, or a perception, or an image about themselves to see any hope for the future. What a hopeless statistic that is. And it is a statistic that says something very complex about our society, and about our problems that we have.

And who in the country really is delving into that and addressing that issue?