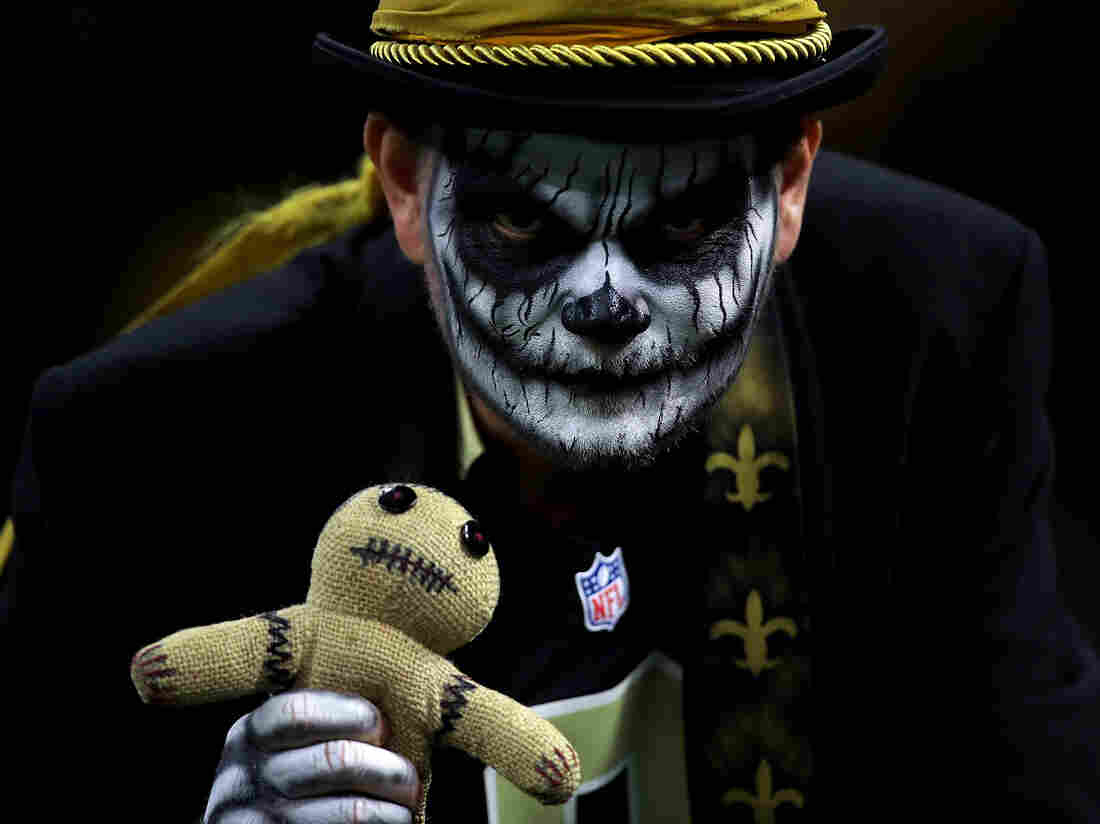 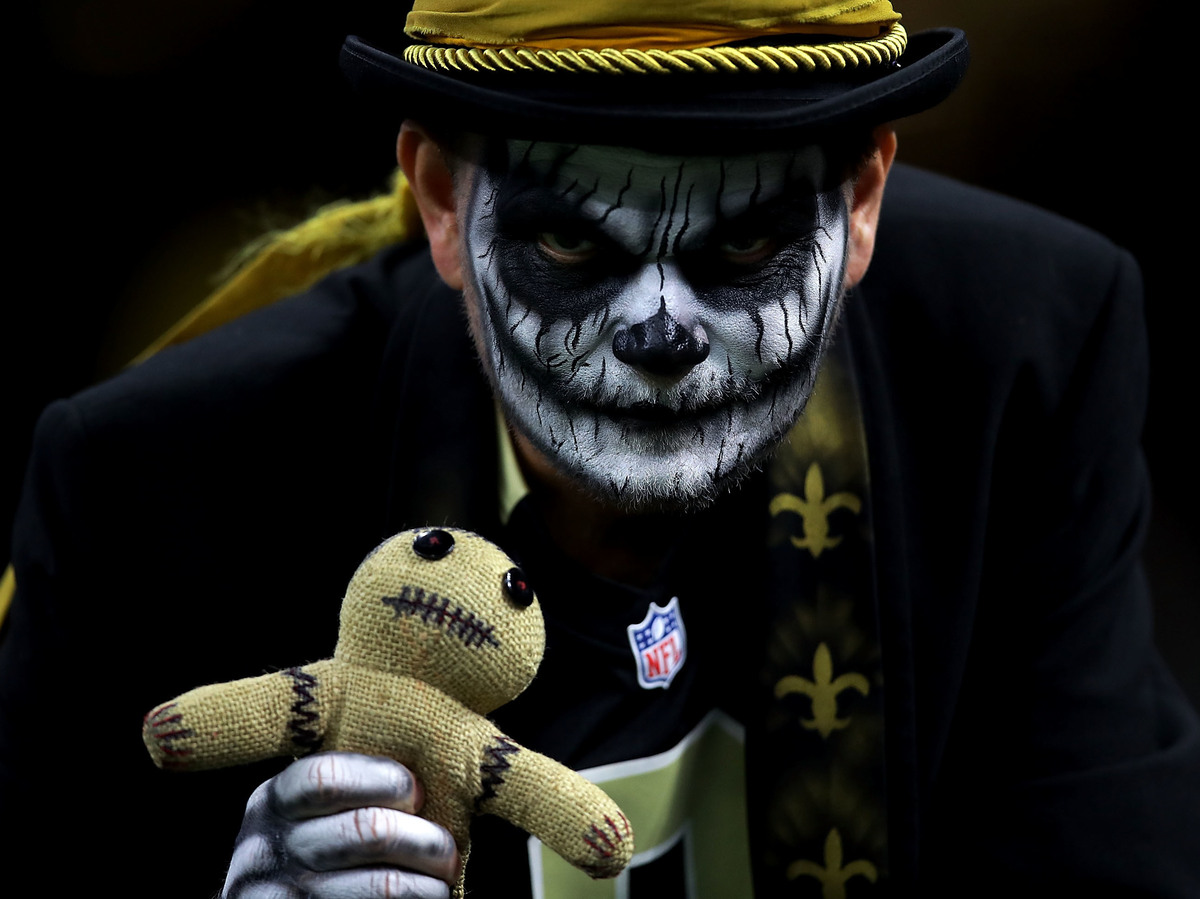 A New Orleans Saints fan holds a voodoo doll at the Mercedes-Benz Superdome in New Orleans in 2016.

Never mind ghosts and goblins, zombies and vampires. For some people, the scariest part of Halloween is the deluge of offensive costumes, from frat boys in black face to white kids in kimonos to sexy celebrity Pocahontases.

At this point, every masquerader (should) know that race is not a costume. But the racial politics behind certain get-ups aren't quite so obvious.

This week on Ask Code Switch, we got a question from Jennifer, a Pennsylvania woman whose daughter is entranced with the occult. The costume in question? Voodoo doll.

My 9-year-old daughter (half German-American, half Jewish-American) saw a voodoo doll costume she wants to wear for Halloween. It's styled modestly, is pretty while still being a little "ghoulish," and isn't commercial or political — all of which make it attractive to me. But I don't know enough about Louisiana culture or African religious traditions to know whether this would hurt or offend someone. My daughter says voodoo was in The Princess and the Frog, so it must be OK. But I know Disney has messed up in the past. Can you help?

I totally get why your daughter wants to be a voodoo doll. It's spookier than a princess, more creative than a ghost, not as played out as a witch. I understand why it's appealing to you, too. (Although I wouldn't go so far as to say it's not political.)

But your instinct that there might be something off? Dead-on.

To understand why, it helps to have a little background about what exactly "voodoo" is. That is actually much more complicated than you might think.

The term "voodoo" is often used as a catchall for several distinct, but related religions that combine elements of Catholicism and West African Vodun. There are different variations of Voodoo (Vodun, Vodou, Hoodoo, Vaudou) practiced in Louisiana, Brazil, the Dominican Republic and Cuba. But the most well-known, at least in American popular imagination, is Haitian Vodou.

Vodou is one of Haiti's official religions. It was created by enslaved Africans and their descendants, who came in contact with Roman Catholic missionaries in the 1500s and 1600s.

The religion's "fundamental principle is that everything is spirit. Humans are spirits who inhabit the visible world, and other spirits ... populate the unseen world." That's according to the Encyclopedia Brittanica, in an entry written by Elizabeth McAlister. She is a professor of religion and the author of a book about Haitian Vodou, called Rara! Vodou, Power, and Performance in Haiti and Its Diaspora.)

But Jennifer, most Americans know nothing about Vodou as an actual religion. What we know about is the pop culture version: what a scholar named Adam McGee refers to as "lower case 'v' voodoo" — that witchy, bloodletting revenge stuff from New Orleans. (Again, that's not to be confused with Louisiana Voodoo, a real religion practiced by many.)

That kind of voodoo, with the dolls and the zombies, is what you see in movies like Indiana Jones or Princess and the Frog. White Zombie, a 1932 horror film, was one of the first movies to establish a set of racial tropes about Haitian Vodou — voodoo dolls among them.

McGee writes that the voodoo we see in the movies was lightly inspired by religion but is primarily the brainchild of Hollywood producers and long ago travel writers. And it has a very specific purpose:

"This imagined religion serves as a venue for the expression of more-or-less undiluted racial anxieties, manifested as lurid fantasies about black peoples. ...

"As something that is coded as black, presenting voodoo in scenarios that are belittling, denigrating and, most especially, aimed to evoke terror is a way of directing these sentiments at blacks without openly entering into racist discourse."

So, back to voodoo dolls. As you might imagine, they have no real connection to Haitian Vodou.

Kyrah Malika Daniels, a professor of of art history, African & African Diaspora Studies, and theology at Boston College, says she sometimes sees the dolls being sold in places like the checkout line at Barnes & Noble. And for her, that serves as "this small reminder that any exposure we have to black religion that is not Christianity is satanic. Is devilish. Is something to be feared."

"This is incredibly damaging to so many devotees of African and African-derived religions who have been able to rely upon these traditions for faith, for community, for healing purposes," Daniels says.

To put all of this in context, Daniels says, think about what it might look like if you subbed out Vodou for Christianity and used it as a Halloween costume:

"If we were to consider how Christians might feel if somebody were to dress up as a gruesome, gory, bloody Jesus, hanging from a cross — what would that look like? Would that not be offensive?"

Daniels adds that what is even more profound about this "is that a gory representation of Jesus, while perhaps quite offensive, would not be inaccurate. It actually is a component of the religion. Whereas the voodoo doll is not."

I think that about says it.

So, what should you tell your daughter? Haitian Vodou and Louisiana Voodoo are fascinating religions, and if she seems interested in learning more about them, there are some great resources available.

But when it comes to Halloween, treat Vodou like you would any other faith. That is to say, don't delve into anyone else's religious traditions (real or dreamed up by Hollywood) in search of a costume.

But hey — if you're still in need of something to wear on Halloween, an unofficial poll of everyone I know suggests that regular old dolls are creepy enough as is. Happy haunting!

So readers, what racially sensitive costume will you don this Allhallows Eve? And what are your best alternative costume ideas for Jennifer? Let us know. We're CodeSwitch@npr.org.

And as always, if you have a racial conundrum of your own, fill out this form and tell us the deets!