Accessibility links
Remembering The Lost Communities Buried Under Center Field : Code Switch In the 1950s, residents of several Latino neighborhoods in Los Angeles were forcibly evicted from their homes, which were then razed to make way for the Major League Baseball team's stadium. 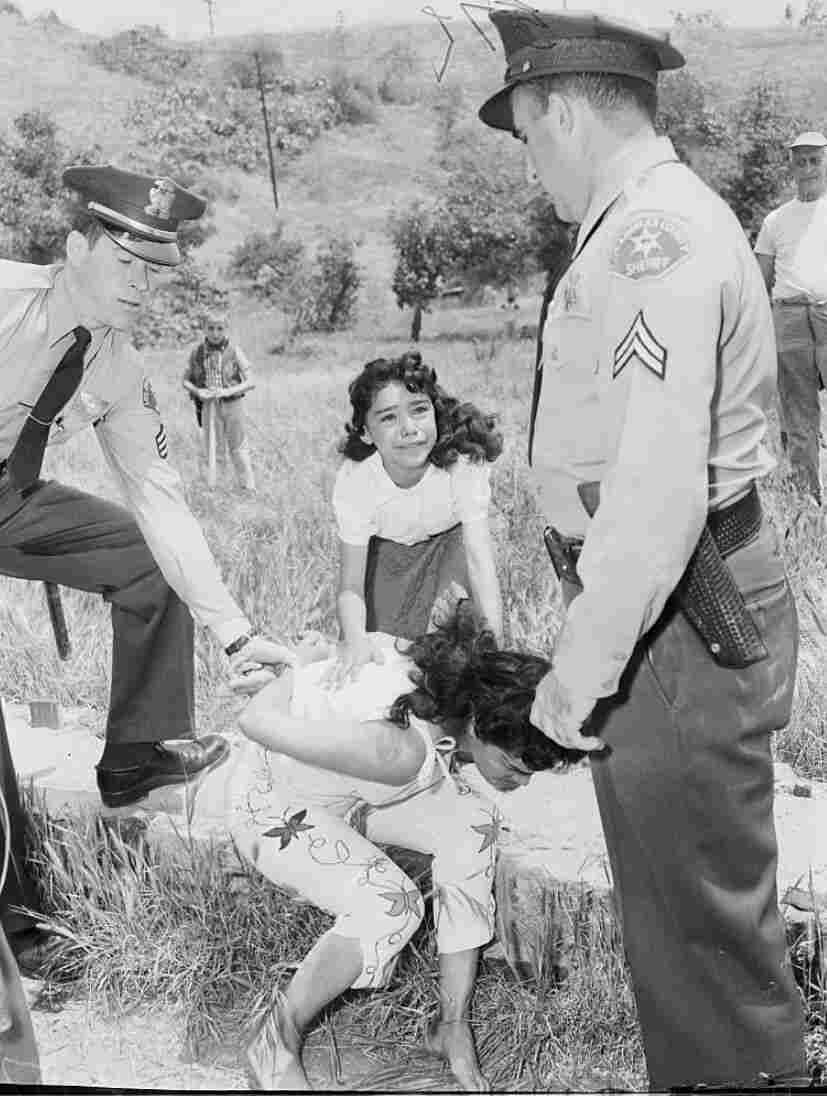 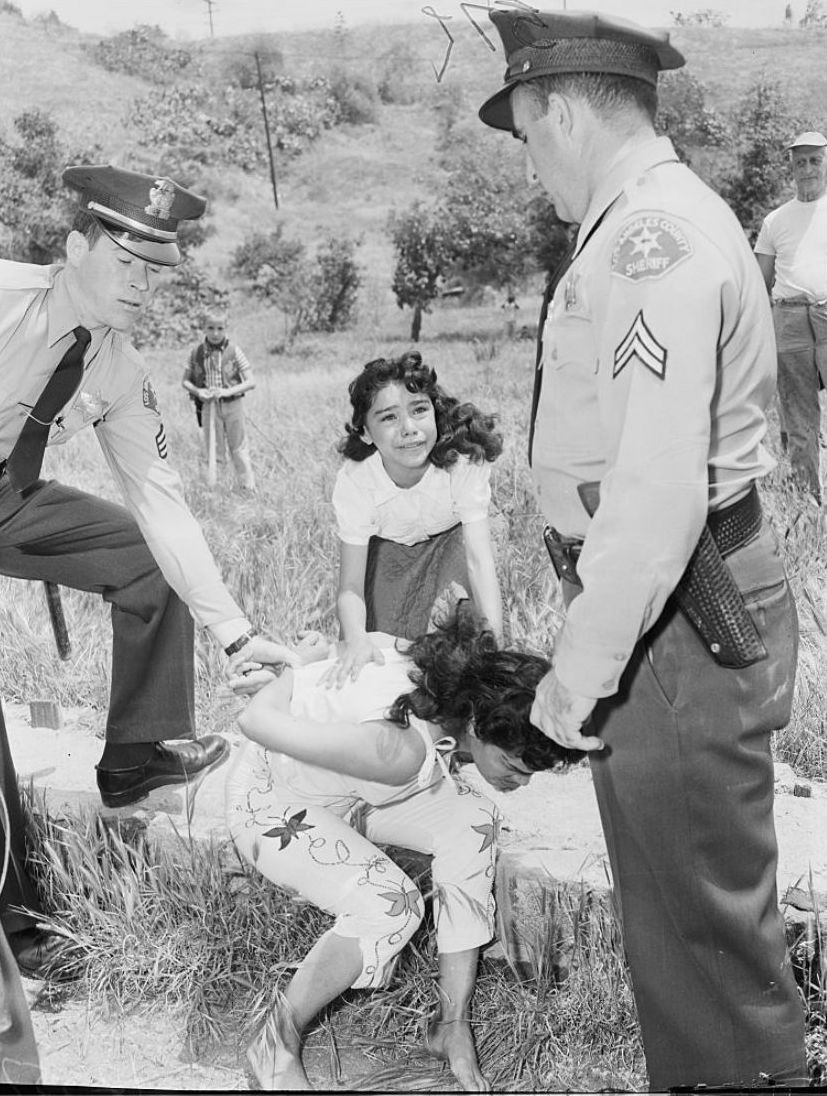 Los Angeles police officers forcibly removed Chavez Ravine residents like Aurora Vargas, who had been resisting the city's orders to leave their homes.

Friday, May 8, 1959. It was a typically clear Los Angeles day, that would come to be known by the residents of Palo Verde — or what was left of them, anyway — as Black Friday.

It was on that day that a group of sheriff's deputies arrived at the home of the Arechiga family, one of the neighborhood's few remaining families. The city had finally come to evict the stragglers. The officers walked up the stairs of the Arechiga home, then kicked the door in and forced their way into the living room. They brought along movers to quickly break apart and bring out the family's furniture, piece by piece.

Children wailed. The elderly were escorted out. One woman was dragged, kicking and screaming by her arms and legs out the door and down the stairs by four deputies.

Avrana Arechiga, the 66-year-old matriarch of the family, threw rocks at the sheriff's deputies as they went about the business of dispossessing her family. "Why don't they play ball in [Mayor Norris] Poulson's backyard—not in ours?'" she shouted in Spanish, according to a newspaper report.

The they Arechiga was shouting about were the Los Angeles Dodgers. And they had plans to build a stadium on Palo Verde, La Loma and Bishop — three low-income neighborhoods that once made up the mostly Mexican-American community of Chavez Ravine. The Arechigas were in the way.

"Ten minutes later, the roar of two giant bulldozers drowned out Mrs. Arechiga's sobs as she sat on a curb and watched the machine reduce the frail dwelling to rubble," a newspaper reported. Television news crews captured the commotion, and the video was all over television that night. The Arechigas were on the front page of the next day's Los Angeles Times with the headline: "Chavez Ravine Family Evicted, Melee Erupts."

For the next week, the Arechigas camped in front of the rubble that was once their home. 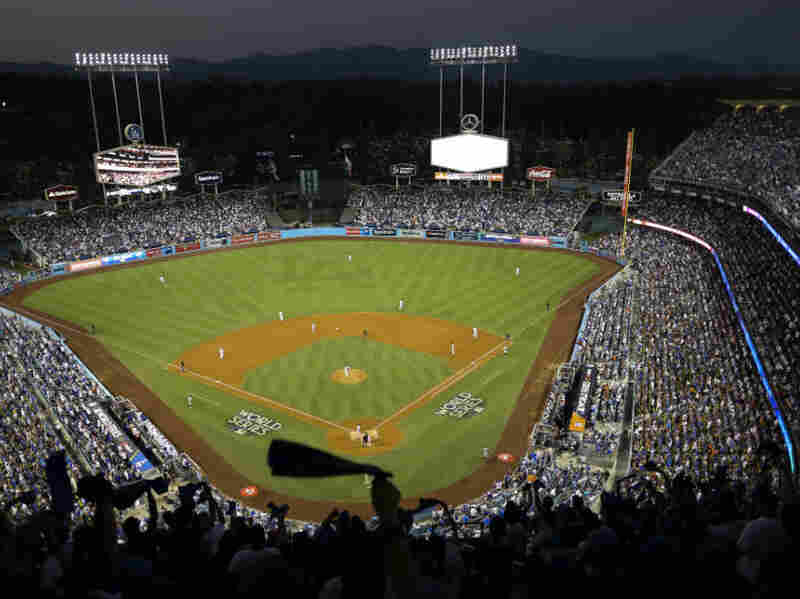 Many aging Angelenos, who lived through the violent confrontations over the land upon which Dodgers Stadium was built, remain embittered toward the team. Tim Donnelly/AP hide caption 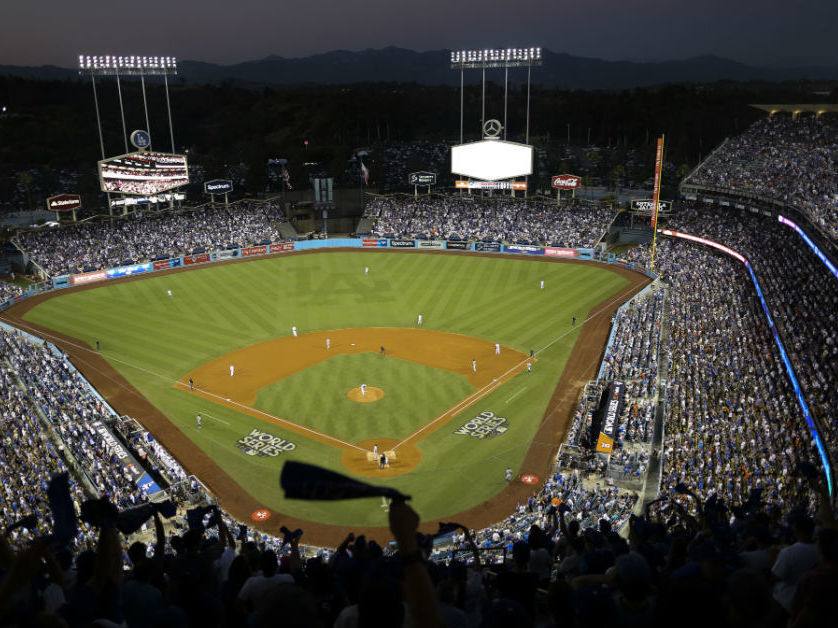 Many aging Angelenos, who lived through the violent confrontations over the land upon which Dodgers Stadium was built, remain embittered toward the team.

This October marks the first time in 29 years that the Los Angeles Dodgers are playing in the World Series. Sold-out crowds of over 50,000 fans have filled up Dodger Stadium in each of the team's first two home games.

Today, half of Los Doyers fans are Latino — the majority of those Latino fans are of Mexican descent — according to a spokesperson for the team. But the relationship between the Dodgers and its Mexican-American fans had dark beginnings.

By the time the Arechigas and the few remaining families were forcibly removed from their homes, Chavez Ravine was a ghost town. Most of the residents in its three neighborhoods had sold their properties in the early 1950s to the city of Los Angeles under the forceful use of eminent domain — the state's power to take private property for public use, after paying the owner of the property a fair price. In many cases, even today, the government tries to lowball property owners, offering only a fraction of the property's value. But many in the neighborhoods resisted.

When the city initially began taking over the Chavez Ravine lands, it told residents of the neighborhoods there that the land would be for public housing, and that housing was promised to many of the Chavez Ravine residents who would be displaced. But those plans changed when when Norris Poulson, a conservative Republican, entered the mayoral race in Los Angeles and ran on an anti-public housing campaign using Red Scare tactics.

"[Poulson said] public housing was a secret communist strategy to create communist cells in the heart of downtown," Avila says.

When Poulson won the mayoralty, those public housing plans withered and died.

For years, the ravine sat in limbo, depopulated but for a few residents. But in 1958, the city reached a deal with Walter O'Malley, the owner of the Brooklyn Dodgers, to bring the team to Los Angeles. Per their plan, Dodger Stadium would be built on the empty land in Chavez Ravine.

There was one thing in their way: the Mexican-American families who were holding out, and had never sold their properties. That included the Arechigas. For years after, many of the families that had been pushed out by the city and the Dodgers would gather for an annual reunion for their forgotten community.

When she was an undergraduate at University of California at Berkeley, Melissa Arechiga remembered sitting in a classroom discussion on the history of Los Angeles and being surprised by seeing her family members in an image of the 1959 evictions. "I'm in a classroom with 300 students and I'm like, 'Whoa'—when they started talking to me about my family," she said. "I was just floored."

When Melissa was growing up, her mother used to tell her stories about evictions, but she thought her mother was making it up. And she didn't realize that images of her relatives' violent removal had been immortalized.

Melissa is Avrana Arechiga's great-granddaughter and also founding member of Buried Under the Blue, an organization that wants to preserve the history of the three Chavez Ravine neighborhoods that are today buried under Dodger Stadium. She shares archival images on social media of those forgotten communities, including the residents' resistance to the city's repossession of their homes.

But the group also wants to remember the history of the Chavez Ravine neighborhoods, which the city deemed slums in the 1930s, but where a tight-knit community of over 1000 families flourished, nonetheless.

There were weddings and quinceañeras and everyone was invited. Neighbors left their doors unlocked. They grew their own produce and even raised their own livestock. According to Arechiga, her mother has happy childhood memories of going up a dirt hill with pieces of cardboard, and sliding down the hill. "They were able to get through good times, bad times together because they had each other, because they had cultural capital and community support—that safety net," she said.

She started Buried Under the Blue with Vicente Montalvo, whose grandparents were forced to sell their property in Palo Verde and left the neighborhood before the evictions became violent. His grandparents, who are in their 90s today, were neighbors with the Arechigas.

Arechiga and Montalva said the group finds pushback from some fans who don't want to talk about that part of the team's past. "We have people who say... 'That was a long time ago!' Like 'get over it!'" said Arechiga.

According to Avila, the UCLA professor, the evictions are part of a larger, complicated story of how both the Dodgers and the city's Latino communities have been defined by each other. "The other part of the story is just how important the Dodgers have been to the development of a homegrown Chicano/Latino identity in Los Angeles," he said. He said his father and his grandfather were both huge Dodgers fans.

The explosion of the team's Latino fandom is usually attributed to one moment: the signing of Fernando Valenzuela in 1979. Valenzuela, was a humble 20-year-old pitcher from Sonora, Mexico, who few people had heard of, but he quickly developed into the team's unhittable ace. He became the first rookie to win the Rookie of the Year Award and the Cy Young, which goes to the league's best pitcher. He led the Dodgers to a World Series win in 1981 and fans of Mexican descent flocked to Dodgers Stadium to catch a glimpse of Valenzuela, a superstar in whom they could finally see themselves.

But like many Angelenos, Valenzuela seemed to know little about how the field on which he pitched came to be. In the 2010 ESPN 30 for 30 film, "Fernando Nation," Valenzuela was asked about if he ever knew about the history of Dodger Stadium and the Mexican-American community that once lived there. "No, never," he said. "They never spoke about what happened."

On Wednesday, in a pre-game ceremony before Game 2 of the World Series, the now-56-year-old Valenzuela stepped up to the mound and threw the ceremonial first pitch. The crowd roared like it was 1981. And it continued as Vin Scully, the team's beloved longtime announcer, had the hometown crowd repeat after him, "It's time for Dodger Baseball!"

One wonders how watching this celebration felt to the aging residents of the former Chavez Ravine, whose homes, schools and churches are buried under the stadium and its parking lot, and who vowed to never root for the Dodgers or attend any of their games.