Accessibility links
Even When Black Unemployment Is At Record Lows, It's Dangerously High : Code Switch Even in the best economic times, black unemployment is nearly twice that of whites, and those racial disparities have calcified into a permanent, structural feature of the American economy. 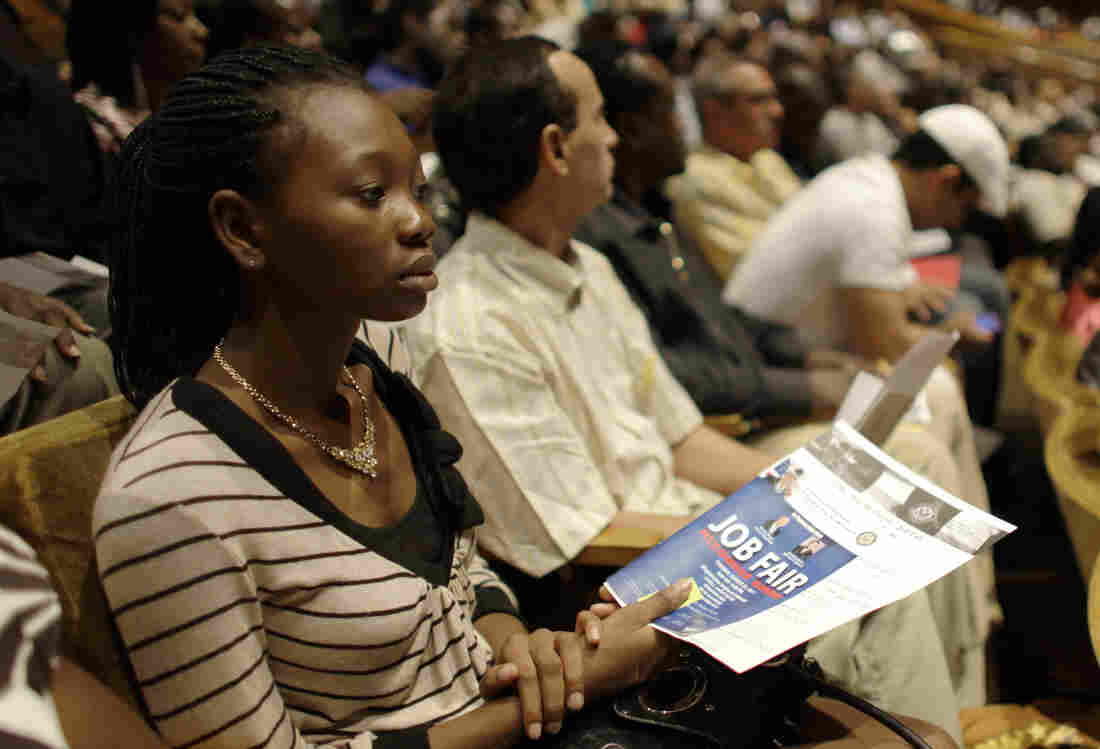 People in Miami, Fla., attend a 2011 job fair sponsored by the NAACP meant to lower the high rate of unemployment in the black community. Lynne Sladky/ASSOCIATED PRESS hide caption 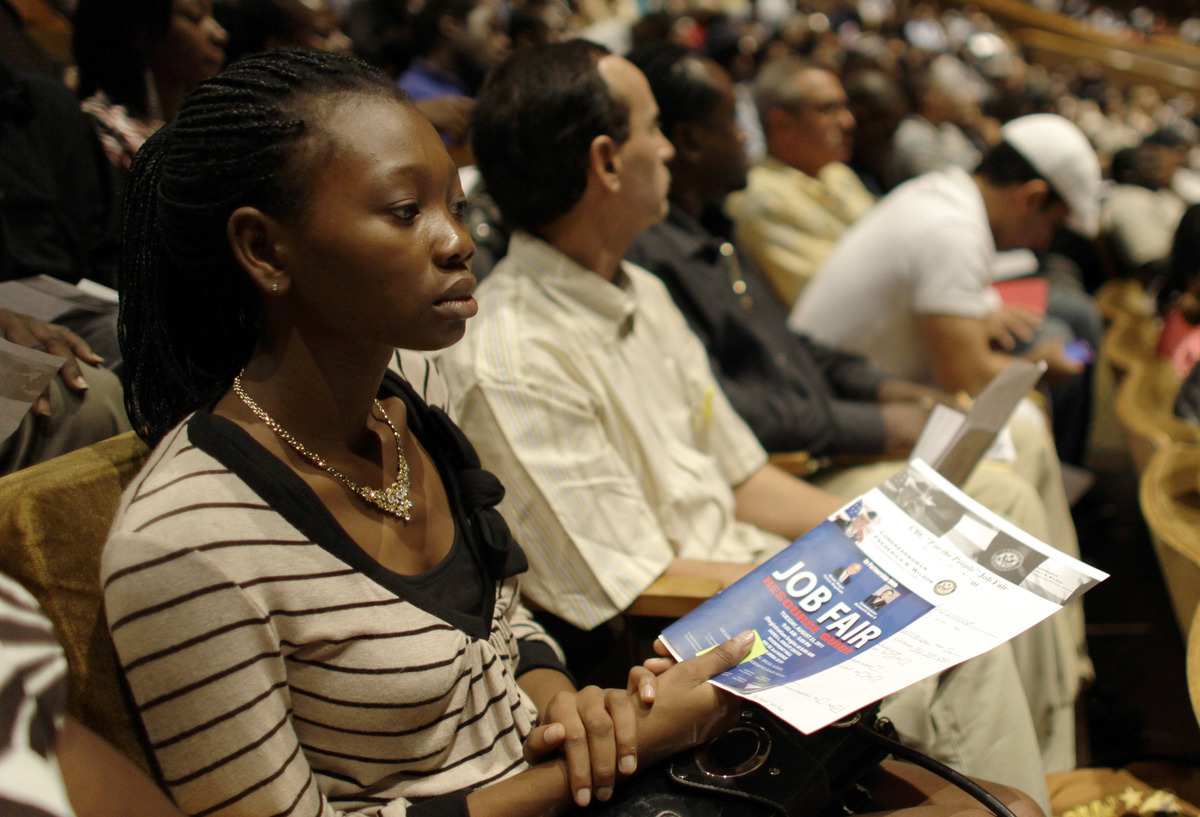 People in Miami, Fla., attend a 2011 job fair sponsored by the NAACP meant to lower the high rate of unemployment in the black community.

On Tuesday, President Trump painted a rosy picture of the economy during his first State of the Union speech: rising wages, a boom in manufacturing jobs, jobless claims were at their lowest in nearly half a century.

But one of the biggest applause breaks during his survey of the landscape greeted this claim: "Something I'm very proud of — African-American unemployment stands at the lowest rate ever recorded." Cue hoots and hollers and a standing ovation from the members of Congress on the chamber floor.

It was an oddly showy response from the folks in attendance, given how little serious attention is usually paid to black unemployment by members of Congress. Really, who knew they cared so much?

The qualifiers for the president's claims around black joblessness are pretty significant; indeed, they're actually the whole story. Most of the improvement in the jobs figures are part of an ongoing trend that can be attributed to the Fed's management of the economy under Janet Yellen, whom President Trump declined to renominate to run the nation's central bank. And while the black employment numbers were historically low, at the time of Trump's speech, the most recent jobs data put black unemployment at 6.8 percent. If those numbers were the overall national figures, the country would be in or near a recession. Consider that for as far back as the data goes, black unemployment has consistently been around twice the rate of joblessness for white people, in strong economies or sluggish ones. If the broader economy is on solid footing, black unemployment numbers is high. When the nation is a downturn, black employment figures teeter on the catastrophic.

Even the relatively low black unemployment numbers that Trump touted in his State of the Union speech couldn't hold; by the end of the week, new jobs figures showed that black unemployment actually spiked nearly a full point to 7.7 percent. And if black unemployment is never that low, white unemployment is almost never that high, with a notable recent exception of a sustained fallow period between 2009 and 2011 during the Great Recession. (In January, white unemployment fell to 3.3 percent.) Taken together, the January numbers are another example of the precarity of the black economic condition and the extent to which racial disparities in joblessness have calcified into a permanent, structural feature of American life.

"[Politicians] using improvement in the numbers to ignore the disparities, but there's almost no celebration to be had," said Andre Perry, a fellow in the Metropolitan Privacy program at the Brookings Institute. He said that black people were "the sacrificial lambs for full employment," as a desire for aggressive interventions to lower joblessness tends to dry up when the economy is doing better, even as black people are still struggling. And it means that the kinds of policy decisions that get made when the economy is robust — say, raising interest rates — might be good for banks but make it even harder for black borrowers with less family wealth and lower incomes to get loans for homes and businesses. "[Lawmakers] have not demonstrated the stomach to really invest in ways to create inclusive economies," Perry said. "It's still federal investment, but in a gated community kind of way."

And yes, a major part of understanding the employment gap means understanding discrimination, which as we've written before, is a knowable, quantifiable component of the labor market. Even when you control for education, black folks are less likely to be employed and have lower starting salaries than similarly situated white people. When the economy is more robust, that racial gap in employment does shrink, because there's more competition among employers for workers; which is to say that it becomes more costly for employers to discriminate than when jobs are more scarce. But that gap in employment remains, and the gains we do see in black employment tend to be clustered in lower-paying sectors like retail or the gig economy.

There are rural, white communities where unemployment numbers looks like black unemployment numbers, but their employment prospects, too, tend to also be obscured by federal jobs numbers. Conversely, there are communities across the country where black employment and wages actually outpace national averages — they tend to be places that have large, black middle classes due to their proximity to federal jobs, universities, military bases, and the steady private investment that flows around those institutions. Perry said those regions could serve as a template for how to reduce the racial jobs gap — lawmakers in Washington could direct funding and investment to bolster those anchor institutions, while investing in the kind of infrastructure jobs that create jobs and transferable job skills for communities where people are consistently out of work for long stretches of time.

Which brings us back to President Trump. He's never never really explained which specific policies he's championed or enacted that would have lowered the low (but still really high) black unemployment rate for which he's claimed credit. And of course, that's not really the point of him invoking any of this: his boast and Republicans' rapturous applause to it was a way to ding the Democrats (and Trump's black predecessor) for their supposed inaction toward alleviating the plight of black people. All of which is far easier than actually doing something about it.