Accessibility links
'You've Hijacked My Heart': Valentines That Fight Islamophobia With Humor : Code Switch Activist-artist Tanzila Ahmed's snarky cards challenge stereotypes about Muslim-Americans. "With humor, you're able to sneak into people's consciousness and get them to think differently," she says. 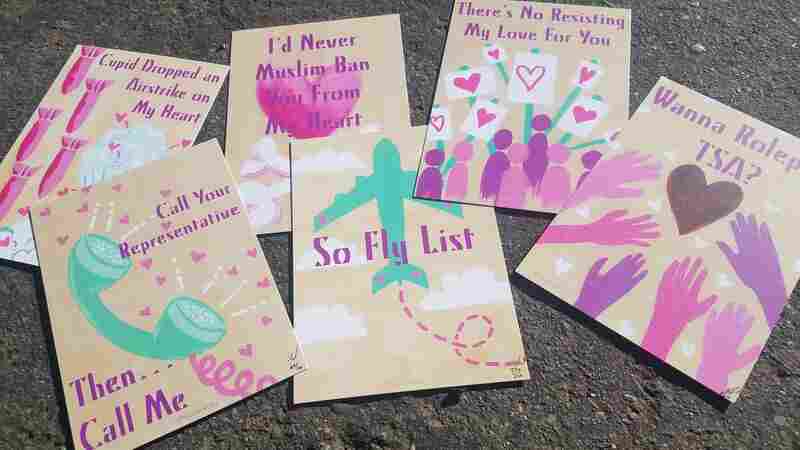 To celebrate Valentine's Day, you can buy a sappy card. Or a silly one.

Or, you can buy one that takes on Islamophobia with messages like "This burka is built for two" and "First Muslim Registry ... Then Wedding Registry."

These are some of the valentine creations of Tanzila Ahmed, a Los-Angeles-based writer, artist, activist and co-host of the podcast #GoodMuslimBadMuslim.

The messages make people laugh — and squirm. And that was absolutely her intention, Ahmed says.

"It is humorous and it is loving, but I think that one of the things that happens ... when it comes to talking about Islamophobia and the politics around being Muslim, people get numb to it," she says. "With humor, you're able to sneak into people's consciousness and get them to think differently."

The project began as a joke in 2011. At first, she made the cards for a few friends. Eventually, as demand grew, she sold them on Etsy. After a few years, she thought the project had played itself out and she stopped making the cards.

Then came the 2016 elections cycle.

"There was just so much material to work with," Ahmed says. "The Islamophobia that we're experiencing in America has escalated to this level that I just did not ever think that we'd ever be at, and I think, given the time, we need humor and love to push back on it."

On whether the cards make Muslims feel uncomfortable, too

My cards definitely do make Muslims feel uncomfortable. There's this perception that when Muslims present themselves in mainstream culture that we're supposed to present this "good Muslim" narrative, of being perfect and being a good immigrant, and not causing waves ... not being snarky, not pushing back on the status quo, and I think these cards definitely do that.

On her favorite valentine from this year

I think my favorite from this year is the "So Fly List." ... You have this no-fly list that so many of us are used to being on, and so I like the idea of taking that back and calling it the "So Fly List"

On having fun while doing serious work challenging stereotypes

There's absolutely a serious message. I've been a political activist for about 18 years now, and it's so hard to get people to pay attention to your message, and you have to be creative and you have to figure out how to use humor. I was also just tired of being serious all the time. I'm a Muslim-American woman, and I can have fun and talk about love and be a little bad. I don't always have to be that "good Muslim" narrative that people think that I need to be.

On the idea of combining activism with Valentine's Day cards

My whole life is a running gag. It started out as a joke on Twitter [in 2011]. I was doing publicity for an anthology I was in called Love, InshAllah: The Secret Love Lives of American Muslim Women. And all these interviewers were asking me, "Do Muslim-American women actually experience love?" And I was like, this is just dumb, this is ridiculous. ... These questions are very Orientalizing and fetishizing. ... So I just started letting off steam on Twitter, with the hashtag #MuslimVDay. And then I had some friends who were like, uh, make me these cards. I was like, this was just a joke. I didn't really want to. The first year I made it for my friends only. And the second year, I made a little bit more.

On whether a mostly Muslim audience is attracted to the cards

I think so. I think that's who the audience is for a lot of my work. But I do have a lot of folks that are white who will buy them for their Muslim significant other, which is kind of cute.

Linah Mohammad, Justine Kenin and Renita Jablonski produced and edited this story for broadcast. Maureen Pao adapted it for the Web.