Accessibility links
White Skin, Black Emojis? : Code Switch This week on Ask Code Switch: Is it OK for a white teenager to use emojis that don't match her skin color? ¯\_(ツ)_/¯ 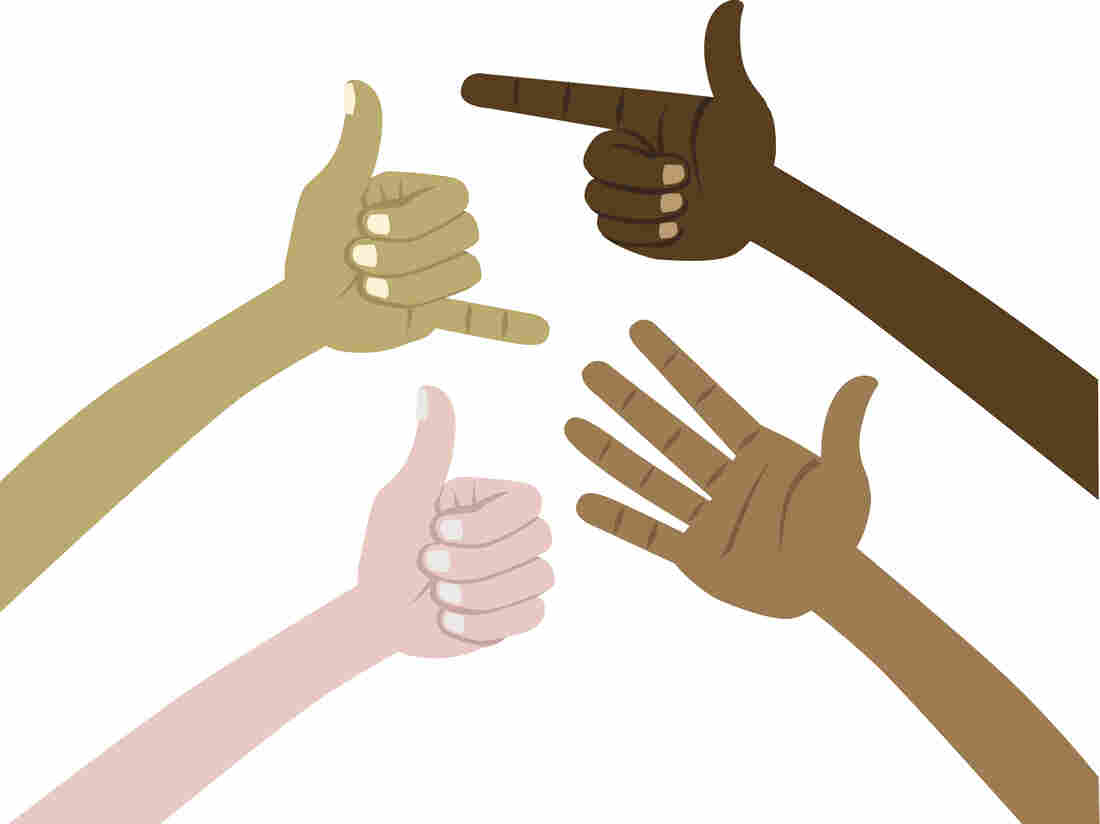 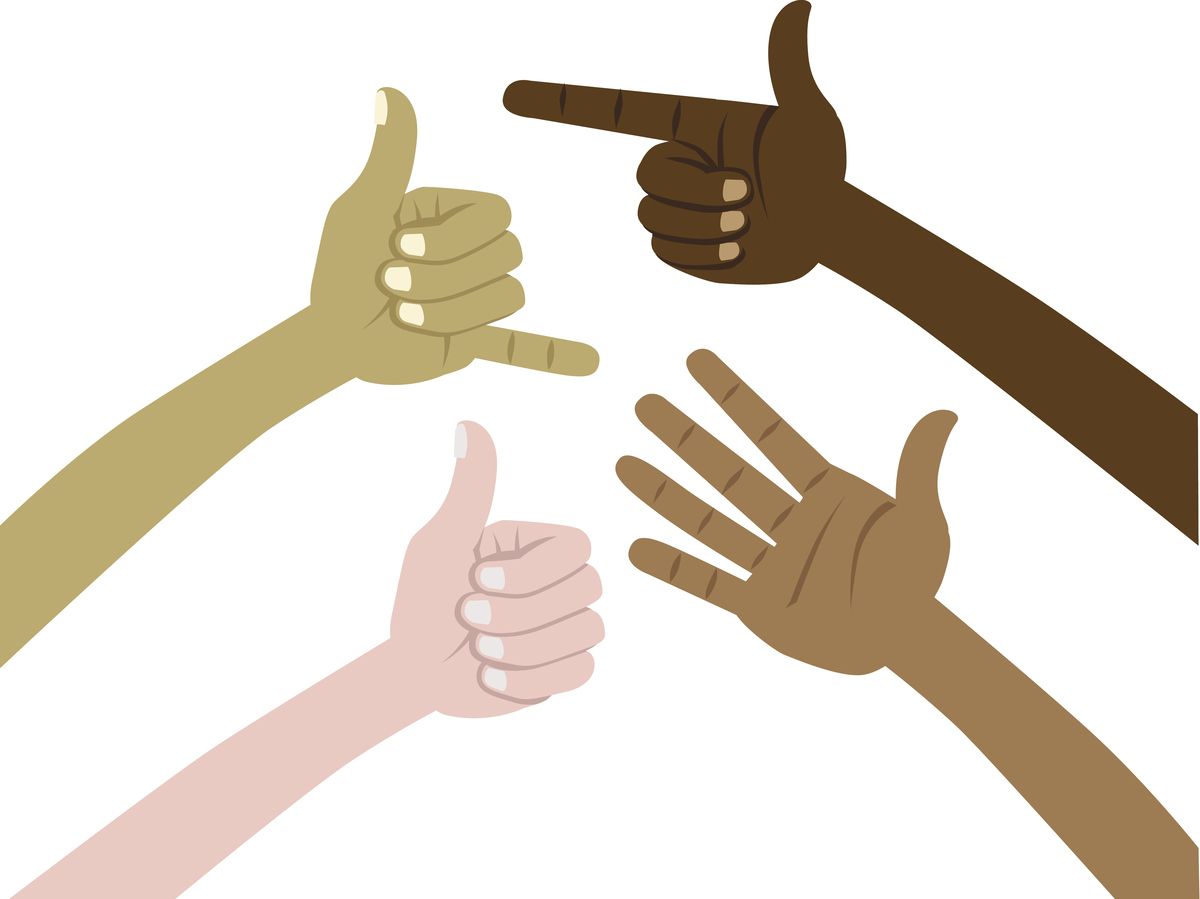 Trying to pick the right emoji to convey exactly what you're feeling — excitement, fear, existential dread — can be tough. What makes it more complicated? All those different skin tones.

On Ask Code Switch, we take on your trickiest questions about race and identity. This week, we're tackling a letter from Kristyn Gelfand, 38, in Toronto. She writes:

My daughter, a very conscious 15-year-old queer, white girl, has recently started using black hand emojis. We discuss race and politics all the time at home. She even listens to your podcast with me sometimes. We live in a diverse neighborhood of a diverse city. As a family and on her own, our daily lives include many friendships and interactions with POC. So my question is, do I speak to her about using the emojis??

If your daughter is like me, she believes an emoji is worth a thousand words. When a friend invites me over for dinner, I like to respond with a (thumbs-up). How else do you efficiently convey: "Yes! What a great idea! I'm excited! (But not too excited)"?

The problem is, the emoji you choose might be sending the wrong message. A text that reads as playful to one person might come off as insensitive to another. (We'll get into some of the reasons in a sec.)

There are a lot of reasons your daughter might be using black hand emojis. It sounds like she cares about the well-being of the people of color around her, and she is probably not trying to cause offense. So maybe she feels that black hand emojis better convey what she is trying to communicate. Or maybe she thinks using them is a good way to show solidarity with her friends of color.

But there is a problem here. When we step into the digital world, it's easy to feel like we can leave our IRL identities behind. But the power dynamics that exist in real life don't disappear just because we're hidden behind a screen.

So yes, you should absolutely speak to your daughter about the implications of using emojis that don't match her racial identity. And the first step is to ask some questions.

Questions like: Is her use of the emojis intentional, or something she just happened to do one day? Or, says Samantha Kemp-Jackson: "What are you trying to say that you can't say in the color of your own skin?"

Kemp-Jackson, a parenting expert and writer, says kids are more open to learning when they have a voice in the discussion. She says asking your daughter about her texting habits will allow her to think more deeply about what she is doing.

If your daughter believes that black skin is an inherent part of her message, she adds, then she needs to think harder about what it is about black skin that enhances her message. Does she think her raised-fist emoji looks more revolutionary when she paints it black? Her clapping hands more rhythmic? Her praise hands more dramatic? Her painted nails sexier?

If that turns out to be the case, then you should explain to her that she is playing up harmful stereotypes about black people, even if that is not her intent.

You and your daughter already talk about race a lot, so treat this as part of that ongoing discussion. You can explain to her that, as a white person, she has a lot of privilege, both on her phone and face to face.

By trying on black skin when it is fun, safe and convenient, your daughter is inadvertently trivializing the experiences of real black people.

"A white teenager can walk into a store, and they don't feel at that point that they want to be black," says Kemp-Jackson. Unlike your daughter, black people can't choose when to invoke their blackness.

If she's not convinced yet? It might help to crack open the annals of emoji history.

Before we could wave, clap and flip someone off in six different skin tones, emojis were just yellow. Simpsons yellow. This default, universal cartoon "skin" was based off of Caucasian skin tones. (And FYI, even on The Simpsons, black and brown characters were drawn black and brown.)

For a lot of people of color, those yellow emojis weren't ... us. Our praise hands always felt a little jaundiced.

It wasn't until 2015 that we got another five skin tones to choose from. Now, I can virtually high-five my friends with a brown hand that looks more like mine.

But white people never wound up taking to the lighter-skinned emojis. Andrew McGill at The Atlantic found that white emoji users err on the side of the yellow "default," rather than the colors that more closely match their skin.

Why might that be? Before, when white people sent a high-five over text, it didn't have to be about race. For people of color, it was. Whenever we sent that yellow high-five, we were reminded that brown and black hands were not an option.

McGill writes that now that there are options, when white people send a high-five with white skin, it feels like sending a white high-five. For people who are used to thinking of their skin as the default, acknowledging whiteness in their digital hand gestures can feel deeply uncomfortable.

After all, what does it mean to send a white high-five? Or a white hang-loose sign? Or even a white raised fist?

Using certain white emojis might feel a little weird to your daughter. She probably doesn't want to assert her whiteness in every text conversation.

But her discomfort is a product of her privilege, and that isn't a good enough reason to try on someone else's skin. So if she finds herself reaching for those black hands ... she should think twice.

If she needs them to help her with her message, she is probably not the right person to be saying it in the first place.

Do you have thoughts on race-conscious emojis? We want to hear from you! Email us at CodeSwitch@npr.org. Have a racial conundrum of your own? Fill out this form and tell us the deets.