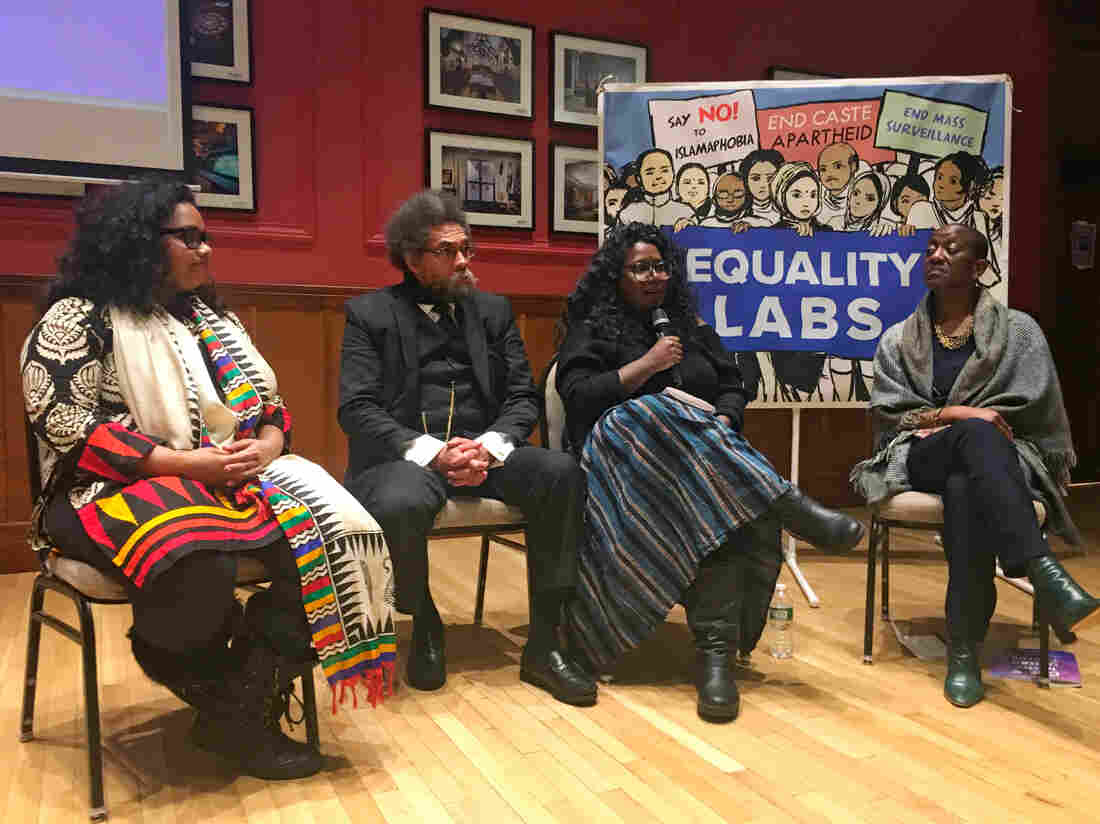 Thenmozhi Soundararajan, Dr. Cornel West, Dr. Maari Zwick-Maitreyi and Karlene Griffiths Sekou of Black Lives Matter Boston, sit for a Q&A to talk about the results of a new survey on caste discrimination in the US. Sonia Paul for NPR hide caption 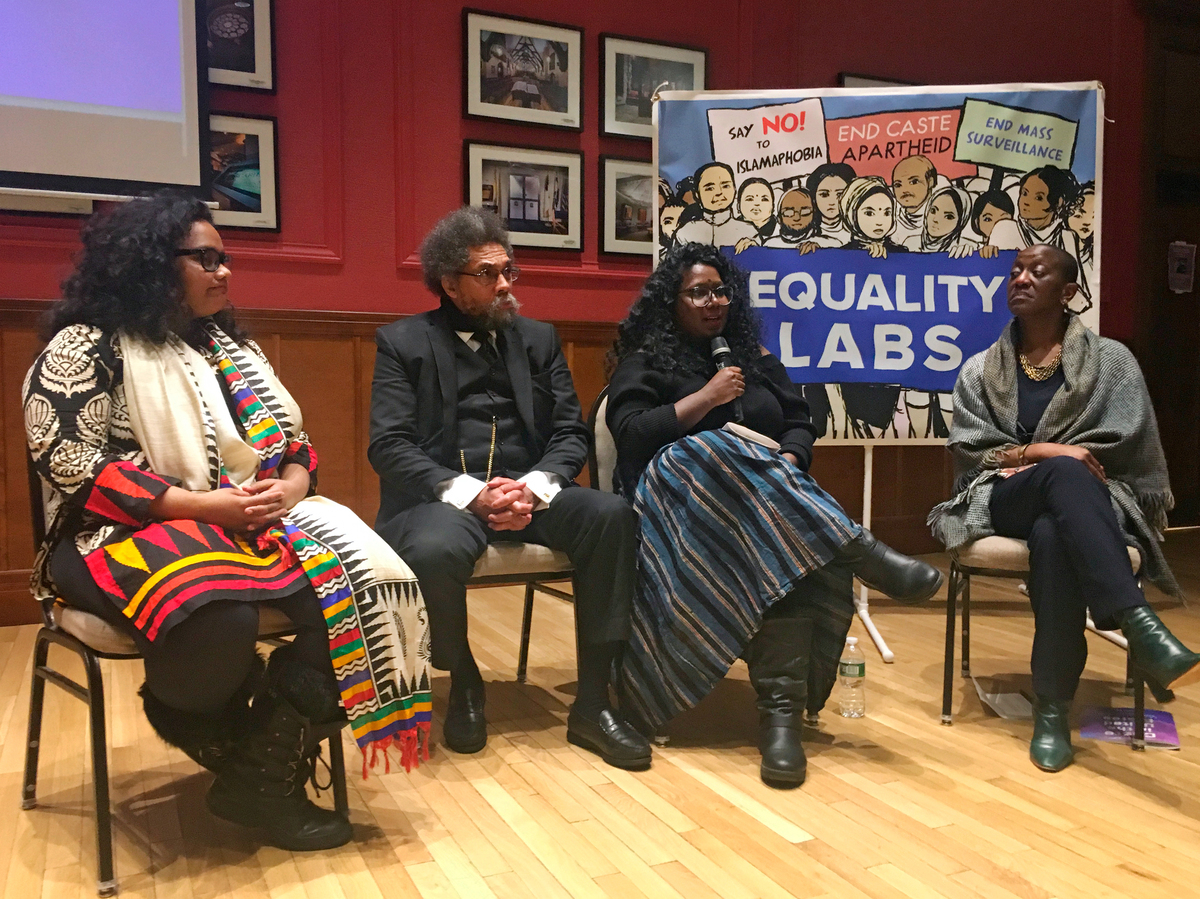 Thenmozhi Soundararajan, Dr. Cornel West, Dr. Maari Zwick-Maitreyi and Karlene Griffiths Sekou of Black Lives Matter Boston, sit for a Q&A to talk about the results of a new survey on caste discrimination in the US.

At over three thousand years old, caste hierarchy is one of the oldest forms of social stratification in the world: the community you're born into in places like India, Pakistan and Nepal has designated where you can work, who you can marry, and what your reputation is in life. Even today in South Asia, caste conflict and discrimination remain a potent force in everyday life. In the United States, though, caste tends to be a relatively muted topic.

The survey, which is the first of its kind, was commissioned by Equality Labs, a South Asian American human rights startup, and includes the experiences of about 1200 people who volunteered their answers.

The report on the survey's results said that two-thirds of members of the lowest caste, called Dalits, said they have faced workplace discrimination due to their caste. Forty-one percent have experienced discrimination in education because of it. And a quarter of Dalits say they've faced physical assault — all in the United States.

Thenmozhi Soundararajan is the executive director of Equality Labs and co-authored the report. She said increased immigration from South Asia — including more and more people from lower castes — fuel this discrimination.

The South Asian American population was the fastest-growing major ethnic group in the US between 2000 and 2010. Today, India alone routinely attracts the majority of skilled worker visas the US allots to foreign nationals, accounts for the highest number of undocumented Asians, and is one of the top countries where new immigrants hail from.

This survey provides data for what many in the community already know: any time there's a dominant population of South Asians — whether they're living in Silicon Valley or New Jersey, or working at an office or a restaurant — caste biases emerge. It could be anything from refusing to date or marry someone from a lower caste, to being on the receiving end of a casteist slur, to being made to sit separately because of your perceived "untouchability."

"We have people who responded who were in the assembly lines for a Campbell soup factory in Central Valley, as well as people who work for Google, Facebook and the other big tech companies," Soundararajan said, naming workplaces that employ large numbers of South Asians.

But because most Americans don't understand caste dynamics, it's hard for people to speak up about it, or bring discrimination cases to court. That includes many people living of South Asian ancestry as well.

Anupama Rao is a historian and anthropologist at Barnard College who studies caste. She said for years, many of the so-called "model minority" of South Asians, who have earned the status of being "good immigrants" in the U.S., came from upper-caste families.

"Many of them, once they are upwardly mobile in the United States, tend to be extremely cagey sometimes, but most often I think embarrassed, to think of themselves as the beneficiaries of caste privilege," she said.

And when being from a privileged caste obscures what this discrimination looks like — because it isn't a part of you or your family's experience — caste itself can become invisible. This is especially true in a new country like the U.S., where immigrant groups of all kinds must navigate their place in an American racial and class hierarchy.

What makes caste discrimination even harder to combat in this new context is that some lower caste people hide their identity as well — 52 percent of Dalits surveyed worry about being "outted" as lower caste.

And the issue is polarizing.

Suhag Shukla is the executive director of the advocacy group the Hindu American Foundation. She said it's important to get rid of caste prejudice, but that this new survey unfairly essentializes and villainizes Hinduism. It's one of the most complex arguments surrounding caste; as the survey notes, caste first appeared in Hindu scriptures. It now pervades all religions of South Asia.

"The single most problematic issue with this survey is that it traffics in the most dangerous and false tropes about Hinduism," she said.

"So instead of demanding an honest conversation about caste and privilege, or its contested relevance among South Asian kids of the third and fourth generation who are now coming of age that are all brown regardless of caste, this report kind of alienates Hindus by scapegoating them," Shukla said. Caste discrimination isn't on the radar for many South Asian kids of later generations, she added. What they're worried about is the discrimination they face for being brown in America. Hate crimes against Muslims and South Asians are at their highest levels since the year after 9/11.

Yet others — both Hindu and non-Hindu — see this defense as helping to preserve the caste system itself. It may not be exactly the same as it functions in South Asia, but a denial of accountability, they say, maintains a hierarchy of privilege.

Last month, over a hundred people packed into the auditorium of the First Church in Cambridge, Massachusetts, to talk about what the survey found. It was a special kind of Black Lives Matter event: an evening with Dalits.

Dr. Cornel West was part of the panel introducing the topic to the crowd, which included both South Asians and non-South Asians. He emphasized the parallels between the struggles of Black Americans and those of South Asians on the lowest rungs of the caste system.

There has been a long history of Dalit and Black leaders finding common ground in their struggles. The Black Panthers in Oakland, for example, inspired the formation of another resistance group, the Dalit Panthers, in Mumbai. And Dr. B.R. Ambedkar, often recognized as the most renowned Dalit leader of the 20th century, and an architect of India's constitution, exchanged letters with W.E.B. Du Bois in the 1940s, after seeing the similarities between the plight of India's Dalits and African Americans in the US. This history was front and center at the event that evening in Cambridge.

"Let us never forget Ambedkar!" West insisted, as applause rung through the room. "And the spirit of W.E.B. Du Bois is here as well!"

Thenmozhi Soundararajan pointed out the shared experiences of those in the room.

"Places like this, where oppressed people are starting to build their connections, this is freedom," she said.