Accessibility links
Exploding Myths About 'Black Power, Jewish Politics' : Code Switch In a new book, historian Marc Dollinger argues that the conventional wisdom of Jewish and African-American harmony during the civil rights era is flawed. And that the real story has lessons for today. 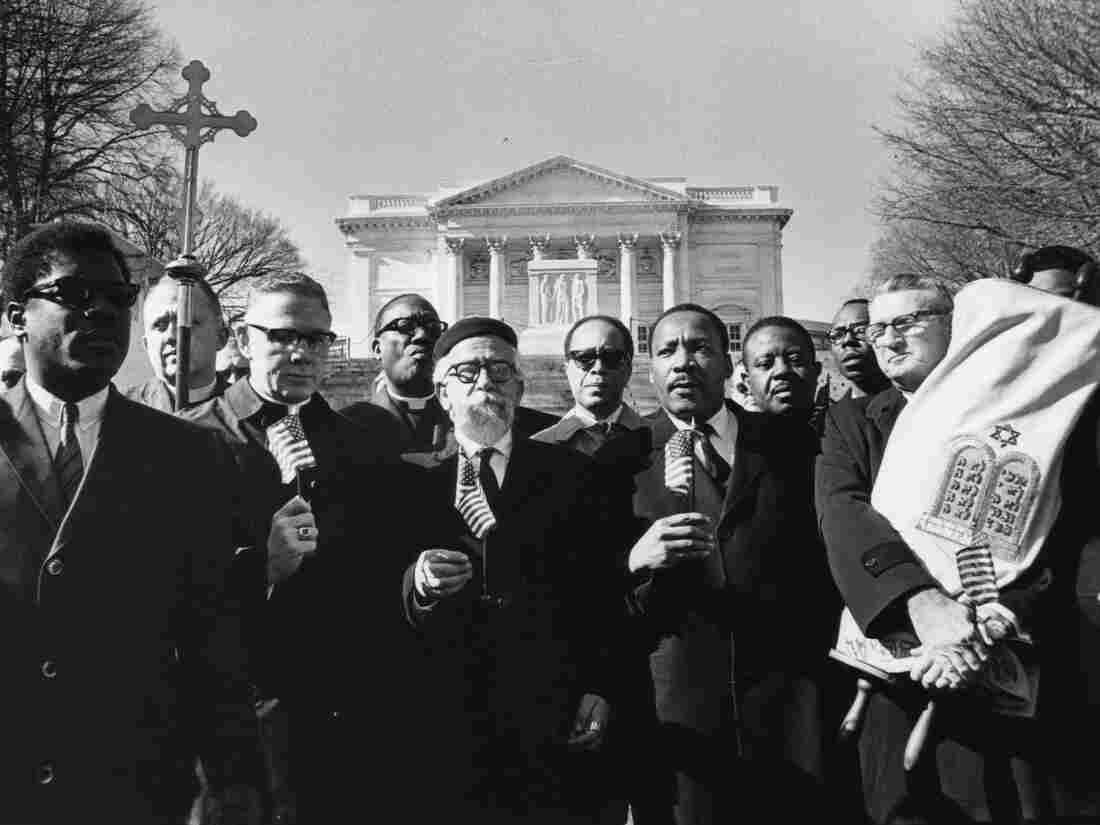 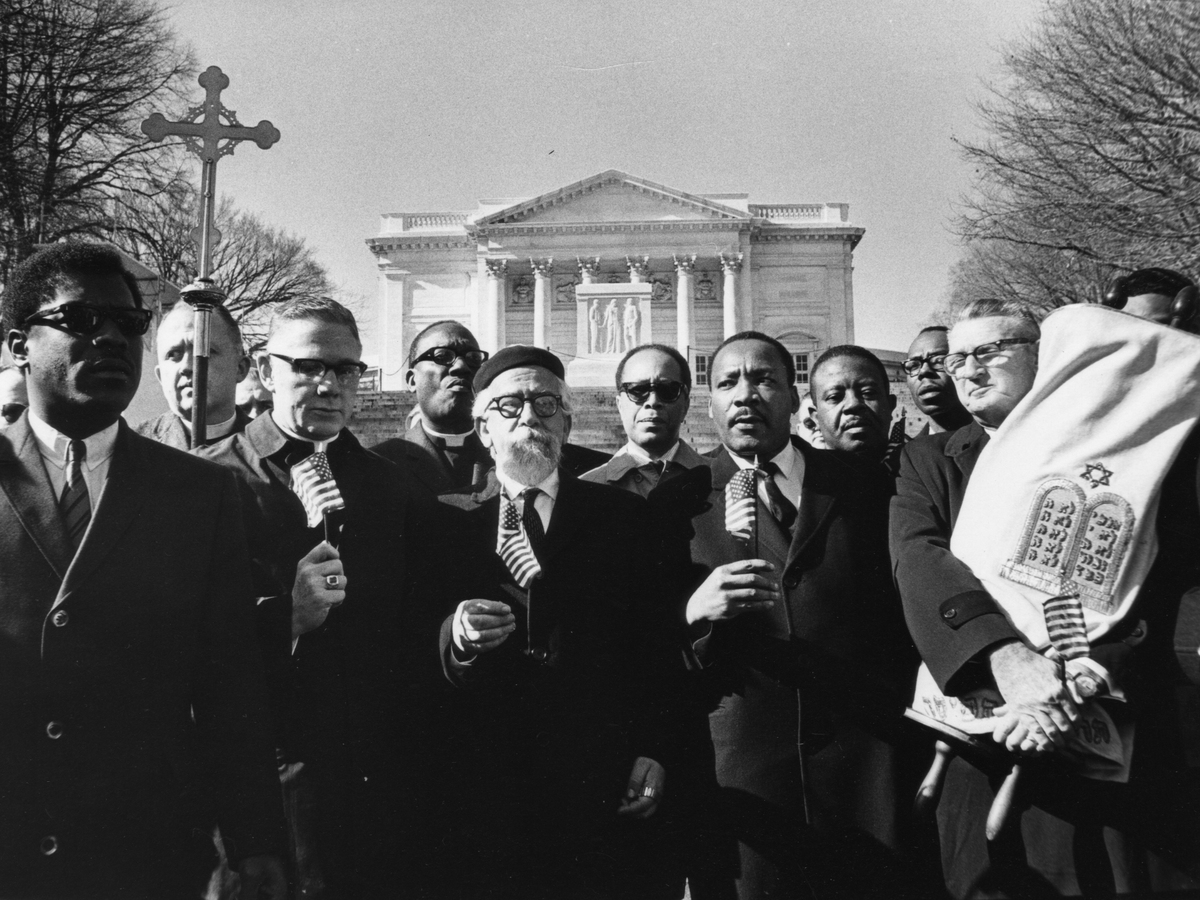 Many Americans tell the story of Black-Jewish political relations like this: First, there was the Civil Rights movement, where the two groups got along great.

This was the mid-1950s to the mid-60s — picture Rabbi Abraham Joshua Heschel and Rev. Martin Luther King Jr. marching arm-in-arm from Selma to Montgomery. And James Chaney, Andrew Goodman and Michael Schwerner, murdered while organizing to register black voters in Mississippi. 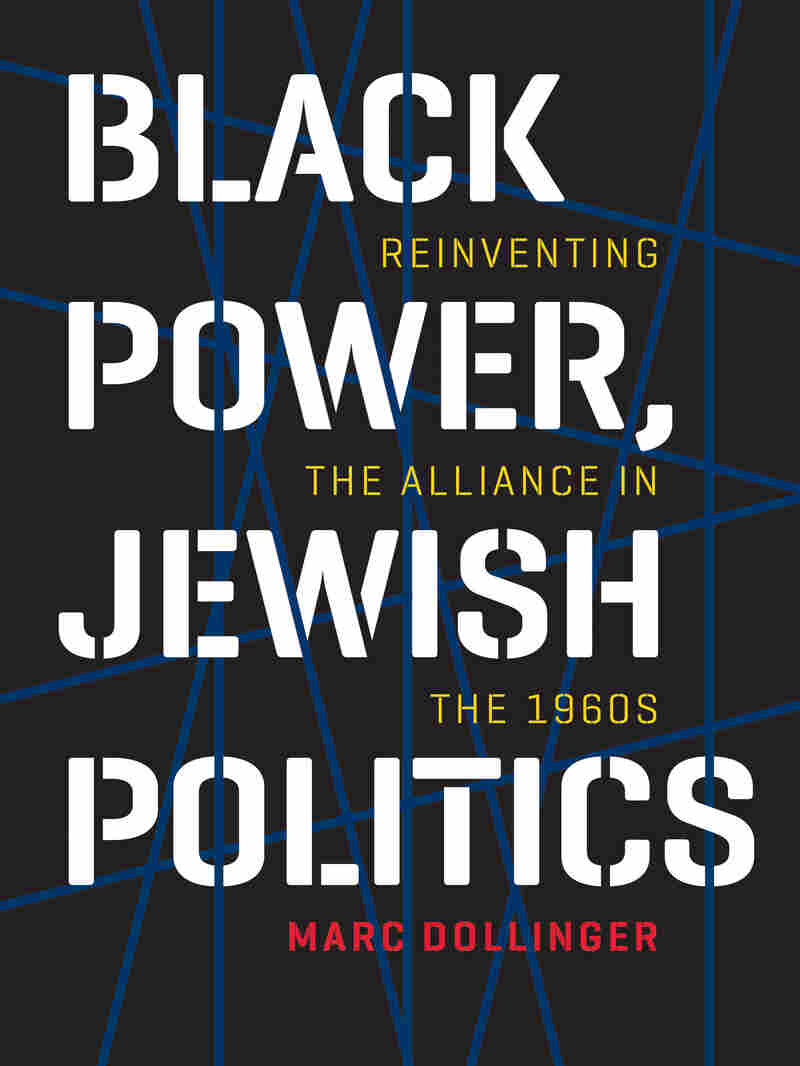 Enlarge this image
Courtesy of University Press of New England 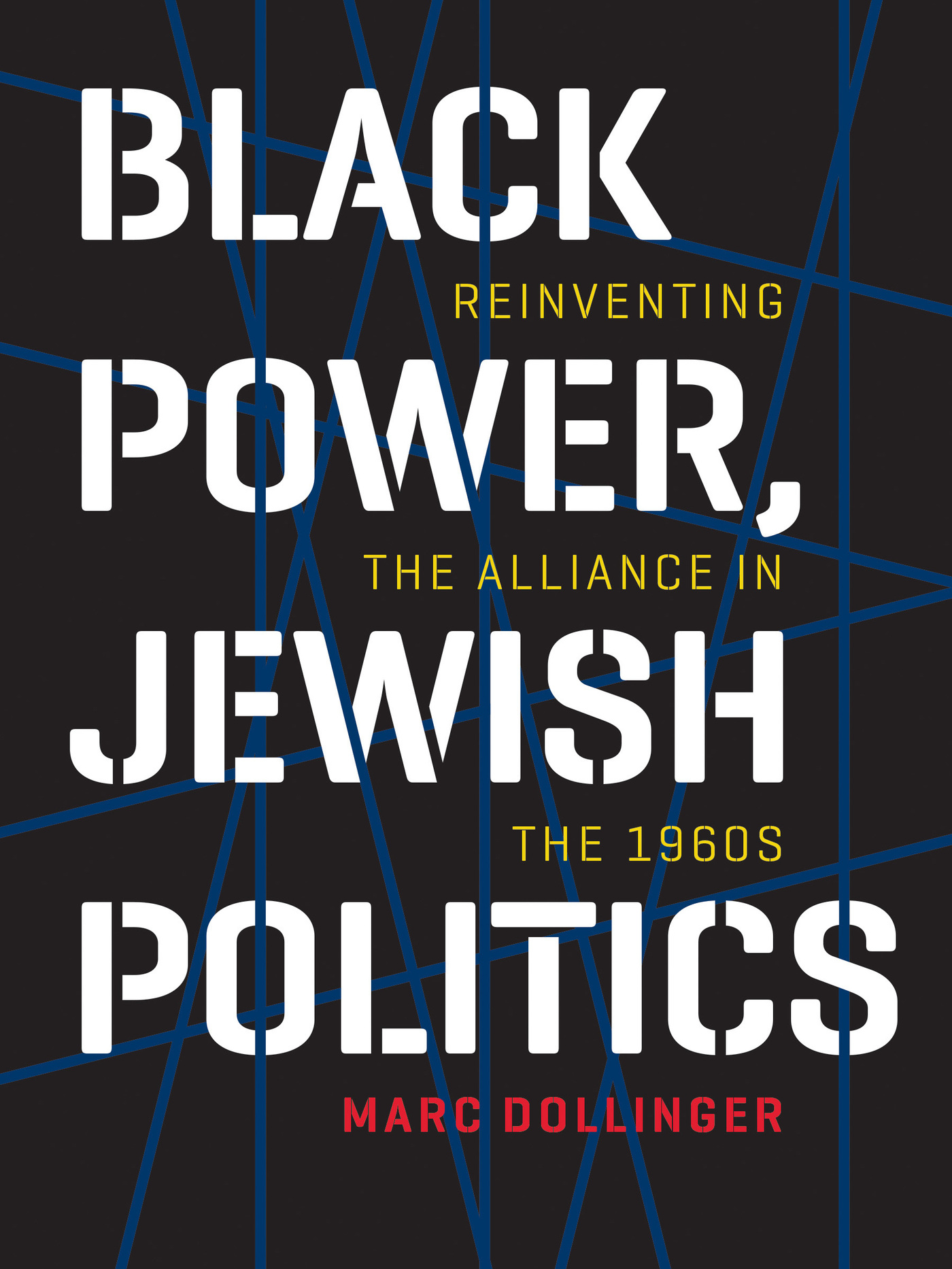 Then, the story goes, there was a shift. In the mid-'60s, with the rise of black nationalism (and what some describe as black anti-Semitism), "the once wonderful alliance dissolved and split. And since the mid 1960s, it's been terrible."

That, says historian Marc Dollinger, is "the accepted wisdom on how to understand Jewish participation in the civil rights movement."

Except, Dollinger adds, that's not really what happened.

He lays all this out in his new book, Black Power, Jewish Politics: Reinventing the Alliance in the 1960s.

Dollinger, a professor at San Francisco State University, argues that much of our accepted knowledge about the interaction between black and Jewish communities is based more on myth than fact. He says uncovering the real story can teach all Americans a lot about privilege, historical memory and the way we construct our own stories.

Our conversation has been edited and condensed for clarity.

You start out your book by recounting the real-life interaction that inspired you to write it. This was a conversation you had with another student when you arrived on the campus of UC Berkeley in 1982 for your freshman orientation.

It was not much of a conversation! (Laughs) I was fresh from the suburbs, showing up at Berkeley; I had my social justice mindset that I was raised with. And the next logical step, I joined the Jewish student group, because that's what you do, in identity politics in Berkeley. And then I'm gonna go up to the black student from the black student group and we're going to, you know, march forward in the struggle. And with naiveté and every good intention, I just walked right up to the table with the African Student Union and introduced myself, and said, "Let's start the dialogue group." And they just burst out laughing at me.

How did you feel in that moment?

First I was shocked and horrified. Then I was embarrassed, you know, because I was revealed, right? I clearly had expectations and thoughts, and they clearly were contested. And I had no idea how or why they were contested.

And that was a moment of self reflection. Because I was not expecting to be laughed at. And to try to explain himself, [the student leading the African Student Union] said, "You have to understand, I'm from Harlem."

I knew what Harlem was, but I figured that was a code that he was sending me, a message, that when you're black and raised in Harlem, it's a little different than if you're white and raised in the suburbs of L.A., you know? And I took that as a challenge and an opportunity to try to figure out what that little exchange meant. 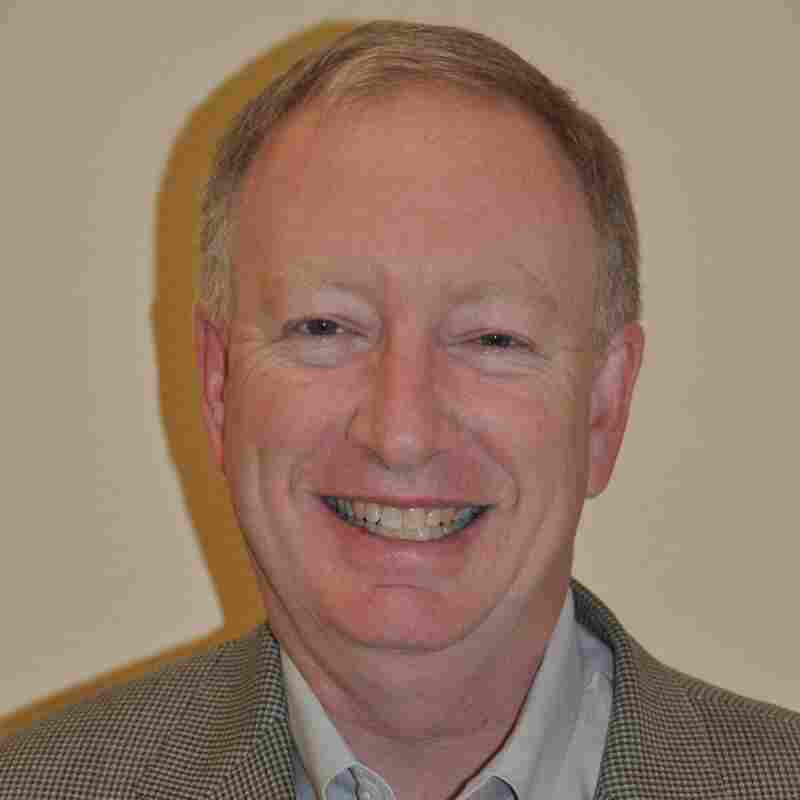 toggle caption
Courtesy of the University Press of New England

So that sort of encounter, where two people or groups have really different understandings of a situation, seems to be a theme in your book. Can you talk about that a bit?

Reinventing the Alliance in the 1960s

So I think that — it's called historical memory, is what academics call it — we tend to remember what we want to remember. We tend to forget what we want to forget. And we tend to spin the evidence to a prearranged thesis. So we — white American Jews — have had a prearranged thesis on the black-Jewish alliance, and therefore it tends to self-perpetuate. And it also is self-serving.

So there are basically three areas advanced for why Jews would involve themselves in the struggle for racial equality. All three turn out to be false. But the first would be the history argument, that says blacks and Jews share a common history, and therefore Jews empathize with the historical experience of blacks, and therefore they're willing to help. Right?

When I talk generally with white Jews about why Jews are involved in social justice or civil rights or racial equality, they'll talk about this shared history of oppression.

And the problem is that American Jewish history and African-American history are 180 degrees opposite on that question. One of my African-American colleagues, he said, "If I ever go to a Seder and the Jews say that they know what it's like because they too were once slaves in Egypt," he's gonna punch 'em.

Because if Jews have to go back to ancient Egypt to get the slavery metaphor, then they've kind of missed that American Jewish history is a story of rapid social ascent, and African-American history is the legacy of slavery. That argument is insulting, and it's very elementary.

And, of course, I found that the people actually involved in the movement in the 50s, they knew that. And they were quite clear that they were not buying into that.

What's the second argument that people draw on?

Eric Goldstein at Emory, in his book, The Price of Whiteness, basically points out that Jews could only cross the racial line after they achieved whiteness, when they were no longer marginal. So that kind of undermines the sociology argument.

Last but not least?

The third one, the one we get today, is Judaism: that the religion of the Jews argues for social justice, tikkun olam. Prophetic Judaism, the Reform movement, is involved with all of that.

The problem is, if one's adherence to Judaism informs social justice, one would expect the Orthodox, those for whom traditional Judaism is most present in their everyday life, to be in the lead in racial equality. And in fact it's the opposite.

Members of Whose Tribe?

The more religiously traditional, the less engaged [Jews are] in social justice. And the ones that were going to Mississippi getting killed were [for the most part] on the left, were secular, were not involved in synagogue life. And socialist and communist Jews were, in fact, a whole lot more empathetic to the [racial justice] cause than religious Jews.

So you make the argument that American Jewish leaders actually drew a lot of inspiration from the Black Power movement, during the period that many people think the black-Jewish alliance was splintering. And that the rise of black nationalism helped inform Jewish political movements, including the Soviet Jewry movement, a spike in Jewish support for Israel and a revival of public expressions of Judaism. What happened?

So my book starts in the 1950s, and points out that Jewish leaders who were involved with the interracial alliance — and this is of course the white Jewish leaders — absolutely understood the limits of white liberalism, and predicted that the black-Jewish alliance would end. So it was actually not a big shock or surprise [to them.]

And the second piece is that the rise of black nationalism not only didn't negatively impact Jewish leadership — in fact, Jewish leaders leveraged the thinking of black power activists to strengthen Jewish identity in many of the ways that black power was strengthening black identity.

So really what happened was, the consensus of the 1950s that was blacks and Jews together, became a new consensus of the late '60s and '70s, with each of the communities doing the same thing apart. And I saw that both communities were borrowing back and forth through nationalism as a consequence of the rise of black power.

Can you give an example?

Zionism is a good example. In 1948, when the state of Israel was created, American Jews were happy, especially after the Holocaust, and thankful that there is a Jewish homeland. But they weren't dancing in the streets, as it were.

After 1967, when the state of Israel won the Six Day War, the reaction of American Jewish youth was so pronounced that even national Jewish leaders were surprised — 7,500 young people got on airplanes and went to Israel to help, literally. Something like 98 percent of American Jews expressed strong sympathy for Israel.

And while the traditional thinking is, you know, Aren't Jews great because they became Zionist in '67? as a student of American Jewish history, I'm really curious why the reaction was stronger in '67 than even in 1948. So when I did the research, I learned that the rise of black nationalism and the purge of Jews from leadership and civil rights organizations, got Jews thinking about their own nationalism.

You know, if blacks can advocate for blackness, then Jews can advocate for Jewishness. And in this sense, the Six Day War occurring in June of 1967 was perfectly timed to capture a whole bunch of young Jews who were nationalists in their proclivities, but didn't have a place to put it. And there they could put it in Zionism.

This book focuses mainly on the events leading up to, and immediately following, the civil rights movement of the 1960s. What message does it have for readers today?

I tell this story in the hopes that, even in the contemporary period, folks can take a deep breath and pause, whatever their initial reaction will be, to, you know, Black Lives Matter, the Women's March, Farrakhan, Nation of Islam, all the topical issues now, and they'll be better informed to understand the dynamics if they understand and see what actually happened over the last 50 or 60 years.

Clearly in Trump's America, we have a variety of different constructed narratives, and everyone's got a bunch of facts to prove that they're right. And everyone is internally consistent, and nothing that anyone else says on the outside matters, you know, because they've got it right.

So I wanted to upend that entire way of thinking to say that the job of a critical thinker — I would like to say a good American — is to critically investigate your own constructed narrative to break it down when it needs to be broken, and to be willing to listen to entirely different ways of even framing and understanding.