Accessibility links
Standing Up And Breaking Fast: Taking Ramadan Dinner Into The Streets : Code Switch Iftars are the meals eaten after sunset to break the daily Ramadan fast. Activist Linda Sarsour says Ramadan is a time to be unapologetically Muslim and fight for justice.

Standing Up And Breaking Fast: Taking Ramadan Dinner Into The Streets

Standing Up And Breaking Fast: Taking Ramadan Dinner Into The Streets 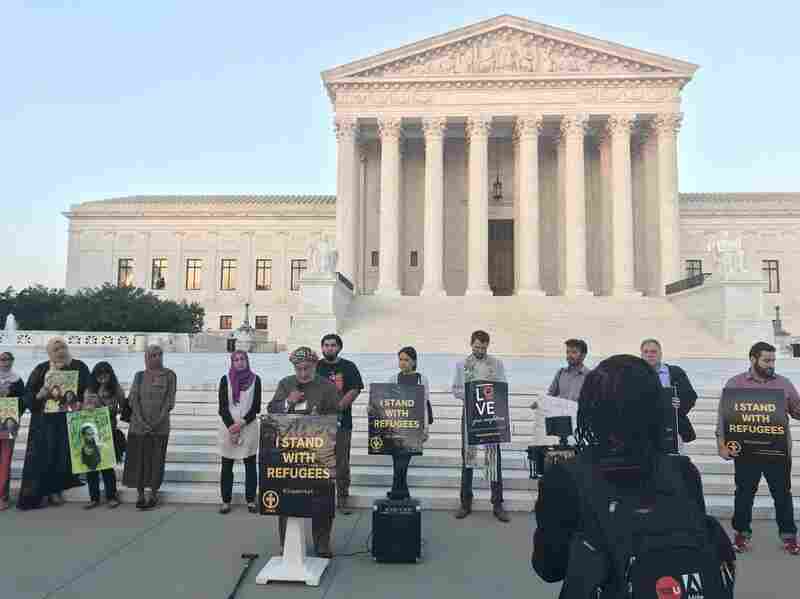 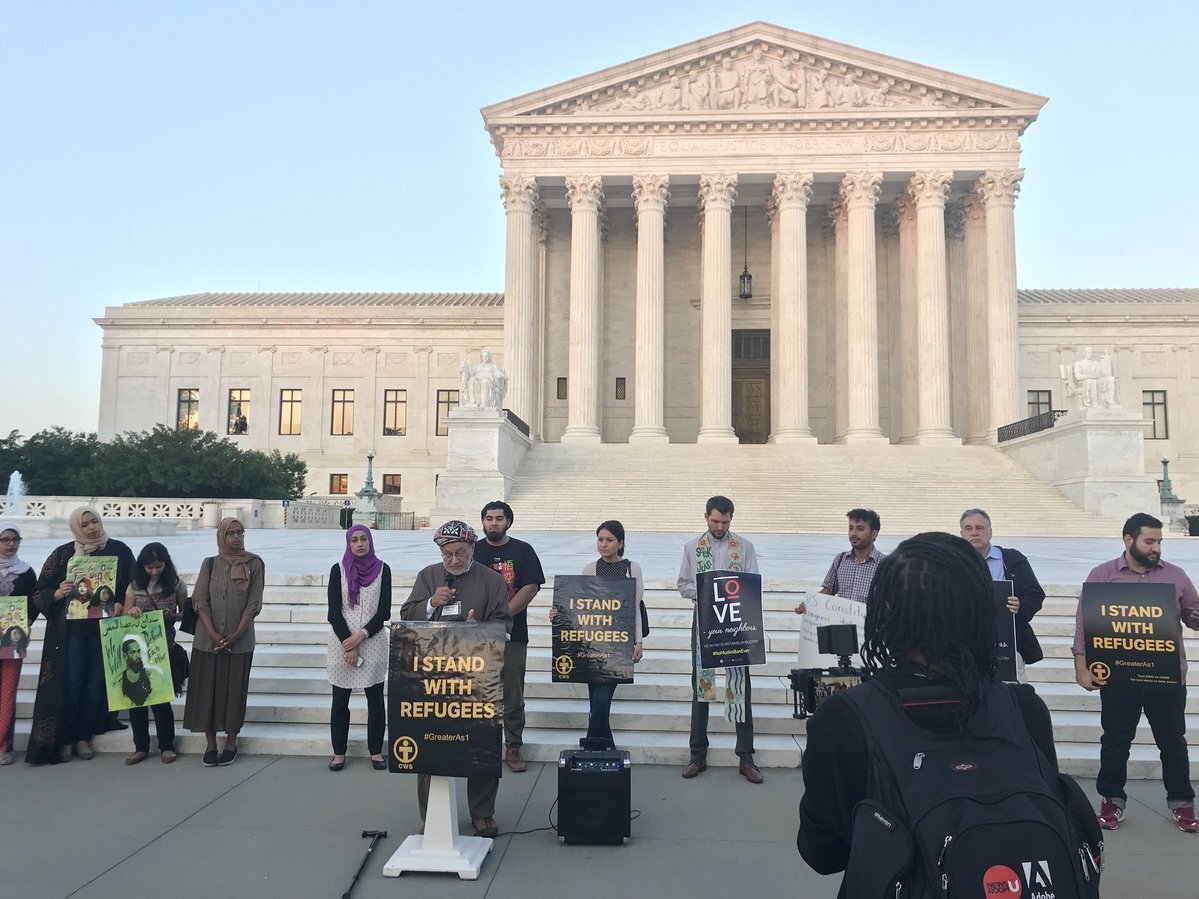 Members of MPower Change and allies stand in solidarity for refugee rights on the steps of the Supreme Court before breaking fast.

Most of the time, iftars are family gatherings, held in homes or mosques during the holy month of Ramadan as people sit down to break the daily fast.

But for the second year in a row, an online Muslim organization MPower Change is taking iftar out of the home and into the streets.

So far this year, they've staged protests on the steps of the U.S. Supreme Court in Washington, and in front of an Immigrations and Customs Enforcement office in New York City. They've had other gatherings in Tempe, Ariz., San Francisco and Houston.

The goal is to draw attention during the holy month (which this year began in mid-May and is projected to end June 14) to some big issues: notably immigrant justice and refugee rights. And it's not just Muslims taking part. Other activist groups, including Jews for Racial & Economic Justice, the Asian American Federation and African Communities Together have joined in as well.

Linda Sarsour is a prominent Muslim activist, a co-chair of the 2017 Women's March and co-founder of MPower Change. She says these events often start out as protests and end up with people breaking bread and celebrating.

Our conversation below was edited for clarity and length.

How did this campaign come about?

The idea came up last year, after the inauguration of the President of the United States, and the Muslim ban had immediately come out a week later. Ramadan was around the corner, and we wanted to find ways to build solidarity, build community and build morale, in particular for the Muslim-American community and our Muslim immigrant community. We felt that "Iftar in the Streets" was a way to say: Look, we're unapologetically Muslim. We're going to be Muslim in public. We're going to break fast, and our allies are going to come and join us.

Who is involved in the iftars?

In New York City, for example, our partners were the New York Immigration Coalition, which is the largest immigrant coalition in the state of New York. As well as Jews for Racial & Economic Justice, the Arab American Association of New York.

Were you concerned about safety at all?

Safety, for me, is always a concern as a public Muslim activist, and it's a concern for me when we have to pray outside. The way in which Muslims pray, there's a lot of prostration and it's really hard for people who are praying to be aware of their surroundings. And we also did have protesters, so it was beautiful to have people protect us while we were praying the Maghrib prayer, which is the evening prayer before we break our fast.

What message do these iftars send?

Look at the faces of the people who are willing to stand with you: They're Muslim, they're Jewish, they're atheist, they're LGBTQ, they're black, they're brown, they're undocumented and they're also U.S. citizens. So that's important for us.

How does diversity play a role in these iftars?

One of the things that we are bringing to the table is that the Muslim-American community is one of the most diverse faith communities in the country.

We have many who come from the African continent as well as people from South Asia, Southeast Asia, the Middle East and of course, as you know, white converts here from the United States. So our organization is about making sure that not only do we reflect the community that we come from, but we also are projecting our progressive values as Muslims.

A lot of the Muslim organizations nationally are focused on issues of civil liberties, on hate crimes impacting the Muslim community, or organizing around the Muslim ban. We are an organization that is organizing Muslims around issues of police brutality, or issues around immigration and supporting DACA. We were partners with the Women's March. We are inserting our voices in a lot of these conversations.

With it being Ramadan, are these iftars a celebration? A protest? What is the tone?

It's kind of like a diverse tone. So obviously it's a celebration. MPower Change and our allies host people so we actually provide dinner to every single person that comes to our Iftar in the Streets. But when we start, we remind people why we're there. We have speakers who speak about their commitment to justice, about standing up, about fighting back. So it's a mixture of starting it out with a bit of protest and purpose, and then being able to then end it out by praying and breaking fast with our allies and friends.

What do you hope people will take away from these iftars?

Last year, we started with two iftars and now we're close to a dozen around the country and having it on social media and a lot of people sharing their experiences in hopes that more of these iftars in the streets happen. I think that Muslim communities need morale boosters. To pray, for us, outside right in Foley Square in front of an ICE headquarters is a very powerful display of being unapologetically Muslim, in a country where our government, and oftentimes officials, tell us we don't belong here. So the hope is that more people organize these, more allies join Muslim groups around the country.