Accessibility links
Opinion: Don't Sweat The #Repsweats And Let 'Crazy Rich Asians' Be What It Is : Code Switch NPR Code Switch reporter Kat Chow writes about the burdens imposed on representations of Asians and Asian-Americans in pop culture — even in a fun, frothy rom-com. 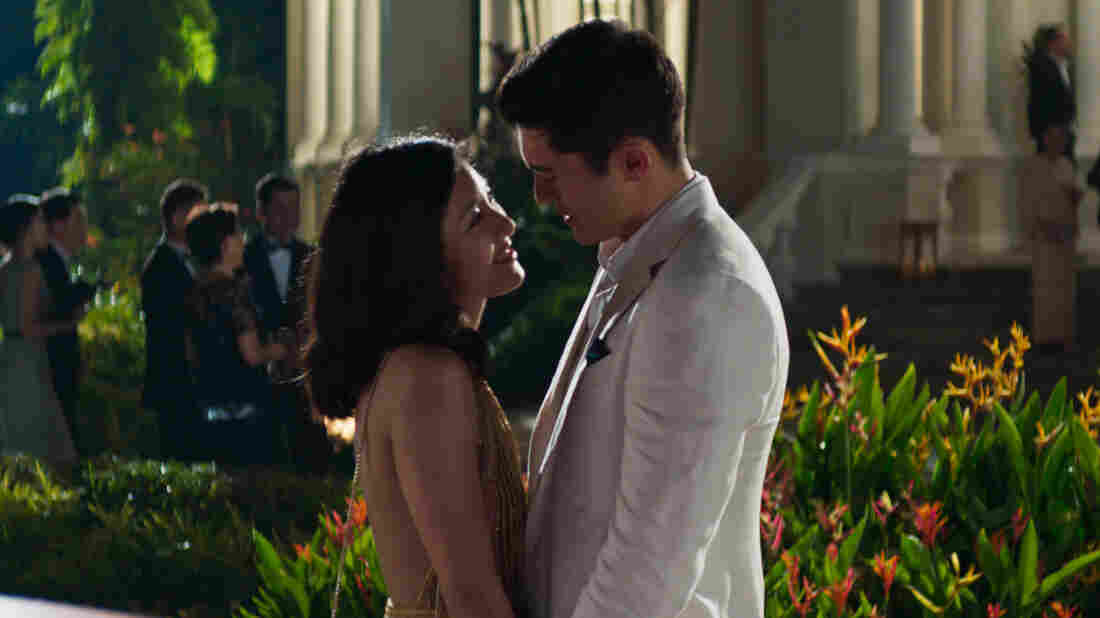 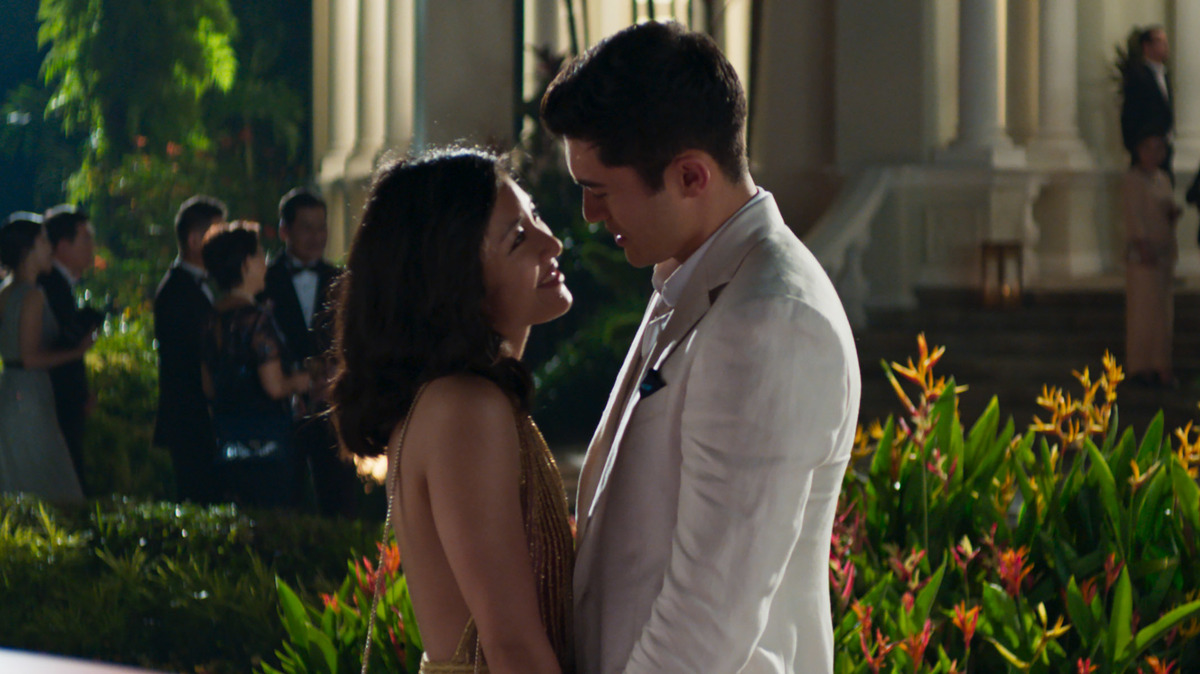 I first saw Crazy Rich Asians at an advance press screening at a small, newish theater in Manhattan's Chinatown, and let me tell you: I arrived a little anxious and skeptical.

If you've spent more than five minutes with me, you'll know that I am predisposed to those two emotions. It did not escape me that the theater holding the press screening could be considered still another gentrifying force in rapidly changing Chinatown. The fact that I and the friend I brought were one of the few Asian-Americans in the theater also did not escape me.

It concerned me. It distressed me.

As soon as we plopped in our seats, my friend and I launched into a game that most people of color have been playing since we came out of our mothers' wombs. I like to call it Count The Asians; maybe you call it Count The Black People, or Count The Latinx. The rule of the game is simple: You look around the room and begin tallying how many people look like you. It's a game that is, in theory, a demographic census, but in practice, it's a depressing exercise in owning yourself. The prize you "win" at the end is an understanding of how alone you are and an existential fear that you'll always exist on the outskirts.

This time around, we counted five or six other Asians. Almost everybody else was white.

I worried what this audience would make of the movie. Would they get the jokes? If they laughed a ton, would it mean this movie wasn't meant for me? What would all this suggest about its eventual box office take? What did this say about how the movie was being marketed? I knew that in LA, publicists had tried to create buzz among many different Asian-Americans with pre-screenings there. Still, who knew? I craved seeing the movie with an Asian-American audience and wondered whether doing so would change my reaction. So with all of this settling into my slippery-slope lizard-brain, I braced myself for disappointment.

Granted, it's impossible to watch this movie in a vacuum. I had heard some friends who had scored seats at earlier press screenings debate whether they liked it and whether they felt their experiences were reflected. They had split reactions: It was thoroughly enjoyable, one argued. It had very little do with being Asian, the other insisted. I was already wearied by the onslaught of think pieces heralding how this movie would be the first major movie with an all-Asian cast since Joy Luck Club, and felt: There's no way we can expect one piece of culture — one movie, one TV show, one book — to do everything for everyone.

Around the time Black Panther rolled into theaters, some Asian-American writers had tweeted that they hoped Crazy Rich Asians could be Black Panther for us. I understood that kind of yearning for representation but felt it wasn't possible to compare the two films. Black Panther offered an empowering vision of black people who had resisted colonialism and whose existence had not been fundamentally and irrevocably altered by slavery.

'Crazy Rich Asians' is an engaging, funny romantic comedy, and it should be allowed to be just that.

Crazy Rich Asians is not a movie that intends to tackle heady issues of race or colonialism directly; rather, it sets out to tell a love story, in the vein of Cinderella, and to poke fun at the opulence of the wealthy. It shows very plainly how a Chinese-American woman named Rachel Chu (Constance Wu) navigates a very specific household in a very specific neighborhood in a very specific Asian country. I could put on my cocktail party voice and ramble on about how one could probably argue that the movie embodies the undulating predicament of constantly being an outsider-insider and what things like place and origin and diaspora have to do with that and how that's all very much an immigrant thing, but I won't. Because to me, that is all beside the point.

Crazy Rich Asians is an engaging, funny romantic comedy, and it should be allowed to be just that.

Afterward, my friend and I stood in the lobby of the theater munching on the "chicken a la chinoise" — fancy General Tso's, yes, really — that the publicity team had set out. We rattled off our initial reactions and compared notes. Awkwafina (playing Peik Lin, Rachel's eccentric friend) stole the show, we agreed. Michelle Yeoh made for a terrifying mother. That teeny joke in the beginning about there being so many Rachel Chus — and was their last name spelled Choo, Chiu, Chew, Chu? That for some reason made me howl with laughter, even as the rest of the audience was silent. The outfits? Dazzling. The movie made me sigh and pine over the abs of Nick Young (played in the film by Henry Golding's toned stomach), and a pivotal mahjong scene even inspired me to learn the game myself one recent weekend.

When I was first asked to write about Crazy Rich Asians, I'll admit that I wanted to bang my head on my desk. I felt like I had already been here many times before when writing about Fresh Off The Boat when it first aired or the controversial character Dong in Unbreakable Kimmy Schmidt and how much pressure gets placed on both. I thought about a late-night conversation I had with a friend the night I first saw Crazy Rich Asians and couldn't sleep. He is a cultural critic, and he confessed to feeling a similar initial dread: I almost just want to let it be, he said.

So often, when we discuss movies or TV shows for or with Asian-Americans, or any group of people of color, we demand it be everything for everyone. It's an unfair burden. We feel #repsweats, a term comedian Jenny Yang coined a few years back when discussing the launch of Fresh Off The Boat. It's the idea of sweating it out over representation, that feeling of: I don't even need to like this thing, but I need it to win, and the conviction that the thing in question has to be the best, so it can pave the way for more, since it's the only one of its kind.

I think there are valid critiques out there of Crazy Rich Asians: how Singapore is portrayed without its blemishes, how the country's Indian and Malay populations are all but nonexistent in the movie, how the film could say more about the overseas Chinese and their dominance in Asia. What all of this gets at, of course, is our need to have our stories told. But to demand that this movie meet the disparate needs of every person who sees it would be to force this movie to carry the sky on its shoulders, an overextended Atlas.

I went to second press screening, with a nearly all-Asian-American audience this time, at a conference for Asian-American journalists. To watch the movie with a group of people who have similar cultural reference points — who have been similarly deprived of seeing our own faces on the big screen — was a communal experience.

The crowd broke into whoops when shirtless torsos appeared, and I swear the woman in front of me was swaying in her seat to the Cantopop songs that dotted the soundtrack.

When Awkwafina, Ken Jeong and even Harry Shum Jr. appeared on-screen, there were shouts of acknowledgment, like people were seeing old friends for the first time in years.

The cheers lasted through the credits, and it seemed that nobody wanted to exit the theater, like we didn't want to leave this moment behind.

Still, I couldn't help but think back to my first time seeing it. As my friend and I had walked out of the theater and into the streets of Chinatown, she turned to me. She had cried through much of the movie, having felt that it was the first time something close to her experience as a Chinese-Malaysian had been represented.

Not because she was rich or crazy, but because witnessing such specific elements of her life show up on-screen — bits of "lahs" and other ways of speaking, the sight of foods from that region — had made her feel that a part of her had been validated. "I dunno though, maybe this will be something we'll all hate in 40 years."

I laughed. "Maybe," I said. But I understood her sentiment right away. In 40 years, I hope that there are countless more movies that represent this enormous Asian-American experience, where everyone in this hard-to-pin-down identity feels like bits of themselves are reflected back at them.

Until then, I'll take this romantic comedy for what it is, and enjoy the ride.