Accessibility links
'Crazy Rich Asians': Love, Loyalty And Lots Of Money : Code Switch The best-selling novel about Southeast Asia's super wealthy is now a movie. Jon Chu is the director. The movie's themes of identity, class and family are universal. 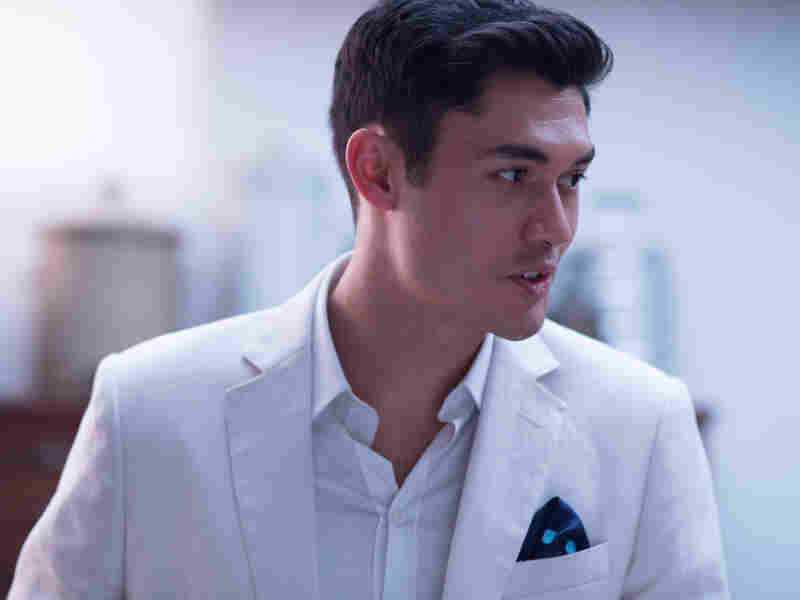 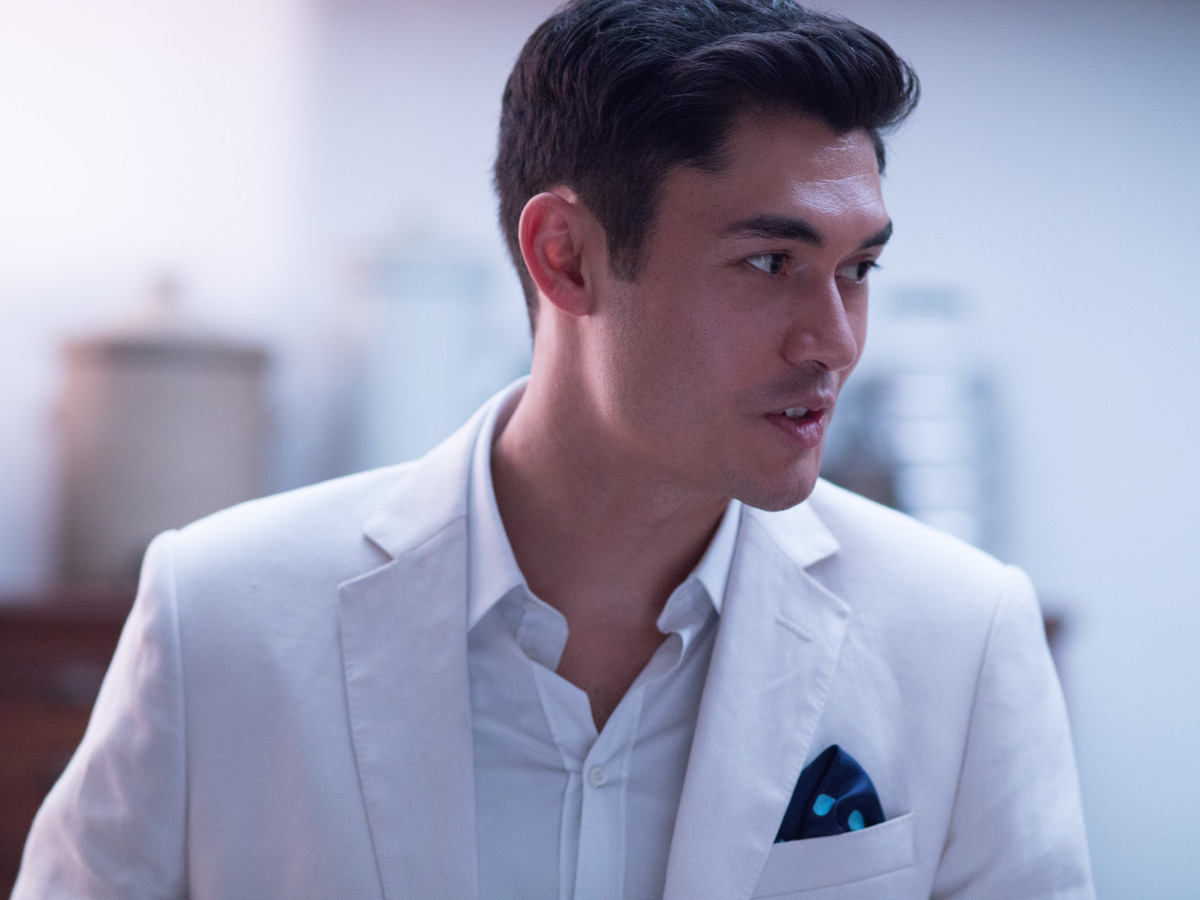 Crazy Rich Asians is a love story on multiple levels. On its surface, it's about the love between Rachel Chu (Constance Wu) and Nick Young (Henry Golding), two very attractive thirty-something NYU professors. But it's also a story about love of family: Nick's mother's love for him, and for the family she married into and for which she is prepared to sacrifice everything (perhaps even her personal happiness.) And it's about a love of Asian culture, which, like all cultures, can be an embrace or a prison, depending.

Director Jon M. Chu, whose parents immigrated from Taiwan and China, says everyone involved in the film knew the stakes were high—it was the first romantic comedy in years featuring two Asian principals and an almost completely Asian cast. They knew the burden of representation would be staggering.

But they decided to go big or go home: "Everyone had to agree that this wasn't just a romantic comedy we were doing," Chu told me, while he oversaw cuts in his editing room. The cast and crew also decided "that it was very important that the culture was a part of the story itself, part of the characters themselves."

So the exploration of tension between Nick and his mother Eleanor (played by the sublime Michelle Yeoh) is based in a culture clash. Nick is the scion of one of the biggest, wealthiest real estate developers in Singapore, and he will, eventually, return as expected, to run the family's huge conglomerate and take his place as the head of Singapore society.

But for now, he's a regular guy who travels by public transportation, cleans his own modest apartment and has a frequent-user card to Jamba Juice. He's in love with Rachel, who has been raised by a single mom and who comes from a truly modest background. When they travel to Singapore so Nick can be in his best friend's wedding, she discovers he's rich — or, in the words of writer Kevin Kwan, on whose book the movie is based — crazy rich.

"It's amazing to see what the economic boom of the past thirty years has done to Asia," Kwan says, "and how profoundly it's affected the rest of the population." That wealth inspired him to write Crazy Rich Asians. "I felt that no one was telling the story of contemporary Asia, the Asia I know, the Asia I see when I travel there."

Eleanor Young is mistress of Tyersall Park, a colonial-era mansion set on wide green lawns and protected by high gates. Eleanor's coolness when meeting Rachel is not so much about the latter's lack of money, but because she knows that marrying into her family comes with a lifetime of responsibility and obligation. And as an American-Born Chinese, Rachel has been brought up with differently. That doesn't make Eleanor a monster, Yeoh insists; it makes her protective of the family.

"(Rachel's) from a society where you are taught to be independent, to take care of yourself first, and everything else comes after that," Yeoh explains. "I think that she was really trying to make Rachel understand that unless she was willing to be really self-sacrificing, that it would be very difficult on her. Even though she was Asian, she was not brought up in Asia."

And that's one of the central tensions in the movie: sharing the same ethnicity doesn't mean you share the same culture. Some of Nick's friends, born in Singapore, Malaysia, Hong Kong and other places, consider Rachel more American than Chinese. They think her open friendliness, J Crew wardrobe and transparency about her working class background definitely eliminates her as The One for Singapore's golden heir apparent. And the fact that Nick chose Rachel, rather than one of them, makes her a target for barely-disguised shade and bullying.

Romantic lead Henry Golding can sympathize with being told he's less-than. When he was announced as Nick after a months-long search of hundreds of good-looking Asian and Asian-American men, there was some immediate backlash on Twitter.

Golding is undeniably handsome, with an easy charm. He's also biracial. His mom is from an indigenous Malaysian tribe and his father is English, and parts of the Twitter-verse were feeling some kind of way about a hapa guy getting this plum role. Golding, who is known in Singapore as the host of a travel show, says people with biracial identities are having their own moment, so the movie's timing is interesting.

He's also quick to point out, "I was born in Asia. I grew up in Asia. I've lived in so many Asian cultures." And, he says, "I'm definitely more Asian than a lot of people who have never been to Asia but by blood and by race say 'I deserve to be Asian.' I've worked really hard to be Asian, and I think I'm Asian enough."

To make an all-Asian movie requires a lot of Asian actors. Jon Chu says he told Warner Bros. from the beginning he'd need to cast a wide net, and they anted up. After putting out a callout on YouTube, he got a ton of video auditions. Then he hired casting directors in several countries to see some of the actors who auditioned. Some of those people ended up in the movie (although they were for small parts; except for Golding, who'd not acted before, most of the roles went to professional actors.)

"And," Chu says with satisfaction, "now we have a database of hundreds and hundreds of English-speaking Asian actors available to Hollywood." So there should be no reason to cast anyone who isn't truly Asian as Asian on-screen.

The expectations for this movie are overwhelming, and not everyone is happy at the buzz around it. E. J. David is Filipino, and teaches cross-cultural psychology at the University of Alaska, Anchorage. When he posted a tweet in April that pointed out the movie was populated with one kind of Asian—South East Asians--it went viral.

There were a lot of negative responses, many people felt he shouldn't be critical of this rare moment of representation. David says he gets that: most people were so starved for representation they didn't want to ding the film. But David, who writes about Filipino identity, says it's important to note some uncomfortable realities: the wealth on display in Crazy Rich Asians, he tweeted, "is based on the exploitation of brown Asian labor. In Singapore, where the movie happens, 56% of domestic workers are Filippino and 32% are Indonesians. The movie erases them."

David doesn't buy the popular positioning of Crazy Rich Asians as the first all-Asian cast since The Joy Luck Club. "I'm not a movie buff by any means, and I'm not an Asian-American movie watchdog at all, but I don't think that's true." For instance, he says, what about The Namesake, starring Kal Penn and directed by Mira Nair? It looks at many of the same issues raised in Crazy Rich Asians—obligation to family, respect for culture—but with South Asian characters.

"So what is it," David asks. "Brown Asians don't count? That's pretty offensive."

Jon Chu says this single movie cannot be everything to everybody. He hopes if Crazy Rich Asians succeeds, other movies featuring more types of Asians will follow. But for now, he's made this movie for this reason: "I'm making it for my own, 12 year-old self, and my (infant) daughter, and the generation that's coming."