Accessibility links
Ready For A Linguistic Controversy? Say 'Mmhmm' : Code Switch Mmhmm is a small word that's often used unconsciously. But it can actually tell us a lot about language, bias and the trans-Atlantic slave trade. 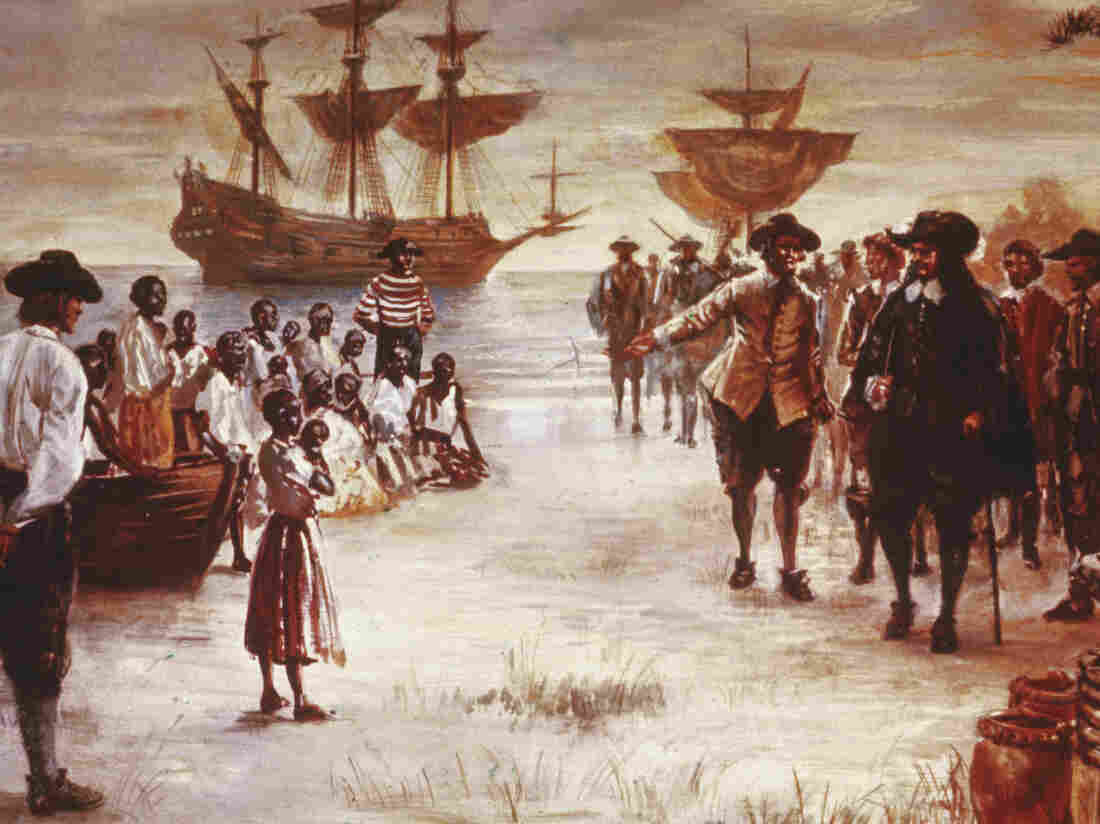 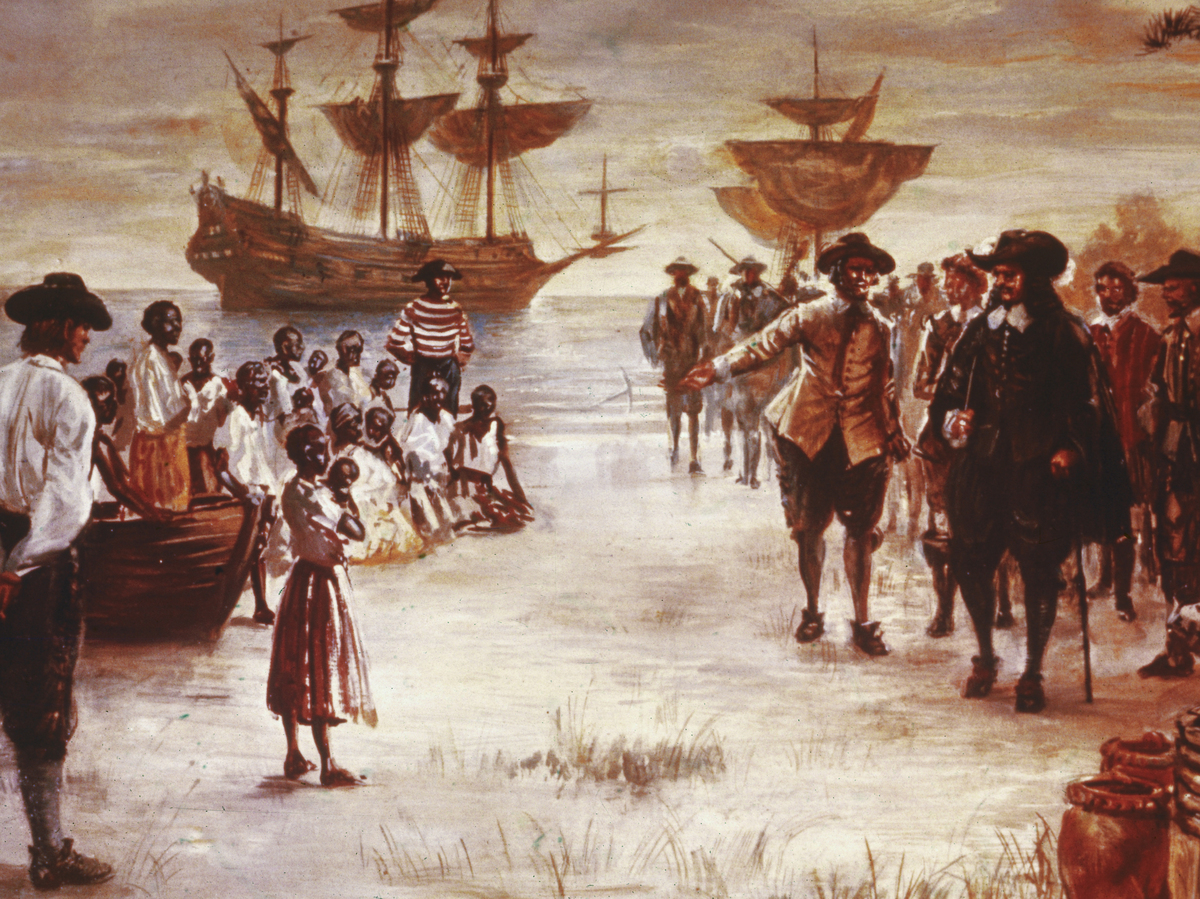 Engraving shows the arrival of a Dutch slave ship with a group of African slaves for sale, Jamestown, Va., 1619.

Pop quiz: What's a word you use a hundred times a day — that doesn't show up in the dictionary?

You got it! Mmhmm is a small word that's often used unconsciously. But it can actually tell us a lot about language, bias and the trans-Atlantic slave trade.

Once upon a time, English speakers didn't say "mmhmm." But Africans did, according to Robert Thompson, an art history professor at Yale University who studies Africa's influence on the Americas.

In a 2008 documentary, Thompson said the word spread from enslaved Africans into Southern black vernacular and from there into Southern white vernacular. He says white Americans used to say "yay" and "yes."

(By the way, no one really seems to know how to spell "mmhmm" — we're guessing here, too.)

But it's tough to verify whether Thompson is right.

And there's a reason for that: Tracing the linguistic path of mmhmm, and many other words commonly used today, from West Africa to the U.S. South is difficult, is riddled with controversy — and experts say it has lingering effects on how the speech of African-Americans is perceived.

When enslaved people spoke African languages, it often instilled fear in Southern plantation owners. That's according to John Rickford, a linguistics professor at Stanford University. He says plantation owners worried that the slaves were plotting against them. Because of that, slaves were forced to speak English exclusively.

The African words slaves did preserve were ones that could pass as English — words that could "mask their ancestry," as Rickford puts it. But because those words sound like English, they can be difficult to identify as coming from African languages.

Some of those words scholars have been able to trace. Goober — the slang word for peanut — is from a Bantu language, says Sarah Thomason, a linguist at the University of Michigan. Banjo comes from the Bantu word mbanza, a stringed instrument played in some parts of West Africa. The word okra comes from nkruma, which is from the West African language Akan.

As for mmhmm? Historians and linguists disagree.

Ugo Nwojeki, a professor of African-American studies at the University of California, Berkeley, says he "always assumed" that the word was African. Lev Michael, a linguist at the same school, says that "doesn't seem very plausible." Roslyn Burns, a linguist at UCLA, says "it's hard to say."

So does any of this matter, in the scheme of things? The project of tracing words like mmhmm — with alleged African roots — has always been contentious.

The 20th century anthropologist Melville Herskovitz wrote about the biases that shaped historians and linguists of his time. He tried to demonstrate that many of his peers believed African culture was inferior to European culture — and that bias prevented them from recognizing the African influence in English words.

In Herskovitz's time, there were a host of racist conceptions about the way black people spoke.

Many linguists and historians claimed that black dialects in the U.S., for the most part, came from black people's inability to pronounce English words properly. In his 1941 book, The Myth of the Negro Past, Herskovitz debunked that claim. By taking a closer look, he found that thousands of words that had been misunderstood as badly pronounced English actually had African roots.

The same held true for grammar. Many linguists believed that black dialects simply had no grammatical order.

But Herskovitz wrote that black dialects used "European words cast into an African grammatical mold." He said that when you learn a new language, you learn vocabulary first and grammar second. So when slaves arrived in the U.S., they picked up English words from their masters and then organized those words based on the grammar they already knew.

Good points, all, but some experts worry about carrying this idea too far.

Burns at UCLA says people sometimes overemphasize African influence in American English. She notes that a lot of commonly known characteristics of African-American English can be found in Old English, too. For instance, many people believe that using double negatives ("you ain't got nothing") comes from African speech patterns. But that construction was being used in English long before slavery.

To an extent, Stanford's Rickford agrees: Slaves were required to learn the language of their masters. That's why black Americans speak English and not Yoruba.

But Rickford is quick to add that "people tend to think that as soon as some white people use [a word], that means it has a white source." In other words, "the idea that everything comes from English settler dialects," he says, "is ludicrous."