Accessibility links
Widening The Lens: Integrating The Toronto International Film Festival : Code Switch The reckoning that is reshaping Hollywood is finally making its way to the critic's perch. 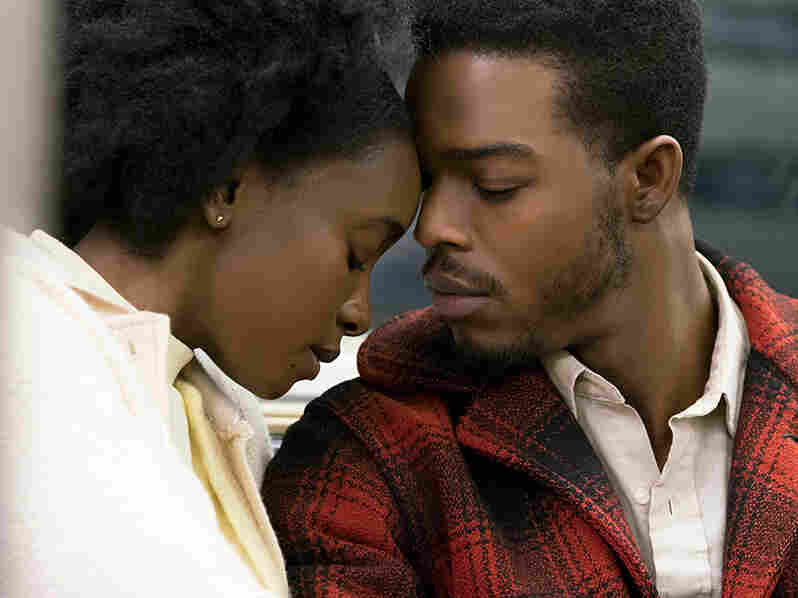 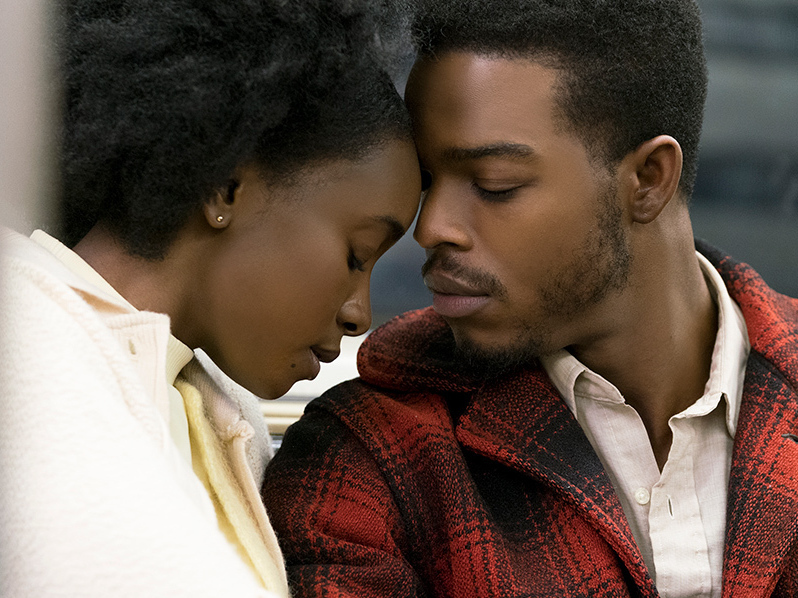 Barry Jenkins' adaption of James Baldwin's novel "If Beale Street Could Talk" premiered at this year's edition of the Toronto International Film Festival.

"Rapturous," "Soaring," "Masterful!" It's that time of year again when critics use their hyperbolic best to preview the fall's most anticipated films. Starting at the end of August, studios show their Oscar hopefuls to accredited press across a trinity of prestigious film festivals – Venice, Telluride, and Toronto – the last of which concluded on Sunday night.

At this year's Toronto edition, the headlines were awash in Lady Gaga's soaring big-screen debut in "A Star Is Born" and Alfonso Cuarón's masterful memoir of his Mexican childhood, "Roma." Accredited critics were debating whether the Gaga-issance could triumph over the rapturous return of Best-Picture winners Steve McQueen and Barry Jenkins.

But for the past few years, the insular — and homogeneous — world of critical consensus has been disrupted by a new generation of writers, most of whom are neither accredited, nor paid to attend film festivals. Last year, "Three Billboards outside Ebbing, Missouri" earned rave reviews at Toronto, even winning the festivals' prestigious Audience Prize. Then the backlash – or blacklash - began. Similarly, Louis C.K.'s "I Love you Daddy" was one of the year's hottest festival tickets, igniting early Oscar buzz and studio bidding wars - despite the discomfort about the film's sordid themes expressed by several women critics. Subsequent revelations of sexual misconduct against the star derailed the film's momentum. It was never released.

Cameron Bailey, the artistic director of the Toronto International Film Festival, says he has been watching the growing disconnect between the festival's elite "critic class" and the larger public. He says "...we don't want a discrepancy between how films are received at the festival and in the general public." He says films today must now face Twitter and "...people who used to be able to reflect on films and have their analysis become the received wisdom on a film, those days are over now."

The consensus that made the Oscar season a straight line from Toronto to the Oscar stage is broken...with cinema itself under a new kind of scrutiny. From #MeToo to #OscarsSoWhite, the social-media fueled revolutions around film have punctured the once guaranteed agreement on what constitutes a masterpiece.

Earlier this summer - amid the ongoing reckoning with the representation of women and minorities on and off screen - the University of Southern California's Annenberg Inclusion Initiative published the first major research study to explore the demographics of film criticism itself. "Critic's Choice 2," an updated version of the study, was shared in Toronto and revealed that almost 80% of film reviews from 2015-2017 were written by men, with underrepresented communities forming a small fraction of reviews. According to the study, 13% of film reviewers were men from underrepresented backgrounds and only 3.7% of reviews were written by women of color. As the report's lead author Dr. Stacy L. Smith told me, "...critics matter and we need to make sure that each film has a full score that captures the full narrative rather than the views of a slice of the population."

This year Toronto implemented a new inclusion initiative for film critics, to take a step towards addressing this discrepancy. Scouring online networks and established publications, they identified and invited 185 new journalists from underrepresented backgrounds and in some cases, financed their travel and lodging for the duration of the festival. As Cameron Bailey explains, "...all of them are from underrepresented groups, women, people of color, people with disabilities, and members of the LGBTQ community. That new addition to our existing critical core has already expanded the range of opinion you're hearing at the festival."

One of the companies that financially supported Toronto critics' inclusion initiative is Annapurna Pictures. The studio is behind Barry Jenkins' new film adaptation of James Baldwin's "If Beale Street Could Talk," which had its world premiere at Toronto. David Kaminow, the studio's head of marketing told me critics play a huge role in championing smaller films without a massive marketing budget, shaping the ways in which those films are propelled through the digital water cooler toward critical and commercial success. "The diversity of film going audiences has grown...and diversity of press is incredibly important." Kaminow says.

Monica Castillo was one of the newly accredited critics attending her first Toronto International Film Festival this year. As one of the very few Latina women critics published in major publications, she says she recognized the challenge of being taken seriously as a critic. "When Dr. Stacy L. Smith's first report came out, I cried. I finally had a number to my experience." she says.

Cate Young was also attending her first Toronto. She published an essay during the festival for Jezebel critiquing the racial politics of a new Nazi-era interracial romance called "Where Hands Touch" starring Amandla Stenberg and has several other pieces from the festival in the works. She says, as a critic based in Trinidad and Tobago, many of these films will never open in cinemas around her. "I follow a lot of critics on Twitter and I'm always outside those conversations," Young says. "I never had access to those spaces. For the first time I was on the inside in a meaningful way. It was just great to be around people who take films so seriously, which was new for me."

But culture critic Soraya Nadia McDonald of The Undefeated told me it's depressing that it takes a film festival to address what is essentially a newsroom problem - the lack of opportunities for women and minority journalists to write as arbiters of taste on art. While taste is never defined or confined by biography, it is certainly shaped by it. As McDonald says, "it shapes how you grew up. It shapes where you grow up. It shapes your education and what you learned about in school. All of those things that you take in affect how you see and consume art and the questions that are raised by it within yourself. In order to be the best arts journalist, you have to be constantly looking at and questioning your blind spots and addressing them." In an age when unpaid essays or freelance commissions remain the entry point for many journalists of color, McDonald says growing as a professional critic is a huge challenge. "Good criticism is a craft that requires labor and practice," McDonald tells me.

These conversations made me reflect on my own beginnings as a film critic, covering such masterpieces as "Beavis and Butt-head do America" for the teen section of my hometown newspaper, the Richmond Times-Dispatch. The $15 paycheck per review barely covered the price of admission and popcorn. The economics of movie reviewing never quite worked. But the more films I saw, the more I realized how rare it was to see a "good" film. I became obsessed with understanding what made movies work and why my friends were moved by the ones that did.

Many years later, I began covering the Toronto International Film Festival for All Things Considered. I was acutely aware that I was often the only person of color at press screenings, sitting in a sea of older, white and mostly male audiences with more authority and reach. Their reviews would appear immediately after each premiere, forming the leading narratives about which films did and didn't matter – informing everything from the quotes used in marketing campaigns to award-season interviews that followed.

At the same time, what kept me coming back to the festival was the revolution occurring on screen. Under the artistic leadership of Cameron Bailey, a pioneering black curator at one of the world's most important film festivals, Toronto has consistently showcased the work of minority and women filmmakers from around the world. The festival is centered in one of the world's most diverse and progressive cities, where audiences and political winds already favor the "awoken." I had the privilege of interviewing Steve McQueen about "12 Years a Slave" and wrote about the electric first screening of Barry Jenkins' "Moonlight" in the festival's IMAX theatre. I spoke with "Wild" and "Big Little Lies" producer Bruna Papandrea about the barriers facing women filmmakers before #MeToo highlighted the extent to which the industry was fundamentally broken. But the opportunity to attend festivals – and shape the fortunes of a film - remains the privilege of the gainfully employed, and the accredited.

Culture is moving toward a more inclusive future, and without an accompanying critical class to reflect on those works, there is a looming crisis for the very relevance of criticism, critic Soraya Nadia McDonald says. The triumphant success of a recent wave of films including "Girls Trip", "Crazy Rich Asians", "Coco", and "Black Panther" has finally shattered the myth that films fronted by women and characters of color can't sell tickets and impress critics.

At this year's Toronto International Film Festival, it was even easier to find exceptional filmmaking – and exceptional criticism - mining the new frontiers of art and identity. For each conventional Oscar-seeking film, there was something disruptive and subversive that challenged the norms of prestige cinema by focusing on stories by and about women and people of color. Whether it was Viola Davis' elegant rage in Steve McQueen's "Widows," the luminescent romance in Barry Jenkins' "If Beale Street Could Talk" or the class politics of Alfonso Cuarón's lyrical "Roma," this year's Toronto Film Festival was a banquet for "diverse" critics.

The reckoning that is reshaping Hollywood is finally making its way to the critic's perch. As this fall film season begins, movie screens will ignite with new stories. It's likely that 185 new critics will weigh in, leaving the insular, homogeneous consensus on what constitutes "good cinema" fading to black.