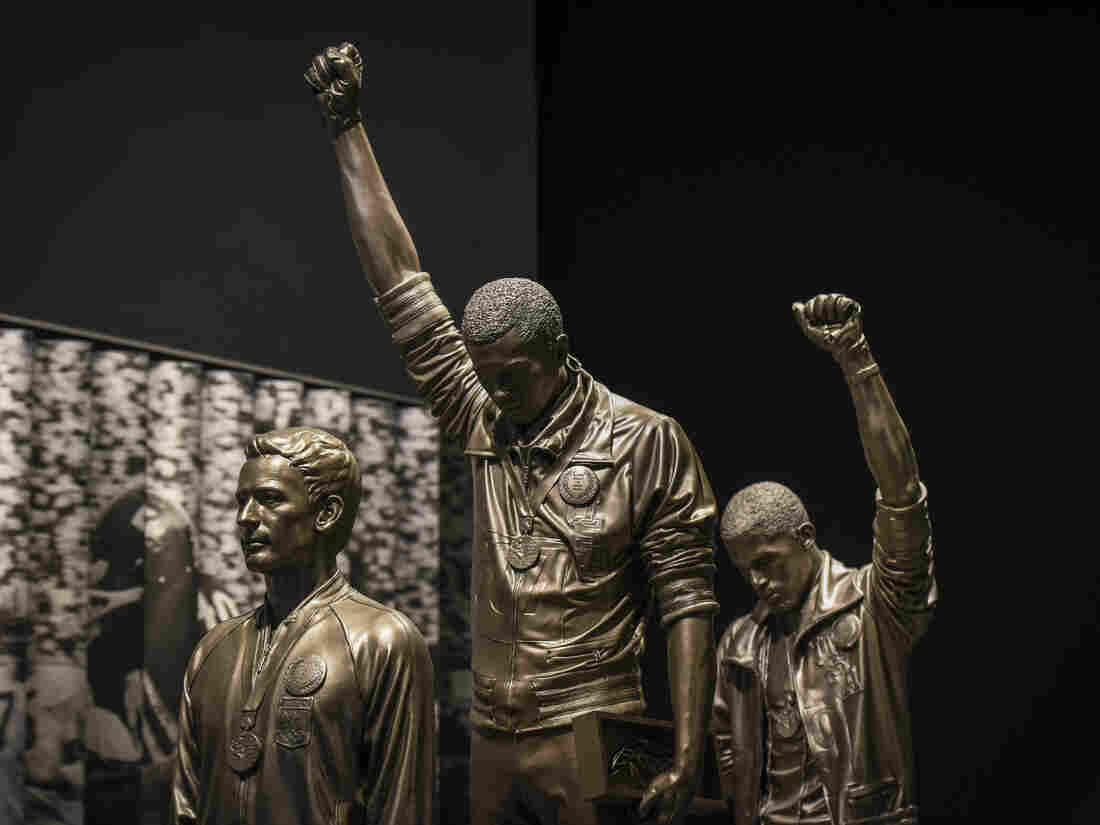 A statue depicting U.S. track and field athletes Tommie Smith (center) and John Carlos (right) as they raised gloved fists during their medal ceremony at the 1968 Summer Olympics is housed in the Sports Galleries at the Smithsonian Institute's National Museum of African American History and Culture. Jahi Chikwendiu/The Washington Post/Getty Images hide caption 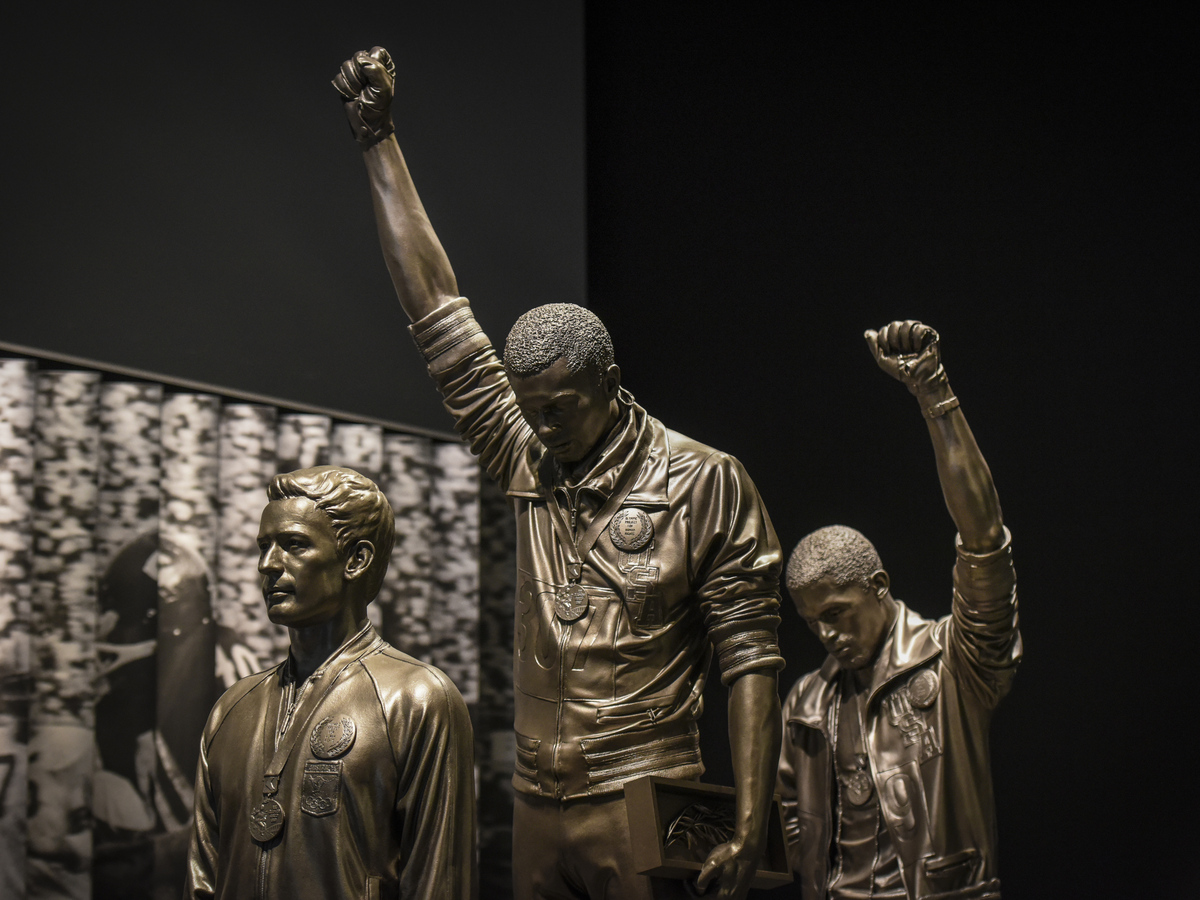 A statue depicting U.S. track and field athletes Tommie Smith (center) and John Carlos (right) as they raised gloved fists during their medal ceremony at the 1968 Summer Olympics is housed in the Sports Galleries at the Smithsonian Institute's National Museum of African American History and Culture.

John Carlos and Tommie Smith went to the 1968 Summer Olympics in Mexico City with a plan: If they won medals, they would stage a protest against racism and injustice on the world stage.

Smith and Carlos both attended San Jose State University, where black athletes had been quietly meeting to discuss whether they would even go to the Olympics.

Apartheid-era South Africa had been given permission to compete in the games, but with a threatened boycott by some of the Americans, the invitation was withdrawn and the boycott called off.

And beyond that, the Olympics were taking place amid turmoil around the nation and around the world. Two major assassinations in the United States. A student riot that paralyzed much of Paris. The Czech uprising against communist rule that became known as Prague Spring. People beaten in the streets during the Democratic National Convention in Chicago.

And in Mexico City, dozens, perhaps hundreds, of students protesting the country's authoritarian government were killed by that same government.

The games went on anyway.

Earlier that year, Carlos had been home in New York City when he got a call to come to a meeting downtown. There, he found himself face to face with Martin Luther King Jr.

King told Carlos that although the boycott had been rescinded, there were still things the athletes could do to call attention to the plight of black Americans. A nonviolent protest while all eyes were on Mexico City, King said, could cause concentric ripples, like tossing a rock in a pond.

In an oral history for the Library of Congress, Carlos recalls that King's words carried him over into Mexico City. "I wanted to do something so powerful that it would reach the ends of the earth," Carlos said, "and yet still be nonviolent." 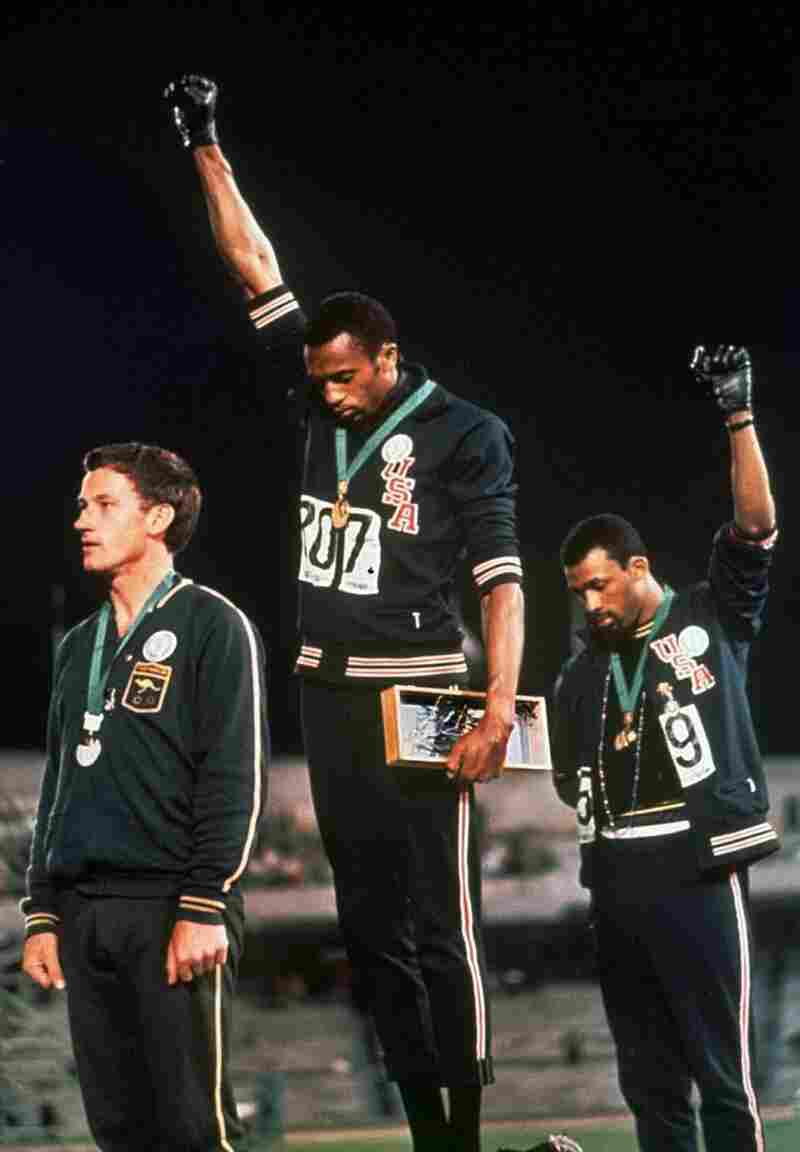 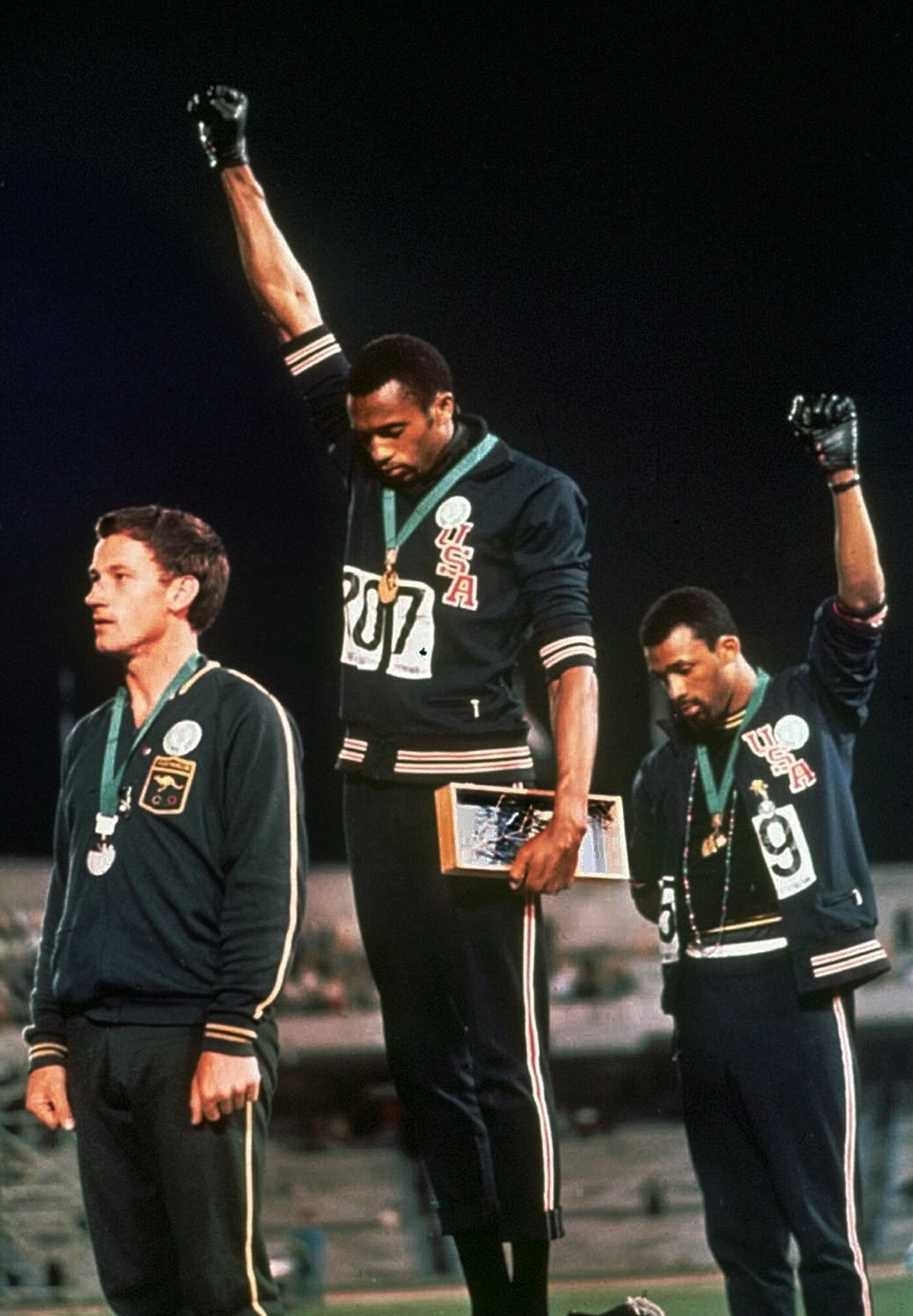 Extending gloved hands skyward in racial protest, U.S. athletes Smith and Carlos stare downward during the playing of "The Star-Spangled Banner" at the Summer Olympic Games in Mexico City on Oct. 16, 1968.

At the games, Carlos won a bronze medal for the 200-meter sprint. Smith won a gold, breaking the world record at the time for that race. (Coming into the games, Smith already held seven world records, according to the International Association of Athletic Foundations.)

As the two men walked to the Olympic podium, onlookers noticed that both were shoeless — they were carrying their sneakers — and wearing black socks and one black leather glove each. (Carlos had left his gloves back at the hotel, so they shared.) As the national anthem began to play and the flags began to rise, Smith and Carlos bowed their heads and raised their black-gloved fists into the air. People around the world stared in silent disbelief.

Peter Norman, the Australian runner who won the silver and shared the podium with Smith and Carlos, recalled the moment speaking to ABC Australia TV years later: "The raised arm and the clenched hand was a symbol of unity, with the fingers coming together, and a symbol of strength," Norman said. "I don't believe it was ever meant as a threatening gesture."

But that's exactly how it was taken by many. After a shocked silence, the stadium filled with boos. The photo of the raised-fist salute was front page on newspapers around the globe within hours. The consequences were immediate.

"Smith and Carlos were told to leave the Olympic Village and Mexico within 48 hours," the ABC Australia segment explained. "They were both stunned by the decision, but retained their composure."

The price of principle

The president of the International Olympic Committee, Avery Brundage, told the U.S. Olympic Committee's president, Douglas Roby, that if he didn't send Smith and Carlos home, the entire American track and field team would be excluded from the games. Brundage had threatened punishment for any athlete who made any kind of demonstration. Roby complied.

Both men received hate mail and death threats. There was discussion of stripping them of their medals. Many Americans shunned them for their silent gesture: For years, they struggled to find good jobs. Their marriages suffered under that strain. Their children were bullied at school. Employers shied away from them.

And Smith and Carlos were banned from future participation in any Olympics for life. (They were in their early 20s in Mexico City, and this effectively prevented them from competing in other races in Munich and Montreal.) There were no offers of the complimentary stadium tickets usually offered to medaled athletes.

(Peter Norman suffered many of the same indignities when he returned to Australia. He was ostracized, never allowed on an Australian Olympic team again, despite qualifying in several national trials. His offense: wearing an Olympic Project for Human Rights button, like Smith and Carlos, and refusing to disavow his podium mates. When he died, in 2006, Smith and Carlos flew to Australia to be pallbearers.)

But for all the detractors, many thought of Carlos and Smith as heroes, especially in black America. Their upraised fists became a symbol of black refusal to submit to racial injustice — a precursor to today's take-a-knee protests by NFL players.

The raised-fist photo has become iconic. It's now a poster that shows up in many college dorm rooms, black barber shops and fast-food restaurants.

Steven Millner, who teaches African-American studies at Smith and Carlos' alma mater, San Jose State University, was an undergrad there in 1968. He vividly remembers the two runners' reception when they came back to campus, shortly after leaving Mexico City. 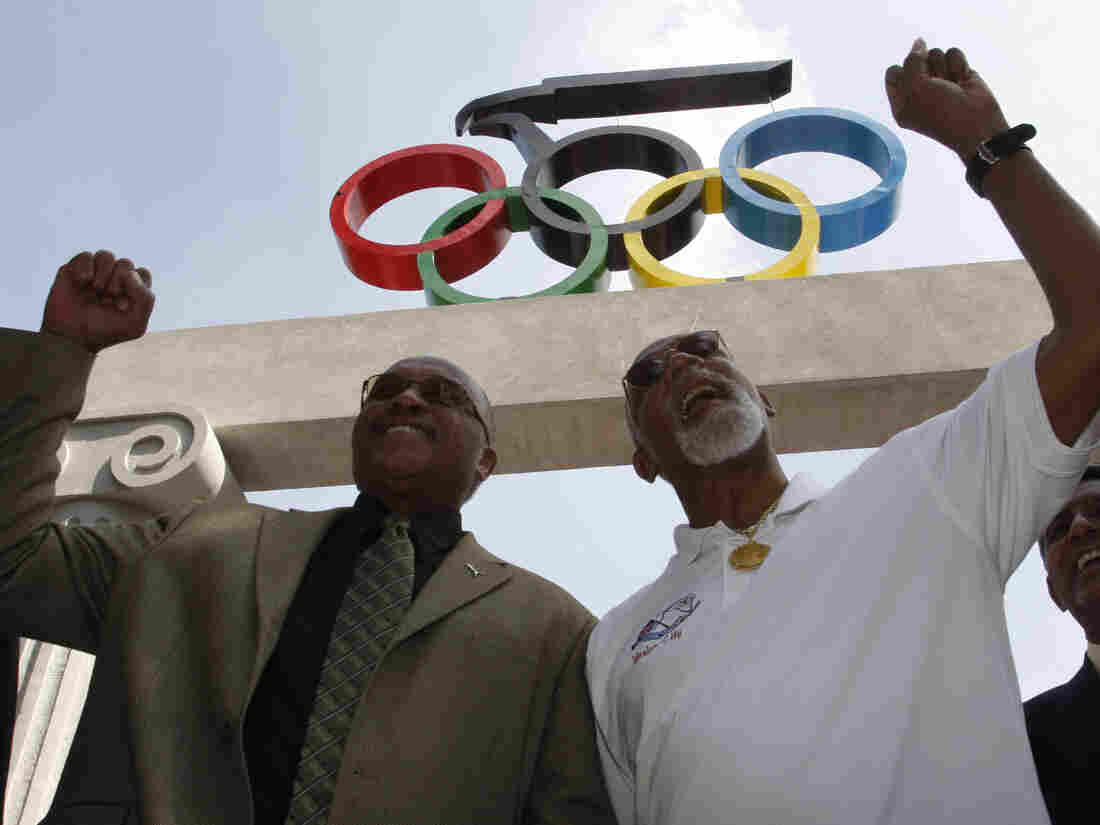 Smith (left) and Carlos hold up their fists at the Mexican Olympic Committee building in Mexico City on Oct. 15, 2008. Marco Ugarte/AP hide caption 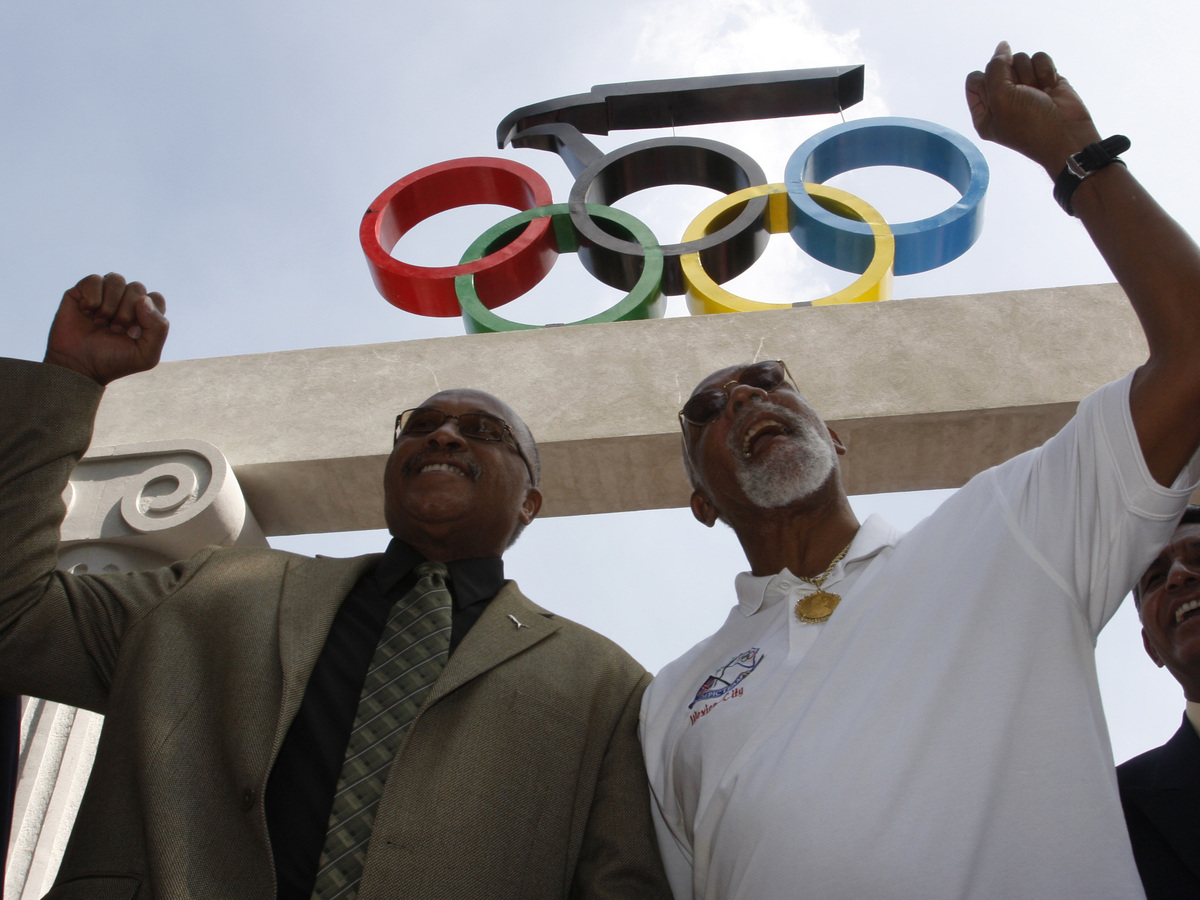 Smith (left) and Carlos hold up their fists at the Mexican Olympic Committee building in Mexico City on Oct. 15, 2008.

"Hundreds of students put their fists up as soon as they saw Tommie and John walking toward the podium," Millner recalled. "And for the rest of that decade, the raised fist just indicated the unity, the determination and the real appreciation of Smith and Carlos."

When it comes to missing Olympic Games, Carlos is philosophical. "I can live with that," he shrugged, at an event at the Los Angeles Public Library in June. He knows he has a presence even in his absence. Students who go to the Olympics send him notes: "You're sitting in your living room, but you're at the Olympic Games in Munich, and over there in Australia!' Somebody else called me and said, 'You didn't come to the games, but they got a wall, an 80-foot wall, with you on that wall.' "

In San Jose, there's a 23-foot-tall statue of Carlos and Smith. Tourists come to take pictures next to it.

Earlier this year, Smith told DW News that there is a common assumption that their raised fists stood for black power.

What was he in need of?

Smith's and Carlos' fight for justice and their insistence on dignity have come to be better understood as the years go on.

On the 40th anniversary of their famous salute, the two received one of the highest honors the sports world can bestow: They were presented with the Arthur Ashe Award for Courage, as the audience gave them a sustained standing ovation.

It was a sweet acknowledgment that what they did mattered. But as both men say, "This isn't about us. This is so much bigger than us."

In the audio of this story, as in a previous Web version, we say Tommie Smith and John Carlos were stripped of their medals. In fact, there were discussions about that possibility, but they were ultimately allowed to keep them.