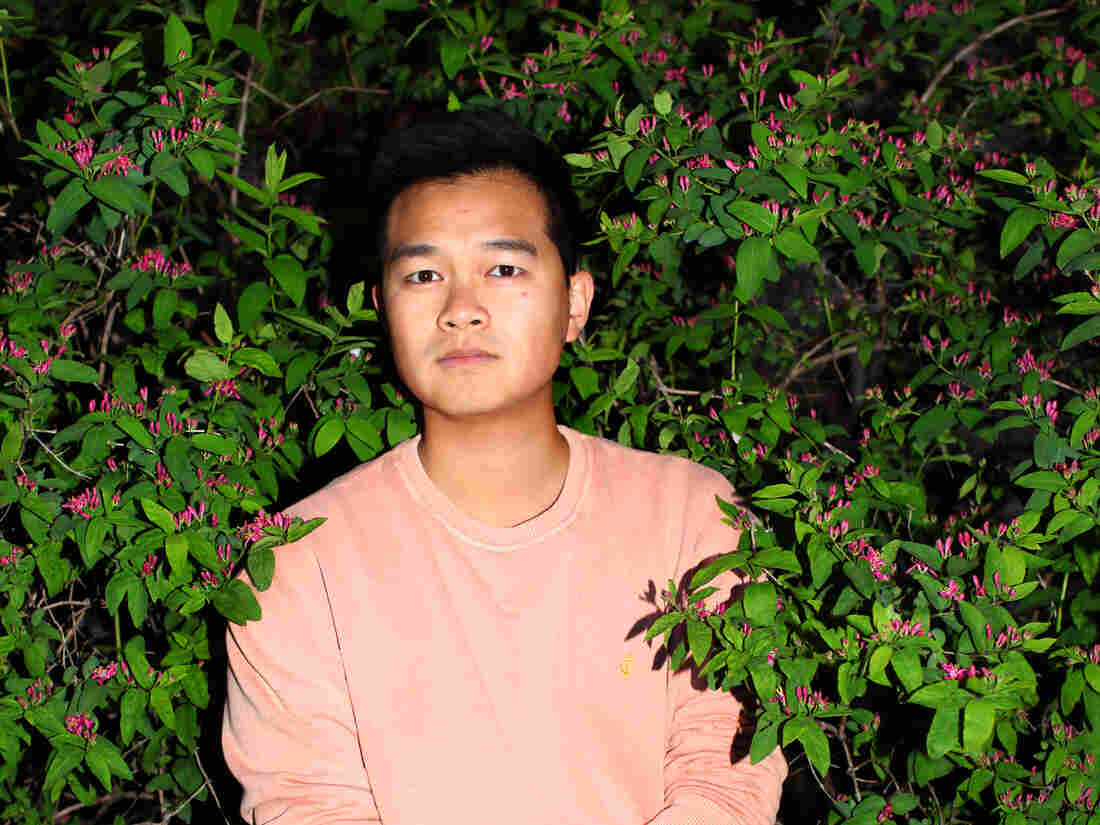 Jonny Sun emerges from behind his social character and navigates his space within the illustration world. Christopher Sun /Courtesy of Kovert Creative hide caption 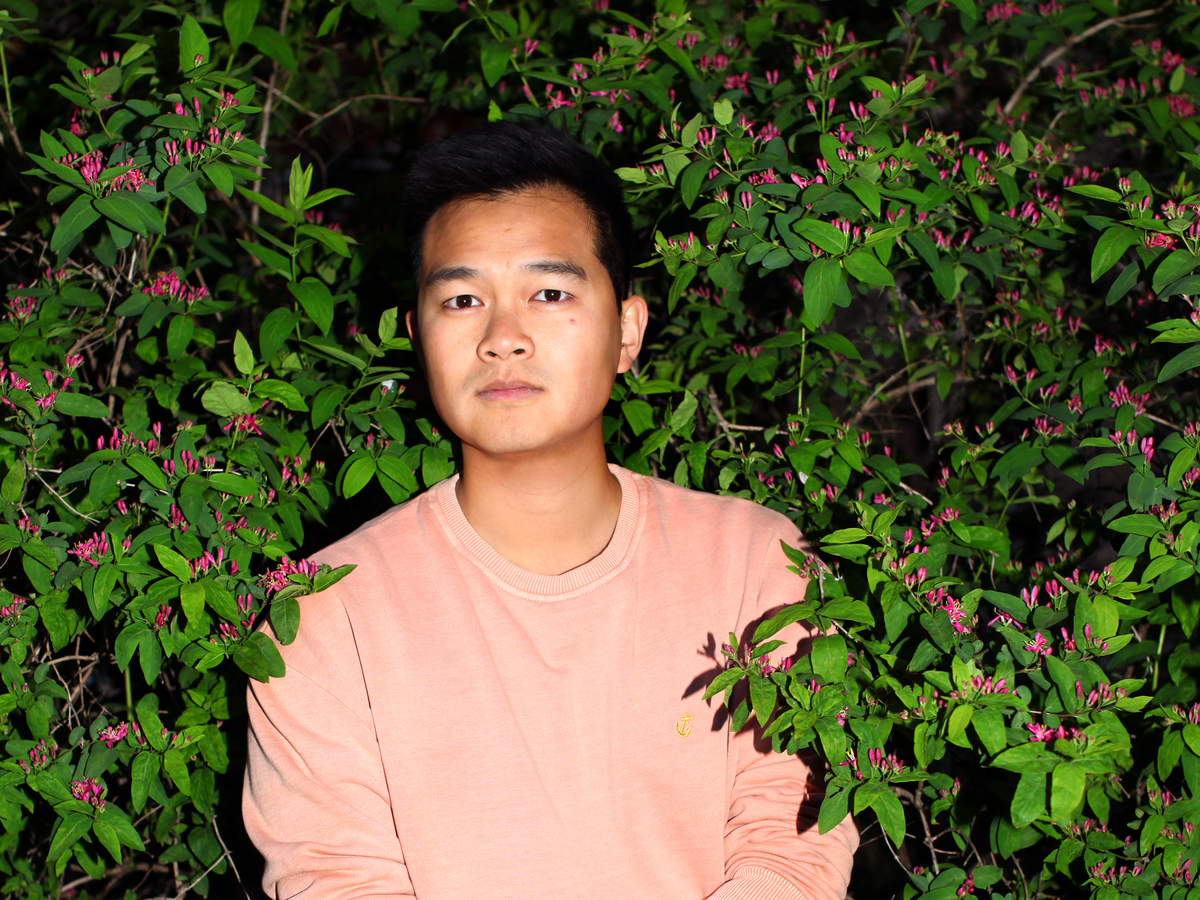 Jonny Sun emerges from behind his social character and navigates his space within the illustration world.

Jonny Sun's alien Twitter persona, Jomny Sun, has a huge following within what he calls "Weird Twitter." The bot's deliberately misspelled tweets and lonesome temperament have drawn in hundreds of thousands of followers.

That led to Sun's first book about the character, Everyone's a Aliebn When Ur a Aliebn Too.

And now, he's back — this time partnering up with Lin-Manuel Miranda on the Hamilton creator's new book Gmorning, Gnight!: Little Pep Talks for Me & You. After some initial conversations over DM and texts, Sun wound up drawing more than 100 illustrations to accompany Miranda's inspirational messages. 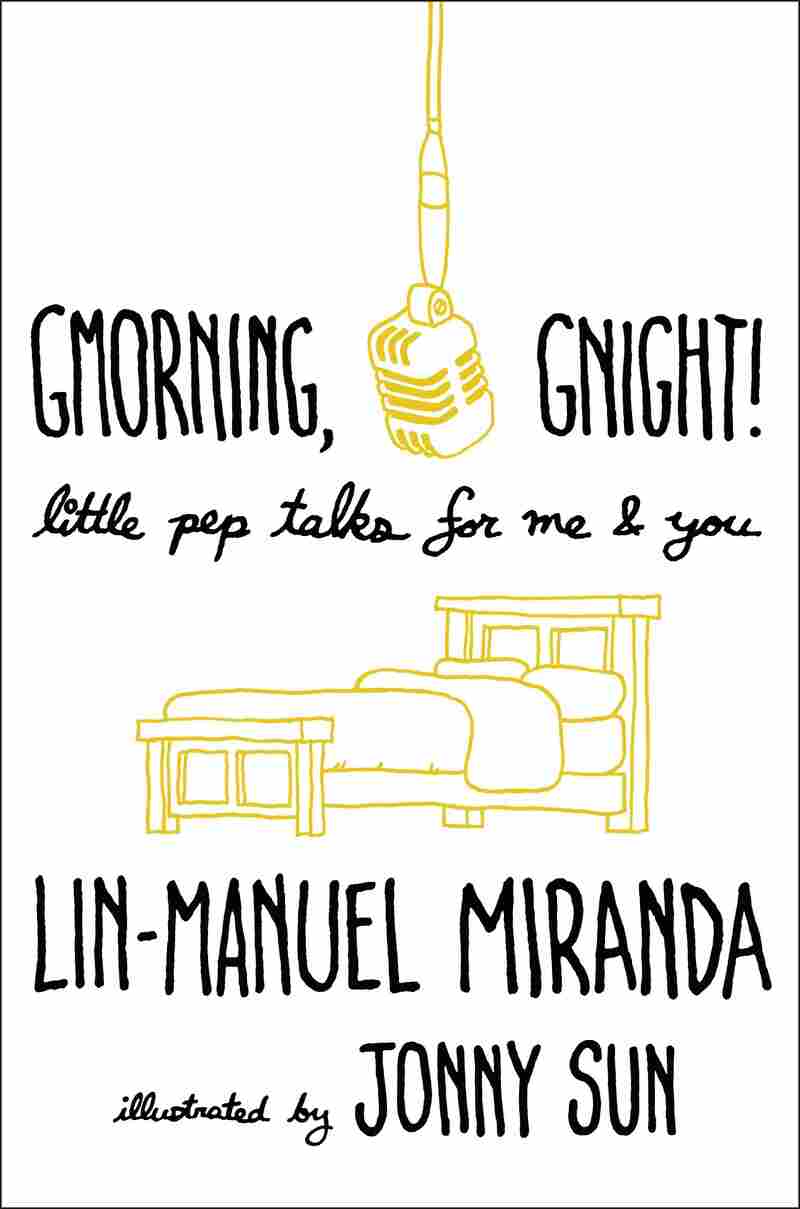 'Gmorning,Gnight!: Little Pep Talks For Me & U' is in stores now. Courtesy of Kovert Creative hide caption

Jonny Sun grew up Canada and in 2012 moved to the United States to study at Yale School of Architecture (he's now working on his Ph.D. in urban studies and planning at MIT). The transition from Canada to the U.S. left Sun longing for a sense of home and identity.

Thankfully, with the help of his alter-ego, Sun found a place in the Twitter-verse "It's just like a place that I live and I get to be part of this online big room that we're all in," he says.

For the new project with Miranda, Sun says it felt surreal turning an idea that grew out of a Twitter chat idea into something concrete. "I think the meaning of it changes and shifts when it's printed and when it's bound and when it's in this physical book to hold on to."

Looking forward, Sun is working on a three-book deal that will include a follow-up to his first book, a book of essays, and another illustrated work featuring Tiny Care Bot, a Twitter character he created that reminds people to engage in self-care.

I spoke with Sun about his latest work, racial identity in the social world, and using Twitter to address mental health. Our conversation has been edited for length and clarity.

GMorning, GNight! focuses on uplifting and inspiring communities to stay the course no matter the reality, which is something you touch on a bit through your character Jomny Sun. How much of Jomny's personality did you put in GMorning, GNight!'s illustrations?

It's funny, because I tweet with this alien avatar but I've always felt like I was tweeting as myself. So, I don't feel much of a distance between who I am as a person and what I tweet out.

I think the relationship between that and the Gmorning, Gnight! drawings is [that] I tried to approach it in a way that the images were hopeful and positive, and were things that I had found peaceful and quietly optimistic.

And then I also tried to make it very much about the imagery from [Lin-Manuel Miranda's] life, or that he talked about when we went through the manuscript together. The spirit of hopeful, positive things is what I tried to put in those drawings. 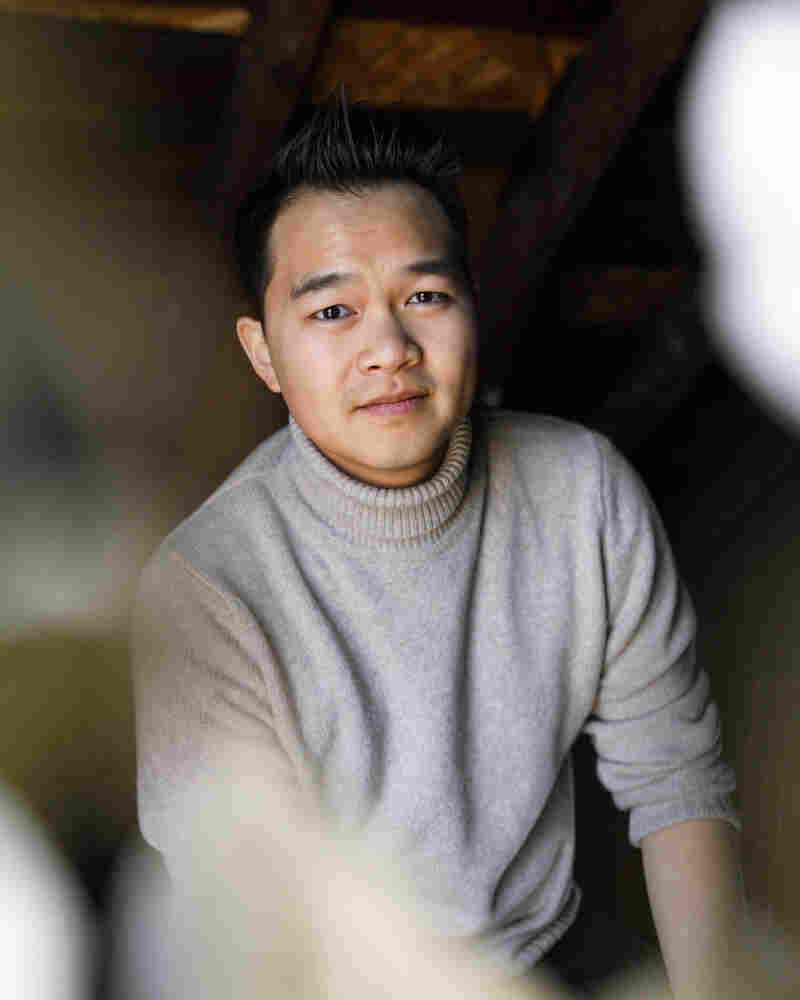 Jonny Sun is also working on his Ph.D. at Massachusetts Institute for Technology. Wesley Taylor/Courtesy of Kovert Creative hide caption

You met Lin-Manuel Miranda on Twitter. But it seems as if you and Miranda have more in common than feel-good tweets. How did your relationship develop and blossom?

I was such a long time admirer of his work. When In the Heights came out, that was one of the first musicals that I felt really spoke a musical language that made sense to me, and it felt fresh. It was cool to see a story like that in a musical form that used hip-hop to tell this type of story, and to try to blend hip-hop as a language for musicals.

Since then, I've just been following everything that he's done. It was when Hamilton started being staged that I think he found me on Twitter, and that's how we started our friendship. I'd always loved the way he used Twitter to talk about the creative process, his work and also just to keep it a positive space. I really, really appreciated that. And you could tell from him that it was so genuine and so honest and authentic.

Mental health comes up a lot in your work. Recently, there have been a number of studies looking into the disparities in mental health within communities of color. According to the National Institute of Mental Health, people of color are less likely to receive mental health treatment than whites. Out of the groups that were polled, Asians are less likely to receive treatment for mental illness than any other group. As someone who identifies as Asian-Canadian, does this ring true to you?

Yeah, I would definitely believe that it is. It's something that, when I was a kid, wasn't discussed among my family or my community. And I really came into this conversation and came to understand this discussion around mental health pretty late in my life. A lot of that was just that I never thought it was a conversation about me, and I never thought therapy and talking about mental health was something that was available to me, or accessible to me, or even something that was for me at all. I definitely relate to that statistic.

You openly discuss your struggles with depression and social anxiety, and just recently you tweeted about a panic attack. Could you talk a bit about how Twitter has affected your mental health.

I'll start with the negative, because I think that is a way into that. I think [with] social media there is potential for it to be this place that sucks you in. And particularly after the [2016 presidential] election, it was this place that I felt really glued to and felt drawn into. I think there is value to understanding that it's OK to disconnect for a little bit.

But on the positive side, Twitter was the first place that I really saw people talking about mental health, depression and anxiety and in a way that was normal and just everyday and without stigma. It was really informative, because I think before then I had never had the conversation with myself around my own mental health. I had been in school a lot and my thoughts were, "Oh if you just push through this, it's not that bad." There's a lot of that academic culture of, oh it's cool to pull all-nighters and it's a badge of honor, and you're supposed to feel miserable doing this, and I bought into that for a while.

Since I've been on Twitter, I've seen more and more people talking about their mental health and tweeting about things that were helpful for them. Over time, it made me realize more and more that maybe this is something that is deeply affecting me. It was mainly because of Twitter that I thought about seeing a therapist, because people were tweeting about therapy as well in very open, honest, normal and non-stigmatized ways. So, seeing a therapist really helped my mental health, and now I try to talk about that as much as I can. I try to tweet about therapy, my own mental health and the the day-to-day of it as much as possible, just in the hopes that I continue to pay it forward in normalizing and destigmatizing the conversation around it.

As an Asian-Canadian, what role does your racial identity play in your social media presence?

Even before I started writing jokes on Twitter, I always found that I was writing from an outsider's perspective, and writing as this outsider looking in on culture and on society. When I started tweeting and thinking about this quite literal alien character, I had always pictured it as this extension or exaggerated version of myself, who was trying to just observe and learn the best way to get through life, and try to figure out what the right ways to do things were, and what the customs were, and what was normal. And I think having this Asian-Canadian or Asian-American kind of constant outsider trait is something that influences my entire perspective and worldview.

How do you handle talking about race in a social space?

There is a responsibility attached to whatever perspective I put out there. A lot of the times I want to jump in with my instinctive reaction to different news events or things that are going on. And part of what I've decided to do is seek out people with more expertise than I have, and signal-boost what they're saying and retweet.

In terms of my own experiences and the Asian, North American experience, I really try to make sure when I tweet it's from a personal level, because I'm not a critical race theorist, an academic on race or someone who is an expert on this stuff. So, when I tweet, they are things that speak to my personal experiences and with the hope that maybe they also speak to other people's experiences.