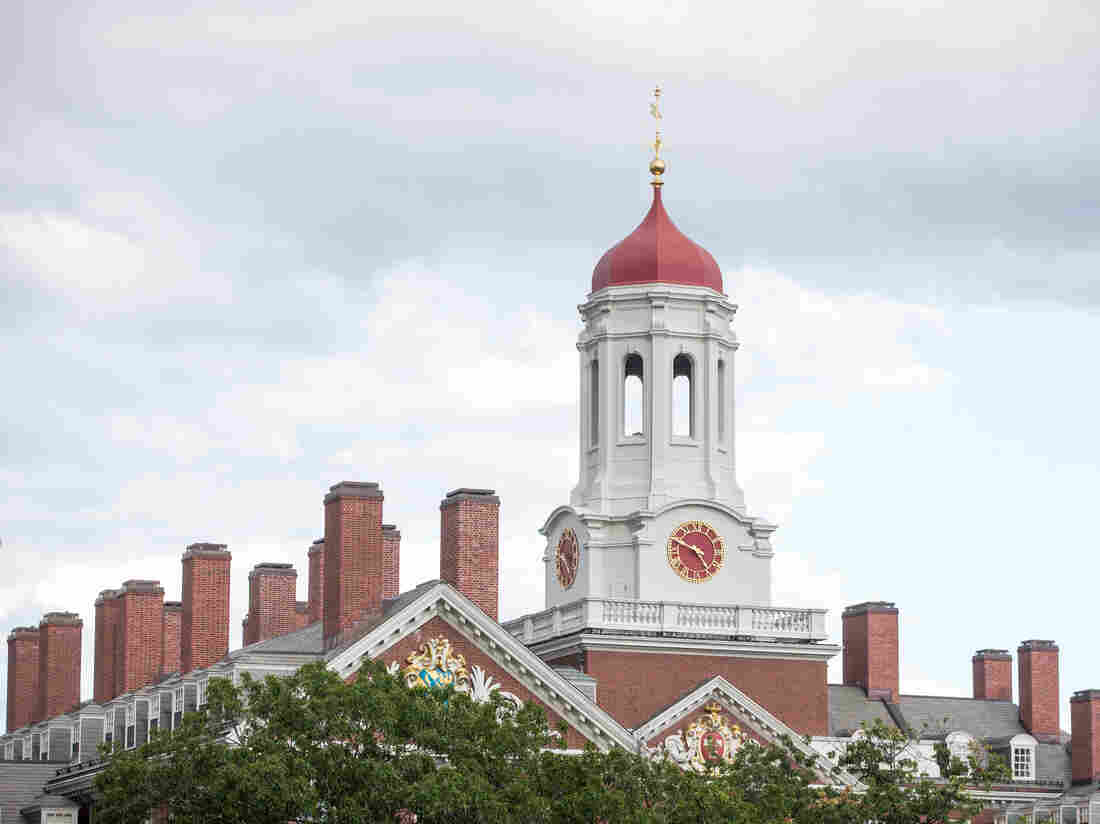 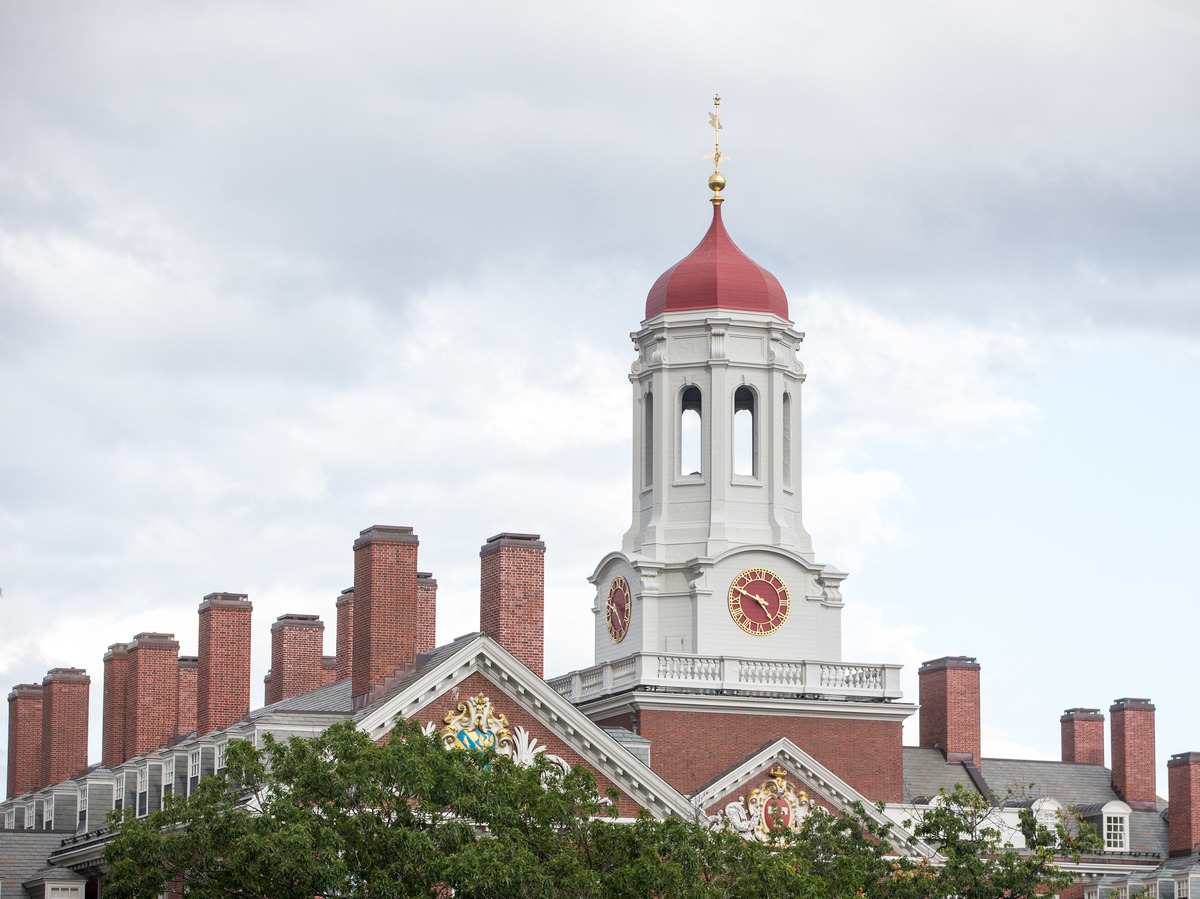 It's a rainy fall Saturday and a 17-year-old named Jerry is spending yet another morning at the GPS Academy, an education enrichment center in New York City.

"I mean, I've been pretty stressed," he says. He applied for early decision to the University of Pennsylvania, where he wants to study business.

His parents, who he says don't know much about the college application process and never went to college, have spent thousands of dollars to send Jerry to this education center in Queens for help. "They're like, 'Oh, we came from China as immigrants. We had next to nothing. We worked our asses off to get you to where you now are,' " he explains. "The most direct path to success for them is to go to a good college."

And so, as the trial in a lawsuit alleging that Harvard University discriminates against Asian-American students in admissions has ended, and a federal judge is weighing a decision, one group that's watching this case closely are Asian-American high school seniors, like Jerry.

On this Saturday, Jerry has only a few days before all the early application deadlines. (We're only using last names in this story since these students are applying to highly competitive colleges.) He's hunched over his laptop, scrolling through online forms with GPS Academy's founder, Lawrence Yan. They come across a section where Jerry can specify his race and ethnicity.

"So I just put Asian, I didn't put the specific background," Jerry says.

Yan says he instructs students at the academy to stay away from indicating specifics about race beyond "Asian-American." Both Jerry and Lawrence Yan believe that, in an already competitive college application process, indicating Jerry is Chinese-American might hurt his chances of getting in — and all because of affirmative action.

Affirmative action programs are designed to help alleviate some of the effects of discrimination. But there's the stereotype that Asian-Americans are high-achieving, and that affirmative action can harm them. Some Asian-American high school seniors who are applying to college this fall say they're constantly finding themselves in discussions about all this.

Especially in New York City, like the elite "specialized" public high school Jerry goes to. For years, the city has struggled to address diversity issues at these schools, which consistently have slim enrollment figures for black and Latinx students, and whose enrollments are predominantly white and Asian. This past summer, Mayor Bill de Blasio's proposed to increase diversity at those schools. He would do this by looking at a student's class ranking and state test scores, instead of the results of an admissions test. His proposal was met with both outrage and applause, with some parents protesting the push and one valedictorian calling for the need for diversity in his graduation speech. 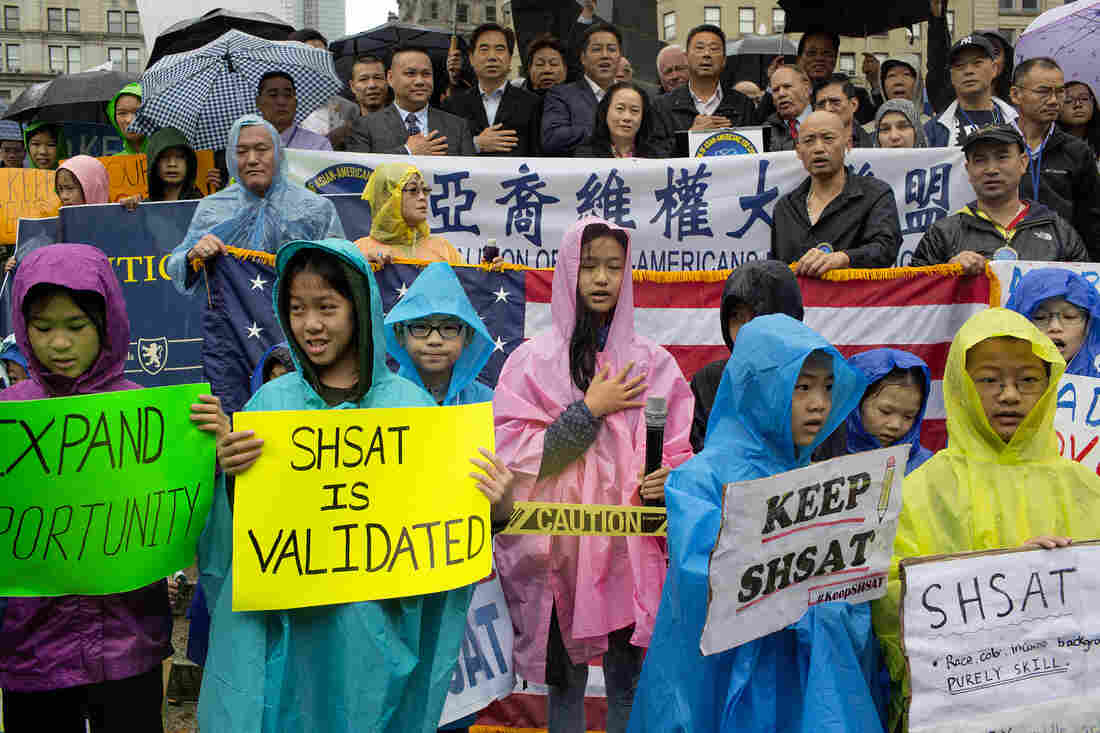 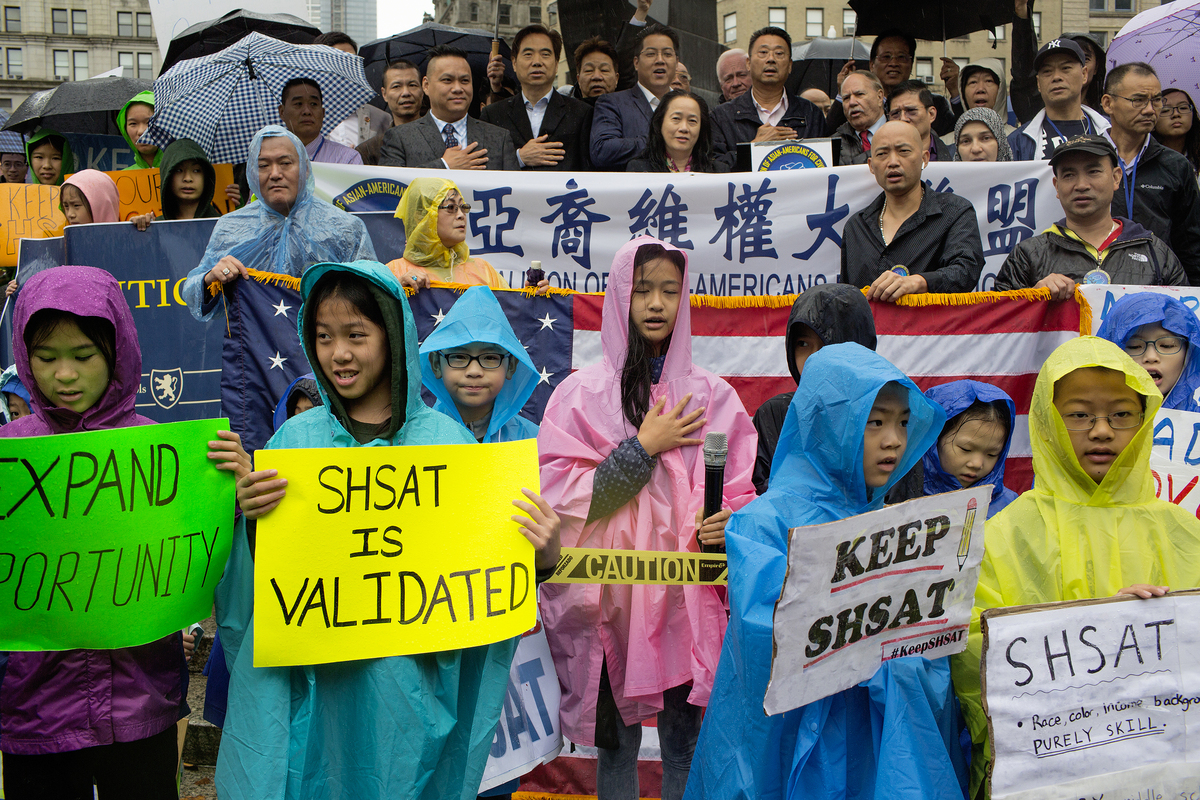 Chinese-American parents and students demonstrate in September in New York City against mayor Bill DeBlasio's plans to remove the SHSAT, a standardized test, for admission to the city's elite public high schools.

Jerry says he's against affirmative action, "because I think it's directly — I wouldn't say harming, because that's a strong word — but [it's] not to my advantage." He says he believes diversity at a school shouldn't be achieved through change to admissions practices, and that any issues related to diversity should be addressed earlier in the pipeline — by, say, giving people free access to the sort of college prep opportunities his own parents have spent thousands of dollars on.

Anne, a 17-year-old who's also at the GPS Academy, says she's on the fence about affirmative action: Diversity on college campuses is important, but she also believes that admissions should be based on merit. Her heart's set on going to Brown University, where she wants to study biology.

She thinks being Asian-American might hurt her a little bit in admissions, but she hopes her application will stand on its own.

"I feel like people with similar test scores, similar grades, but maybe a different race," might have a better chance — because colleges are trying to limit the amount of people they're accepting, Anne says. She's referring to the much-debated perception that some elite schools might be trying to limit the number of Asian-Americans. "But I feel like if I do my essays well, if I show that I'm truly passionate about Brown, then if I get in, I get in. If I don't, then I don't. That's not based on my own race, or anything, that's based on my own merits, and I think that's important." 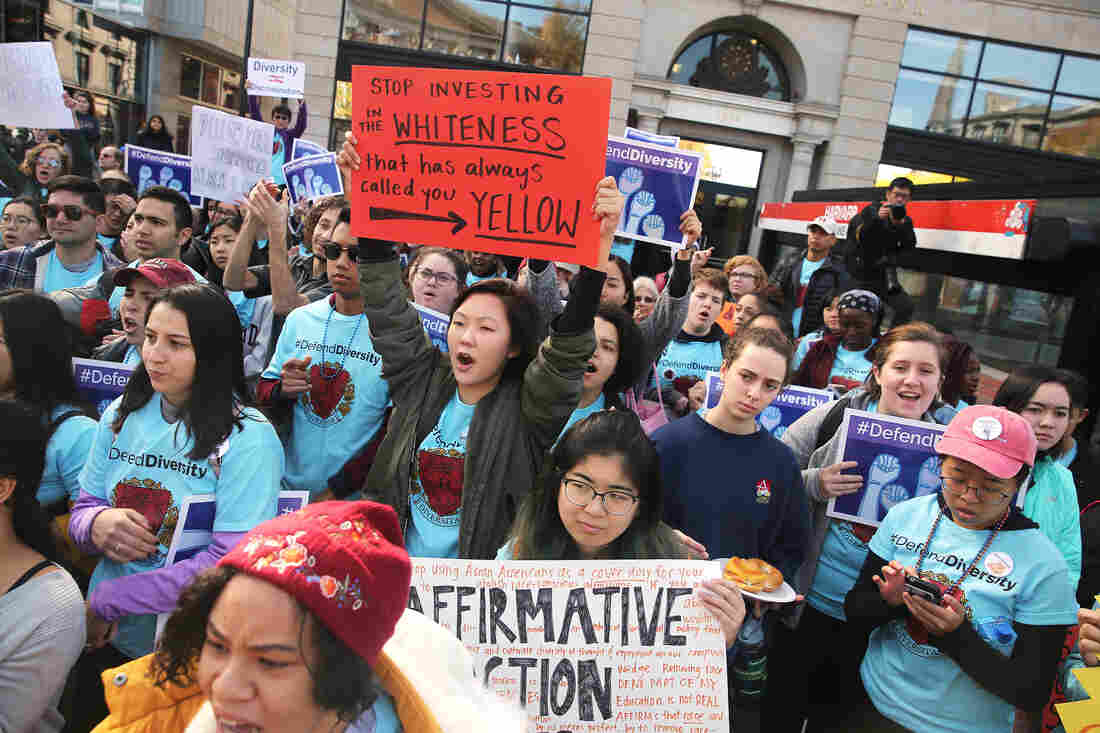 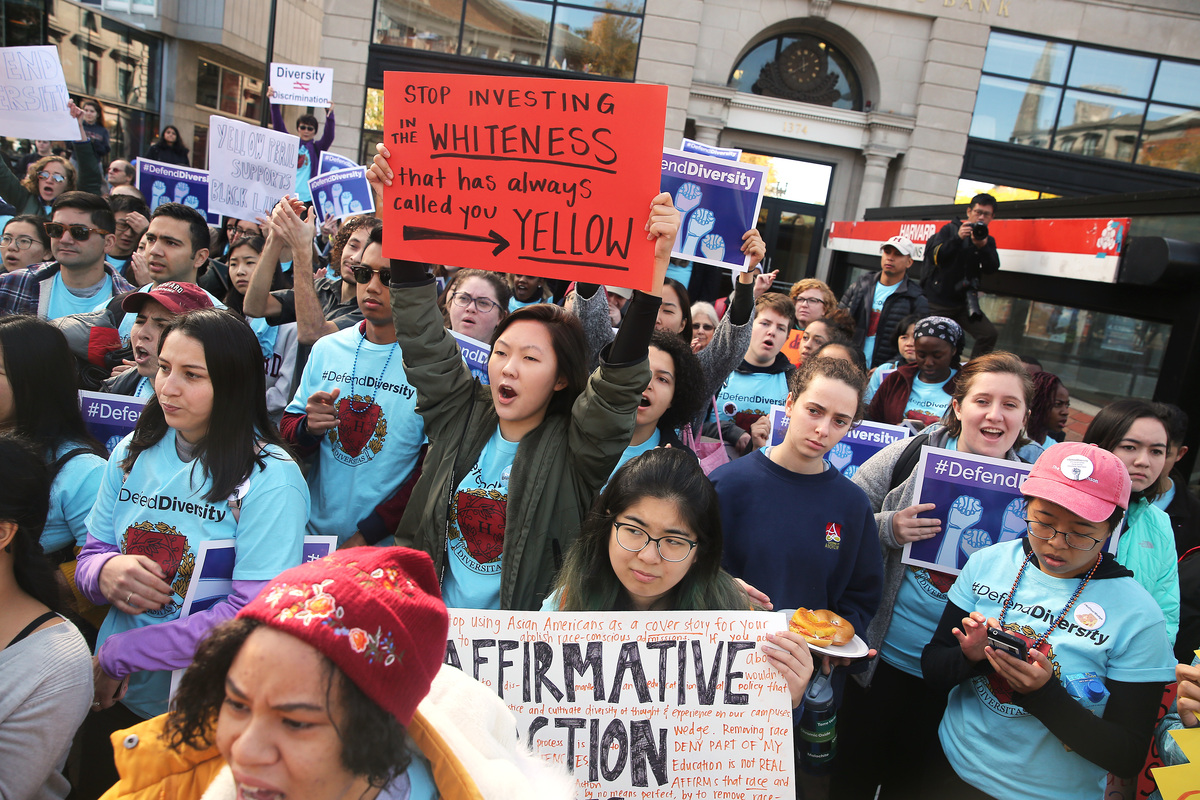 Harvard students, alumni and employees participate in a "defend diversity" rally in support of Affirmative Action in Harvard Square in Cambridge, Mass. in October.

Experts in higher education and race, like OiYan Poon, an assistant professor at Colorado State University, say that this is in part due to the activism of a relatively new and small group of Chinese-American activists. Poon says these groups have, in recent years, helped proliferate misinformation about affirmative action, including the idea of a so-called "penalty" for being Asian.

"It takes into consideration the obstacles that we do face as minorities, and gives us the opportunity to succeed," Faith says.

Across the country in Newport, Calif., a student named Tyler, agrees. He wants to study political science or sociology at George Washington University.

"I feel like it'd help someone who comes from one of the Asian-American ethnic groups that are very underrepresented," says Tyler, who identifies as queer.

Tyler, whose Korean- and Chinese-American parents met at college, says affirmative action is necessary in creating diverse and inclusive environments. He thinks that Asian-Americans have been used as "wedges" in lawsuits opposing affirmative action. But even though Tyler is surrounded by people who generally support such programs, he says he hears constantly about that so-called Asian penalty. He relays a common refrain: "There's definitely some talk about, 'Oh, as an Asian-American, a 30 on your ACT is like a white 25 or something.' "

He says he's not so sure about that: "I personally don't think it'll harm myself as much as, let's say, as much of the national rhetoric is really claiming it will."