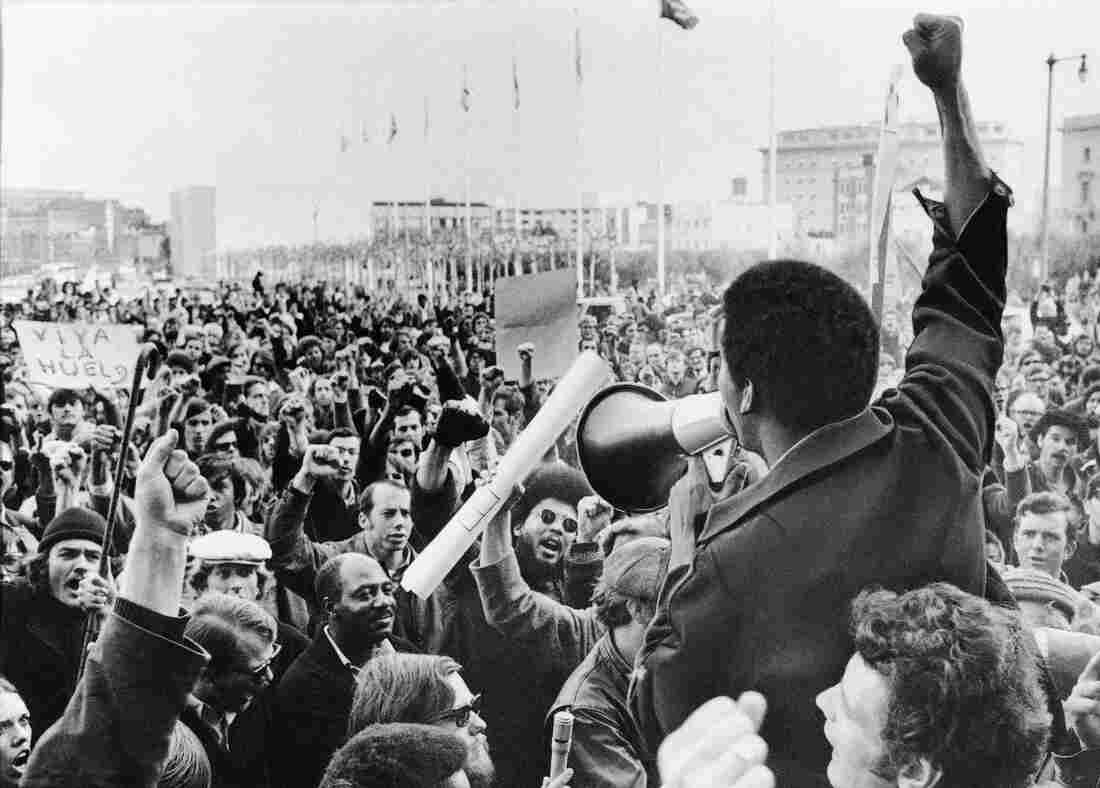 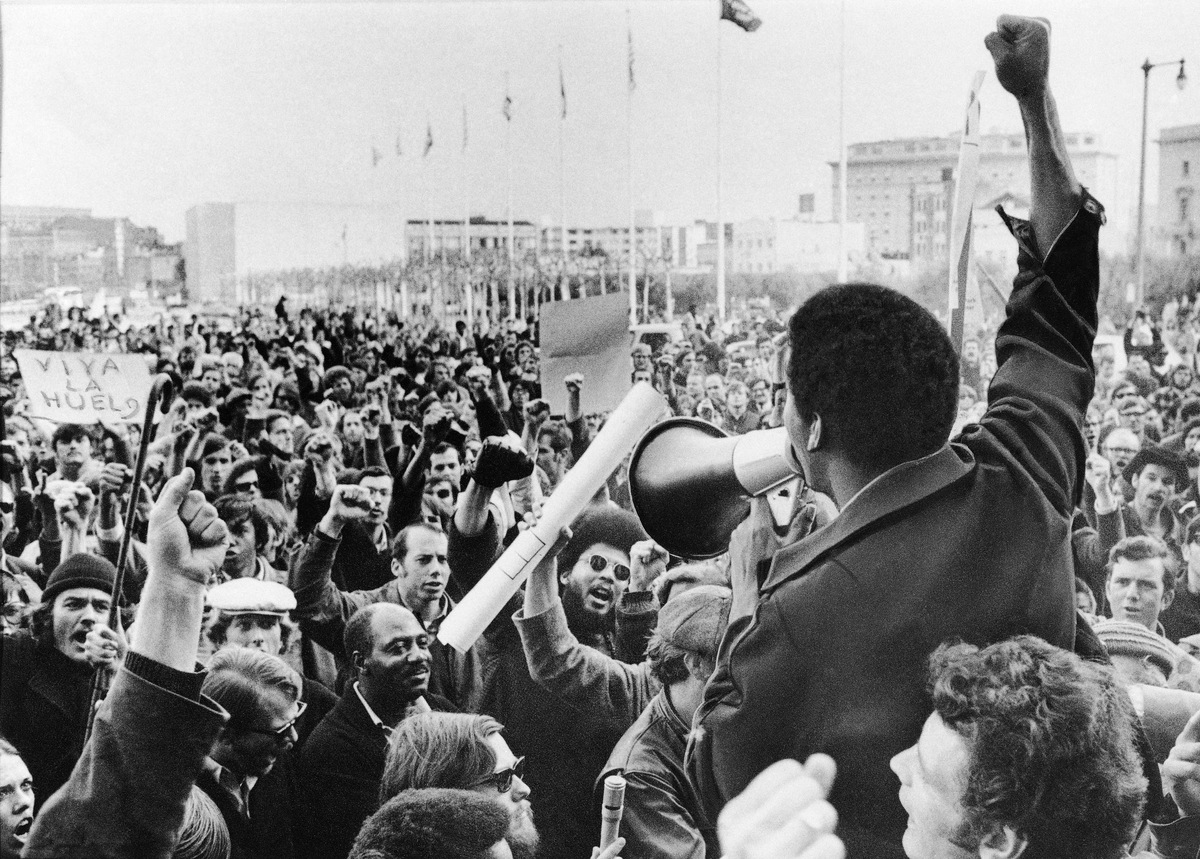 A Black Students Union leader addresses a crowd of demonstrators in December 1968.

Today, ethnic studies is an accepted part of academia. Many if not most college students have taken a course or two. But 50 years ago, studying the history and culture of any people who were not white and Western was considered radical. Then came the longest student strike in U.S. history, at San Francisco State College, which changed everything.

The groundwork was laid for the strike a couple of years before, when black students organized to press for a black studies department and the admission of more black students.

One of those organizers, Jimmy Garrett, was older and had worked in the civil rights movement in the South. He met a student named Jerry Varnado at a Negro Students' Association meeting, and the two helped assemble various black groups on campus into the very first Black Student Union.

The BSU began a two-pronged effort: to press the school to admit more black students and to persuade parents of black high-schoolers to send their kids to SF State (which is now San Francisco State University).

The administration responded with a promise to allocate a little more than 400 slots for black students one semester and a couple of hundred more the next.

When the Asian and Latinx students heard about that deal, they wanted similar treatment. But the administration told them they would need to ask the black students to share part of their allotment.

Varnado and Garrett said no. As Varnado remembers it, his view was: "We're not in a position to be giving away anything. Everybody got to carry they own weight up in here — you got to go into battle!"

The BSU leaders suggested the myriad ethnic groups join with each other and the BSU, so they could battle the administration together. 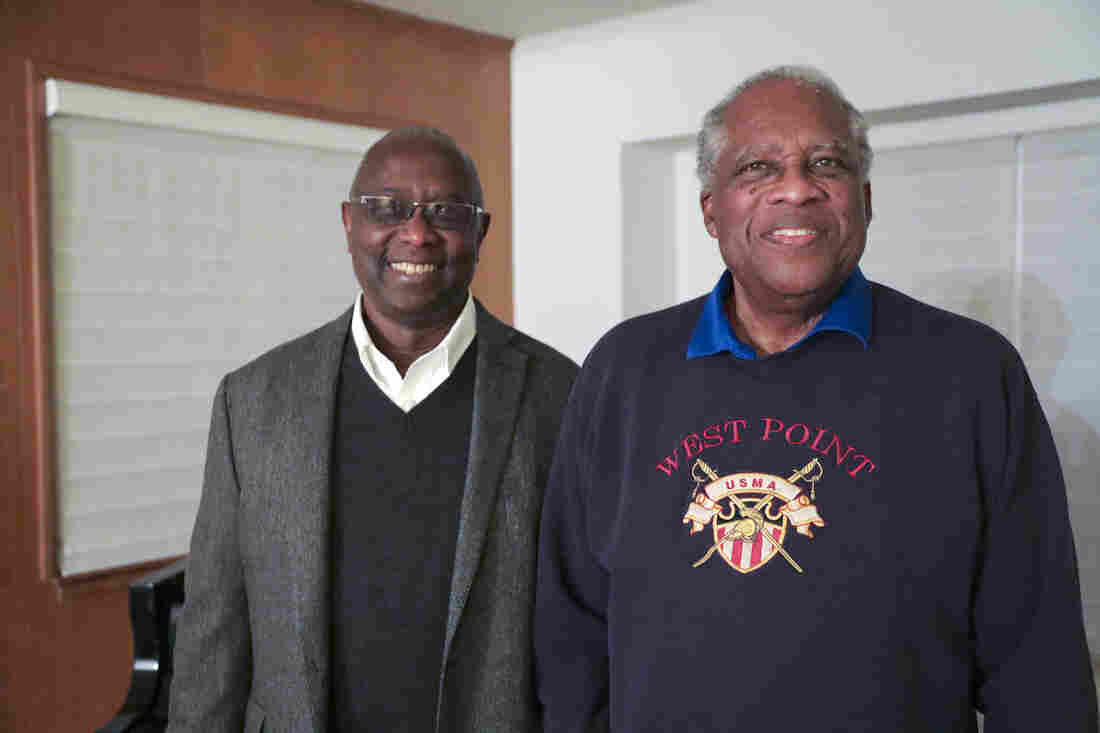 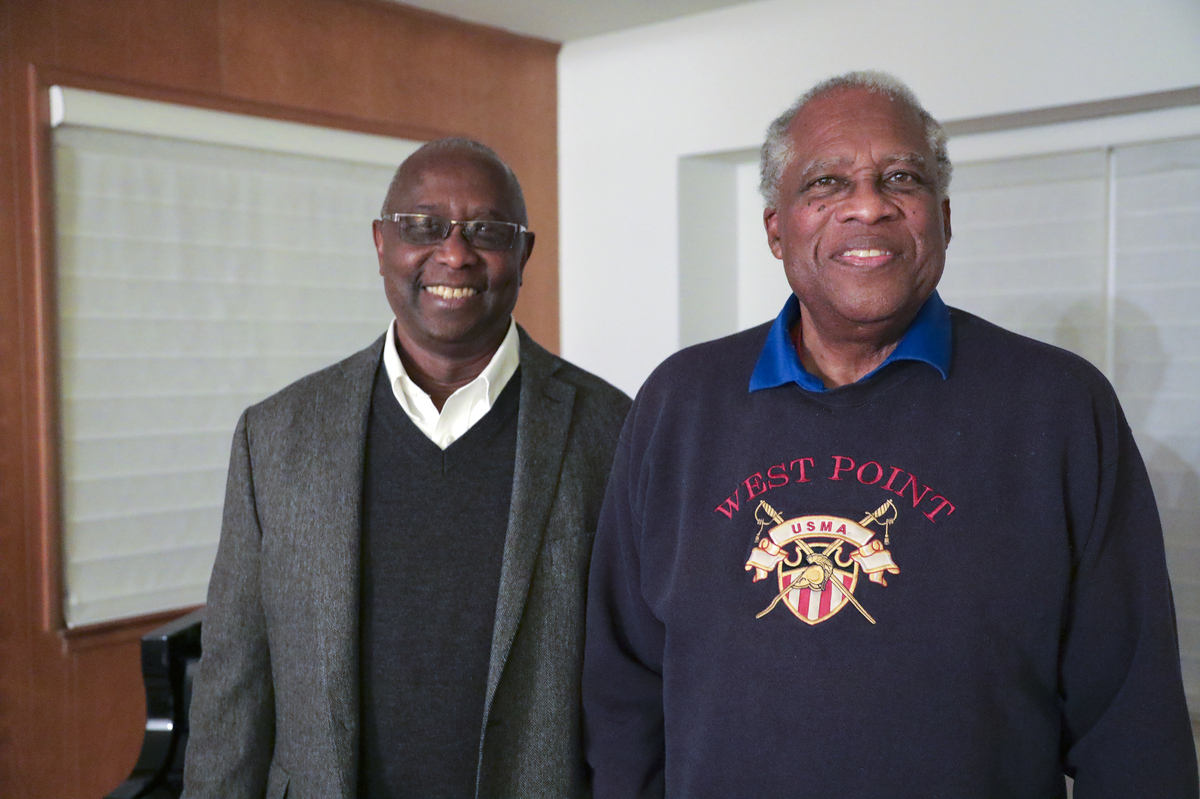 The new group called itself the Third World Liberation Front. It was "a vehicle to politicize students of color," says SFSU historian Jason Ferreira, who is writing a book on the strike. "Chicanos, Asian-Americans were dealing with the same issues the black students had been struggling with" a few years earlier.

The black consciousness the BSU members achieved began to percolate into students from other ethnicities, many of whom had conservative parents from immigrant backgrounds. For the students who were Latinx and Asian, assimilation had been the goal. "They were running around trying to be white ... looking in the mirror and wishing they looked different," Ferreira says.

At the same time, the anti-war movement had picked up steam. There were weekly demonstrations on many campuses protesting American involvement in Southeast Asia. The Black Panthers were protesting police brutality in the city's communities of color —it was a turbulent time.

One of the most prominent on-campus organizers at San Francisco State was George Murray, a popular graduate student who taught freshman English. Murray had a second job as the minister of education for the Black Panther Party. He was fiercely anti-Vietnam, and his politics got him suspended from campus in 1968. And that was it. "The strike kicked off," said Varnado.

On Nov. 6, 1968, members of the BSU and the Third World Liberation Front poured onto campus. Some 400 students gathered in front of the administration building to demand that Murray be reinstated. They stayed out of class and, every day, more students joined them.

Police were called in to contain the demonstrations and disperse the protesters. They sprayed mace and swung batons. The protests grew.

"This went on day after day," remembers Varnado, "everybody was under attack."

A few weeks after the strike began, SF State's president, Robert Smith, resigned. His replacement was S.I. Hayakawa, a jaunty, self-assured semantics professor, who would be remembered for his hard-line tactics and his signature headgear: a hand-knit, multicolored tam o'shanter.

Hayakawa had been born in Canada to Japanese parents. He became an American citizen after his family immigrated to the U.S., and in his early adult life he was a Democrat (his first vote was for Adlai Stevenson in 1956).

After the strike, he would become a Republican (and eventually, a U.S. senator).

Hayakawa became famous for climbing atop a sound truck and ripping the wires from loudspeakers the students were using to amplify their demands. He enjoyed the support of Gov. Ronald Reagan, who had waged his own battles with students at Berkeley over free speech, and the San Francisco police chief.

But accounts of students being beaten by uniformed cops started to circulate — and soon the students were joined by outraged faculty and members of some of the city's black communities. 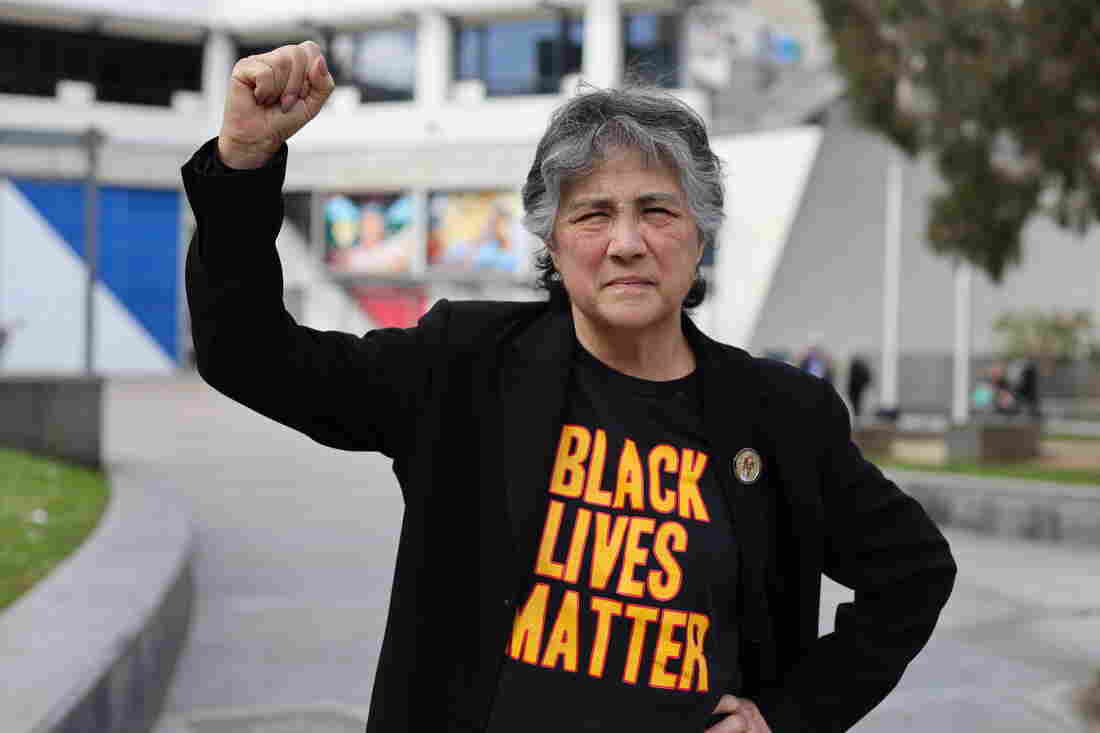 Lisa Rae Gutierrez Guzman was arrested for striking at SFSU in 1968. She took a plea deal and ended up spending her 19th birthday in jail. Shereen Marisol Meraji/NPR hide caption 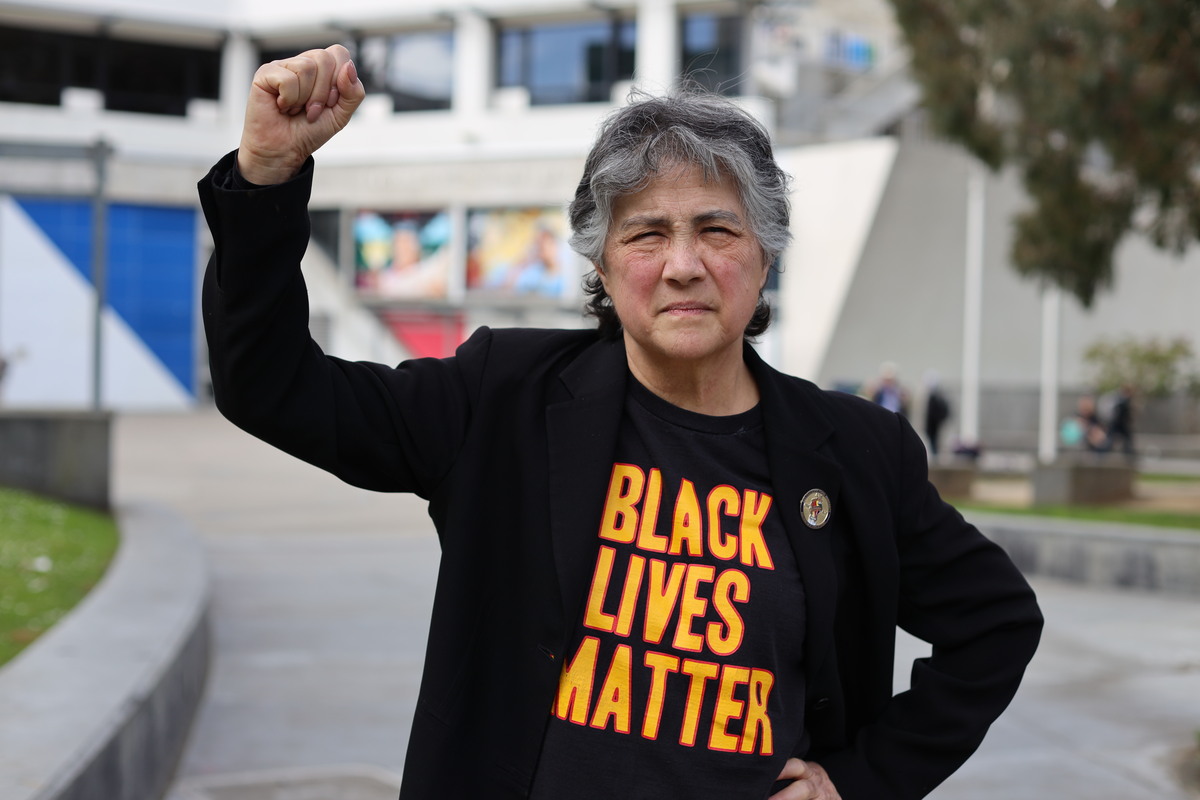 Lisa Rae Gutierrez Guzman was arrested for striking at SFSU in 1968. She took a plea deal and ended up spending her 19th birthday in jail.

Student Laureen Chew was working in the library and remembers coming outside to one of the demonstrations. "I was at the fringe of this huge [crowd], hundreds of people" when, she says, mounted police appeared.

"Some people I know were getting hit by bayonets, with their heads bashed in, blood all over the place." Chew (who went on to teach Asian-American studies at SFSU) was arrested that day, and her biggest worry: what her mother would think.

Lisa Rae Gutierrez Guzman was also arrested that same day. "My dad had to pick me up with a bail bondsman," she recalls, chuckling. She still remembers the man's slogan: "Don't perish in jail, call Barrish for bail!" Guzman was charged with three misdemeanors and says she eventually spent 30 days in jail.

"And that was really traumatic because I spent my 19th birthday in jail."

Organizer Varnado spent a year in jail, but is philosophical: "Other people spent more."

Historian Ferreira says many people have no idea of the sacrifice these activists made: "People did time. Relationships were stressed to the point of crumbling. Word would come back to members of the Third World Liberation Front and the Black Student Union from the police saying, 'We have bullets with your name on it.' "

In the end, was it worth it?

The strike ended on March 20, 1969. The administration, in response to student demands, established a College of Ethnic Studies. The administration also agreed to accept virtually all students of color for the fall semester of 1969.

And the student strikers did have lasting effects: Eventually, the SF State's creation of a College of Ethnic Studies gave rise to similar departments around the country.

Because of incorrect information provided by The Associated Press, the original caption on the photo of demonstrators said they were at San Francisco State College. The actual location is unclear.