Accessibility links
How The Hawaiian Language Nearly Died And Activists Brought It Back : Code Switch In Hawaii today, nearly everyone knows how to speak a few words and phrases of Hawaiian. But the practice of primarily speaking the Hawaiian language from birth nearly died two generations ago. 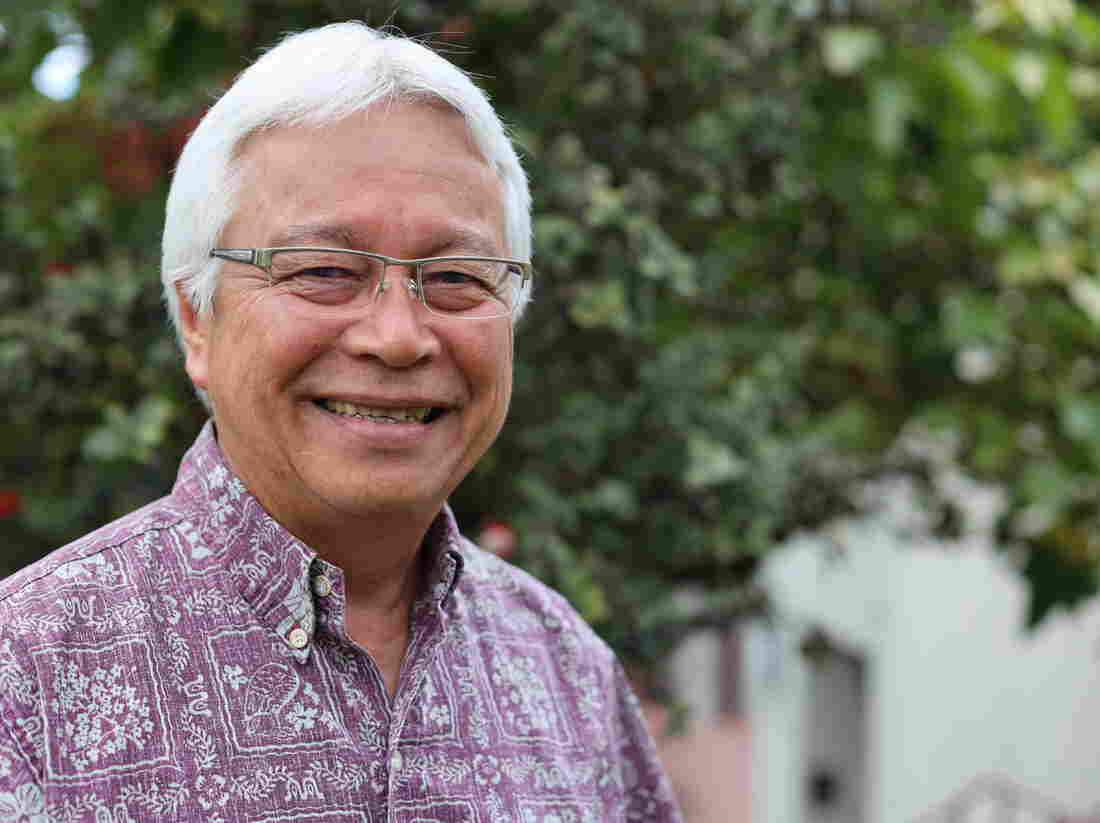 Hawaiian language activist Larry Kimura led the charge in the 1970s in getting Hawaii's Department of Education to sanction Hawaiian-language immersion schools. The state, however, did not offer any support or curriculum, Kimura said. So they did it on their own — starting with preschool — where kids could absorb the language from the start. Shereen Marisol Meraji hide caption 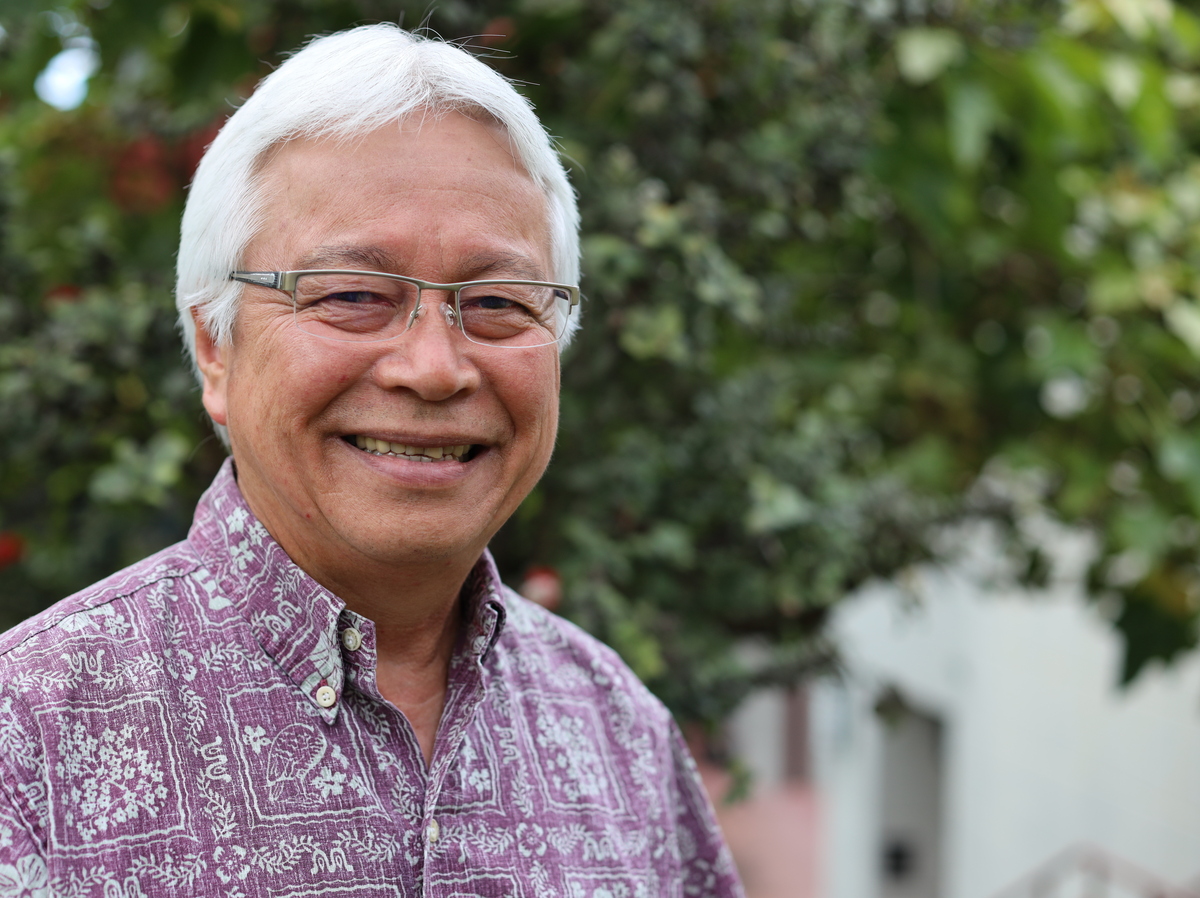 Hawaiian language activist Larry Kimura led the charge in the 1970s in getting Hawaii's Department of Education to sanction Hawaiian-language immersion schools. The state, however, did not offer any support or curriculum, Kimura said. So they did it on their own — starting with preschool — where kids could absorb the language from the start.

The voice was soft and scratchy, as if a bit timid in front of the microphone.

That voice of an elderly Hawaiian woman was that of my great-grandmother, Martha Kekauililani Kahanu Iwanaga, speaking her native language on a Honolulu radio program more than 40 years ago. The first time I heard the CD recording, it sent chills down my spine. 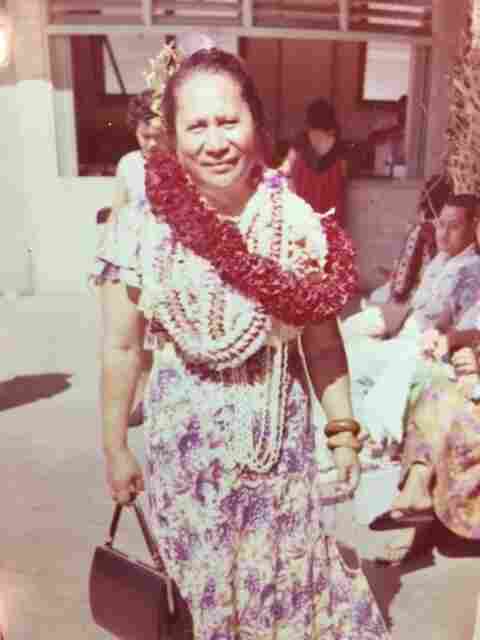 It was beautiful — musical, even, just like the strums of the ukulele that she played later on the show.

The show, it turns out, sparked a much larger movement to save a language.

In Hawaii today, nearly everyone knows how to speak at least a few words and phrases of Hawaiian. But the practice of primarily speaking the Hawaiian language from birth, as my great-grandmother and many other Hawaiians of her time did, nearly died with her generation.

A man named Larry Kimura — the voice interviewing my great-grandmother on that radio program — and some student activists set out to change that. Today, Kimura is called the grandfather of the Hawaiian language's revitalization.

In the 1970s, Kimura was a young professor, trying to teach himself Hawaiian, when he started a 90-minute radio program called Ka Leo Hawai'i. Out of a tiny studio on the ninth floor of a Waikiki office building, he began interviewing all the native language speakers he could find. He estimates there were about 2,000 of them left of this generation who grew up speaking Hawaiian in the home.

Today, he puts that population at a couple of dozen.

"This was a population of people who were in their 60s and older, who were senior citizen age — a group that I knew from my own upbringing with my own grandparents that they would not be with us for a long time," Kimura said. He conducted the interviews on KCCN Radio (a station that no longer goes by that name) because, he said, "It would be very important for them to be heard."

Hearing Hawaiians talk to each other on the radio in their own language was radical at the time. Kimura said he had to convince the station that the project was worthwhile. But once people heard his interviews on the air, they wanted to understand what their elders were saying in Hawaiian. They wanted to be part of it, he said.

The radio show sparked strong interest from many people who saw the language's status as a sign that their culture was slipping away. The Hawaiian language had been banned from school instruction in 1896, after the U.S. government illegally overthrew the Hawaiian government. From then on, in almost all public spaces, English quickly replaced Hawaiian. And by the time Kimura's show was on the air, there weren't many places to formally learn the Hawaiian language, even as a second language.

"Language is the first aspect of a people to vanish," said Kimura, who is now a faculty member at the University of Hawaii's College of Hawaiian Language on the Hilo campus.

"People don't recognize that until it's almost gone, because they're hanging onto their typical culture identification tags such as their songs, their dancing, their foods, their religion maybe, or what they wear or how they look. But language is the one that is slipping away without them noticing it. And by the time it happens, it's in very dire straits."

Keiki Kawai'ae'a, director for Ka Haka 'Ula O Ke'elikolani College of Hawaiian Language at the University of Hawaii, was also part of the movement to revitalize Hawaiian. She was one of Kimura's students, and says the push to reclaim the language was part of a broader awakening of that era, which took on new meaning for Native Hawaiians.

"The '70s is really part of that whole Hawaiian renaissance," she said. "You know, we were part of the generation where women were burning their bras, and civil rights, and people were asking, 'How come I can't speak the language of my grandparents? How come they had this and I don't have that?' "

Kimura, Kawai'ae'a and other activists decided that the solution was not just to push for Hawaiian to be included in traditional schools. To revive the language, they wanted to start with young children — preschoolers — and build schools where instruction was provided entirely in Hawaiian. Their goal was ambitious: to create an entirely new generation of Hawaiian language speakers.

They pushed, and eventually succeeded in getting Hawaii's Department of Education to allow them to create Hawaiian language "immersion schools" in the mid-1980s. And they started their first Hawaiian school called Pūnana Leo, which means "nest of voices." The state, however, did not offer any support or curriculum, Kimura said. So they did it on their own, starting with a handful of families in the first preschool, where kids could absorb the language from the start. And as those children grew older, they created a curriculum each year for a kindergarten, then first grade, and so on. Today, that effort has grown to 21 Hawaiian language "immersion" schools throughout the islands, serving 2,000 students. And now the University of Hawaii offers a bachelor's, master's and Ph.D. program in Hawaiian language. (Listen to NPR's Code Switch podcast about Kimura and NPR's visit to a Hawaiian immersion school in Hilo.)

Hawaiian is now available on language apps and online courses, enabling many people to learn it as a second language. According to a 2016 state government report, 18,000 people living in the state say they speak Hawaiian as well as English at home — a huge increase over the past several decades.

But Kimura said there's still a lot of work to be done. To him, there's a big difference between teaching the language and ensuring that it lives on. 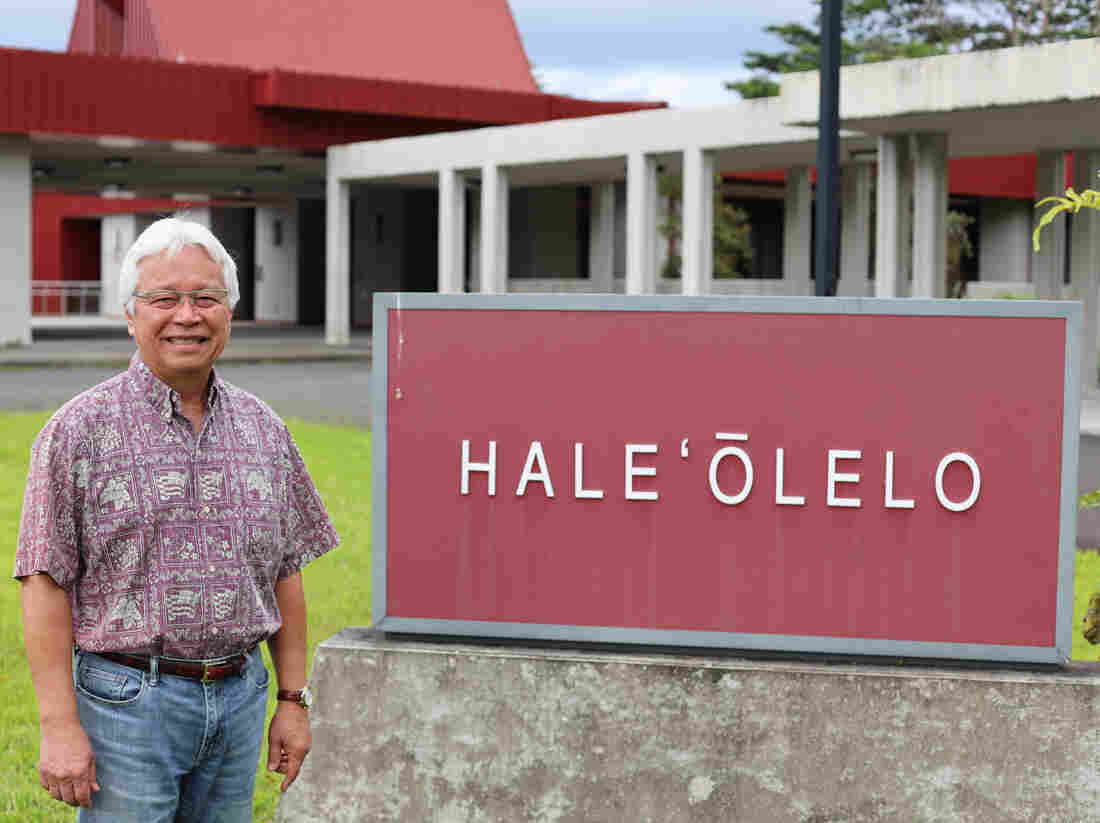 Kimura, seen standing in front of the college where he teaches, believes that the Hawaiian language is still endangered and will take a few more generations to be strong enough to survive. Shereen Marisol Meraji hide caption 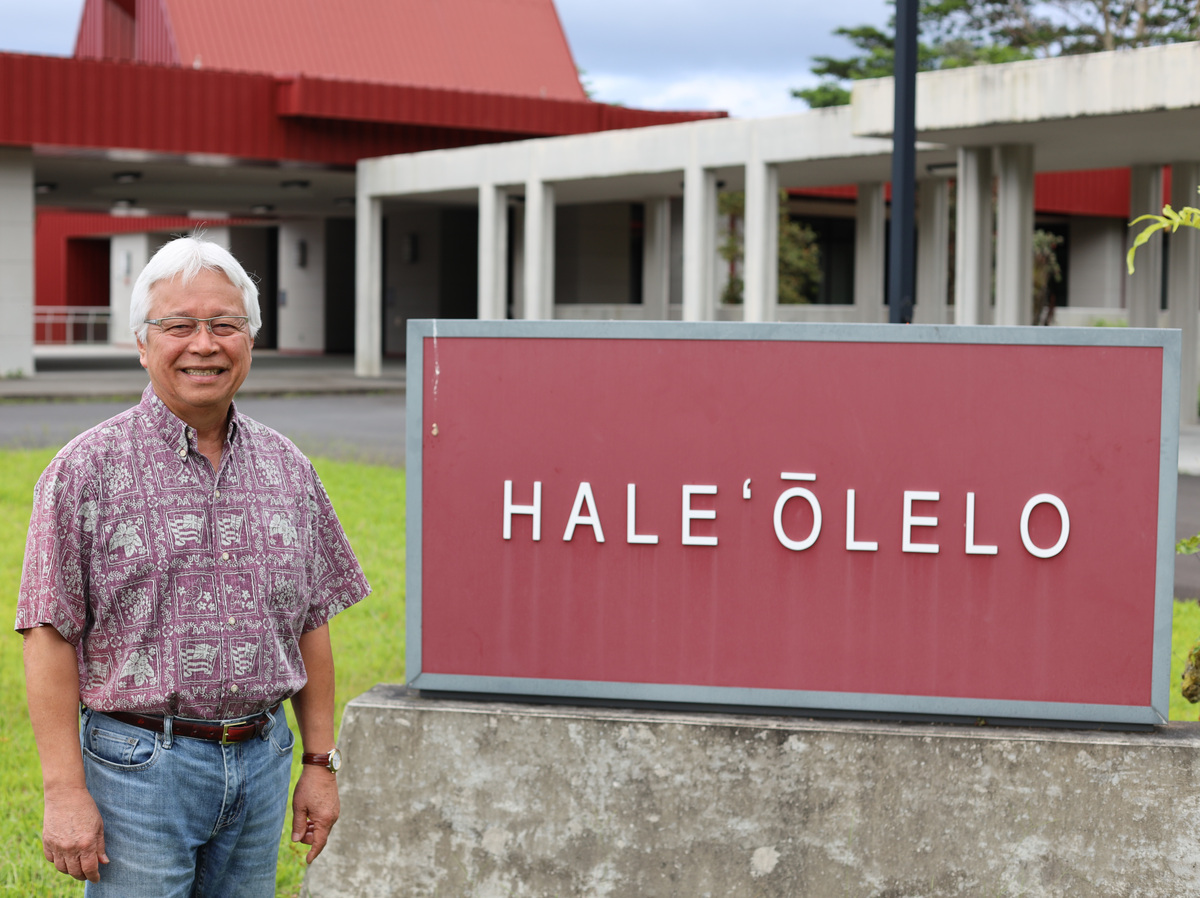 Kimura, seen standing in front of the college where he teaches, believes that the Hawaiian language is still endangered and will take a few more generations to be strong enough to survive.

He says success is not just having the schools and the educational programs, but hearing the language being spoken again from parent to child and in everyday life. His dream is to have Hawaiian become an everyday language — at McDonald's, at the gas station and the grocery store. And he realizes that will take another generation (or two or three) to keep pressing on with its commitment to learn the language and value it as an essential part of maintaining the culture.

This year, the United Nations is aiming to bring attention to the world's dying languages. About 40 percent of the world's 7,000 languages throughout the world are said to be "endangered," meaning there are so few native speakers left that the language is in danger of becoming extinct within a generation. 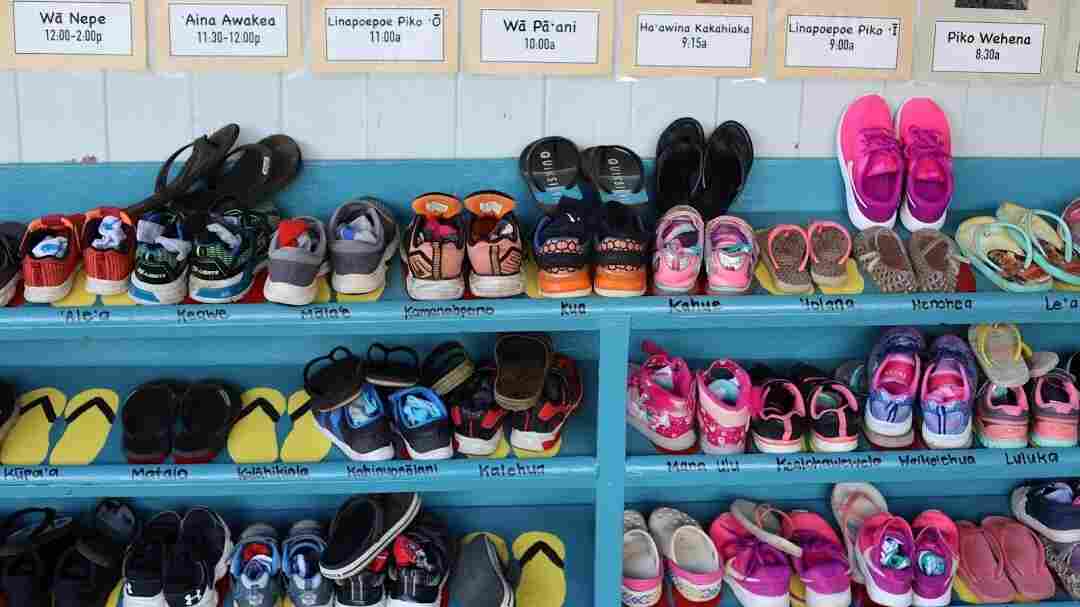 Students are required to remove their shoes before entering the classrooms at Nāwahī. Shereen Marisol Meraji hide caption 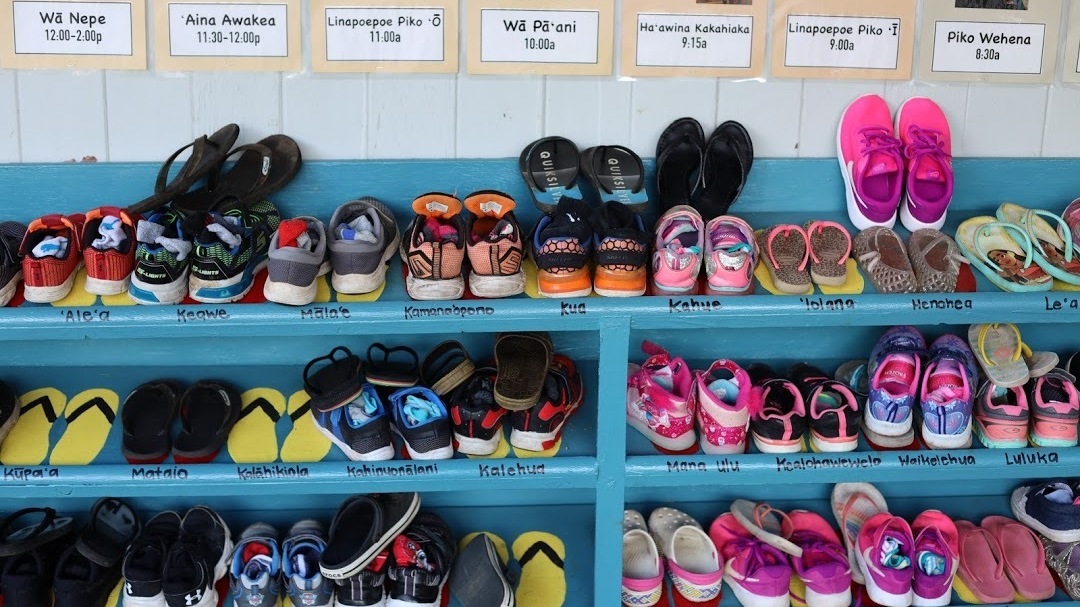 Students are required to remove their shoes before entering the classrooms at Nāwahī.

Indeed, there's another ingredient required to revive a language — and that's a commitment by a community to keep it alive by their practice.

Across the islands, many Native Hawaiians have embraced the challenge to keep the culture alive. They have enrolled their children in schools where Hawaiian is the primary spoken language. Adults have signed up for classes so they can learn, too, and speak with their children. And they are bringing it back to the home.

Pele Harman, one of the teachers at Ke Kula 'O Nawahiokalani'opu'u (Nāwahī for short — the Hawaiian immersion school in Hilo,) enrolled her children in the school so they could have an experience that she and her husband could not.

"Through being a student, it's given me a lot of blessings, being enriched in my Hawaiian language and my culture, understanding where my ancestors came from," says Kalāmanamana, Pele's daughter, who has just graduated from high school and is heading to Dartmouth College this fall. She uses a mix of Hawaiian and English when she speaks. "I know I have a responsibility to work hard for my mother and my father because they worked hard to put me and my siblings in this sort of education," she says. "And I'm very grateful for that."

As for my family, my great-grandmother did not pass along the Hawaiian language to her children — my grandmother and my father never learned to speak it. But that doesn't mean it's too late.

Last year, my kids and I joined a Hawaiian cultural group and hula school, located 6,000 miles away from Hawaii near where we live in Washington, D.C. Every week, we learn hula, Hawaiian songs and stories of old Hawaii. We learn how to express them with our hands, our footwork, our music, and through our oli, or chants.

Word by word, we are trying to teach ourselves what got dropped between the generations, and hold on.