Accessibility links
Should Journalists Call President Trump's Tweets About Congresswomen 'Racist'? : Code Switch I understand the moral outrage behind wanting to call the president's tweets racist. But I disagree. 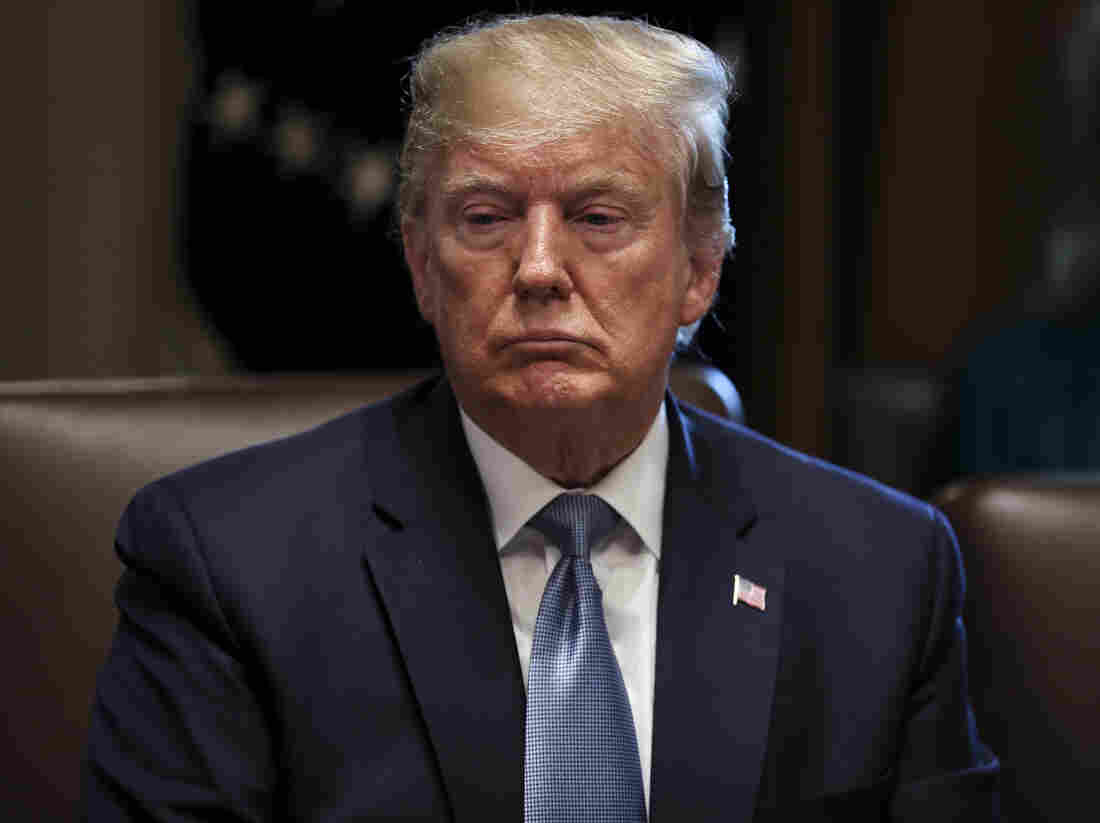 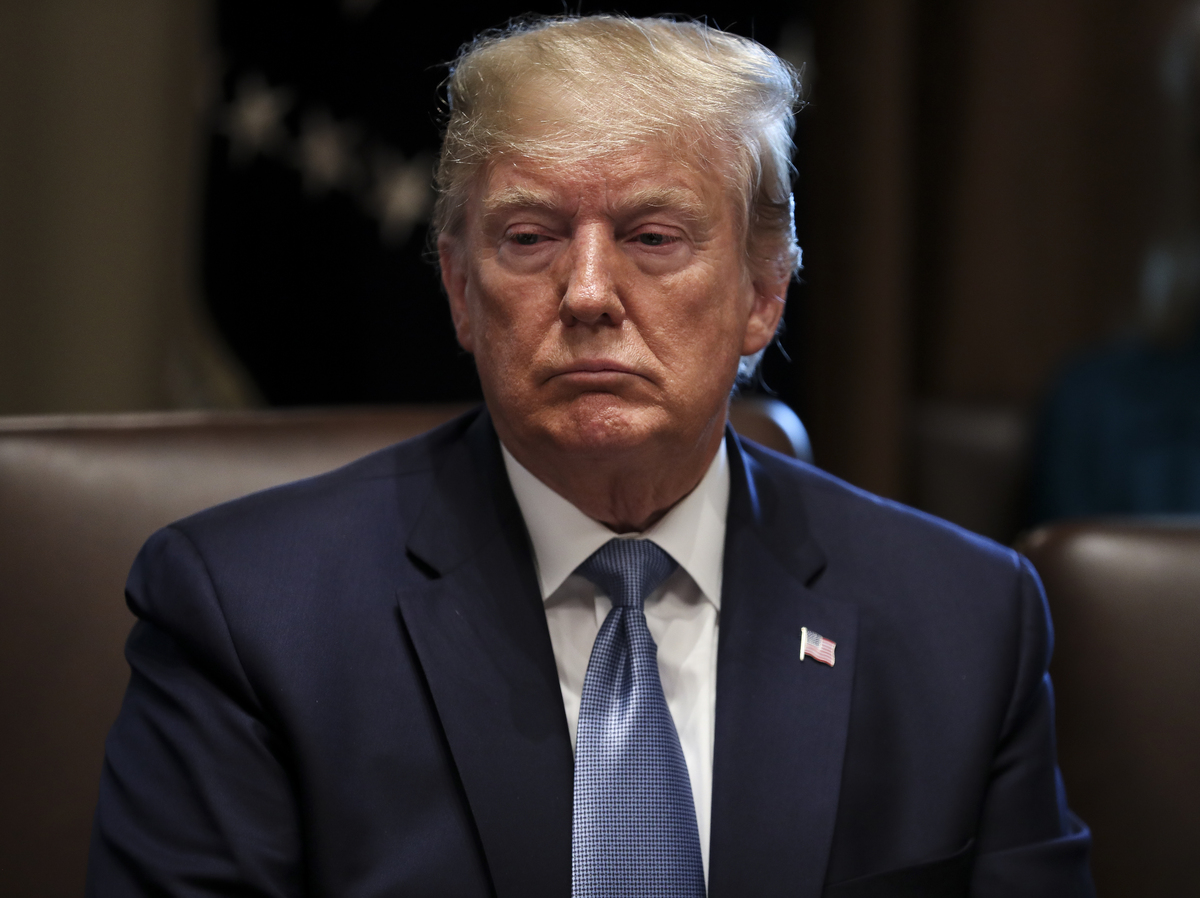 President Trump listens during a meeting in the Cabinet Room of the White House in Washington, D.C., on Tuesday.

Editor's note: NPR made the decision, this week, to call President Trump's tweets about a group of Democratic congresswomen, "racist."

On this week's Code Switch podcast we discuss why the word "racist" was used in this instance with NPR's Standards and Practices Editor, Mark Memmott.

We also invited NPR's VP of Newsroom Diversity and Training, Keith Woods, onto the podcast. He argues that it is the job of the public, not journalists, to make this type of characterization. Read his opinion piece, below. (NPR's newsroom has not changed its view on this issue and will continue referring to President Trump's tweet as racist. )

Once again, the president of the United States has used the sniper tower of Twitter to take aim at immigration, race relations and common decency. And once again, journalists are daring their profession to boldly call bigotry what it is: bigotry. Enough of the vacuous "racially charged," "racially loaded," "racially insensitive" evasions, they say. It's racist, and we should just call it that.

I understand the moral outrage behind wanting to slap this particular label on this particular president and his many incendiary utterances, but I disagree. Journalism may not have come honorably to the conclusion that dispassionate distance is a virtue. But that's the fragile line that separates the profession from the rancid, institution-debasing cesspool that is today's politics.

It is precisely because journalism is given to warm-spit phrases like "racially insensitive" and "racially charged" that we should not be in the business of moral labeling in the first place. Who decides where the line is that the president crossed? The headline writer working today who thinks it's "insensitive" or the one tomorrow who thinks it's "racist?" Were we to use my moral standards, the line for calling people and words racist in this country would have been crossed decades ago. But that's not what journalists do. We report and interview and attribute.

I am not a journalism purist. I came into the profession 40 years ago to tear down the spurious notion of objectivity used to protect a legacy of sexism, xenophobia and white supremacy. The better ideals of truth telling, accountability, fairness, etc. are what give journalism its power, while the notion of "objectivity" has been used to obscure and excuse the insidious biases we do battle with today.

I've been an informed consumer of the media since my days as a paperboy. I read the Times-Picayune as I delivered it, and the distorted view it offered of black and poor New Orleans told me all I needed to know about "objectivity." We have come miles since then as a profession. But why should I trust that we're all on the same page with our labels now? Weren't last week's tweets racist? Or last year's? Weren't some misogynistic? Vulgar? Homophobic? Sexist? The language of my judgment is generous, and they are my opinion, and they belong in the space reserved for opinions.

What's at stake is journalism's embattled claim to be the source of credible news grounded in the kind of deep, fair reporting that exposes injustice and holds powerful people to account. It may be satisfying to call the president's words, or the president himself, racist, given the attacks tweeted from his bully app and so often aimed at our profession. But at what cost?

It's already nearly impossible to separate actual journalism from the argumentative noise on the cable networks that dominate so much of public perception. There are already too many journalists dancing day and night on the line that once separated fact and judgment. When that line is finally obliterated and we sink into the cesspool beckoning us to its depths, this historically flawed, imperfect tool for revealing and routing racism will look and sound indistinguishable from the noise and become just as irrelevant.

On Sunday, the president tweeted this:

"So interesting to see 'Progressive' Democrat Congresswomen, who originally came from countries whose governments are a complete and total catastrophe, the worst, most corrupt and inept anywhere in the world (if they even have a functioning government at all), now loudly and viciously telling the people of the United States, the greatest and most powerful Nation on earth, how our government is to be run. Why don't they go back and help fix the totally broken and crime infested places from which they came."

His words mirror those of avowed racists and xenophobes that date back to the birth of this country. Was that moral judgment, my last sentence? I would argue no. I'd call it context, and it doesn't require my opinion, just a basic understanding of history. That's an alternative to labels: Report. Quote people. Cite sources. Add context. Leave the moral labeling to the people affected; to the opinion writers, the editorial writers, the preachers and philosophers; and to the public we serve.

We just have to do journalism.

For more on this, check out our latest podcast episode, where Keith Woods and NPR's Standards and Practices editor discuss why they disagree on what language to use.