Accessibility links
White Supremacy Has Never Been Fringe : Code Switch Just as it did at the end of the 19th century — an era of racist lynchings and massacres — the idea that a less-white populace poses a danger to the United States continues to enjoy wide purchase.

White Supremacy Has Never Been Fringe

White Supremacy Has Never Been Fringe 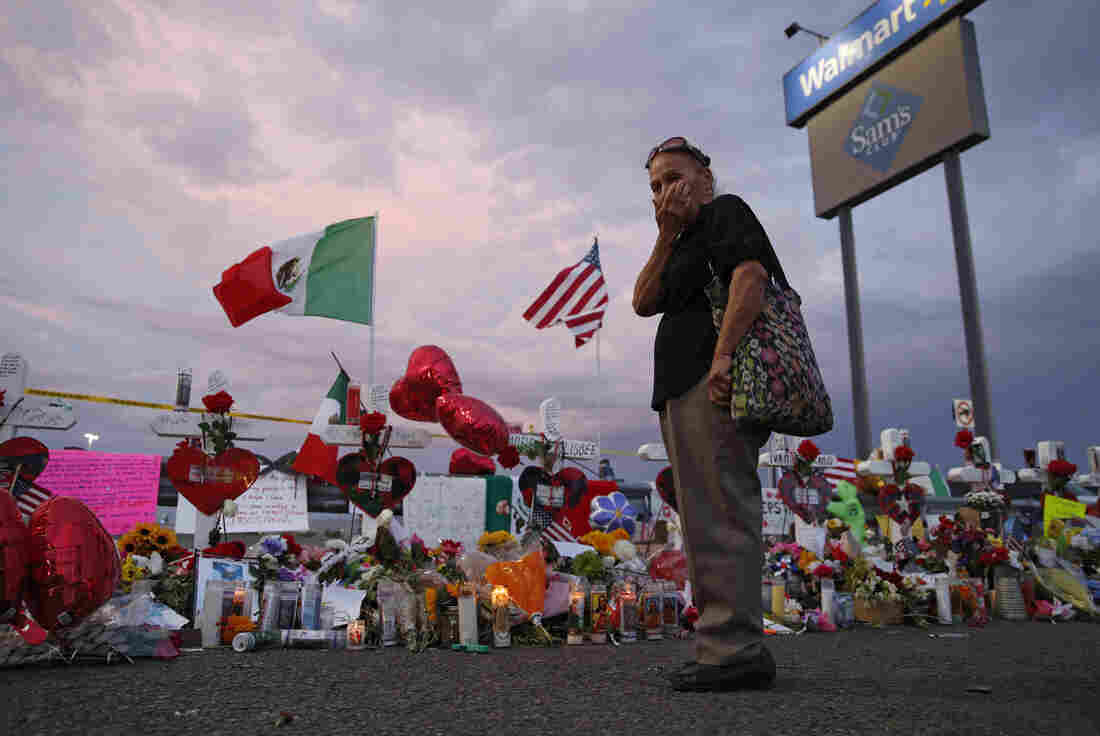 Catalina Saenz wipes tears from her face as she visits a makeshift memorial near the scene of a mass shooting at a shopping complex in El Paso, Texas. A list of the people who died in the weekend shooting rampage at the Walmart, shows that most of the victims had Latino surnames and included one German national. John Locher/AP hide caption 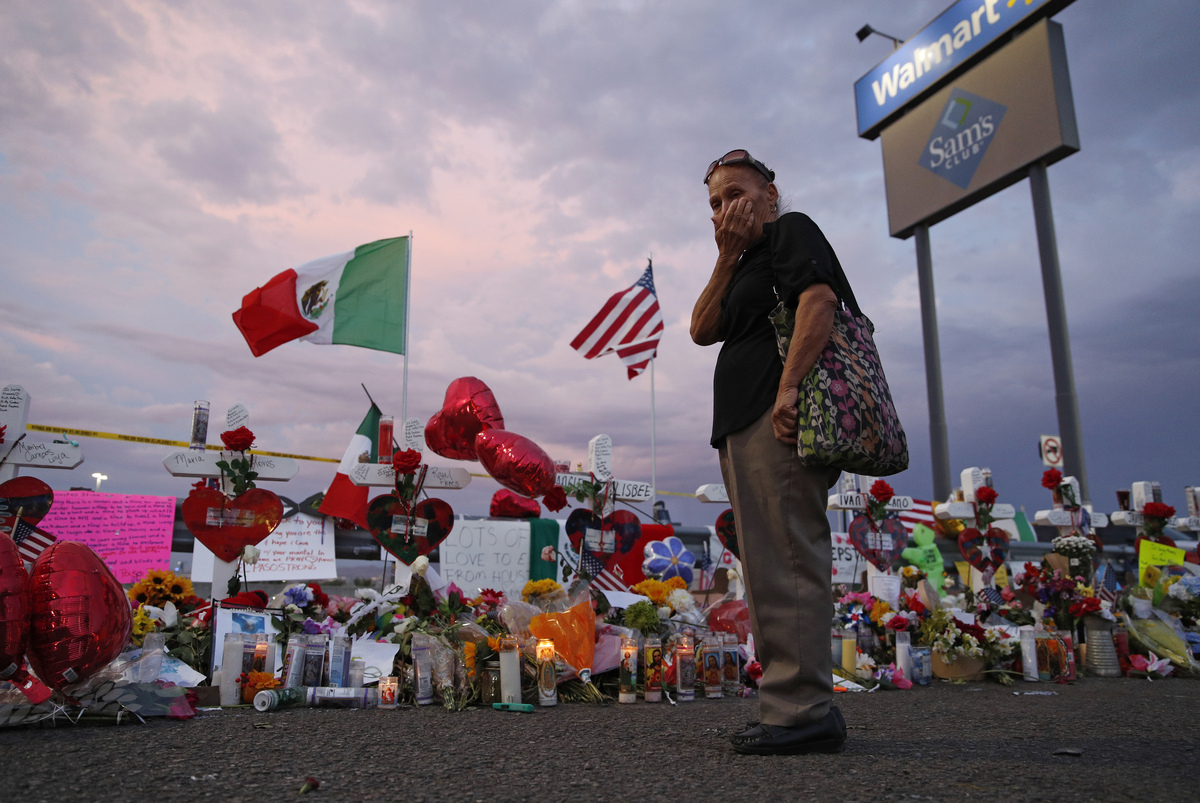 Catalina Saenz wipes tears from her face as she visits a makeshift memorial near the scene of a mass shooting at a shopping complex in El Paso, Texas. A list of the people who died in the weekend shooting rampage at the Walmart, shows that most of the victims had Latino surnames and included one German national.

In September of 1885, a mob of about 150 white men, armed with rifles, descended upon the Chinatown in Rock Springs, Wyo. They issued an ultimatum to the people who lived there: you have an hour to leave town.

The assembled horde was angry at Chinese laborers in the region, who they blamed for keeping the choicest mining areas and depressing their wages. They felt that the Chinese were working the choicest areas of the coal mines, the part that would yield the most coal and thus the most compensation. The Chinese, they felt, were taking what was rightfully theirs.

The ultimatum was a formality: the mob had surrounded the neighborhood to make sure there was no easy way to escape, and they didn't even wait the full hour. The mob rushed in, shooting wildly — the beginning of what would become a full-on pogrom.

Some of the Chinese survivors would later issue an account of what happened to the Chinese consul in New York City:

"Some of the rioters, when they could not stop a Chinese, would shoot him dead on the spot, and then search and rob him. Some would-overtake a Chinese, throw him down and search and rob him before they would let him go. Some of the rioters would not fire their weapons, but would only use the butt ends to beat the Chinese with. Some would not beat a Chinese, but rob him of whatever he had and let him go, yelling to him to go quickly. Some, who took no part either in beating or robbing the Chinese, stood by, shouting loudly and laughing and clapping their hands."

By the time the riot ended several hours later, 28 Chinese people were dead.

The Rock Springs Massacre was just one episode of anti-Chinese violence in the years immediately following the passage of the Chinese Exclusion Act of 1882 — which marked the first time the federal government banned immigration by people of a specific ethnicity or nationality. There would be anti-Chinese massacres in Hells Canyon, Ore., and anti-Chinese purges in Seattle and Tacoma in Washington State.

These paroxysms of racist violence, however, could not be neatly characterized as a consequence of the Chinese Exclusion Act; rather, the act was a transmutation of a violent, popular, pre-existing white supremacy into formal, legitimate law. There were other incidents of racial terror towards Chinese in America in the years leading up to the law's passage, including a mass lynching in Los Angeles. And it came at a time of broad white anxieties over the country's changing demographics. The authorization of the Chinese Exclusion Act, and the bloodshed surrounding it, dovetailed with the collapse of Reconstruction in the South, the rise of Jim Crow, and the emergence of terrorist white supremacist organizations like the Ku Klux Klan — themselves responses to what millions of emancipated black people might augur for the country's racial order. Like the Exclusion Act, the Plessy decision in 1896 would go on to make white supremacy a matter of settled law, but it would hardly stanch the flow of blood: over the next six decades, more than 4000 Black people would be lynched.

As a practical matter, these mechanisms of white supremacy — legitimate and lawful; violent and extra-legal — were both manifestations and accelerants for each other. Municipal leaders and local law enforcement rarely investigated even the most public spectacle lynchings; in many cases, they would be present while the carnage unfolded, providing crowd control for the proceedings. When racial caste was not enforced by the state or its agents, it was enforced by vigilantism and mobs. It was guns, nooses, and dynamite that gave restrictive covenants their teeth. The popular will was expressed in both law and lawlessness.

Federal laws against lynching never passed in large part because many officials in Washington, up to and including sitting presidents, were themselves sympathetic to white supremacy or reluctant to pick a fight with Southern lawmakers and voters. Which is to say: it has historically been politically inconvenient for government officials to confront violent white supremacy. This is in large part because it is impossible to find any period in American politics in which the notion that there should be a racial order with white people at the top, or the idea that the United States is and should remain a country for white people, has not enjoyed a robust mainstream constituency.

In the aftermath of the deadly shooting last weekend in El Paso, Texas, that left at least 21 people dead — most of whom were Latino, as my colleague Lulu Garcia-Navarro reminds us — there was fresh scrutiny paid to President Trump's rhetoric. As the alleged gunman had in his hate-filled screed, Trump had often derided Latino migrants to the southern U.S. border as "invaders." But the alleged gunman also alluded to the "great replacement theory, a view most explicitly articulated by avowed white nationalists that holds that United States (and the "West," more broadly) is in danger of being overrun by a population of nonwhites.

But this belief is hardly the domain of the fevered fringes. Consider the most recent annual large-scale survey of American public opinion by the Public Religion Research Institute, a nonpartisan research group in Washington, D.C. Respondents were asked how they felt about the country's rapidly changing demographics. While a majority of those surveyed said they thought that the United States becoming a majority non-white country by 2045 would be mostly positive, nearly 60% of Republicans felt that it would be mostly negative. Six in 10 Republicans also said that they felt like strangers in their own country, while a majority of white respondents (and nearly 80% of Republicans) said there should be stricter limits placed on legal immigration to the U.S. Almost six in 10 white evangelical Protestant said immigrants threatened American society. Just as it did at the end of the 19th century, the idea that a rapidly browning populace poses a danger to the Republic continues to enjoy wide purchase.

In the post-civil rights period, a fragile consensus emerged around the most public racism, and new mores made it far less acceptable for white supremacy to be overtly stated. But this hardly meant that the popular forces undergirding it evaporated — how could something be so elemental ever be blotted out? And as long as the formal expression of those sentiments remain in place — in criminal justice, in housing, in employment, in immigration policy — then it will remain dangerously easy to activate the less legitimate violence that has always been twinned to it. That means that more bloodshed, like the carnage we saw in El Paso, Texas, is not only possible, but inevitable.