Accessibility links
The Treaty Of Versailles And Its Rejection Of Racial Equality : Code Switch A century ago, Japan submitted a proposal for racial equality in the Treaty of Versailles. The U.S. struck it down. What followed had implications for World War II and Japanese Americans.

A Century Later: The Treaty Of Versailles And Its Rejection Of Racial Equality

A Century Later: The Treaty Of Versailles And Its Rejection Of Racial Equality 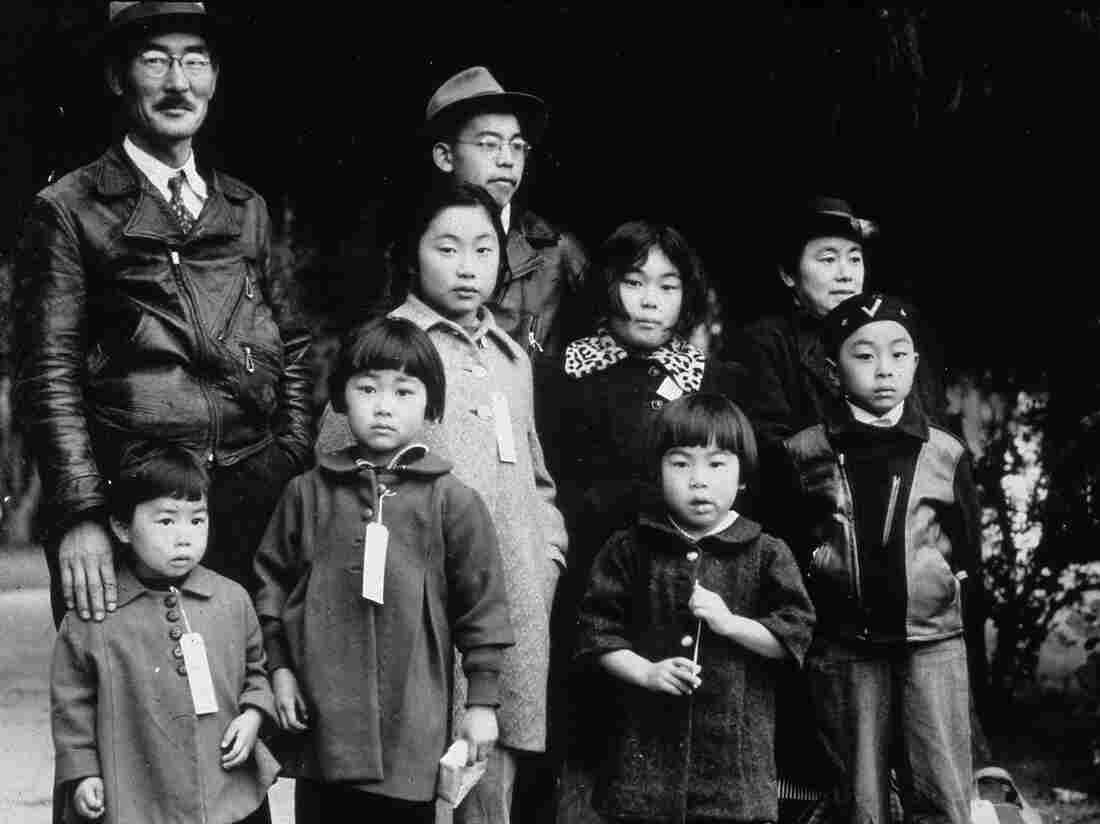 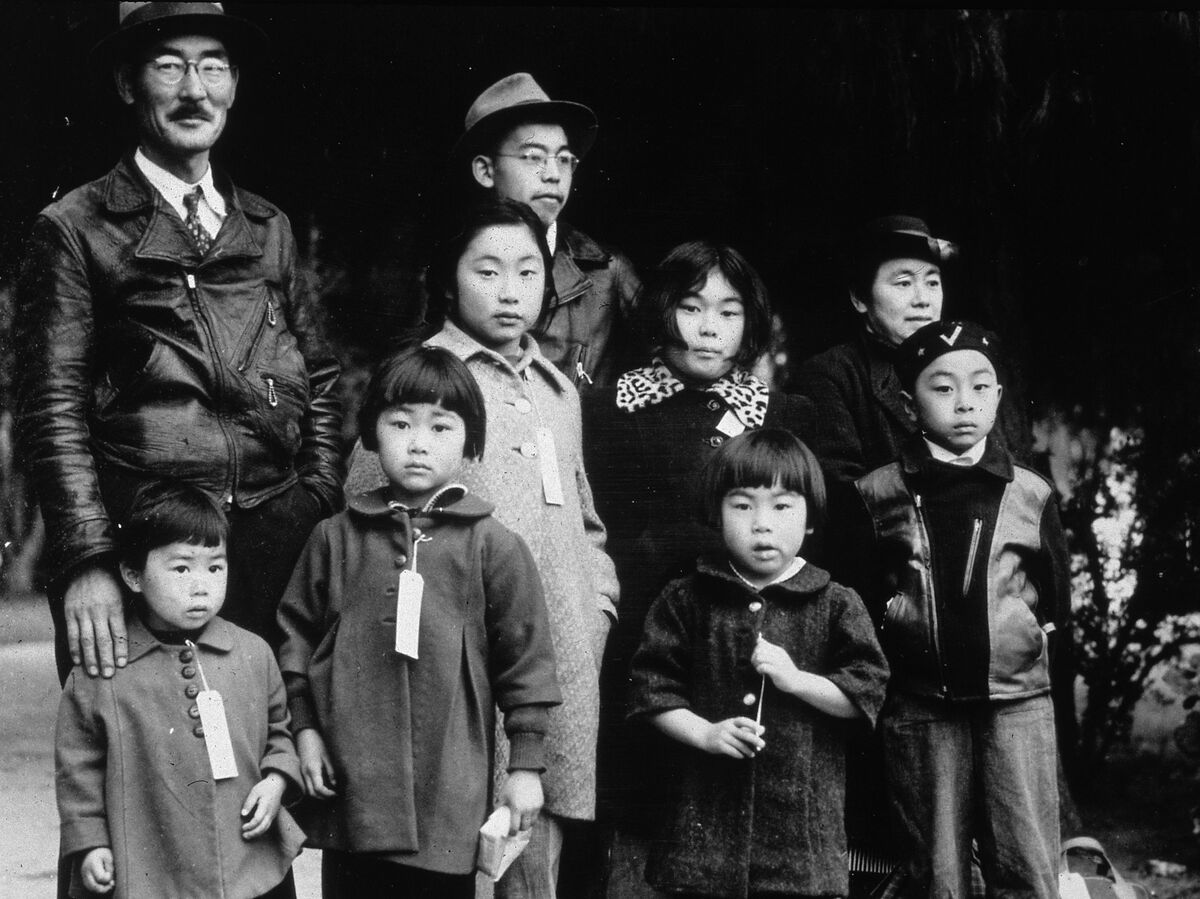 Members of the Japanese American Mochida family, in Hayward, Calif., await relocation to an incarceration camp during World War II.

A century ago, a new world order began.

The Treaty of Versailles concluded the war to end all wars. Constructed through diplomacy, a fragile peace replaced global bloodshed.

The treaty's proclamations are now iconic: that nations should have the right to self-determine, that a war's victors should negotiate how to move forward, that the defeated powers should be held responsible for the damage.

Yet the treaty, negotiated by the key players in World War I — notably France, Great Britain, Italy and the United States — was deeply flawed and could not fend off the rise of fascism, the Nazi party and, eventually, World War II.

Versailles' mixed legacy is even further complicated by a little-known attempt by Japan, one of the emerging players at the table, to move the world forward on the issue of racial equality.

Japan asked for, and nearly got approved, a clause in the treaty that would have affirmed the equality of all nations, regardless of race.

For all of the history forged, some historians believe the great powers missed a pivotal opportunity to fashion a much different 20th century.

A driving force behind that vision for the future and the lofty ambitions of the treaty was U.S. President Woodrow Wilson, the lead negotiator at the Paris Peace Conference.

In 1918, a few months before he set sail for Paris, Wilson addressed Congress to lay out his now-famous principle of self-determination, an idea that would guide the Versailles negotiations and the final treaty that emerged:

"National aspirations must be respected; peoples may now be dominated and governed only by their own consent. 'Self-determination' is not a mere phrase. It is an imperative principle of actions which statesmen will henceforth ignore at their peril."

Japan's Racial Equality Proposal would have strengthened Wilson's call for self-governance and equal opportunity. Yet, when the victors signed the treaty, that language was nowhere to be found.

"At the bottom of all of this is the idea that certain people of color cannot be trusted and people of color do not deserve a place, not only on the world stage but also in our own communities," says professor Chris Suh who studies Asian American history.

The rejection of the proposal would play a role in shaping the U.S.-Japan relationship, World War II and Japanese American immigration. It sheds light on the treatment of nonwhite immigrant groups by the U.S. and its legacy of white supremacy.

"Basically ... there continues to be this sense of racial superiority among the Americans" toward Japan, Suh argues. 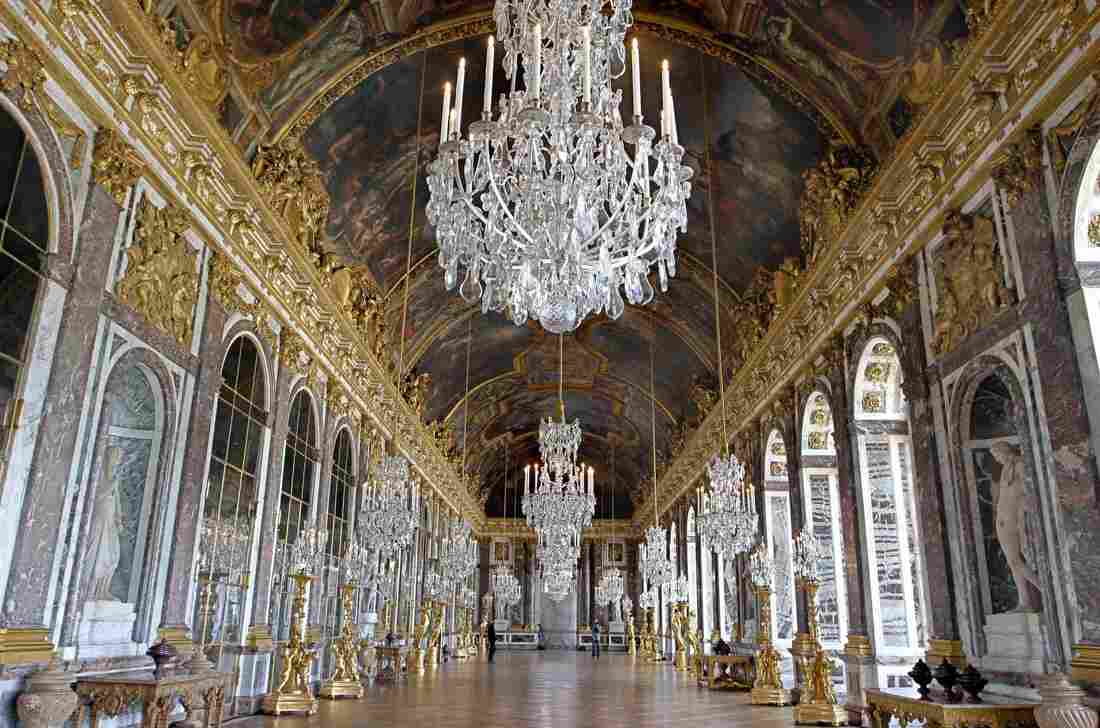 The Hall of Mirrors at the Palace of Versailles, near Paris, on June 25, 2007. The Treaty of Versailles was signed here on June 28, 1919. Jacques Brinon/Associated Press hide caption 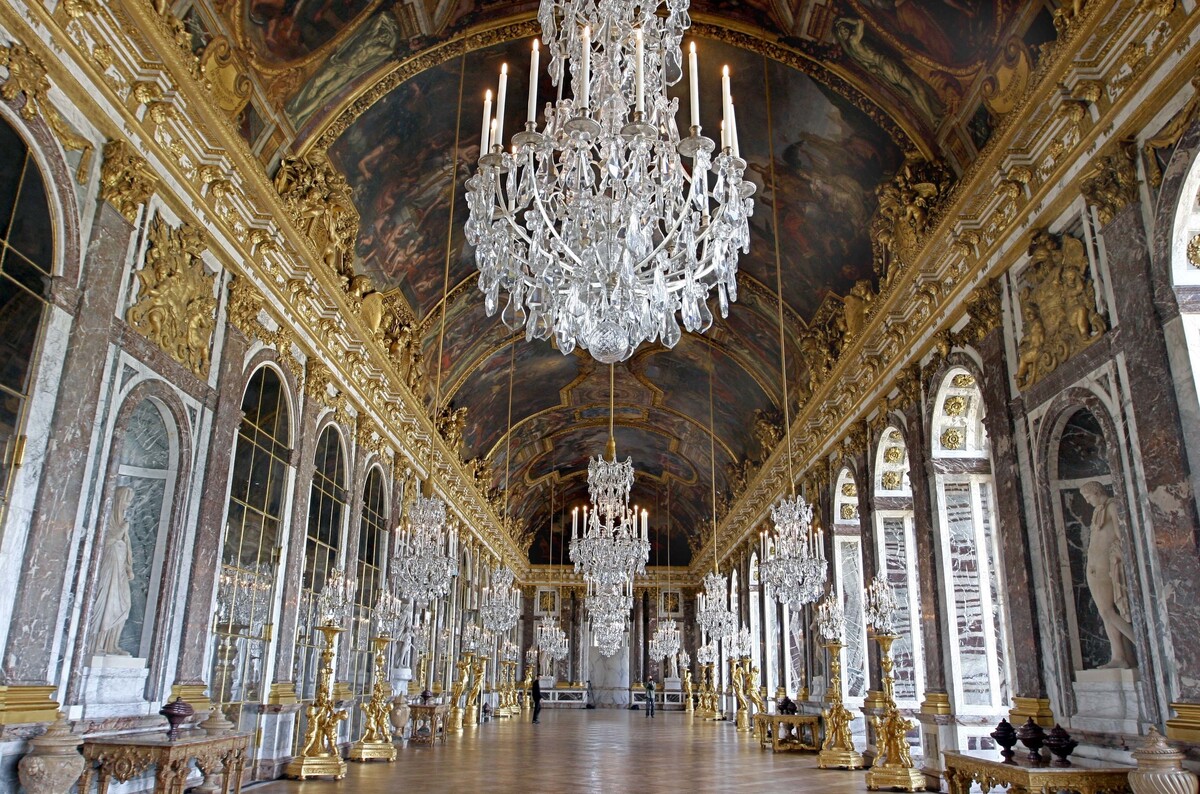 Following its victory in the Russo-Japanese War in 1905 and then its participation as an Allied power during World War I, Japan rose as a mighty player on the world stage.

Seeking to solidify that new power, the Japanese delegation at the Versailles negotiations sought to add language about racial equality into the proposed treaty's preamble. Its immediate goals were to strengthen its diplomatic standing and earn an equal seat at the table.

Here are the exact words that Japan initially proposed:

"The equality of nations being a basic principle of the League of Nations, the High Contracting Parties agree to accord as soon as possible to all alien nationals of states, members of the League, equal and just treatment in every respect making no distinction, either in law or in fact, on account of their race or nationality."

To be clear, historians say the Japanese were not seeking universal racial suffrage or improving the plight of black Americans, for example. But, the added language would have meant that Japanese immigrants coming to the U.S. could be treated the same as white European immigrants.

France got behind the proposal. Italy championed it. Greece voted in favor.

But Australia pushed back. The British dominion had instituted a White Australia Policy in 1901 limiting all nonwhite immigration. Australian Prime Minister William Morris Hughes strong-armed the rest of the British delegation into opposing the proposed clause and eventually got Wilson's support too.

Wilson came up with a way of killing the proposal without ever openly saying he opposed it. The U.S. president imposed a "unanimity ruling" that effectively squashed the racial equality language even though a majority of the nations supported it.

As chairman of the League of Nations Commission, Wilson had approved a number of other issues at the conference without such a unanimous vote. His call for consensus was not a petition for democracy. It was a shrewd calculation.

Wilson's top priority at the conference was seeing the League of Nations created and the treaty ratified. The last thing he wanted was to alienate the British delegation, and he was not willing to let the Racial Equality Proposal derail those efforts. But, in a nod to appease Japan, he supported its demand to keep war-acquired territories like Shantung. 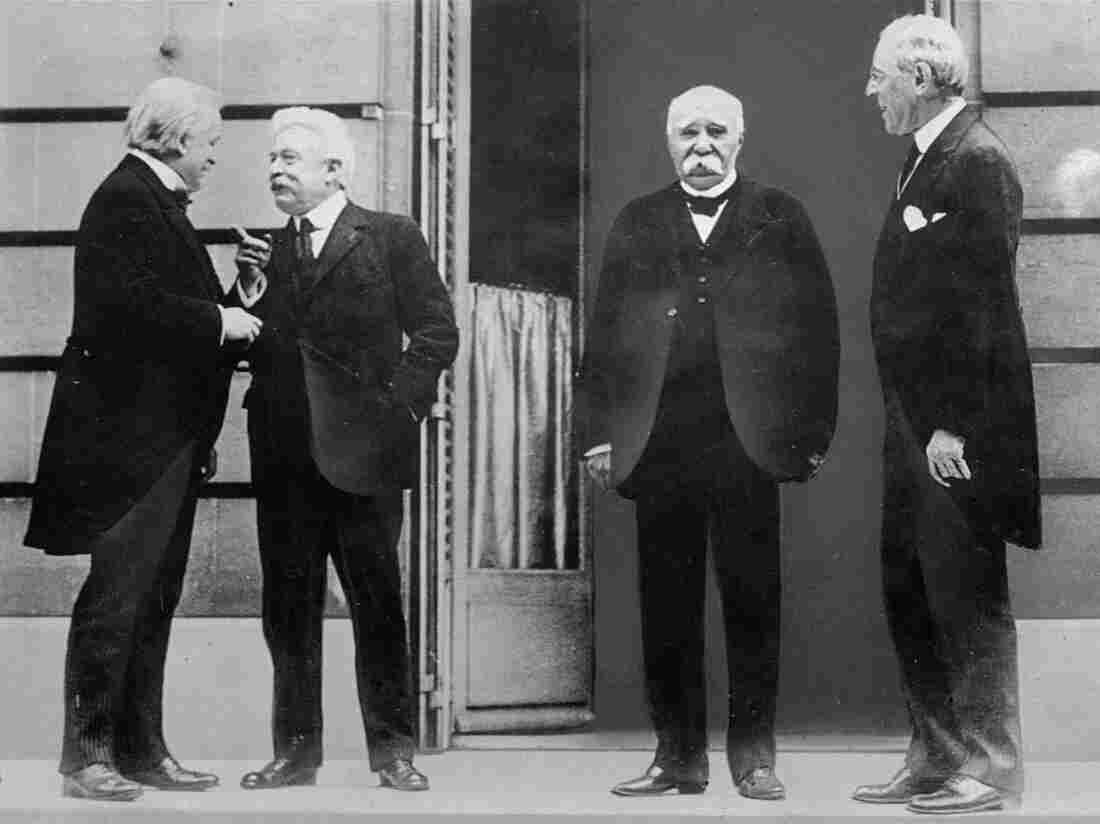 The Big Four of the Allies chat while gathering at the Palace of Versailles in 1919 for the Treaty of Versailles, which officially ended World War I. They are (from left) David Lloyd George of Great Britain, Vittorio Orlando of Italy, Georges Clemenceau of France, and Woodrow Wilson of the United States. Associated Press hide caption

The Big Four of the Allies chat while gathering at the Palace of Versailles in 1919 for the Treaty of Versailles, which officially ended World War I. They are (from left) David Lloyd George of Great Britain, Vittorio Orlando of Italy, Georges Clemenceau of France, and Woodrow Wilson of the United States.

Though scholars disagree on the exact reasons for the opposition by Australia and the U.S., many say the key factor was migration.

The racial equality clause represented "one of the first attempts to establish ... the unprecedented principle of free and open migration," says Frederick Dickinson, a University of Pennsylvania professor of Japanese history.

Japanese migration to the U.S. had skyrocketed in the late 19th century.

Japan's industrialization and falling mortality rates created an overpopulation problem. Following the 1882 Chinese Exclusion Act, which prohibited Chinese laborers from immigrating to America, contractors on the West Coast brought Japanese migrants over to fill their need for inexpensive labor.

The Modern Superpower Summit: A Performance On The High Wire

In 1907, the U.S. and Japan had negotiated the "Gentlemen's Agreement," which was designed to address the growing Japanese emigration rate. In it, Japan agreed to curb how many migrants it sent over, if the U.S. would desegregate Asian and white children in San Francisco public schools.

Unlike the unilateral Chinese Exclusion Act, the Gentleman's Agreement gave Japan some say in Japanese immigration to the United States.

Anti-Japanese sentiment was spreading up and down the West Coast, and lawmakers there called for stricter legislation. California passed the Alien Land Law of 1913, which prohibited Japanese immigrants from owning land.

And so, by the end of World War I and the negotiations in Paris, Americans feared waves of Japanese immigrants. When word of the Japanese proposal reached Washington, pressure mounted from lawmakers to reject the clause. Democratic California Sen. James Phelan sent a telegram to the U.S. delegation in Paris, writing:

"Believe western Senators and others will oppose any loophole by which oriental people will possess such equality with white race in United States. It is vital question of self-preservation."

With mounting pressure on the homefront and from Britain and its dominions, Wilson killed the proposal.

The Japanese lost their bid for racial equality. Ultimately, the treaty Wilson had staked his presidency on was rejected by Congress. He suffered a stroke later in 1919, did not seek a third term and died three years after leaving office.

The same year as Wilson's death, in 1924, President Calvin Coolidge unilaterally banned all Japanese immigration with the Johnson-Reed Act.

Building up to World War II

In the years after Versailles, relations between the onetime allies, Japan and the U.S., hardened. The rejection of the proposal left some members of the Japanese delegation bitter.

The interwar years saw increased Japanese aggression as it attempted to gobble up more land and further assert its power on a global level. Japan became an imperial power consumed with nationalism and militarism.

Japan struggled to resettle its burgeoning population. Its invasion of Manchuria, a region in China, in 1931, led to the resettlement of hundreds of thousands of farmers and migrants there. Ishiwara Kanji, the architect of the invasion, called for a "racial paradise" in this newly established puppet state.

That conflict helped set the stage in the Pacific for World War II. After the League of Nations censured Japan's aggression, the imperial power exited the organization in 1933. 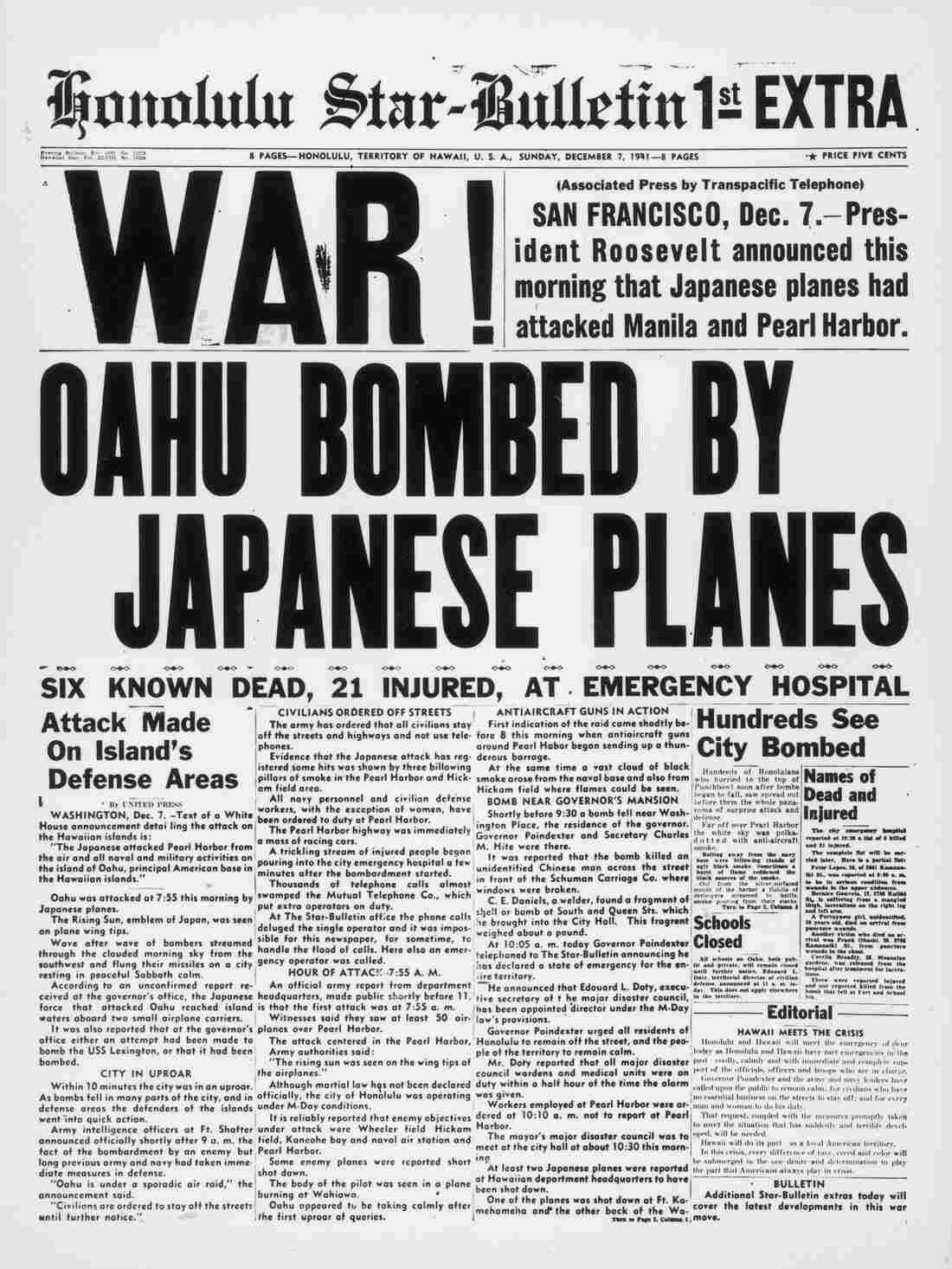 On Dec. 7, 1941, the Honolulu Star-Bulletin reported on the Japanese bombing of Pearl Harbor, Hawaii, within hours of the attack. Three Lions/Getty Images hide caption 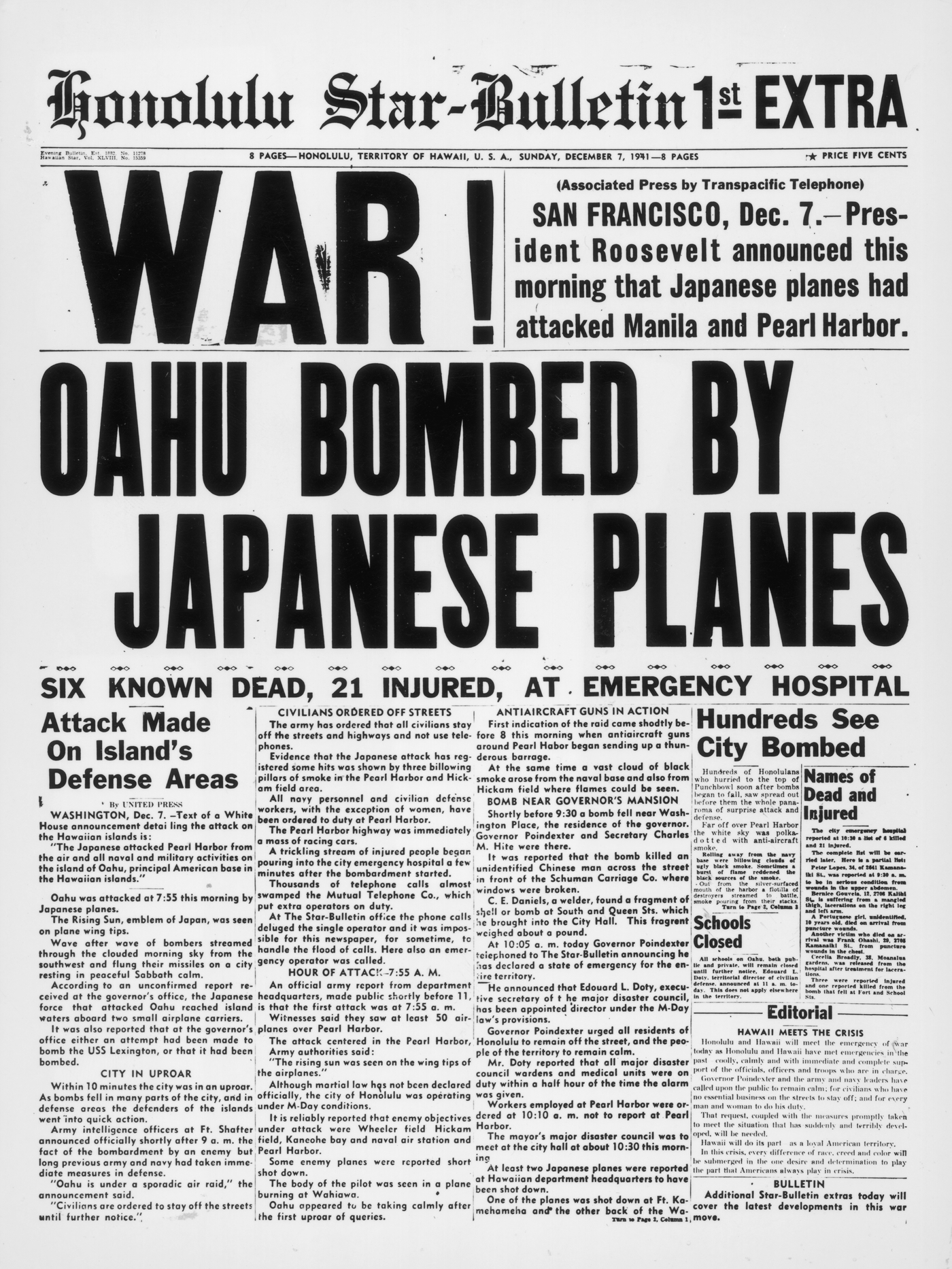 On Dec. 7, 1941, the Honolulu Star-Bulletin reported on the Japanese bombing of Pearl Harbor, Hawaii, within hours of the attack.

Beyond the bloodshed in the Pacific, the domestic toll waged on Japanese Americans has lived on in infamy. More than 100,000 Japanese Americans were forcibly relocated from their homes and incarcerated during what has been called Japanese internment.

The U.S. later acknowledged that it was on the wrong side of history, betraying its values of justice and liberty: The 1988 Civil Liberties Act, enacted by Congress, said that the government's actions against Japanese Americans "were motivated largely by racial prejudice, wartime hysteria, and a failure of political leadership." 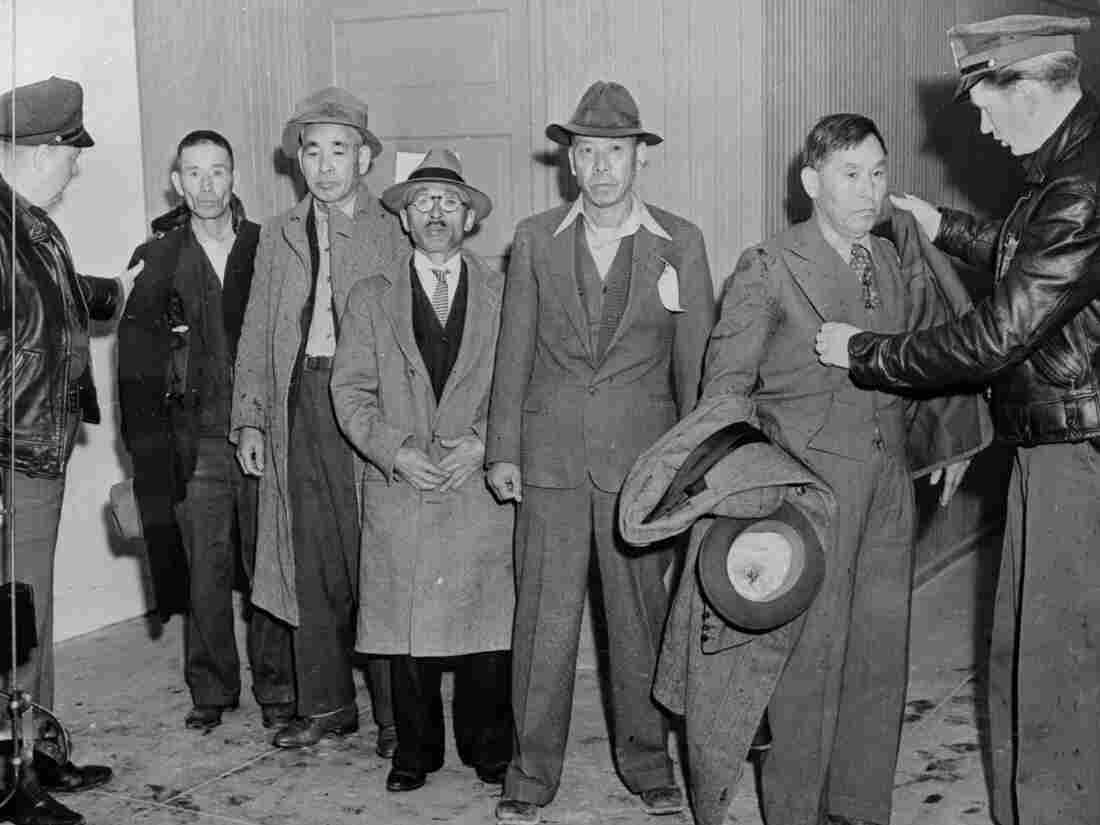 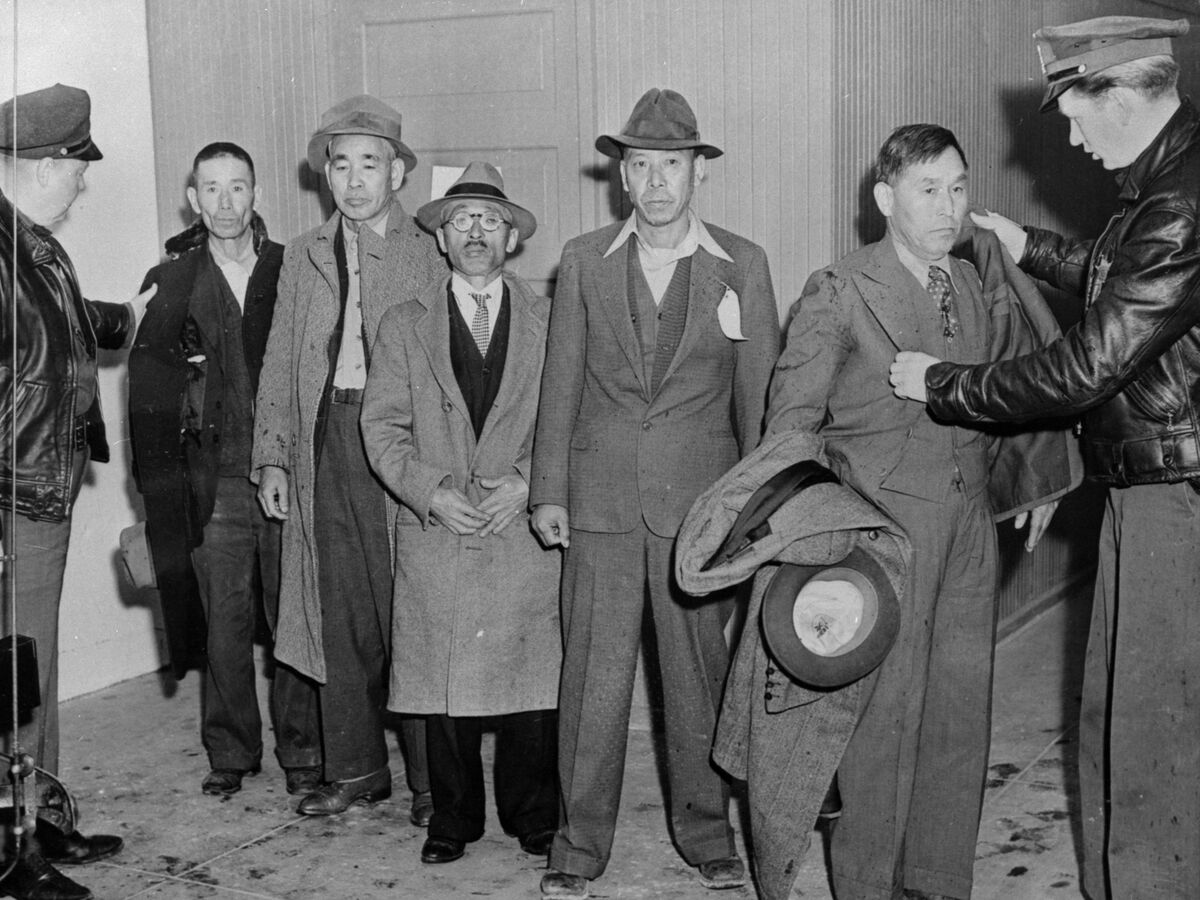 "Obviously whenever people think of Japanese American discrimination in the United States, the big thing that comes to mind is the World War II incarceration," says David Inoue, executive director of the Japanese American Citizens League.

But the Racial Equality Proposal demonstrates that incarceration camps are not the whole story. He sees this proposal as "part of a whole continuum of discrimination that had begun years before and even we see it continuing today ... in other communities that are discriminated against."