Accessibility links
Some 'Podunk' Town In The Middle Of Nowhere : Code Switch "Podunk" is supposed to be bleak and isolated. But there are a few things that people who use the term might not know. For one, it really exists. For another, its history predates the United States. 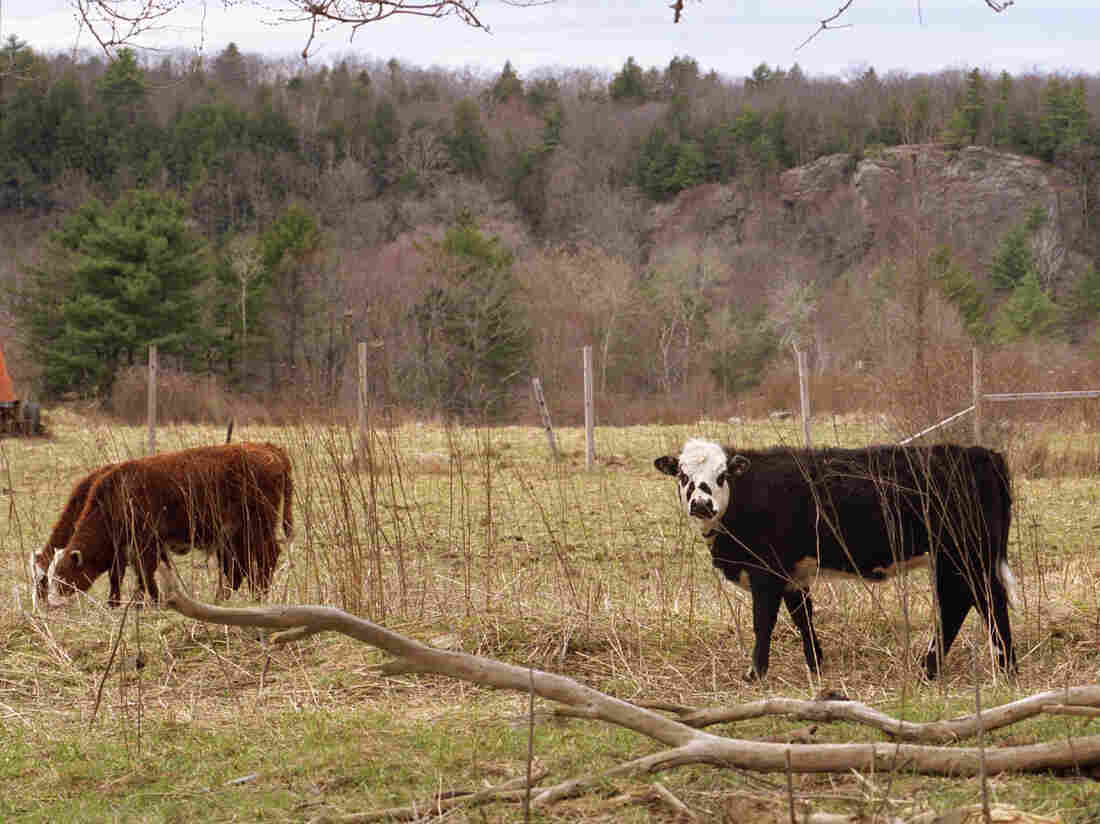 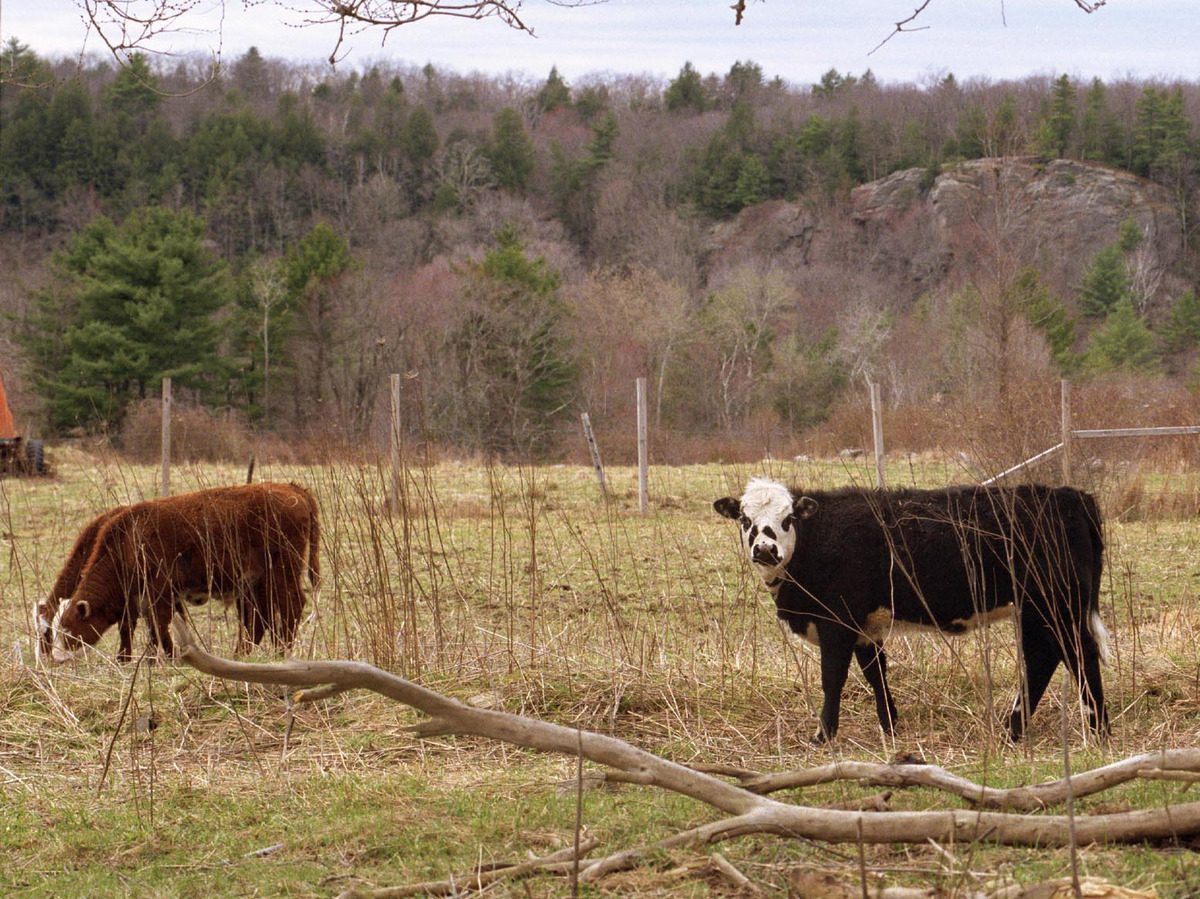 Cows graze in a field in the Podunk section of East Brookfield, Mass.

It happens on every road trip — you're driving from city to city, natural wonder to natural wonder. Every hour is a magical combination of rustic beauty and historic landmarks and fascinating people. Until, one day, things change: The scenery turns gray; the people lose their charm. You find yourself at a rest stop with no toilet paper, where the vending machine eats your last single. It's 90 miles to the nearest motel. Small, but menacing-looking rodents scurry across the road.

You, my friend, are in Podunk. Or as some people say, "Some Podunk town in the middle of nowhere."

Akin to "flyover states," "nowheresville" and "hicksville," people use "Podunk" as a stand-in for anywhere they think doesn't have much going on.

It's a depressing place: bleak, empty, isolated. The people there are probably a little creepy. The food is suss. Any good thing that happens there is highly unexpected (I was in some Podunk town in God-knows-where when I heard that my grandson got engaged!).

A common implication of Podunk is that it's a place so dreary and remote that it's not even worth situating on a map. One of the most famous people to refer to Podunk was Mark Twain, who in 1869 wrote that a certain fact was known even "in Podunk, wherever that may be."

But there are a couple of things that people who use the term probably don't know. First, Podunk is the name of a few real towns. There's a Podunk in Connecticut, one in New York, Vermont, Massachusetts. The Connecticut Podunk is well-known (OK, not that well-known) for an annual bluegrass festival. And folks who live in the various Podunks are pretty well-practiced at pushing back against its common usage. In 1981, someone took The New York Times to task for publishing a Podunk-bashing cartoon. The cartoon, Francis H. Schaefer Jr. wrote, "is a slur to the real Podunk. ... Our Podunk may be no more than a junction in the road, with a population of 30 at tops, but it is definitely a real place."

The other thing people likely don't know? Podunk was a place name long before it became a punchline. Podunk is an Algonquian word. Quick explanatory comma: Algonquian languages are a family of indigenous languages spoken from New England to Saskatchewan to the Great Plains. Those languages include Fox, Cree and Ojibwe. There are a bunch of words in English that have Algonquian roots: skunk, moose, caribou. And according to Arok Wolvengrey, a professor of Algonquian languages and linguistics at First Nations University of Canada, many of those languages are in danger. "Half of those [languages] might be gone within a hundred years," he says. "And we've already suffered a fairly large loss just in the last 500 years in the Americas."

But beyond its Algonquian roots, much of the linguistic history of Podunk is kind of murky.

"We have no idea what the word means," says Ives Goddard, senior linguist emeritus at the Smithsonian Institution and a leading expert on Algonquian languages. "You'll be able to find guesses in the sources if you look around. Don't believe any of it."

(I did, in fact, find some definitions — the most plausible being from the Nipmuc Indian Association of Connecticut's quarterly newsletter: "Podunk or Pautunke, means 'where you sink in mire', a boggy place, in the Nipmuc dialect. But the Podunk called their homeplace Nowashe, 'between' rivers.")

But according to Goddard, when it comes to Native American place names in the Eastern United States, a lot of what we think we know is actually misinformation. He says the standard source for these definitions is a man named William Bright, a linguist who in 2004 wrote a book called Native American Placenames of the United States. "He was a good linguist, a smart guy," Goddard says of his colleague, who died in 2006. "But when he got to Eastern areas, there wasn't any information."

Huden "would look through all this amateur literature and find a [place] name, find a translation, and pick the one he liked," Goddard explains. "And this book was considered authoritative. So if you're looking at Bright, as I just did, he cites Huden, and then he cites like three or four people after Huden who are just copying Huden, of course, and are equally uninformed."

Goddard said that story can be told of many Native American place names in southern New England, New Jersey, all the way down into Virginia. There are exceptions — for instance, we know that "Connecticut" means "long river." But with a lot of others, he says, "We don't really have any hope of figuring them out."

I asked Goddard if he thought it was offensive that people were using an Algonquian word to describe places they thought of as insignificant. "I think the jokey use of Podunk isn't really connected. The fact that this is a Native American name to begin with is irrelevant. I don't think anybody knows that," he said. "Somebody had seen this place name out the window of their bus or someplace where they spent their summers or something and it just became a funny word to them."

Wolvengrey seemed to have a similar take. He hadn't known that Podunk was an Algonquian word before we got in touch, but he said he didn't think there was anything particularly sinister about its use. "If it was, I suppose, directed in a negative way at a particular cultural group, that would be more troubling," he said. "This simply seems to have attached a particular name — and again, unless someone from a place named Podunk is particularly offended by it, it doesn't sound like it was done with any malicious intent towards any particular people."

Wolvengrey says there are obviously words that "reflect a racist attitude towards indigenous people" — but Podunk doesn't seem to be one of them. And, he adds, there are all kinds of words for places, both negative and positive, that get detached from their original meaning: Shangri-La, for instance, or Xanadu: "Words have interesting histories. They can deteriorate and they can sometimes become much stronger than they were in the first place."

It sounds like there's hope for Podunk. Maybe someday we'll use the word to refer to a center of culture or a lush New England getaway. Or maybe it will continue to be that place where you pray you don't run out of gas. However you use it, remember, it doesn't matter too much — as long as the road to Podunk is paved with good intentions.