Accessibility links
What Does The Word Gung-Ho Really Mean? : Code Switch The word "gung-ho" used to mean "industrial cooperative." So, how did it come to describe that overeager middle-schooler taking high school math? On today's edition of Word Watch, we explore. 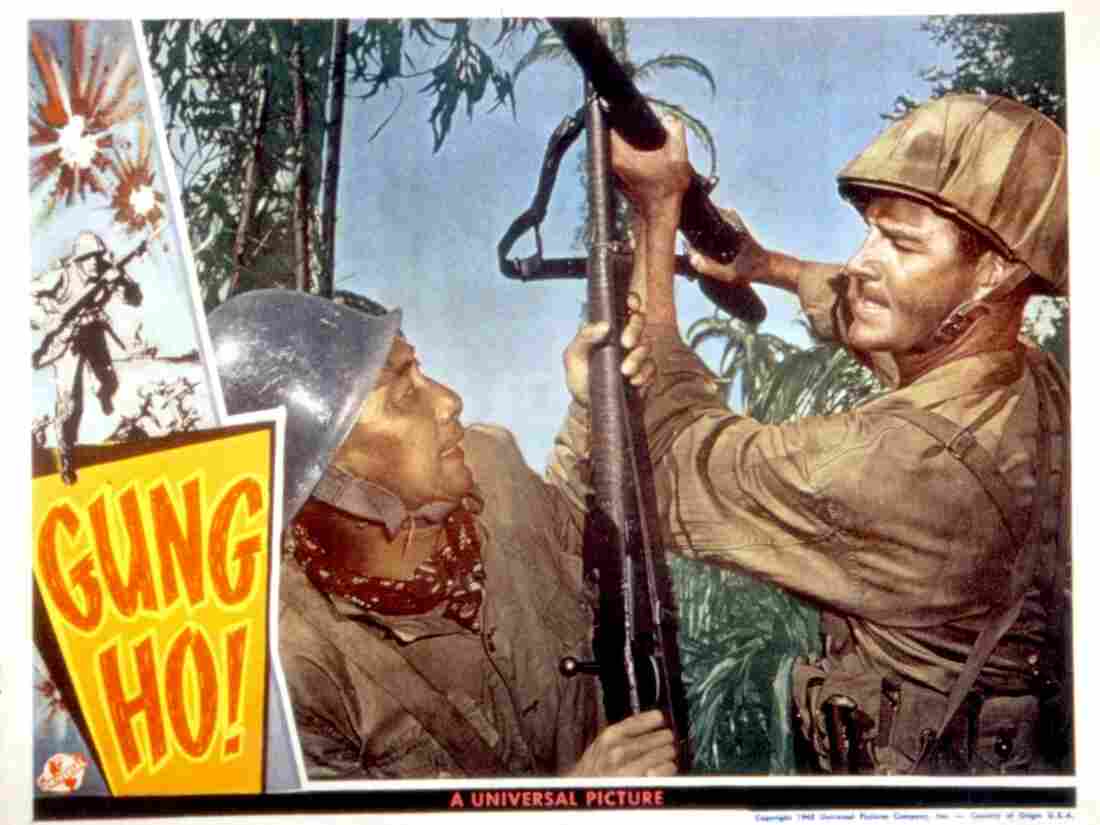 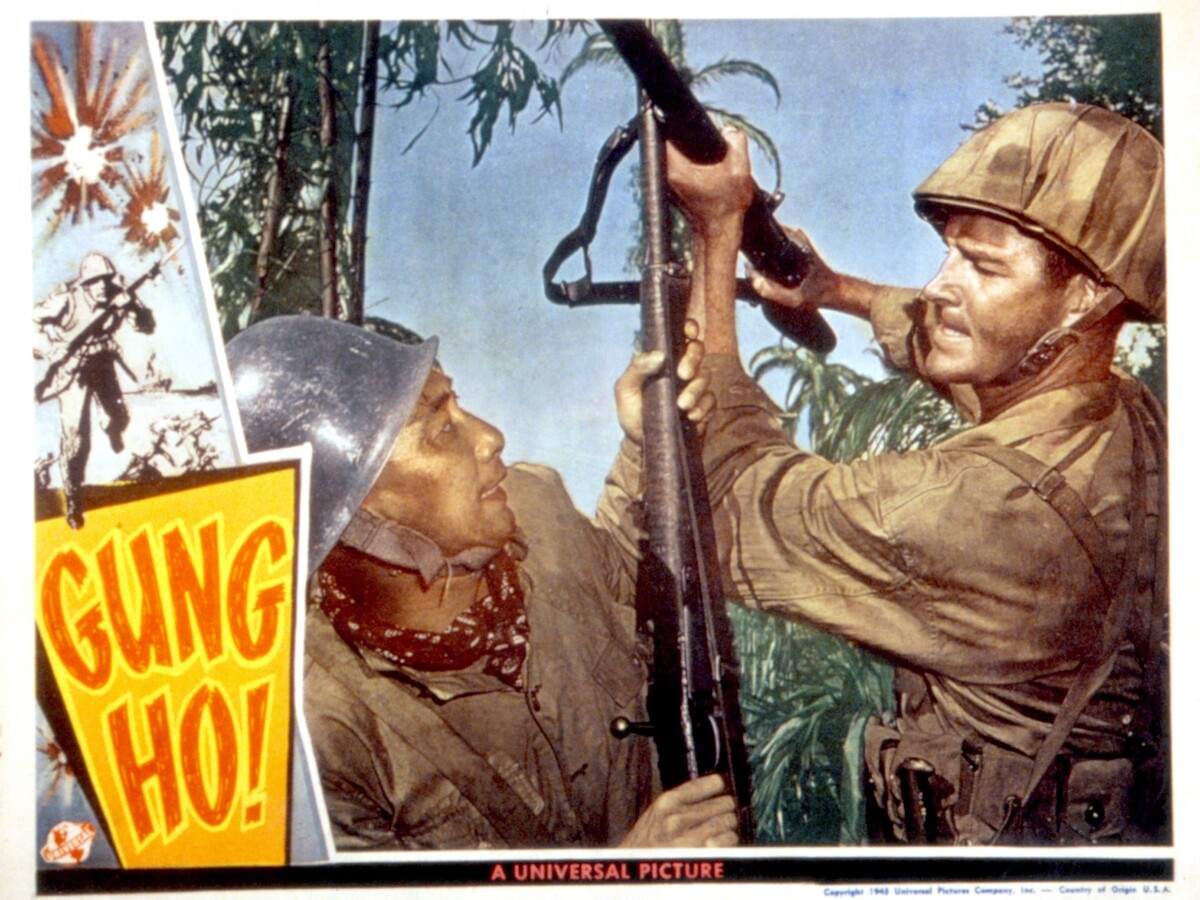 The gung-ho slogan adopted by some Marines became so well-known that it was turned into a 1943 movie.

Maybe you're a college freshman, emailing all of your professors before the semester starts to tell them how absolutely thrilled you are to be in their class. Or perhaps you're a world leader expressing how totally great your international trade talks are about to go.

Or maybe you just had the best idea for, like, a startup. You're drawing up plans on napkins, you can see the city lined with posters for your astrology-based wine club or whatever, you're figuring out what color Tesla you're gonna get with those sweet, sweet Pinot-Scorpio returns. Within hours, you call up a friend to ask them to invest.

"Woah, slow down," they say. "You're being a little gung-ho about this."

工業合作社 was abbreviated, as many long Chinese proper nouns are, to the first character of each part, 工合. Today, we would Romanize it to gōng hé, but in the 1930s, the same sounds turned into kung ho, or gung-ho.

So how did it go from describing a leftist co-op to an overzealous try-hard? To get the full story, we have to go back almost a century, to 1930s China.

By many accounts, China during that era was not doing super well. The country was largely economically reliant on Japan. Civil war was breaking out. In 1937, Japan invaded and kicked off the second Sino-Japanese War. Tens of millions of people living around Shanghai flooded inland, becoming refugees in their own country. The civilian casualties were massive. Over eight years, an estimated 17 million civilians died, and 95 million more people became refugees. 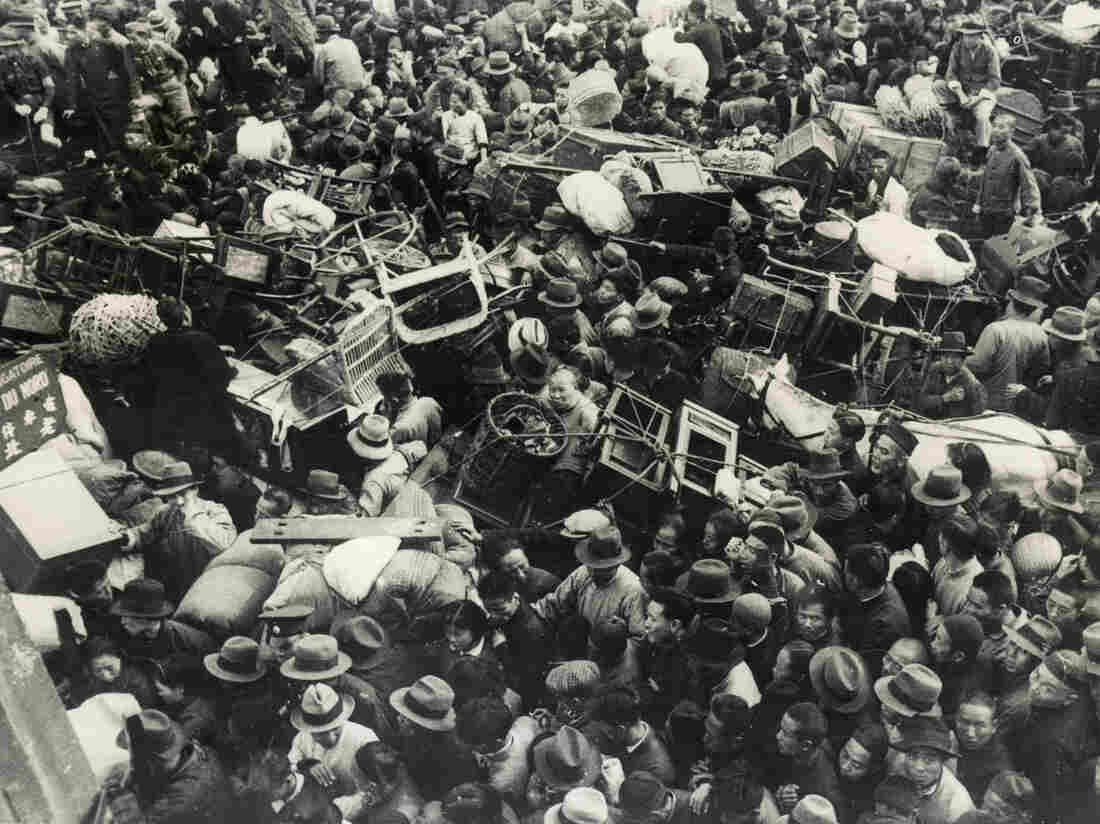 During the 2nd Sino-Japanese War, in late 1940, a crowd of Chinese refugees push to enter the French Concession of Shanghai. George Krainukov/Getty Images hide caption 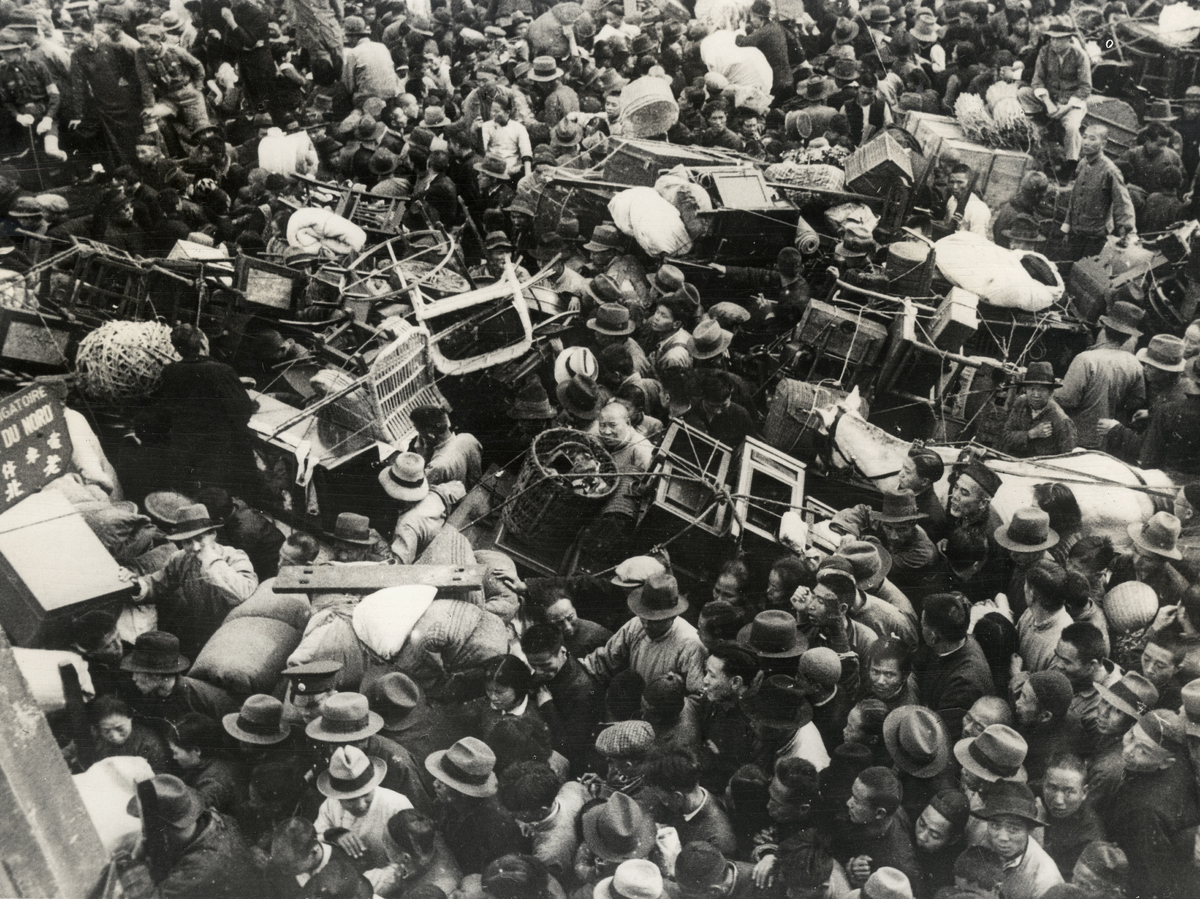 During the 2nd Sino-Japanese War, in late 1940, a crowd of Chinese refugees push to enter the French Concession of Shanghai.

The industrial cooperative movement sought to address the problems caused by the war: a general lack of resources for both civilians and the military, and refugees in need of work. Though the movement was relatively small, with 30,000 workers at 3,000 factories at its peak, it got outsized attention because English-speaking foreigners were involved, many of whom were central to forming the International Committee for the Promotion of Industrial Chinese Cooperatives (ICCIC). Its mission was "organizing the unemployed workers and refugees for production to support the War of Resistance."

According to Anne-Marie Brady, that collaboration was how gung-ho entered the lexicon of many English speakers. Brady is a professor at the University of Canterbury in New Zealand who specializes in politics in China. She says that the country back then "was very different from China today. It was quite easy for foreigners to engage with activities in China and be part of a solution for addressing a serious problem like refugees."

One such foreigner was a fellow named Evans Fordyce Carlson. Carlson was a U.S. Marine who was somewhat involved with the ICCIC. The term's current use stems from the way Carlson interpreted and popularized it.

In 1937, Carlson arrived in Shanghai to serve his third tour in China. He was the first foreign military observer of the guerrilla soldiers of the 8th Route Army, (aka the Red Army, aka the Communist army). Carlson spent nearly two years with the members of the Red Army, traveling thousands of miles with them, sometimes behind enemy lines. He was impressed by their mobility and flexibility, as well as the concern for their fellow soldiers' welfare. A Life magazine profile from 1943 said, "In Carlson's opinion the 8th Route Army is the best-organized, best-led fighting force in the world today for its size and purpose."

And for some reason, Carlson associated the Red Army with the Industrial Cooperative movement. He believed that gung-ho meant something about teamwork. (It doesn't, and according to Brady, the cooperatives would have only been affiliated with the Communists in local pockets.)

Between 1939 and 1941, Carlson's life took some odd twists and turns. In 1939, he resigned from the Marine Corps because he was being censured for his vocal pro-China views. Then he wrote two books about China (one titled Twin Stars of China: A Behind-the-Scenes Story of China's Valiant Struggle for Existence by a U.S. Marine who Lived & Moved with the People). He spent time touring China, examining the cooperatives and slowly coming to believe that U.S. war with Japan was inevitable.

So soon enough, Carlson rejoined the Marines and was given control of the newly-established 2nd Marine Raider Battalion, which came to be known as "Carlson's Raiders." 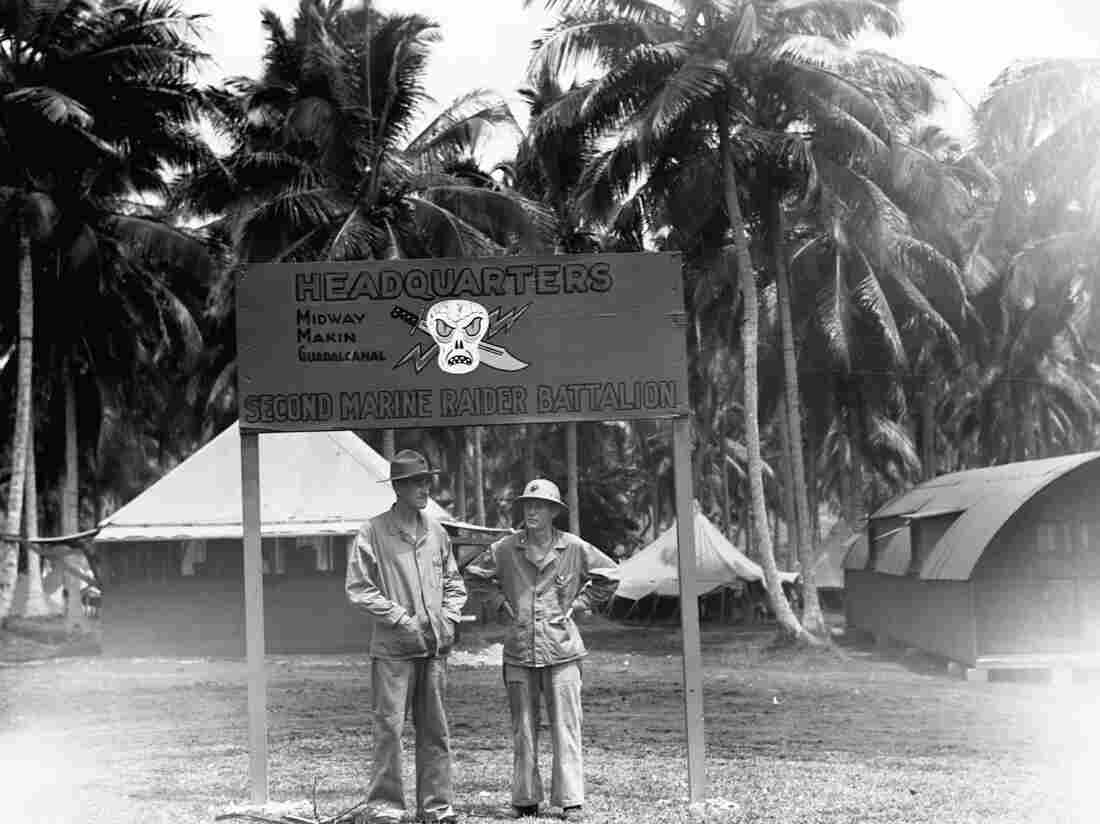 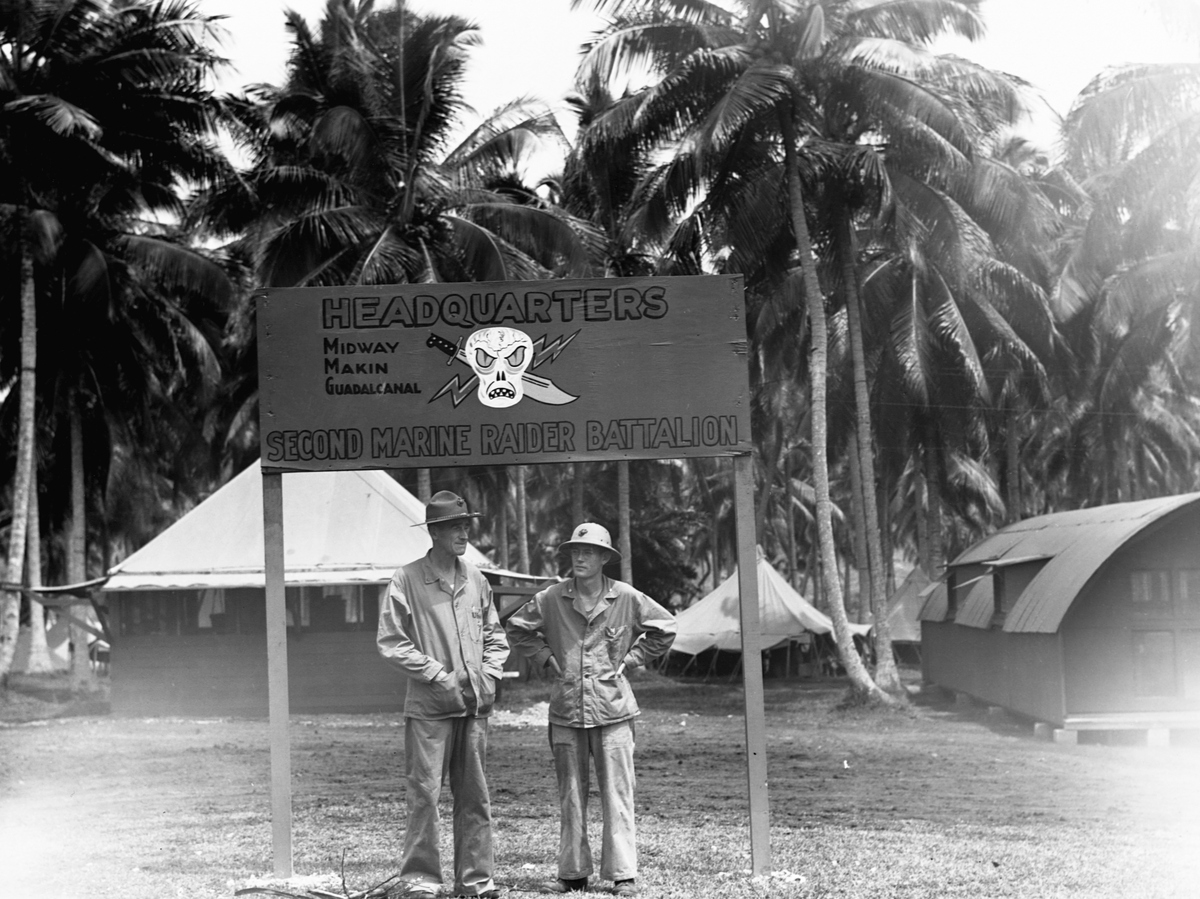 Lt. Col. Evans Fordyce Carlson, shown with Maj. Ralph H. Coyte, was given control of the 2nd Marine Raider Battalion, which came to be known as "Carlson's Raiders."

The Red Army influenced now-Lt. Col. Carlson's leadership in a deeply idealistic way; every man would have input into the plans and officers had no distinct privileges until everyone felt they were earned. In From Makin to Bougainville: Marine Raiders in the Pacific War, Maj. Jon. T. Hoffman describes it as "an unconventional military philosophy that was an admixture of Chinese culture, Communist egalitarianism, and New England town hall democracy."

Calson told Life, "I was trying to build up the same sort of working spirit I had seen in China where all the soldiers dedicated themselves to one idea and worked together to put that idea over. I told the boys about it again and again, I told them of the motto of the Chinese Cooperatives, Gung Ho. It means Work Together — Work in Harmony." (Again, it did not.)

He went on: "My motto caught on and they began to call themselves the Gung Ho Battalion. When I designed a field jacket to replace the bulky and orthodox pack they even called it the Gung Ho jacket. And they named every new thing Gung Ho. It became the watchword."

He's not exaggerating about every new thing. According to Christopher Blaker, a historian and editor with the U.S. Marine Corps History Division, "Their long combat knives were called 'Gung Ho' knives, their hunting jackets were christened 'Gung Ho' jackets, and meetings in the field became 'Gung Ho' meetings. They even named their camp on the island of Espiritu Santo 'Camp Gung Ho.' "

Carlson's Raiders gained acclaim and recognition for the action they saw in the Gilbert and Lower Solomon Islands in mid-1942. These were some of the first World War II victories for the U.S. against Japan, so the U.S. made sure to get the story in front of the public. Carlson's Raiders were celebrated by the military and covered extensively in the Saturday Evening Post.

In 1943, there was even a movie released called Gung Ho!: The Story of Carlson's Makin Island Raiders (an old-fashioned propaganda romp that could probably stand to be a third the length). And so, the phrase leaked its way into the English language.

A curious thing happened to gung-ho as it spread, though — it started to be a little less earnest, taking on the meaning it has now, that someone's a little too enthusiastic. The linguist Albert Moe, who wrote an extensive article about gung-ho in 1967, writes, "As early as the latter part of 1942, Marines other than those in the Second Raider Battalion used gung-ho as a term of disparagement to describe anyone whose conduct or behavior was obnoxious or offensive." Apparently, the Marine Raiders were known for being rowdy and ready to prove how "rough and tough" they were. "As a result, the Gung Ho Battalion and its personnel soon were referred to as the 'gung ho bastards.' "

Outside of conversational use, gung-ho seems to have taken on some other vague definitions, in order to signal anything from teamwork to militariness to a kind of broad "Asian-ness." It's the name of so many different companies (like really): a French-Cajun G.I. Joe Character, a business strategy book from 1998 that exotifies both the Chinese origins AND Native Americans, and a 1986 Ron Howard film about Japanese businessmen in Pennsylvania, featuring Engrish that will make your skeleton ache.

With time and enthusiasm (maybe too much enthusiasm) gung-ho has come to mean whatever people want it to mean. So next time you hear it in the wild, remember that it was originally Chinese jargon that English speakers wanted to be meaningful so hard that they just ... made it happen.