Accessibility links
Reflections From A Jew At A Mock-Jewish Restaurant : Code Switch On a trip to explore her Jewish-Ukrainian roots, one writer made a stop at a controversial Jewish-themed restaurant, where guests are served matzo at every meal and invited to haggle over the check.

Reflections From A Jew At A Mock-Jewish Restaurant

Reflections From A Jew At A Mock-Jewish Restaurant 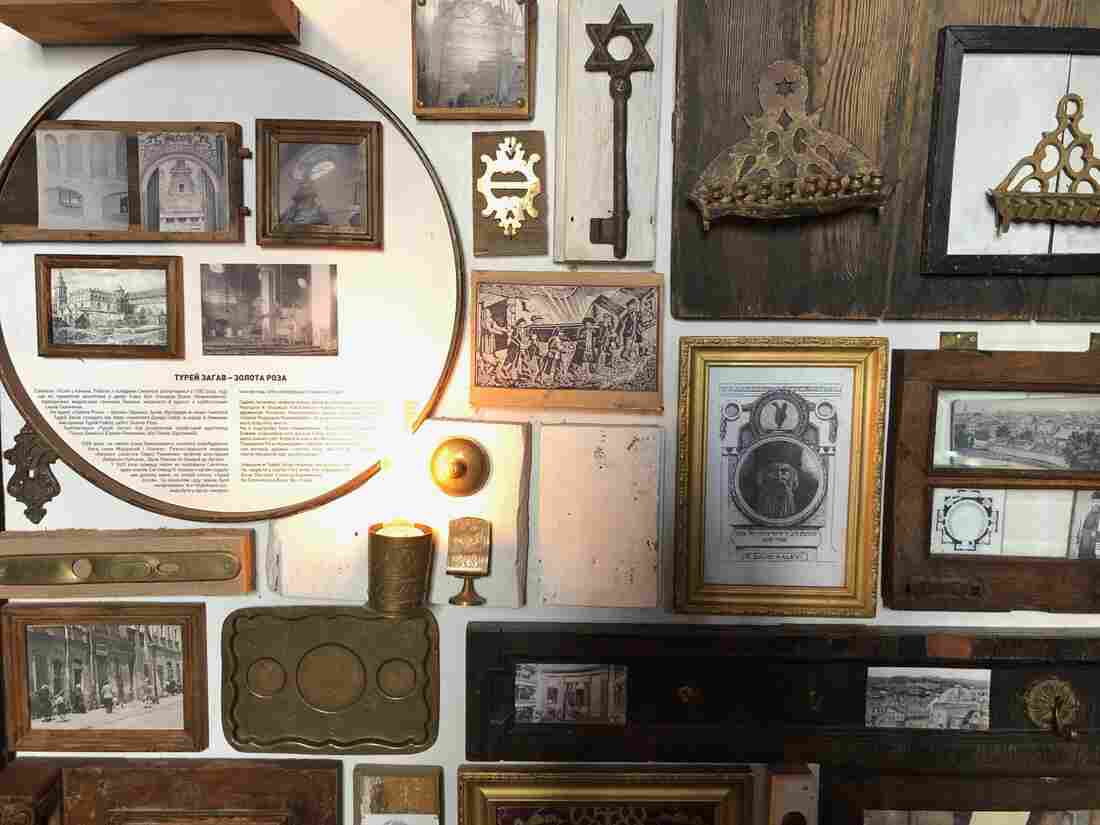 The walls of the Golden Rose restaurant in Lviv, Ukraine, are covered with collages that tell detailed stories about the Jewish legacy of the city. Alex Schmidt hide caption 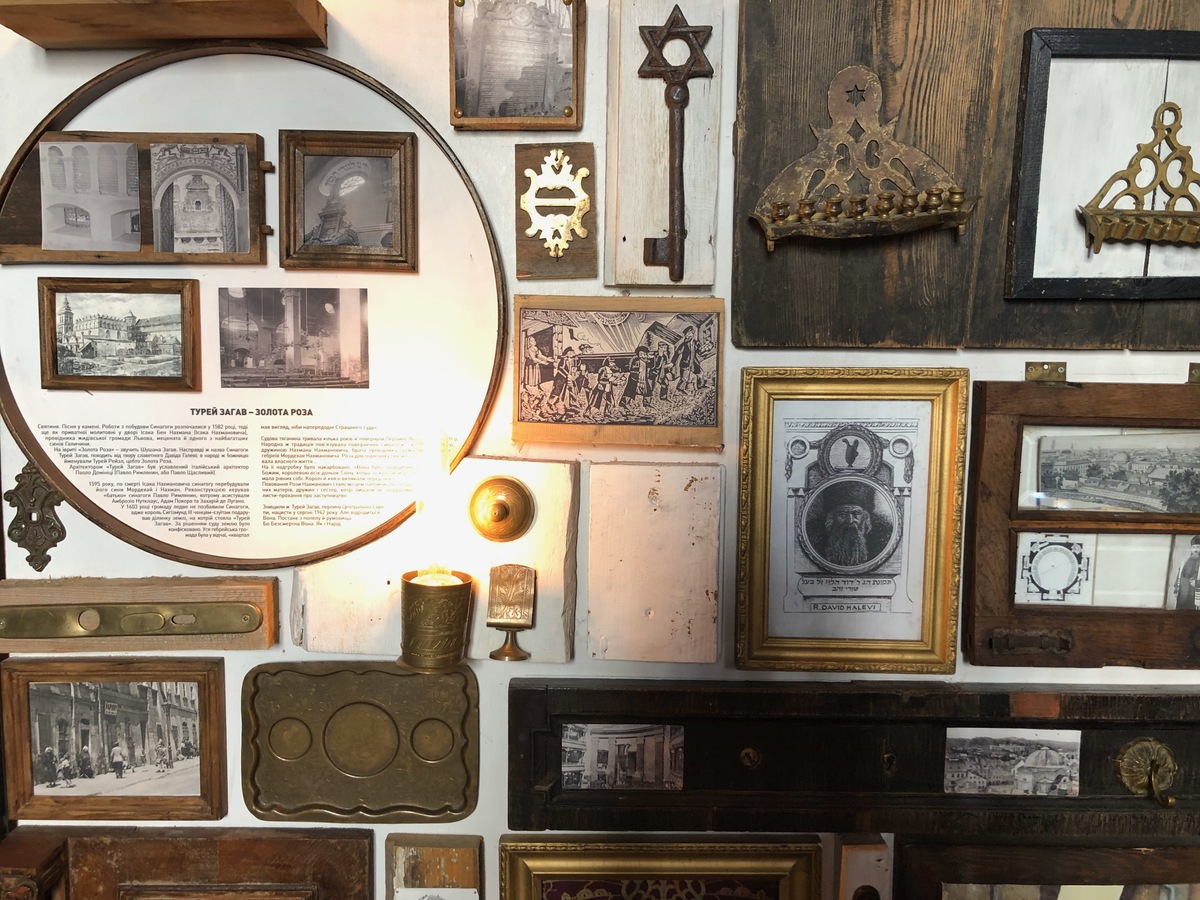 The walls of the Golden Rose restaurant in Lviv, Ukraine, are covered with collages that tell detailed stories about the Jewish legacy of the city.

At the Golden Rose restaurant in Lviv, Ukraine, your non-Jewish host and servers will do their utmost to surround you with purportedly Jewish touches. You'll be greeted with a wan "Shalom" as you enter, a waiter will sometimes appear in peyot (Jewish sidelocks) and kippah (head covering), and you'll be invited to haggle over your check.

It may seem odd that I decided to visit this restaurant on a recent trip to explore some of my family's roots. I expected to feel offended by its caricatures of Jews, and, by extension, myself. But the Golden Rose turned out to be more complex than it first appeared. In fact, this whole trip was a complex undertaking.

According to my family's Ukrainian guide, Alex Dunai, the two main reasons people give for visiting the decimated Jewish towns of their ancestors in Eastern Europe are curiosity and a desire to pay respects. I'm not sure I was clear on my motivations when I got the idea for the trip a year ago. There was curiosity, for sure, to see whether I would feel a bond with my place of ancestry. But it seems now that the stop at the Golden Rose was also an urge — however naive, privileged and ultimately impossible — to see whether I could feel what it is to experience racism or discrimination in a country with a history of animus against people like me. Perhaps, I thought, I might be able to empathize more deeply with those currently experiencing it.

I was born in Los Angeles, but both of my father's parents were from this part of the world — my grandmother, Dora, from a small town north of Warsaw, Poland, called Kolno and my grandfather, Jacob, from an even smaller village called Glinyany, a bit east of Lviv (it used to be part of Poland, though now it's in Ukraine). Both left with their families for Mexico, where they were warmly welcomed, before World War II. Neither of my grandparents nor their parents spoke Polish after they left. Most of my grandparents' lives were lived in Mexico City; my father and his siblings were born there. My dad had never been to his parents' place of birth before this trip.

In Europe, my immediate family escaped the worst of Jewish persecution. Still, my grandfather had stories of cruelty to share from before the Nazis arrived, and it seems likely that my grandparents' extended families were killed or harassed when the war started. In the Janowska concentration camp, at least 100,000 Jews from Lviv and surrounding areas died between 1941 and 1943. More than 20 synagogues in Lviv were destroyed. Today, only a tiny remnant of the once vibrant Jewish community, which had flourished since at least the 15th century, survives: one active synagogue, a handful of families. And around the corner from one of those ravaged synagogues, there's the Golden Rose.

On the day of our visit, our host and server explained the rules — the menu had no prices; instead, we were encouraged to negotiate for our bill. (If we didn't want to, she said, she would tell us the prices.) I asked her why the gimmick, and she said "for entertainment." She made no mention of what seemed obvious to me — that this was a nod to the stereotype of Jews as cheap and stingy. The shirt she wore — with Hebrew lettering that translated to a Ukrainian saying which means roughly "to be penny-wise, don't be pound-foolish" — seemed another nod in that direction.

Even so, as I explored the restaurant, I began to think that this place wasn't just a mockery. The walls were covered in what seemed to be collage pastiches of random Jewish knickknacks — menorahs, keys with Jewish stars on them, black and white photos in golden frames. I overheard two women speaking Hebrew. One of them, Neili Kazachuk, was Jewish and from Lviv. She explained that the collages were actually detailed stories about the Jewish legacy of the city— one about the Jewish theater, another about the nearby Golden Rose synagogue, from which the restaurant takes its name.

"This restaurant isn't Jewish, but it's a symbol of Judaism," she said. Didn't she find the place odd? I asked. "No, I don't find it odd," she answered. "There are many ways to educate about Judaism and to remind people that Jews were here, and this is one of them." Indeed, just outside the restaurant is a somber and moving memorial about the destroyed synagogues of the city. 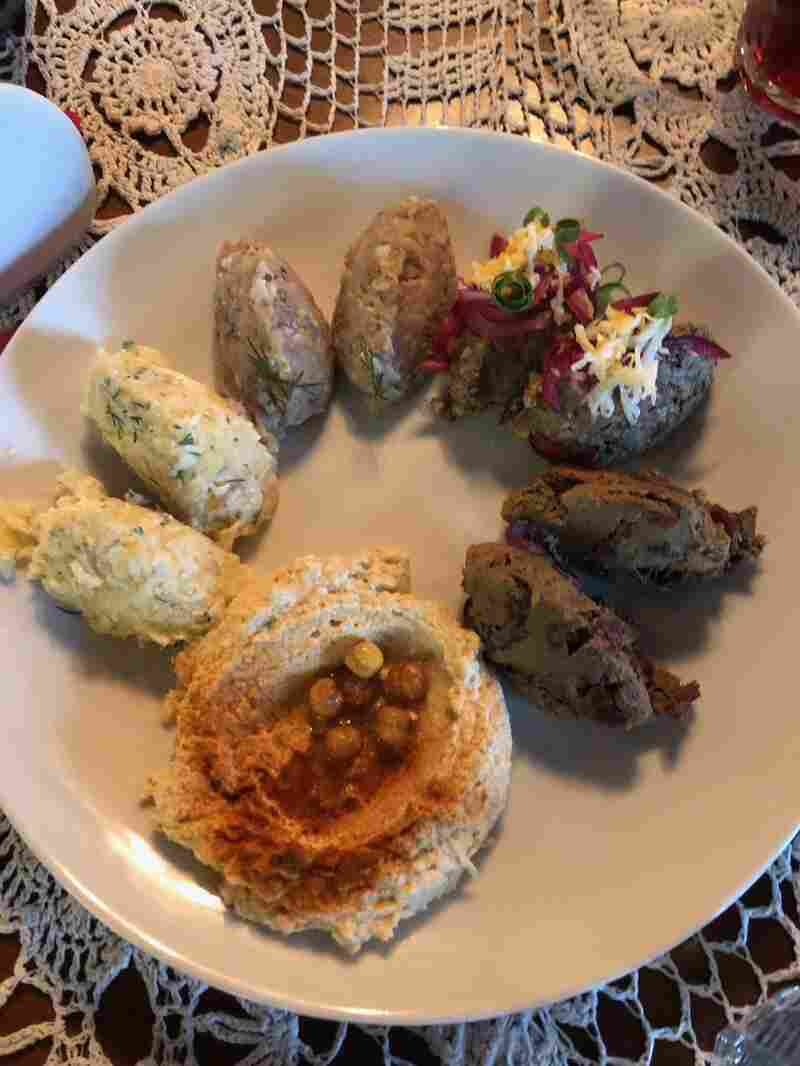 The menu at the Golden Rose is a mix of Israeli and traditionally Jewish foods, including a platter of delicious, although not all kosher, dips. Alex Schmidt hide caption 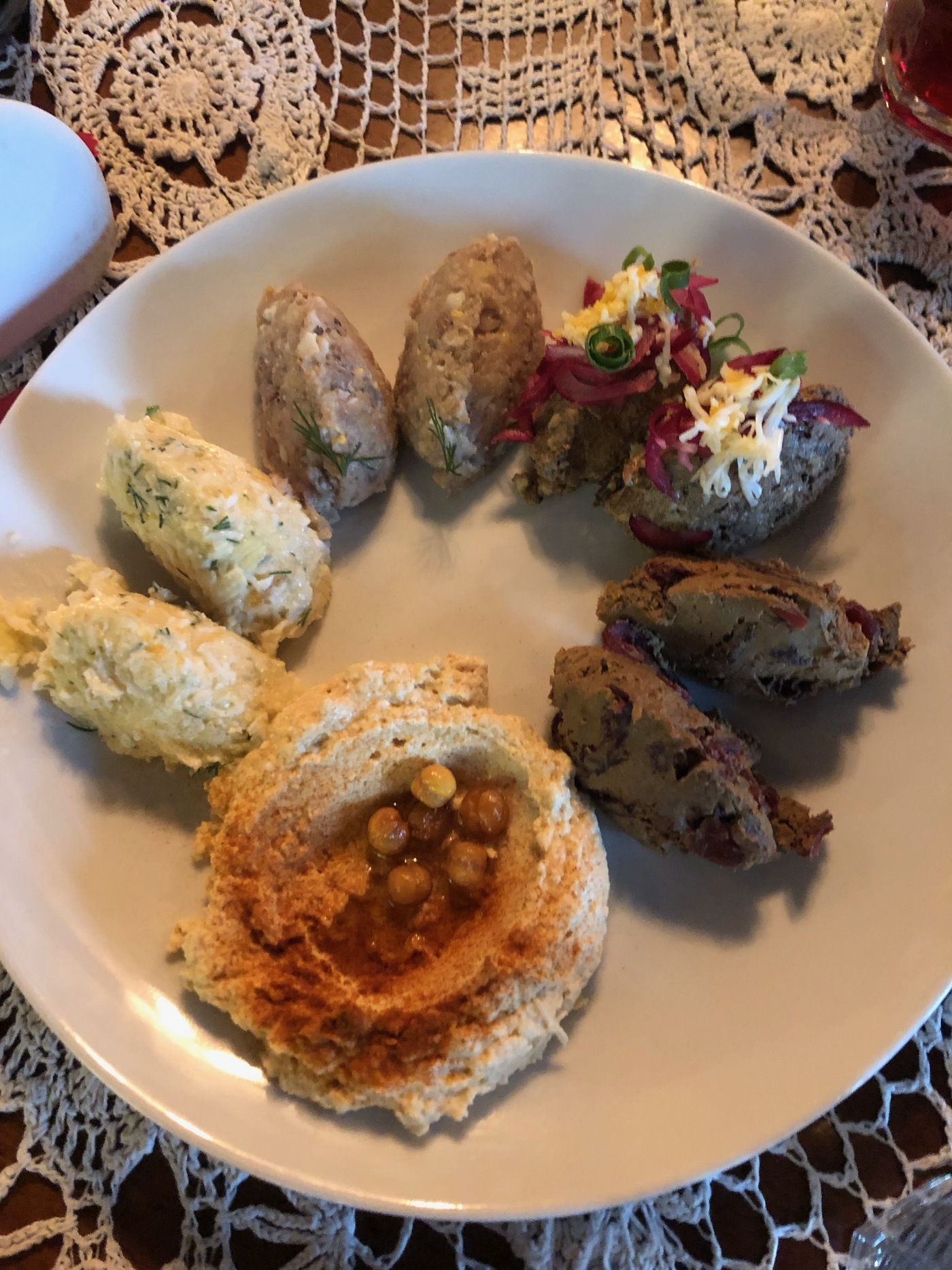 The menu at the Golden Rose is a mix of Israeli and traditionally Jewish foods, including a platter of delicious, although not all kosher, dips.

At the table, we ordered a platter of dips that included hummus, chopped liver, and chopped herring — all of it delicious, though not kosher, so my parents were limited in what they could try. The menu in general was a mix of Israeli and traditionally Jewish foods. Matzo, typically only eaten on Passover, is served here with every meal, which made us chuckle. When I asked the server what it was, she got it mostly right: "It's the Jewish national bread. It's eaten around Easter and it's the only reason the Jews were able to escape Egypt."

When she brought over a bowl for us to wash our hands in — a Jewish ritual before meals — she explained: "Jews put water on their hands three times. If you're Jewish, you can say the special prayer."

This server had done her homework. Her explanations were about right, even if they had twinges of silliness (Jewish national bread?). My sister called the restaurant a "quaint" understanding of what it is to be Jewish: not quite wrong, but also overly narrow, and therefore not completely right either. To my surprise, I didn't find the Golden Rose anti-Semitic, offensive or hurtful. Instead, I found it a touching, if slightly tone-deaf, effort to try to reacquaint people with a now mostly absent minority.

And I felt sadness that this jokey "education" became necessary in such a short period of time. Jews had lived around Lviv for 500 years before World War II and were all but forgotten in about 50. At the same time, I was grateful that people here were interacting at all positively with the idea of Judaism, rather than trying to eradicate it.

Earlier on the trip, I had experienced a detail that felt far less positive: On a Friday evening in Warsaw, a hotel doorman wished my sister "Shabbat Shalom" without having shared another word with her. It was said with no discernible animus — in fact, some might have found it a polite greeting. But the fact that Jews were persecuted here and that we could be identified by a stranger felt ominous. In the U.S., I go through life pretty blissfully, benefiting from white privilege and generally not thinking much about my race or religion.

Now, in an area that had a history of hating people like me and feeling unable to hide, I sensed a visceral, immediate danger that "playing Jewish" at the Golden Rose hadn't come close to. At the restaurant, it was easy to guess what people thought of Jews — that we're stingy and eat matzo and wash our hands a lot. But in the hotel, I had no idea what it meant to be assumed Jewish. Was the doorman's greeting an attempt at politeness? Connection? Or was it something more coded? What did he really think of Jews — of me and my family? There was no way to tell.

I couldn't imagine what it would feel like to live full time in a country with documented hostility toward me and never be able to hide. Would I be on edge all the time? Would I get accustomed to it somehow? In what subtle ways would the fear I felt only momentarily in Poland creep into my subconscious in a place where it was ever-present? Would it affect my mindset, my trust of strangers, my overall sense of joy and peace? I know this is something that visible minorities deal with every day. And I couldn't fathom it.

As much as I had hoped to empathize with other groups, I couldn't "dip a toe" into what it feels like to be an oppressed minority. My little experiment could not reproduce the ways that racism creeps into big and small interactions of everyday life.

In fact, I couldn't even fully empathize with my own mother. I was pretty much unoffended by our experience at the Golden Rose and freaked out by the doorman's comment. She felt nearly the opposite. The "Jews are cheap" insinuations felt mostly harmless to me, but she found them offensive and anti-Semitic.

My mother and I are similar: We have the same race and religion, but we also love a lot of the same music, movies, tequila. And yet somehow, our life experiences meant that we read the same situations completely differently.

In that light, how could I ever hope to have a blanket understanding of any group's lived experience? The answer is, I can't. I can't know what a stranger, or my mother, experiences. But perhaps what matters more is that I believe that her interpretation of events is true and valid. And she believes mine is, too.

Alex Schmidt has published work in outlets including NPR, the Columbia Journalism Review and The Los Angeles Times. She now works as a software product strategist in New York but is a loyal Angeleno at heart.