Accessibility links
How Japanese Americans Campaigned For Reparations—And Won : Code Switch In his new book Redress: The Inside Story of the Successful Campaign for Japanese American Reparations, John Tateishi recounts the fight for justice in the wake of World War II internment camps. 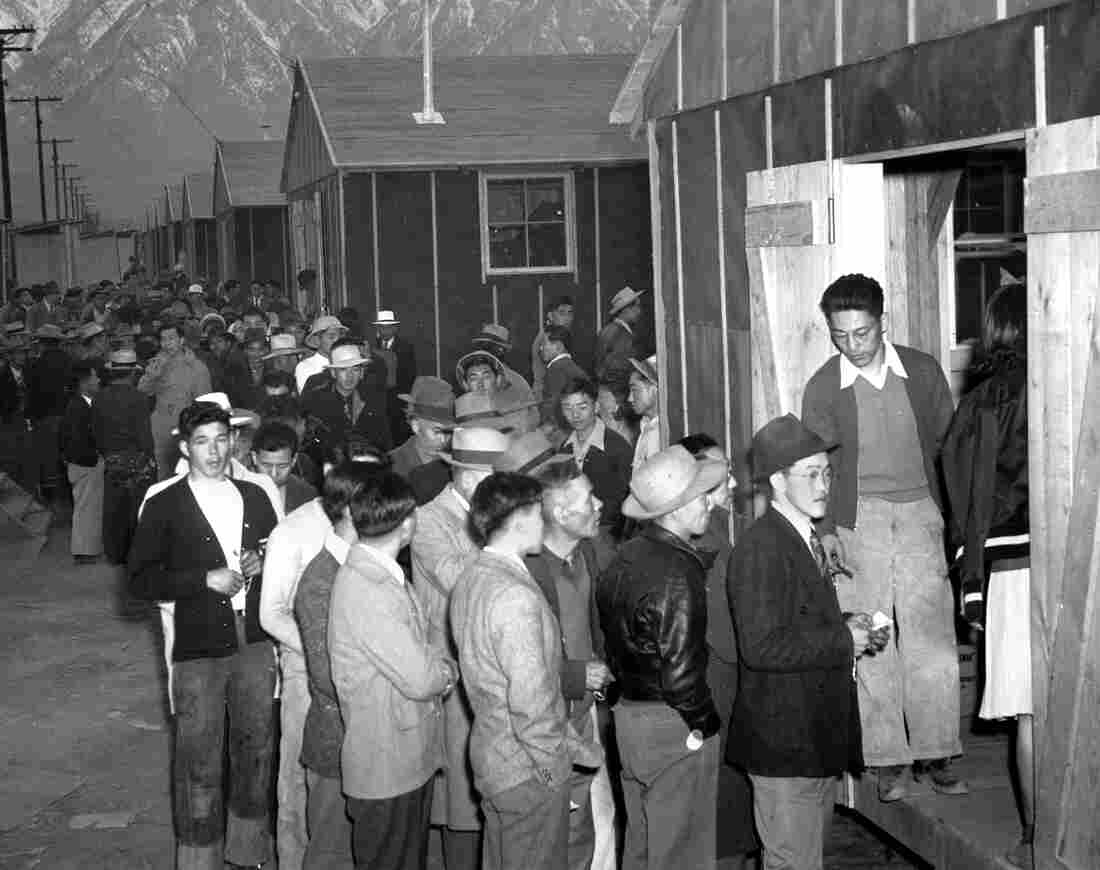 People of Japanese descent wait in line for their assigned homes at an internment camp reception center in Manzanar, Calif., the same camp in which John Tateishi was detained as a child. AP hide caption 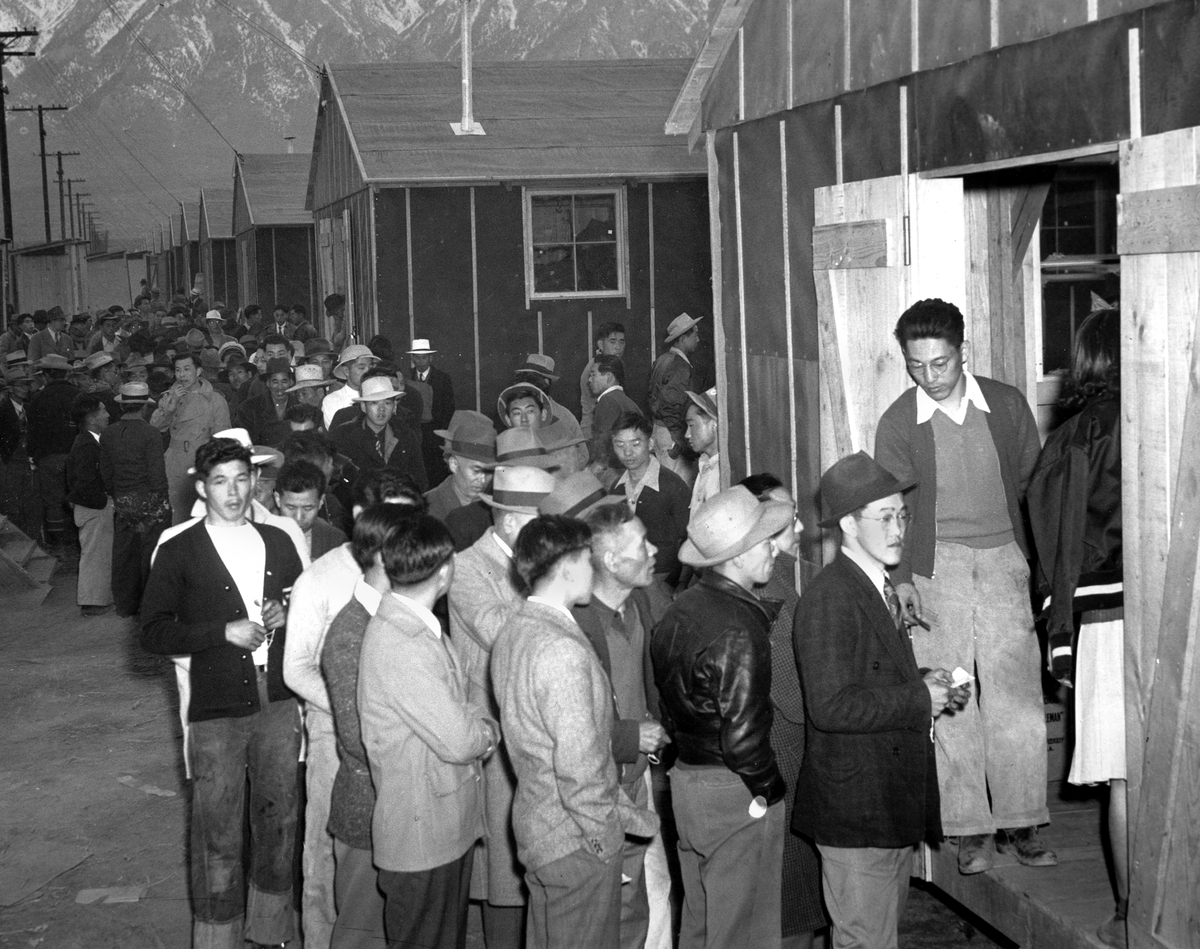 People of Japanese descent wait in line for their assigned homes at an internment camp reception center in Manzanar, Calif., the same camp in which John Tateishi was detained as a child.

The Japanese attack on Pearl Harbor on December 7, 1941 marked the United States' official entrance into World War II. It also pushed the U.S. government's legacy of anti-Asian sentiment to its most extreme.

Just two months later, President Franklin D. Roosevelt signed an executive order that authorized incarcerating people of Japanese descent, based on the widespread suspicion that they were acting as espionage agents. The belief was baseless, but that didn't stop the War Relocation Authority from rounding up more than 100,000 people—two-thirds of whom were U.S. citizens—and detaining them in crowded barracks surrounded by barbed-wire fences.

John Tateishi, now 81, was incarcerated at the Manzanar internment camp in California from ages 3 to 6. After the war ended, Tateishi and his family returned to Los Angeles, where Tateishi says they tried their best to assimilate. Decades later in 1975, he and his wife Carol became founding members of the local Japanese American Citizens' League (JACL). As the civil rights organization's National Redress Director, Tateishi helped lead the eventually successful fight for reparations. 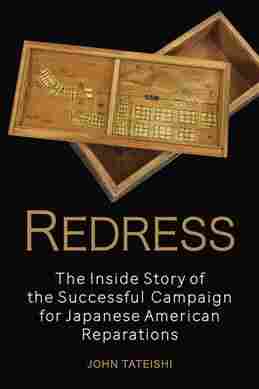 The Inside Story of the Successful Campaign for Japanese American Reparations

The conflict most often occurred between generations: the Nisei generation, who were born between 1910 and 1930 to immigrant parents, and the Sansei, who were either incarcerated at a very young age or born after the war. To process the trauma of the camps, Tateishi writes, the Nisei generation embraced traditional values that encouraged them to put the past behind them; for example, gaman means "to endure or persevere with dignity," and shikataganai translates to "it can't be undone" or "it can't be helped." Their careers and businesses were most upended by internment, Tateishi says, but they were not interested in focusing the JACL's efforts on the "government handout" of reparations.

But their children, the Sansei generation, grew up in the shadow of the Civil Rights Movement. They came to see the internment camps as another form of racial oppression that needed to be spoken out against. By 1978, the JACL's redress campaign was officially launched—even as intergenerational disputes persisted.

Ultimately, the JACL—and the Japanese American community as a whole—came together over a collective obligation to uphold American ideals, Tateishi writes. And finally, in 1988—a decade after the campaign began and over 40 years after the internment camps closed—President Ronald Reagan signed the Civil Liberties Act, which offered a formal apology and paid $20,000 to each survivor.

I spoke with Tateishi about the redress campaign's challenges, educating the public about internment and the implications for other reparations efforts.

The redress campaign happened over 30 years ago. Why did you decide to write this book now?

Even after all these years, there's still a lot of people in the Japanese American community and in the mainstream media who don't quite know what actually happened. So I thought, I'm getting older and this is the point at which I either tell the story publicly now, or let it go for scholars in the future to [interpret for themselves].

There is this view that [in the campaign], there was a kind of campfire kumbaya feeling. But it wasn't like that at all. There was an awful lot of conflict, a lot of disagreements, and a lot of anger.

How did Japanese Americans cope after being released from the internment camps?

The Japanese Zen philosophy is one that seeks harmony in the world. You don't air your grievances, because it makes other people uncomfortable. One metaphor is, a trickle of water coming down the hillside will always take the easiest route. We took that route. There was an enormous wall of silence in the Japanese American community.

What broke this wall of silence?

[During the 1960s and 70s], [the Sansei generation] would learn [about the internment camps] in a college class and go home and ask their parents about it. The parents would just say, "Shikataganai" ("It can't be undone"). But these kids were persistent. They needed to know what the truth was. And so a little at a time, they picked up more information and started going public with it, demanding some acknowledgement that [the internment] had happened.

The voice of young Japanese Americans became codified within the JACL, and the organization adopted the issue of reparations as a priority [in 1978]. But the redress campaign did not begin with very much support among the JACL's elders. Raising their voices in protest was anathema to their cultural values.

And the Nisei generation was very proud of being American—proud enough that after they were stripped of their rights during the war, they volunteered to join the military. They went to Europe and the Pacific and fought for the United States. I mean, my God. You don't do that unless you want to show an extreme sense of loyalty to the U.S. government. When we brought up this issue of reparations, it was so against [that patriotism].

What made the Nisei generation change their minds?

The one thing that resonated for the Nisei generation was the message that this is not about us. This is an issue that is about the Constitution and the future [of this country]. We were determined to pass [the Civil Liberties Act] as a way of having Americans recognize the injustice of what happened to us—not for our sake, but in order to make sure this never happened again. That had enormous consequences in the thinking of the Nisei generation, who was willing to put on the American uniform after having lost all of their rights.

The redress campaign wasn't just about trying to gain monetary compensation. I mean, you figure three years of imprisonment and the 30 years of guilt and shame we lived with, $20,000 wasn't going to abrogate all of that. But the money was part of the message. The American public didn't give a damn until the minute we started demanding compensation.

As a leader of the redress campaign, you spoke on radio programs about Japanese American internment. How did audiences react to learning about what happened in the camps?

There was a huge hostility against us because people assumed that we were guilty of something—that we betrayed the United States, the country of our birth. People would say, "Oh, you're lying. Those camps never existed." Or they would say, "The government did what they did because they had good reason to do it." Because obviously in America, we don't put people in prisons unless they're guilty. Well, we've discovered that's not necessarily true.

It was all based on racism and had nothing to do with fact. And the one thing no one ever could present to me—either officially or people calling into talk shows—was any piece of evidence that would justify what happened to us. The reason they couldn't do that was there was no evidence [that Japanese Americans were guilty of treason].

The day after 9/11, the JACL published a letter warning the U.S. not to racially profile Arab and Muslim Americans. Specifically, you urged Americans "not to make the same mistakes as a nation that were made in the hysteria of WWII following the attack at Pearl Harbor." Why did the JACL anticipate this reaction?

For Japanese Americans, there are certain parallels that were apparent between [the attacks on Pearl Harbor] and 9/11. We were being attacked on our own soil for the second time. There was an enemy who could be identified, and individuals living in this country resembled the terrorists. In our case, the attack was by Japan and we were an ethnic group who resembled the attackers.

I would hear people say things [about Arab and Muslim Americans] that were similar to what I was heard about us. "There is no way we can identify those who are potential terrorists"; "You've seen what terrorists can do, and here are these people who are walking around free. How do we know they're not going to bomb us?"

From our experience, we knew that fear overcomes reason very easily. I don't think there was an American on 9/11 who didn't feel a sense of fear, including those who are Arab and Muslim. But they had to fear something else that other people didn't have to, and that was the wrath of the American public.

What are your thoughts on reparations for slavery?

I don't have any answers. Our situation was very different—we didn't come out of the same historical experience. I can't think of any group that has suffered racism to the degree that black Americans have.

I know that this kind of thing is never just about money, because money often doesn't resolve the problem. It goes much deeper than that. It's the whole issue of racism in America. Until there are efforts made to try to resolve the root causes and to get at the racism, it's going to be a tough battle to move forward. I have no idea how you resolve something so profound, but we have to try. It can't just stagnate there and fester like a wound.

You write that the redress campaign was about "giving real meaning" to U.S. democratic ideals and beliefs. How do you reconcile America's continual sins with its purported values?

We have some great values as Americans. But unless the entire country is willing to stand up for what those values are, they're just words and ideas which can be perverted so easily. As someone who is a minority, and as someone who's fought for upholding the idea of America, I see it as such a fragile process. In a democracy, one has to be vigilant. We have a long way to go in making this the country we like to think we are.