Accessibility links
Author Alex S. Vitale Talks 'The End Of Policing' After Floyd Death : Code Switch For many Americans, it goes without saying that the police help maintain public safety. But many others — especially black Americans — see the police as more of a threat than a protective force. 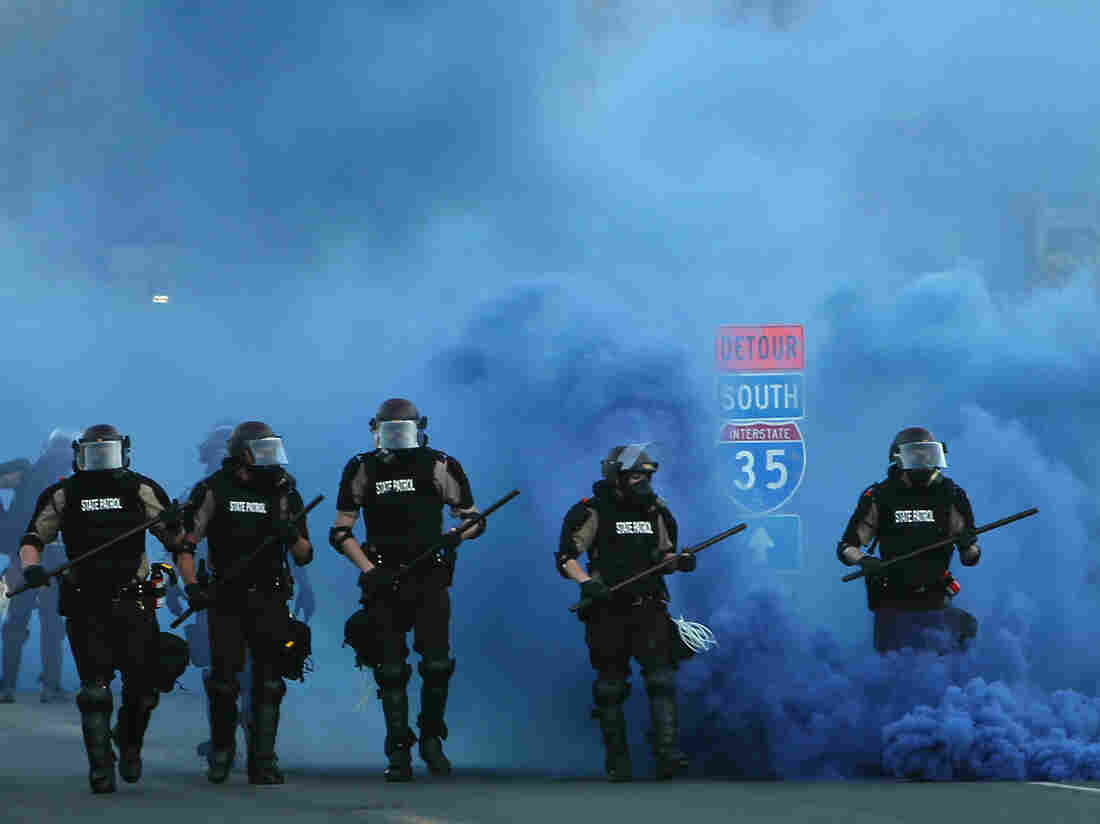 Police advance on demonstrators who are protesting the killing of George Floyd on Saturday in Minneapolis. Scott Olson/Getty Images hide caption 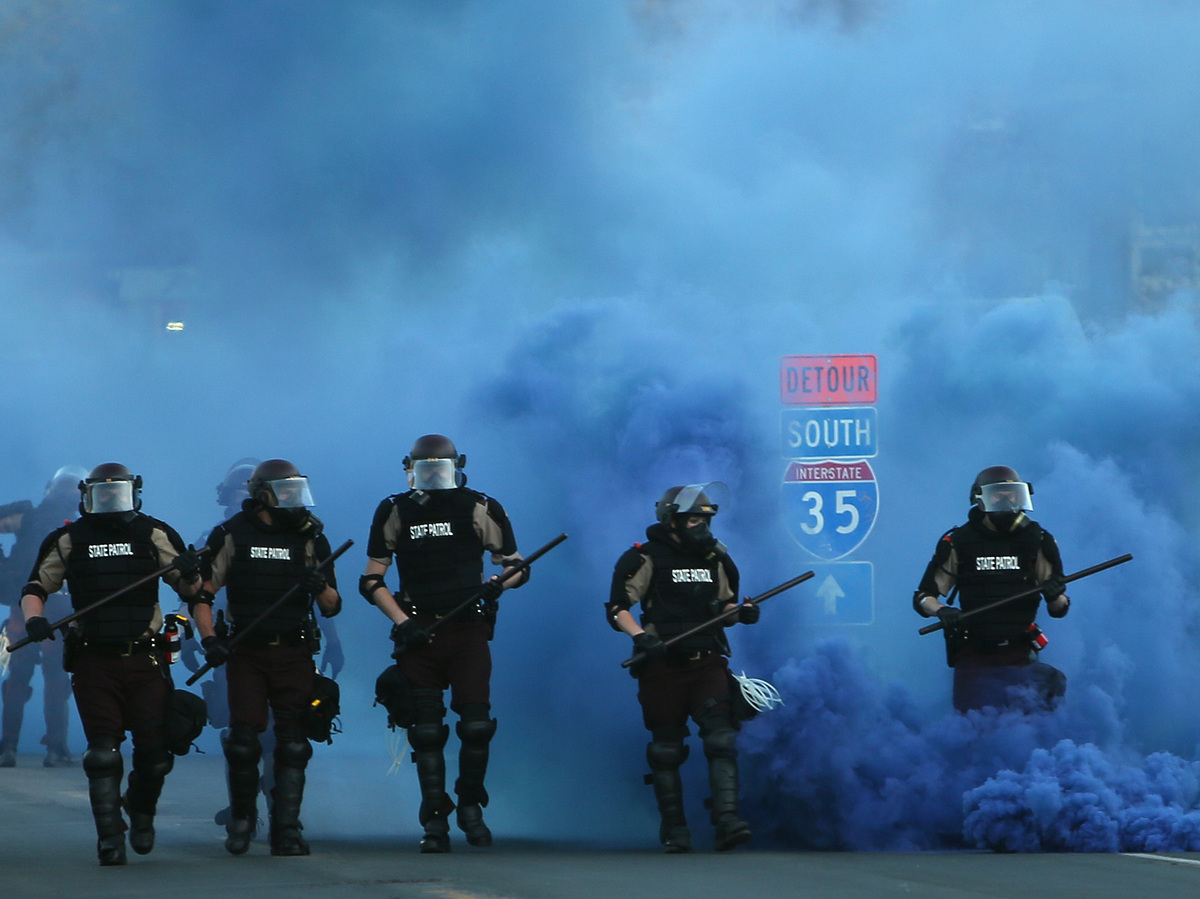 Police advance on demonstrators who are protesting the killing of George Floyd on Saturday in Minneapolis.

One effect of the widespread protests across U.S. cities this week has been to renew discussions of what role the police should play in society.

For many Americans, it goes without saying that the police are critical in maintaining public safety. Have an emergency? Call the police. But many others — especially black people and poor people — have long countered that the police pose more of a threat to their safety than a boon. See a police officer? Walk in the other direction.

So it seems like a good moment to talk to Alex S. Vitale. He's the author of the 2017 book The End of Policing. In it, he argues that rather than focus on police reform or officer retraining, the country needs to reconsider fundamentally what it is the police should be doing at all.

I spoke with Vitale about what roles police should and shouldn't play, what he makes of the current protests and what actual change in the way police in this country do their jobs might look like. Our conversation has been edited and condensed for clarity.

One of the arguments you make in The End of Policing is that police are being asked to do too much. They're basically being tasked with addressing every social problem that we have. So what are police asked to do? And what should they be asked to do?

One of the problems that we're encountering here is this massive expansion in the scope of policing over the last 40 years or so. Policing is now happening in our schools. It's happening in relation to the problems of homelessness, untreated mental illness, youth violence and some things that we historically associate police with. 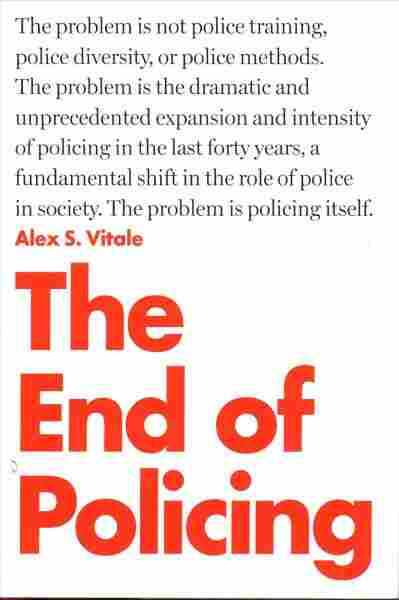 The End of Policing

But the policing has become more intensive, more invasive, more aggressive. So what I'm calling for is a rethink on why we've turned all of these social problems over to the police to manage. And as we dial those things back, then we can think more concretely about what the rest of policing should look like and how that could be reformed.

You brought up homelessness. In many cities police are tasked with dealing with people experiencing homelessness — but they don't have many options besides basically moving people or arresting them.

Well, we've created this situation where our political leaders have basically abandoned the possibility of actually housing people. Which, of course, is the real solution, supportive housing for those who need extra support. But basically, we have a massive failure in housing markets that is unable to provide basic shelter for millions of Americans.

So instead of actually addressing that fundamental problem, we have relabeled it as a problem that is the fault of the disorderly people who we label as morally deficient. And then we use police to criminalize them, to control their behavior and to reduce their disorderly impact on the rest of us. And this is perverse and unjust. So then it places police in this completely untenable situation, because they completely lack the tools to make this problem any better. And yet we've told them it's their problem to manage. ...

Part of our misunderstanding about the nature of policing is we keep imagining that we can turn police into social workers. That we can make them nice, friendly community outreach workers. But police are violence workers. That's what distinguishes them from all other government functions. ... They have the legal capacity to use violence in situations where the average citizen would be arrested.

So when we turn a problem over to the police to manage, there will be violence, because those are ultimately the tools that they are most equipped to utilize: handcuffs, threats, guns, arrests. That's what really is at the root of policing. So if we don't want violence, we should try to figure out how to not get the police involved.

There are obviously a lot of people who agree broadly with the notion that the way that policing happens in this country is a problem and that there needs to be some sort of change. But they're pretty invested in the idea that police are needed to maintain public safety. People ask the question, without police, what do you do when someone gets murdered? What do you do when someone's house gets robbed? What do you say to those people who have those concerns?

Well, I'm certainly not talking about any kind of scenario where tomorrow someone just flips a switch and there are no police. What I'm talking about is the systematic questioning of the specific roles that police currently undertake, and attempting to develop evidence-based alternatives so that we can dial back our reliance on them. And my feeling is that this encompasses actually the vast majority of what police do. We have better alternatives for them.

Even if you take something like burglary — a huge amount of burglary activity is driven by drug use. And we need to completely rethink our approach to drugs so that property crime isn't the primary way that people access drugs. We don't have any part of this country that has high-quality medical drug treatment on demand. But we have policing on demand everywhere. And it's not working.

Obviously, a big part of what is on people's minds right now is the role that police have in dealing with protesters, dealing with different types of political unrest. In your book, you talk a lot about the history of how police have been used to quell social unrest. Can you talk about that history a little bit?

Well, I think that one of the myths we have about policing is that it is politically neutral, and that it is always here to sort of create order in a way that benefits everyone. But the reality is that America's social order has never been entirely equitable. We have a long history of exploitation of the Indigenous population, of African Americans through slavery, Jim Crow and today.

And while we're not using police to manage slavery or colonialism today, we are using police to manage the problems that our very unequal system has produced. We're invested in this kind of austerity politics that says the government can't afford to really do anything to lift people up. We have to put all our resources into subsidizing the already most successful parts of the economy. But those parts of the economy are producing this huge group of people who are homeless, unemployed, have untreated mental health and substance abuse problems. And then we ask the police to put a lid on those problems — to manage them so they don't interfere with the "order" that we're supposedly all benefiting from.

But if you're one of those poor people, one of those folks with a mental health problem, someone who's involved in black market activities to survive, then you experience this as constant criminalization.

And would you say the same goes for people who are political protesters?

Political protest has always been a part of this dynamic, right? Political protests are a threat to the order of this system. And so policing has always been the primary tool for managing those threats to the public order. Just as we understand the use of police to deal with homelessness as a political failure, every time we turn a political order problem over to the police to manage, that's also a political failure. I think the mayor of Minneapolis, for instance: Jacob Frey. He has consistently tried to frame this as a problem of a few bad apples. And he says, "Why are you protesting? We fired them." But this completely misunderstands the nature of the grievances. And instead of actually addressing those grievances, he's throwing police at the problem.

Are the interactions that are happening right now between police and protesters something that you think is predictable? Or is this something new that we haven't seen before?

It's not completely new; it's just the intensity of it compared [with], let's say, five years ago during the Eric Garner and the Mike Brown protests. What we're seeing is really an immediate escalation to very high levels of force, a high degree of confrontation.

And I think part of it is driven by deep frustration within policing, which is that police feel under assault, and they have no answer. They trotted out all the possible solutions: police-community dialogue sessions, implicit bias training, community policing, body cameras. And it just didn't work. It didn't make any difference. And so they ran out of excuses.

So the protests today are a much more kind of existential threat to the police. And the police are overreacting as a result.

If we were to take serious steps toward moving in the direction of having police address fewer of our social problems and putting those problems in the hands of people who are actually more equipped to deal with them, what would be the next step? What is the next thing that we as a country have to push for?

I think this will look like a series of local budget battles. And that's really what's going on across the country, is when we have these divest campaigns in places like Los Angeles and Minneapolis and New York and Durham, N.C., and Nashville, Tenn., and Dallas, Texas. These are folks who are saying concretely: "We don't want police in our schools. We want that money spent in ways that help our children, not criminalize them. We don't want more money for overtime for narcotics officers. We want actual drug treatment programs, safe injection facilities, things that will help people." So that's what this looks like. It's about rallying city council members and mayors around a new vision of creating healthier communities.

When you're looking around at what's happening right now, what are the things that you think people need to understand to really process what is going on around the country?

Well, I think the police are making the argument for us, right? People started this conversation by saying policing is out of control; they're not making the situation better. They have not been reformed. Well, now all you have to do is turn on the nightly news and see how true that is.

The level of aggression and unnecessary escalation is stark evidence of how unreformed policing is, and I argue how unreformable it is. The question is whether or not people will take it to the next step and ask the tough political questions. Why are our mayors turning this over to the police to manage? Why are we using curfews instead of having conversations? Why are we throwing protesters in prison instead of trying to figure out what's driving all of this anger?