Accessibility links
'Latinx' Hasn't Caught On Among Adults, Pew Research Finds : Code Switch New research shows "Latinx" hasn't really caught on among U.S. adults in that heritage group: While one in four have heard of the term, only 3% use it. 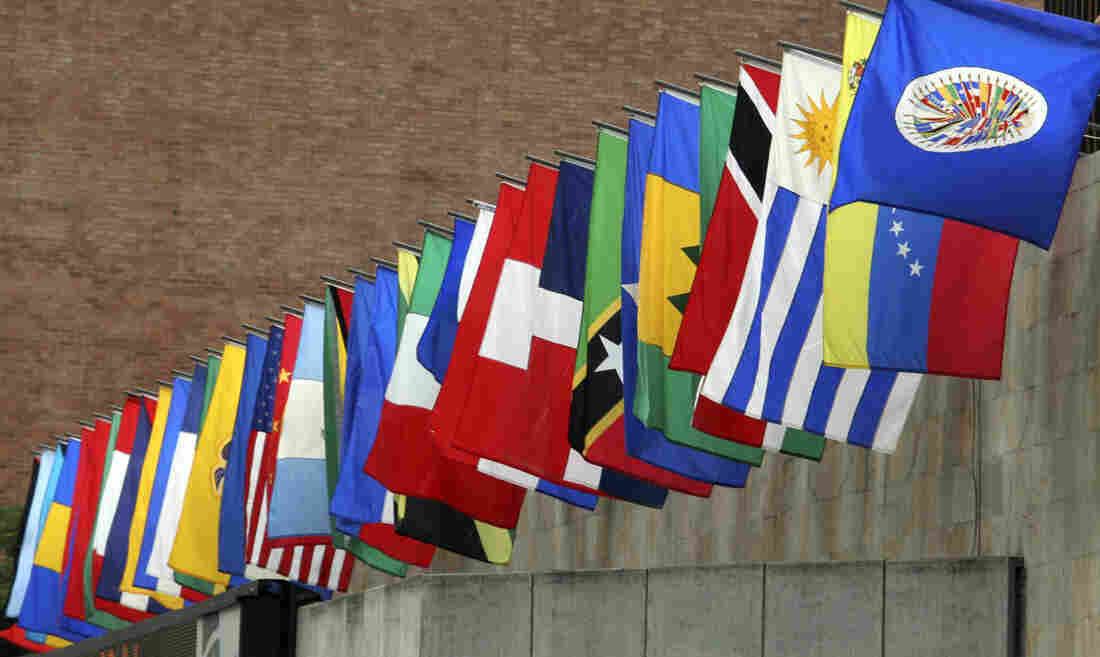 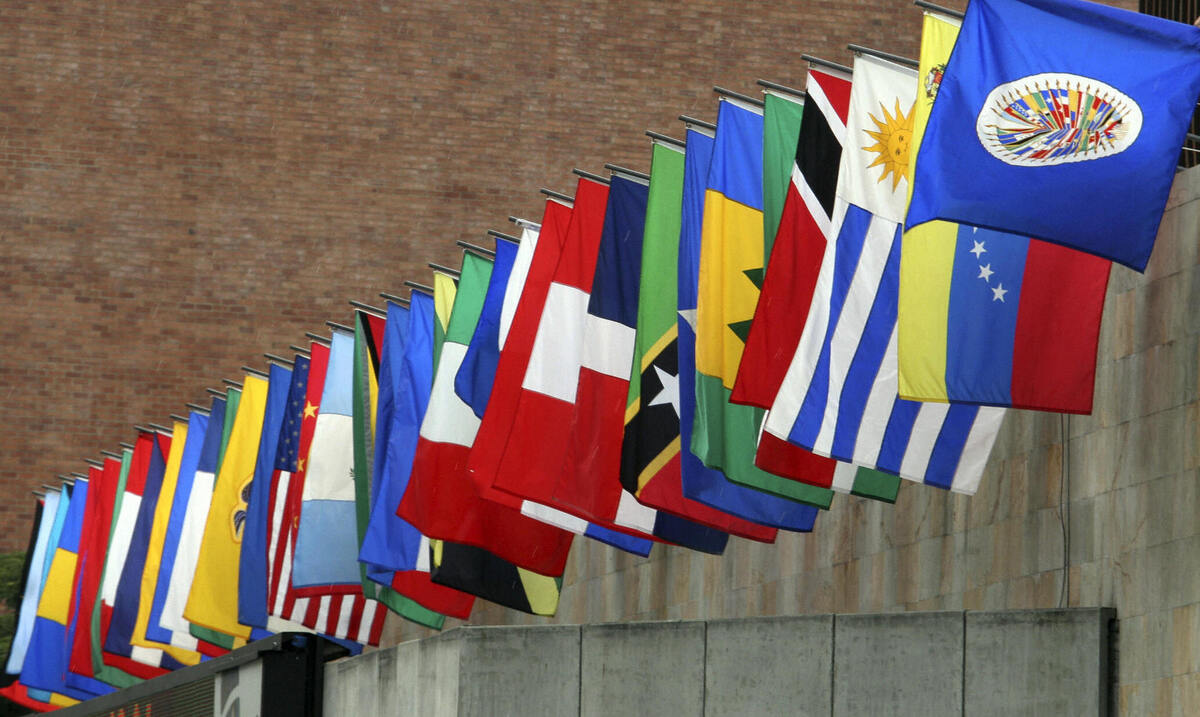 The flags of the Organization of American States (OAS)

We've been using the term "Latinx" on NPR's Code Switch podcast regularly. But new research shows it hasn't really caught on among Latino adults in the U.S.: While one in four have heard of the term, only 3% use it.

The Pew Research Center's national survey of Latinos queried more than 3,000 respondents about the term Latinx, and I spoke with their director of global migration and demography research, Mark Hugo Lopez, about their findings. Our conversation has been condensed and edited for clarity.

In Pew's latest survey of Latinx adults living in the United States, you found that only three percent self-identify as Latinx. What's being used instead? 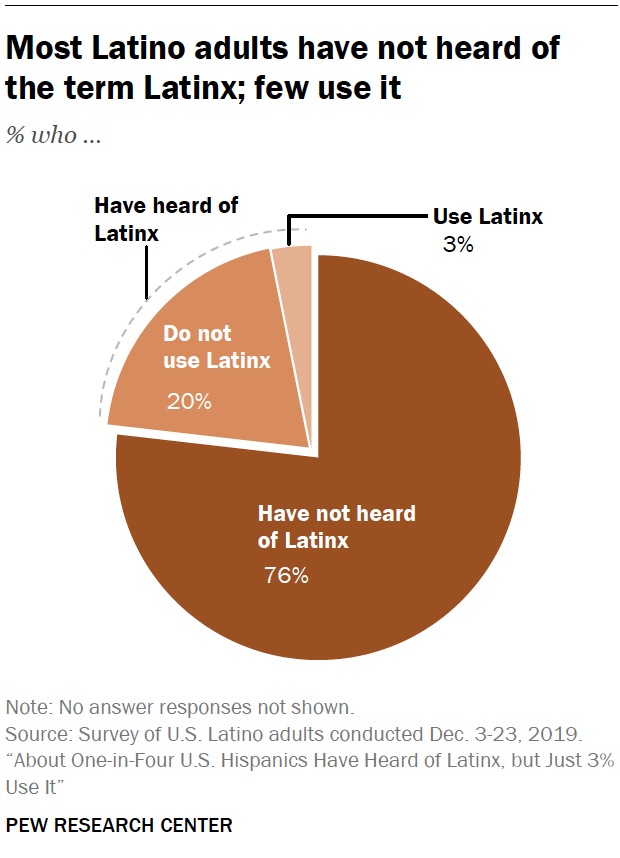 What we found is that "Hispanic" is preferred by far. Then, Latino, and finally, as you noted, a very small share say that they prefer Latinx. But there's another important finding in the report, which is about awareness of the term. Latinx is a relatively new umbrella term on the scene. It's been around for about 20 years, but it's only recently — in the last five or six years— really begun to be used widely in the news media, in pop culture and by corporations. Universities have been using it for a while, but only about a quarter of people in this population say they've actually heard the term. So the term is relatively unknown to the population it's meant to describe.

You say it's been around for 20 years. That's longer than I thought. Where did it originate?

There's actually been Google searches all the way back to 2004, the beginning of Google Trends' search data. However, in the '90s, there were a lot of changes at universities. For example - Chicano studies programs were renamed Chicana/o studies, to better represent the experiences of both men and women, to be gender inclusive.

As people were searching for a way to be inclusive, Latinx emerged sometime in the late' 90s. That's the earliest reference that I found as we were doing this study. But it did start to rise in use, especially after the Pulse nightclub shooting. Latinx is a term that is gender inclusive and inclusive of LGBT adults. That's where you started to see it in headlines and in news coverage. And that may have led to more Google searches. There have been other events, like when Elizabeth Warren used it. But we saw the highest level of searches in June of 2020, more than we've ever seen relative to the past, so we're actually at a high point right now. But just because there are more Google searches, that doesn't mean that's the term people want to use to describe themselves.

So, who are the 3% your survey says self-identify as Latinx?

It is young people, people ages 18 to 29 who are most likely to be aware of the term. Forty-two percent of them, for example, say that they've heard the term Latinx. Interestingly, only seven percent of that group actually use the term to describe themselves. Another group that uses it more than others are college-educated people. U.S.-born English speakers are also more likely to use it. 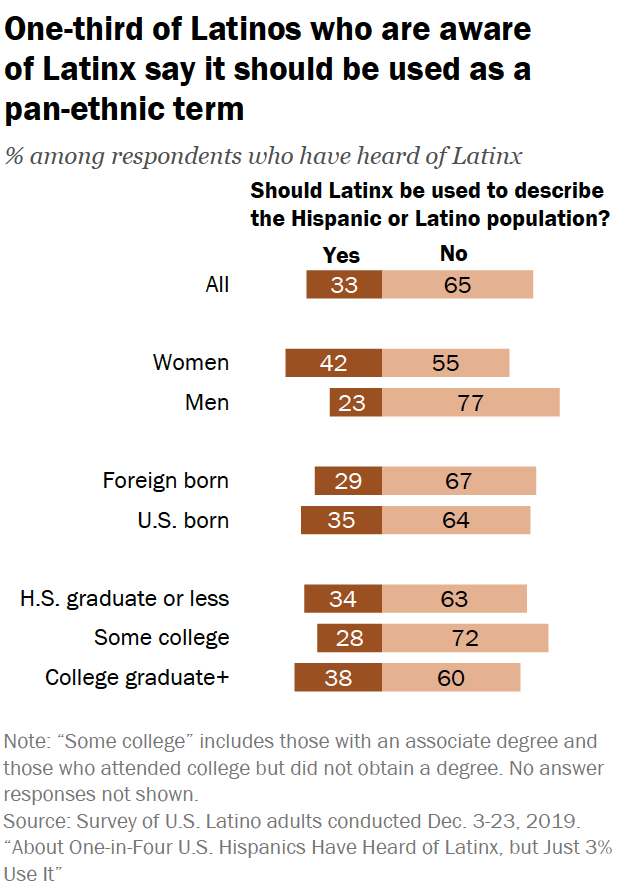 And interestingly, the one group that uses it the most is young Hispanic women ages 18 to 29. About 14 percent of Hispanic women say that they use the term to describe themselves. That's almost one in seven people, and that's one of the highest shares of use that we see among the data that we collected.

We've done stories on the Code Switch podcast about the birth of the pan-ethnic label to refer to people in the U.S. who trace their roots to Latin America. And we know how hard-won those labels were, whether it's Hispanic or Latino. But, based on your research, people would still rather identify based on country of origin, not based on these broad umbrella terms.

Who Put The 'Hispanic' In Hispanic Heritage Month?

That's right. We found over the years, over 15 years of surveys, that when it comes to the labels that people want to use to describe themselves, more often than not, they prefer their country of origin. That's true particularly of immigrants, but it's also true even of U.S.-born Hispanics or Latinos who are the children of U.S.-born parents. Into the third generation, oftentimes the most common term used references the country of origin, like Mexican, Dominican, Cuban or Puerto Rican. And that's something that's been pretty strong over the years.

In your research over the last two decades, specifically on this issue, do you feel like the adoption of pan-ethnic labels is becoming more popular?

That's a really great question, because there are a number of demographic trends underway that are impacting the way in which this population that we're talking about sees itself. About a quarter of all newlyweds who are Latino have a spouse who's non-Latino. And that's been true for about 30 years. But, an inflow of new immigrants during the 1980s, '90s and into the 2000s softened the impact of that of intermarriage in terms of identity. But now it's US births that are the biggest source of growth of the Latino population.

So what happens to the identity and self-identifying with this group over the course of several decades with high rates of intermarriage and without a new inflow of immigrants? What would that mean for this population in terms of how they identify?

What pan-ethnic label do you use? I heard you say Hispanic and Latino a lot.

The Pew Research Center uses them interchangeably in our reports, as does the U.S. Census Bureau. For me personally, it varies depending on where I'm at, because it does matter who asks. For example, I might say I'm Hispanic in a certain part of the country. I'm here in Southern California right now, here I tend to use Chicano, because my dad had been in the Chicano movement in the '60s and '70s locally, and so it was important to identify as such. And when I travel abroad, for example, I might actually say that I'm American because most people in Europe, for example, may not be aware of the distinctions between Hispanic, Latino, etc. And if I am in other parts of the country, I might use Latino. It depends how I feel that day. I think that's really important here, what people use can change depending on the circumstances, who's asking and how and where they are.