Accessibility links
Looking For A Scary Pandemic Read? 'Mexican Gothic' Is A Good Place To Start : Code Switch This week, Code Switch is talking about the books that are getting us through the pandemic. Today's conversation is with Silvia Moreno-Garcia, author of the creepy and engrossing Mexican Gothic. 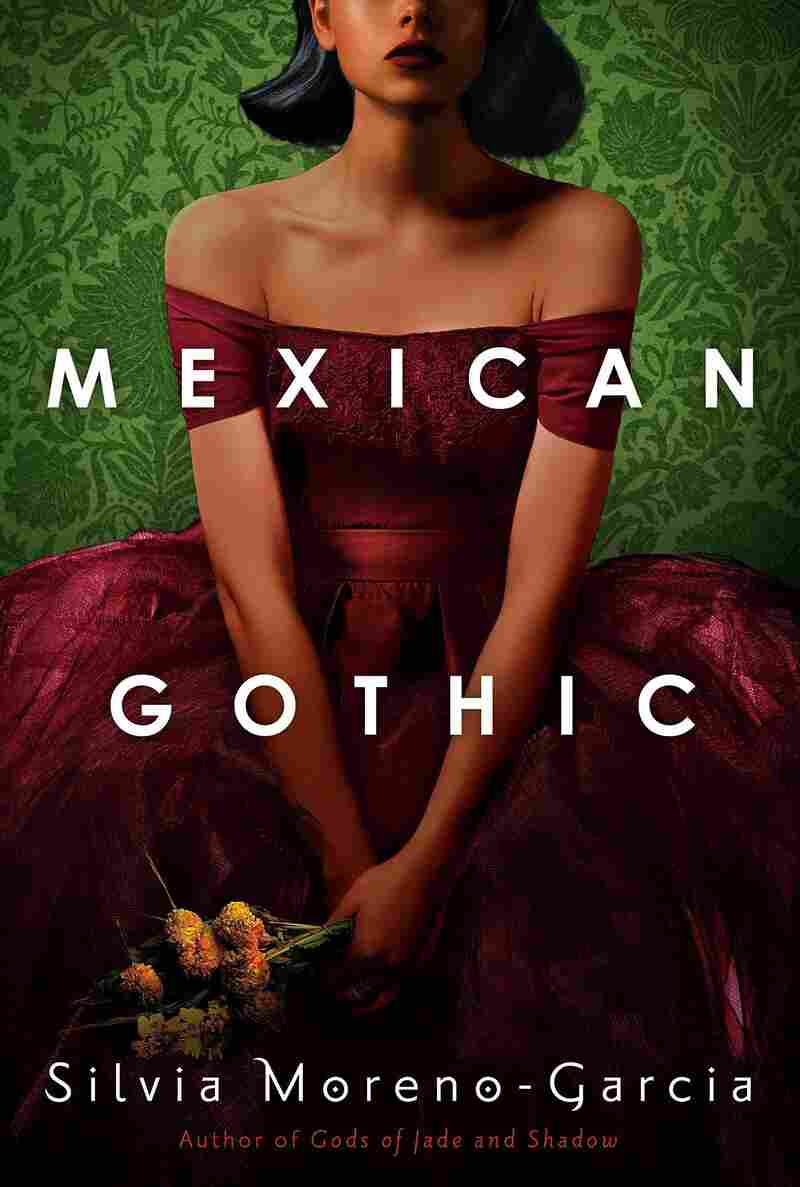 This week on the Code Switch podcast, we tried to settle a months-long debate we've been having on the team: Which kind of books are best to read during the pandemic? Ones that help you escape our current reality? Or ones that connect you to it on a deeper level? In doing so, we got a chance to catch up with the authors of some of our favorite pandemic reads. We'll be sharing interviews with those authors throughout the week. First up, we have a conversation with Silvia Moreno-Garcia, author of Mexican Gothic.

I read Mexican Gothic on a Saturday night this summer, curled up on my couch with a cider and a tray of cookies. (Prior to starting, I had been warned that I would not be able to stop reading until I finished the book. That turned out to be true. I was also warned by NPR books editor Petra Mayer that I would never look at mushrooms the same way. Unfortunately, that also turned out to be accurate.)

Set in 1950s Mexico, Mexican Gothic is the story of Noemí, a young woman who gets summoned to a small mountain mining town to check up on her ailing cousin, who has recently been married off to a handsome and mysterious Englishman. What happens next is pretty typical of Gothic literature: girl arrives at creepy isolated mansion, girl realizes the vibes are way off, girl devises a plan to GTFO.

But Mexican Gothic enters some new territory. The town Noemí arrives in has been colonized by the aforementioned British family. So Noemí's escape plan includes a reckoning not just with a handful of sinister individuals, but with the forces of race, empire and colonialism.

I spoke to Silvia Moreno-Garcia about her book. Our conversation has been edited and condensed for clarity.

Tell us about the main character, Noemí. What is she like?

Noemí Taboada is a socialite from Mexico City. She is very intelligent and well educated. She is going to university and wants to pursue a master's degree, but her family has been reluctant to allow it. One reason why she decides to go to the mountains to take a look at her cousin is because she's promised the opportunity of going to university to continue her studies if she does that, as a sort of exchange. So she's smart and she's determined. She's also a bit flighty. She likes dancing and parties and pretty boys and having fun. She's a very modern 1950s girl.

Most classic Gothic novels take place in Europe, with a few exceptions. Why did you decide to set this in Mexico, and what does that do to alter the genre?

The direct inspiration for this novel was a real town in Mexico that is located in kind of the middle part of the country in the mountains. It's called Real del Monte or Mineral del Monte. It was mined by the Spanish first, and then in the 1800s, the British came and they started mining there. And that's how it earned its nickname of "Little Cornwall."

It has an English cemetery, just like in my book. And that is what inspired the novel. I went there one time and I was walking around the cemetery and it was misty. And it's kind of chilly and rainy there, especially certain times of the year. And I looked around and I thought, this is something out of a Hammer film. So it never really quite left me.

But the other reason to set it there is because, I think when people think about Mexico, sometimes they do know that it was conquered by the Spanish. And they think the Spanish left and that was it. That was the only case of colonialism that existed. But obviously, many other forces came into Mexico throughout the years and engaged in explicit warfare or more subtle types of control. So the French were there. We had a brief French empire in Mexico. The British were there, as I mentioned, in Real del Monte, but also in the South, trying to gain some kind of control in Yucatan. Americans came and all sorts of foreign interventions have taken place throughout the history of Mexico. And I just thought it was an interesting bit of the colonial legacy, to look at the British legacy, and to set it in Mexico to examine some of those forces colliding.

Many Gothic novels have elements of fear or supernatural or horror. In this book, one of the things that adds to that horror is that the patriarch in the family is a eugenicist and a colonizer. Can you talk about that?

My master's degree was in science and technology studies, and my thesis was actually on eugenics, women and the work of H.P. Lovecraft. So I know a lot about eugenics. So one of the easy answers is because I knew a lot about it.

But the reason why I became interested in eugenics was because there was a widespread scientific movement at the time. People took it very seriously. Eugenics was found in textbooks. You would see it in women's magazines, like the equivalent of seeing it in Cosmo nowadays, or Good Housekeeping. Obviously, scientists were discussing it. So it was appearing in science journals, but it also made its way into common parlance, made its way into laws and regulations, you know, deciding things like sterilization, but also immigration.

And it was exported. It started in England, but it was widely adopted in other countries. Obviously in the United States, which was one of the places where sterilization laws really seemed to flower in certain states. You know, people were not allowed to have children; were sterilized against their will. But it also spread into other parts, and manifested in many different ways.

And obviously, when you come to places like Mexico and other states that were colonized, that question of race becomes very interesting because there's obviously a lot of race-mixing going on in these nations. And so it's not the same sort of eugenics that they're handling in Great Britain, where there is this great anxiety about miscegenation. It's a little bit different. It's still highly racist, but it's not exactly the same kind of thought process that is going on. And I just always found it so interesting how Europeans view the colonies as a space of fear, because it is that space where people are coming together and mixing.

But, without giving too much away, part of the dynamic in the book is also that these people who have protected their whiteness for so long need Noemi, in part because she doesn't share their same genes.

Well, I think one of the things that happens with women of color, both in literary spaces and in real life, is that even though there is a certain sense of objection, of disgust to the brown body, there is also a sense of desire, and of using the brown body in any way that whiteness sees fit. So for example, with sex tourism you see that a lot, where women's bodies become cheap commodities that white men can acquire very easily. And in my interactions with people, when I was younger I've seen that in my contact sometimes with white men, I became an object of exotic pursuit. And the implications of that were that because I was Latina, I was easy. An easy sexual conquest. And available in a way that white women would not be.

On Code Switch we talk a lot about the importance of language. One of the things I found interesting about this book was how important language becomes. The patriarch of the family that's terrorizing Noemie doesn't speak Spanish — which means that she's able to use Spanish to her advantage. How did you think about that?

Sometimes people say, well, it's unrealistic that they didn't learn Spanish, these colonizers. And let me tell you — it's not unrealistic, right?

When I was growing up and living in Mexico, at one point I worked for an English language newspaper. And we had an English language newspaper precisely because there was an audience that could consume it and basically didn't know a word of Spanish. And I would sometimes, you know, meet people that would be like, "Oh, well, you know, I've lived in the country for 10 years. I haven't learned, you know, any Spanish at all." So that was not unrealistic.

But in this case specifically, it is also a desire to maintain a certain kind of purity. It's not only a racial purity — it's a whole kind of white purity, with the house looking specifically the way it does in order to maintain a certain structure. They bring British earth, so they can grow things that they grew over there basically. And the mimicking of all of these social customs is for a reason. That's why they are old-fashioned. It's because [the patriarch] Howard Doyle is clinging to a kind of idealized past.

What book have you loved reading during this pandemic?

Oh, that's such a hard question. Well, for scary books, I read The Only Good Indians by Stephen Graham Jones. I recommend that one a lot, because it has the classic 1980s horror feel. So if you liked Stephen King's It or Peter Straub's Ghost Story, you will definitely like it. But it has a twist. It feels fresh. So sometimes people are like, well, they don't make them like they used to. And this definitely is "like they used to." But it will also, I think, surprise you and do something new.

Readers, we want to hear from you! What books are you turning to right now? Are you team #EscapistReads or team #PandemicReads? Email us at CodeSwitch@npr.org and tell us your thoughts. And stay tuned tomorrow, for another Q&A with one of our favorite authors.