Accessibility links
What It's Like To Lose Your Mother To Alzheimer's During COVID : Code Switch Since 2016, journalist Yvonne Latty has been documenting her mother's journey with Alzheimer's. As part of a collaboration with Latino USA and Black Public Media, she brings us this intimate portrait. 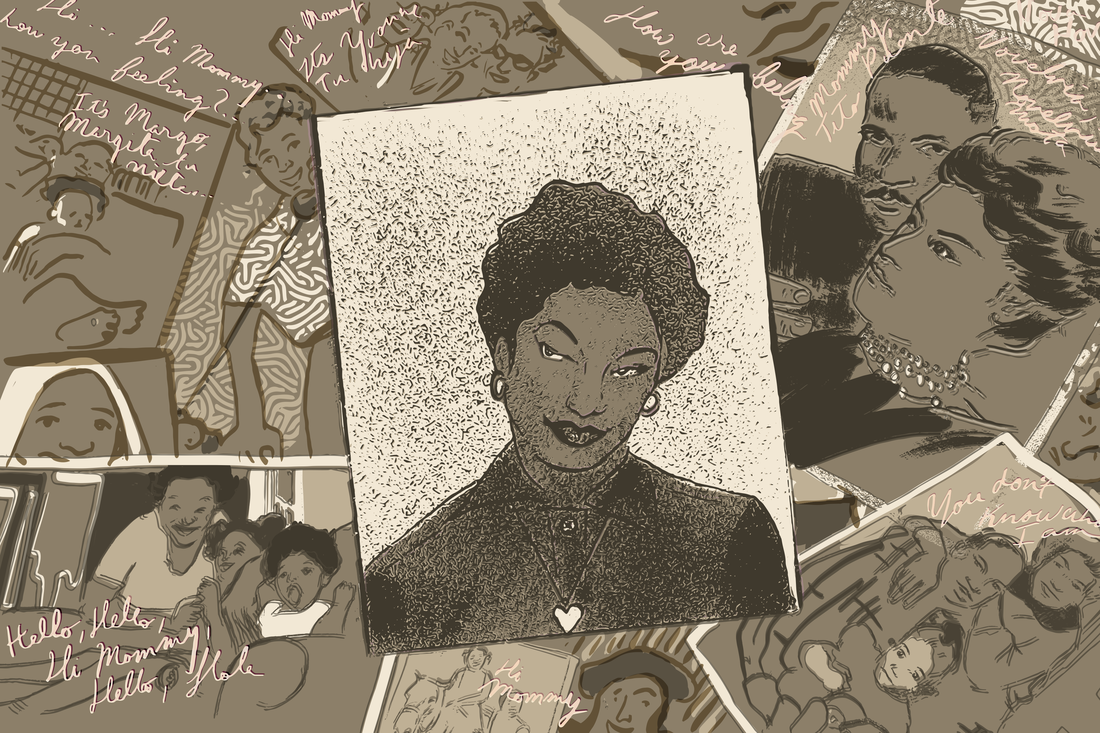 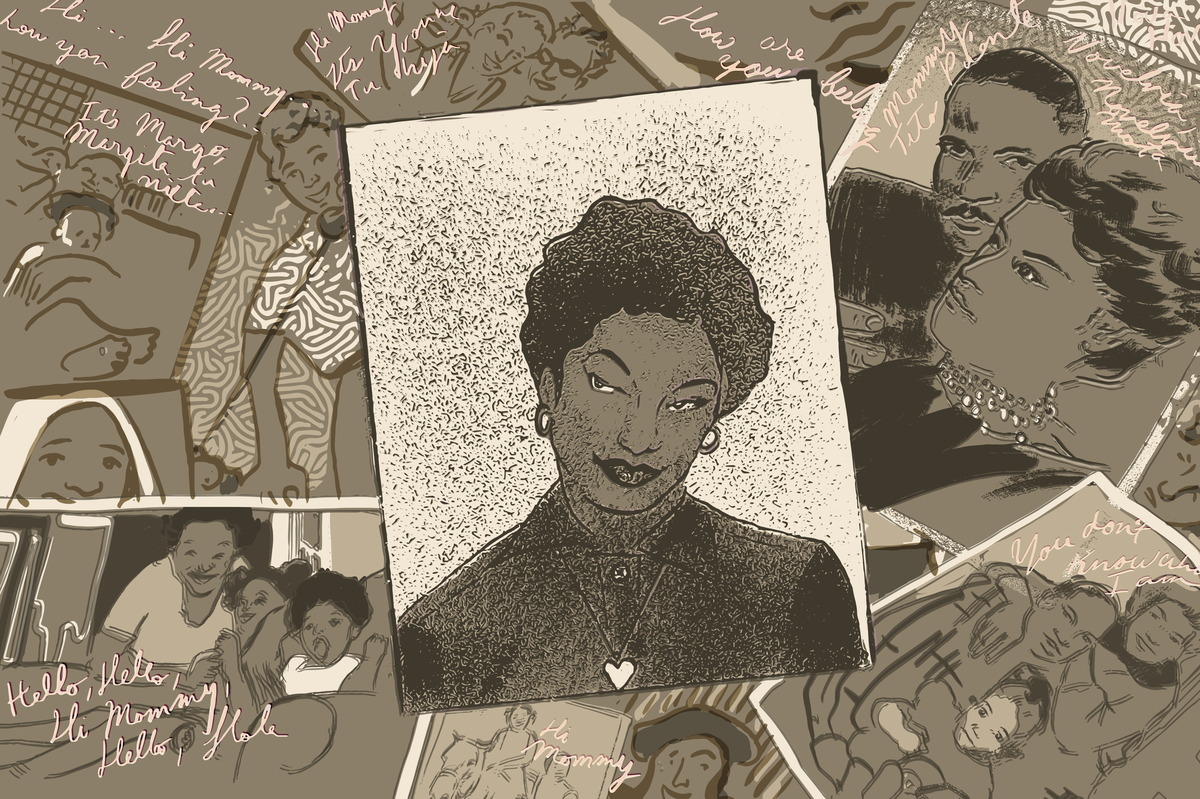 My 87-year-old mom has Alzheimer's disease in the midst of COVID-19. Right now, that means I can only see her when her Bronx nursing home connects us on Skype. Our Internet connection is sound, but mentally, she is in the grips of this disease. All she can do is just look at me for a few minutes at a time, as I try to get her to remember me. 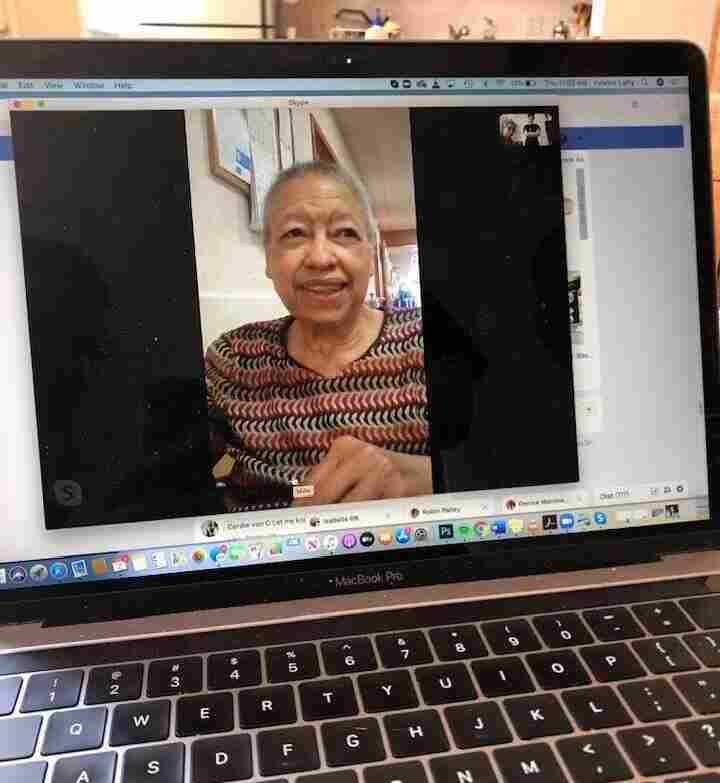 Ramona Latty, talking to her daughter Yvonne over Skype from her nursing home at the beginning of the pandemic. Courtesy of Yvonne Latty hide caption

If I am lucky, she will giggle or speak in gibberish. But lately, there's mostly nothing. She has no idea who I am, what day it is, where she is or who she is. She can't speak or walk or feed herself. She spends her days in bed or in a wheelchair, sitting in the hallway across from other residents. The music group, art classes, bingo and most of the other activities that she once loved have been canceled due to COVID-19.

For Most States, At Least A Third Of COVID-19 Deaths Are In Long-Term Care Facilities

I have not seen her in six months. I have no idea if or when I will see her again. There are still cases of COVID-19 in her nursing home, and Gov. Andrew Cuomo won't allow visits until a nursing facility is coronavirus-free for 14 days.

And so I wait.

I love my mom, and I miss who she was. She was a beautiful Dominican immigrant who loved to dance in the kitchen. She loved Tito Puente, Celia Cruz and the merengues of Johnny Pacheco. She had a beautiful, broad smile behind always-painted lips. She smelled of sweet perfume, and sometimes in my mind I can still hear the jingle-jangle of her bracelets when she tucked me into bed at night. Her smell, and that sound, made me feel so safe when I was kid.

I miss the sound of her Spanish-accented voice; her English vocabulary was a hybrid of the two languages. I could always translate her hybrid English. I always understood her, until now.

I feel so alone in this disease, but I know I am not. There are millions of people just like me, holding on to and loving someone with this wicked form of dementia.

I am Afro-Latina, and this disease is rampant in my community. In general, Latinos are 1.5 times more likely than non-Latino Whites to develop Alzheimer's disease. (My chances of getting the disease are also slightly elevated because my mother has it.) The health issues that plague our community—high blood pressure, heart disease, diabetes and stroke—make us more vulnerable. The statistics for the African American community are even worse; they are two to three times more likely to get the disease than white folks. 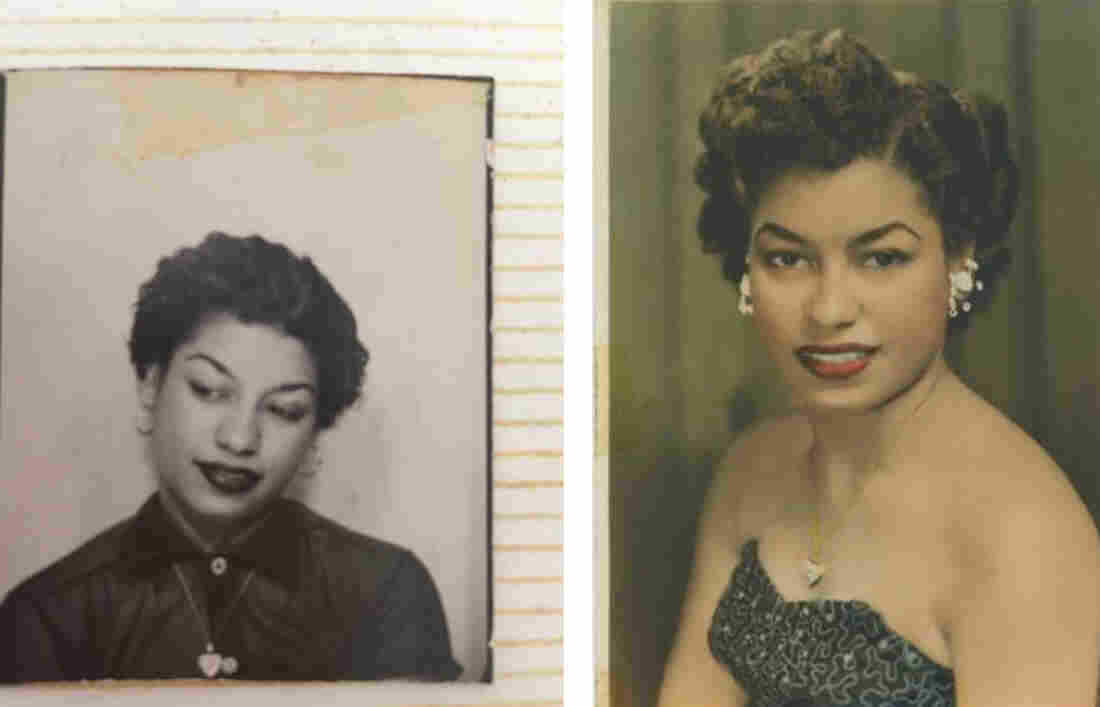 Left: A photobooth image of Ramona Latty, taken shortly after her arrival in the U.S. in 1950, at the age of 19. Right: A photo of Latty taken around the time she met the man who would become her husband, Albert. Courtesy of Yvonne Latty hide caption

But this disease is not who my mother is, even though it has taken control of her. My mom's name is Ramona Mota Latty. She was born in Santo Domingo, a city on the coast of the Dominican Republic. She grew up poor. In the eighth grade, she had to drop out of school to take care of her brother, so that her mother could work. My mom was a big dreamer who wanted more: She wanted out of Santo Domingo, where she worried she'd live a life with no work, no money and no hope.

So when she was 19, in 1950, my mom immigrated to New York. Coming to America was her dream come true. She worked in factories and went to beauty school. She met my dad, Albert, a child of Jamaican parents, at a beauty parlor in Spanish Harlem where she worked. They were married nine months later and had two daughters: me and my big sister Margie. 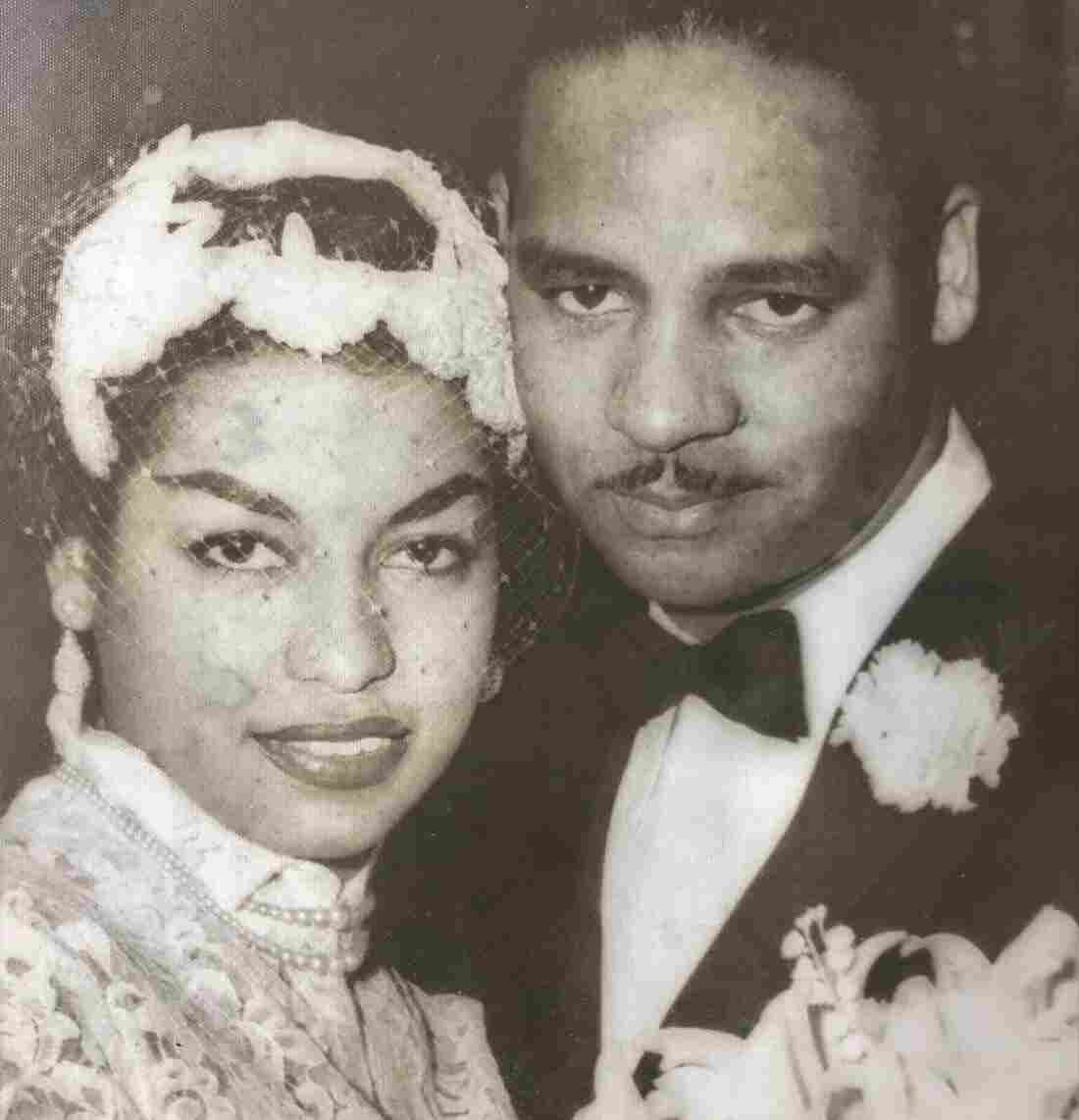 We grew up on 15 West 108th street, in a big tenement apartment with a green fire escape. I would sit there and look at all the drama unfold below me: the fights and drug sales, the drug addicts nodding off and number runners at work. The landlord abandoned our building, so the city took it over. Most winters, we barely had heat or hot water. Sometimes it would get so cold that we all had to sleep in the living room with a space heater.

My mom always said this was the happiest time of her life, because we were all together. But I struggled with it, and we butted heads. Like my mom when she was young, I wanted so much more out of life. I dreamed of escaping.

But when my sister Margie — 27 at the time — was killed in a car accident, our entire relationship changed.

My mom cried every day, she spent a lot of time at the cemetery putting flowers on Margie's grave and she prayed for her every day. She seemed so broken and it made one thing very clear to me: I really loved my mom, and I was broken too, not only because I lost Margie, but because of watching her suffer. So a few months later, on a whim, I booked us round-trip tickets to Paris, with a stop in Rome. We drank too much, ate too much and carved Margie's name everywhere we could. Our bond grew deeper; I saw how much she wanted out of life, and I so badly wanted that too —for both of us.

A lot changed in the years that followed: My father passed away, I moved to Philadelphia, and my mom became a grandmother to my daughters, Nola and Margo. My daughters loved visiting their abuelita, and I loved visiting, too. Those visits centered me, grounded me, made me feel connected to who I was and who I am, despite all the change.

For her 80th birthday, I decided we should take another big trip together —this time to the Dominican Republic, to show my daughters where my mom came from. But from the start, it was clear that something was terribly wrong with her. 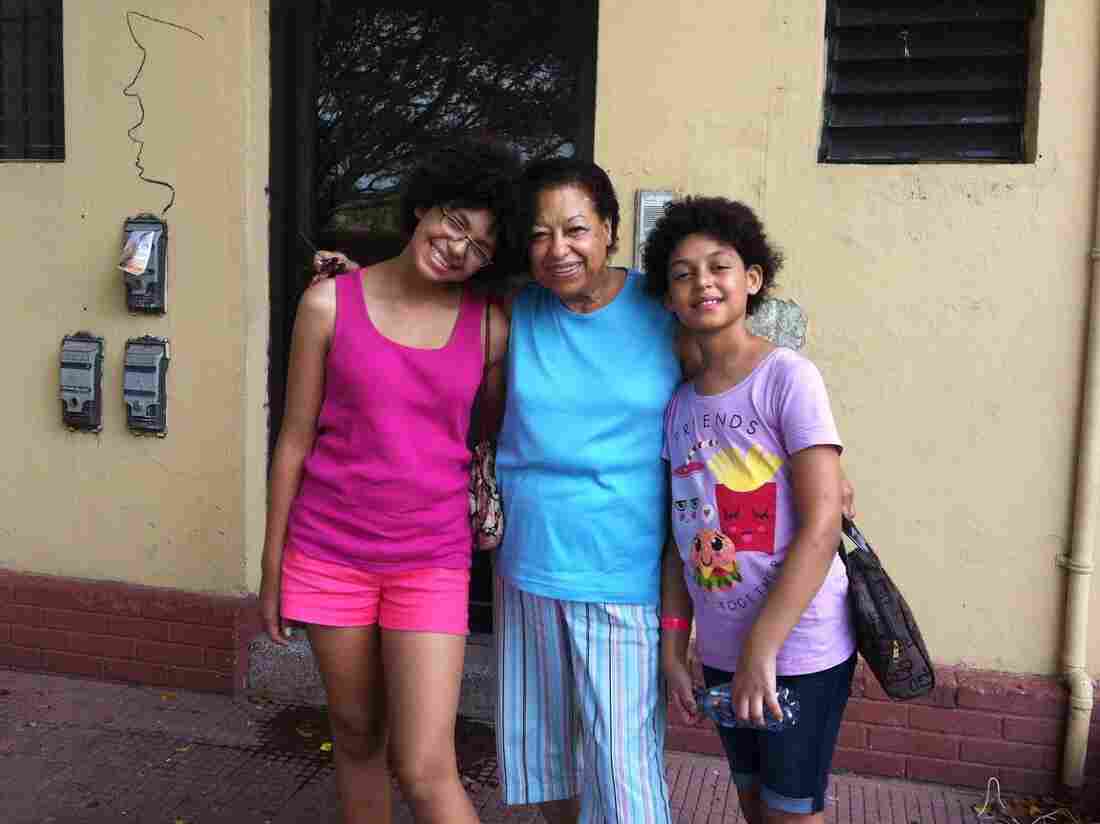 Nola, Ramona and Margo stand in front of the building where Ramona was born, during a family trip to the Dominican Republic. Courtesy of Yvonne Latty hide caption 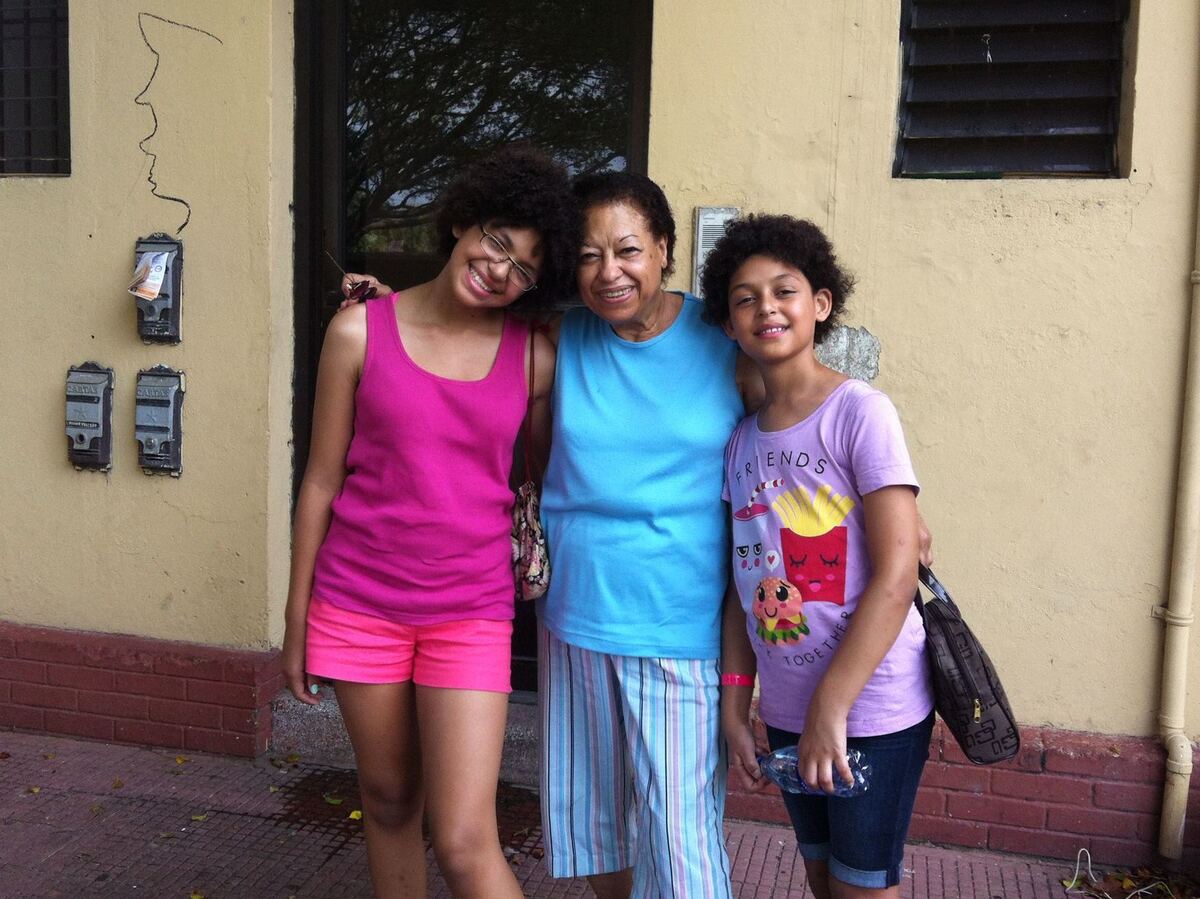 Nola, Ramona and Margo stand in front of the building where Ramona was born, during a family trip to the Dominican Republic.

When we exited the plane she got confused."She had some kind of idea that we had to go down some secret corner that was not where anybody else was going," my daughter Nola recalls.

When we got to the hotel, things got even more confusing. "We were just kind of expecting that Abuelita would be our resident Spanish speaker," Nola says. "Like, we'd tell her what to say in English and she'd say it in Spanish. It was her primary language. But for some reason, she turned to us like stone, and she was like, 'I do not speak Spanish. My husband is American. I do not speak Spanish.'"

My father had been dead for 15 years. And she had spoken Spanish her entire life.

When we returned home to New York, my mother's behavior continued to get even more bizarre. She began to hallucinate a boy who lived on top of her refrigerator. I discovered she gave all of her money away to mail-order psychics, who promised her riches. So I started visiting her more often. We spoke everyday, sometimes multiple times a day. I found myself thinking about her all the time, worried.

So we turned to her doctor, who suspected dementia and referred us to a neurologist. I remember the day we went to his office in the Bronx, where Black and Brown people packed the waiting room. After a series of tests, the neurologist told us dryly that she had Alzheimer's disease. He gave me some URLs, told me to Google it, and sent us on our way in less than 10 minutes. It was clear he had no time for us; he barely looked at my mom. I went home and cried.

Scientists Reach Out To Minority Communities To Diversify Alzheimer's Studies

But I was ready to fight this disease. I switched neurologists, and the new one referred her for a clinical trial to help with the hallucinations. While Latinos make up roughly 17% of the U.S. population, they make up less than 1% of participants in Alzheimer's clinical trials. (In general, Latinos make up just 7.5% of research participants funded by the National Institute of Health.) I was thrilled that she was going to be a part of one, and hopeful that it could help her.

But it was grueling. She lived in the Bronx, and I had to get her to NewYork-Presbyterian Hospital in Washington Heights every week for six weeks. She had to visit a series of doctors and have a psychological exam before the medicine was disbursed. She had to take the medicine at a certain time, but she couldn't take it on her own; Plus, she only had a part-time aide, and so I had to scramble for more help. It was exhausting—and in the end, she got the placebo version of the trial drug. After all that, the treatment hadn't done anything.

Things continued to get worse. Soon, the boy above the fridge was joined by a new hallucination: ICE. I would get frantic late-night calls that a black ICE van was circling the block around her apartment, and she would beg me to help her. They were coming to deport her, she said. I tried to tell her that they couldn't take her away; she was a naturalized citizen. Finally, her aide found her wandering in the street one morning. She was no longer safe. She needed 24-hour care, and I had to place her in a nursing home.

It was the hardest thing I ever had to do in my life. My strong, beautiful mother was gone and it broke my heart.

And the heartache continues as I see her on my computer screen, unable to speak, fading away from me. My last call a few days ago went like this:

"Mommy, it's me your daughter, Yvonne," I say over and over again.

But there is no response.

My mom may have not contracted COVID-19, but the disease has taken her away from me, even further than she was before. She hasn't been able to see me or her family in person since March. She has spent way too many days alone in her room. She cannot even socialize with her friends in the nursing home, because of coronavirus restrictions. What was left of her memory is deteriorating quickly.

But I do have one thing this disease cannot take from us: our memories. They will live with me, even when she is gone, until I too am just a memory.

The audio version of this story was edited by Luis Trelles and Miguel Macias. You can listen to the original version of this piece, produced in collaboration with Black Public Media, on the Latino USA podcast.