Accessibility links
Why Black Sororities 'Strolled To The Polls' For Kamala Harris : Code Switch Lawrence C. Ross, author of The Divine Nine, explains why Black sororities showed up and showed out for Kamala Harris—and how Black Greek organizations have long pushed for enfranchisement. 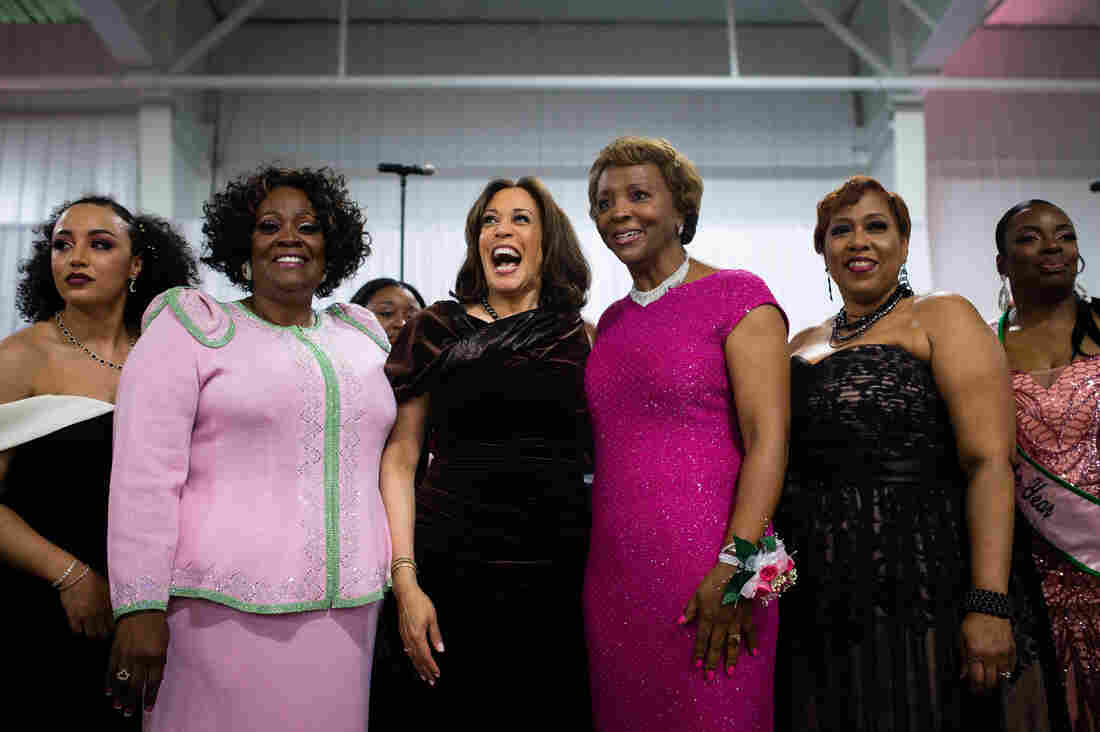 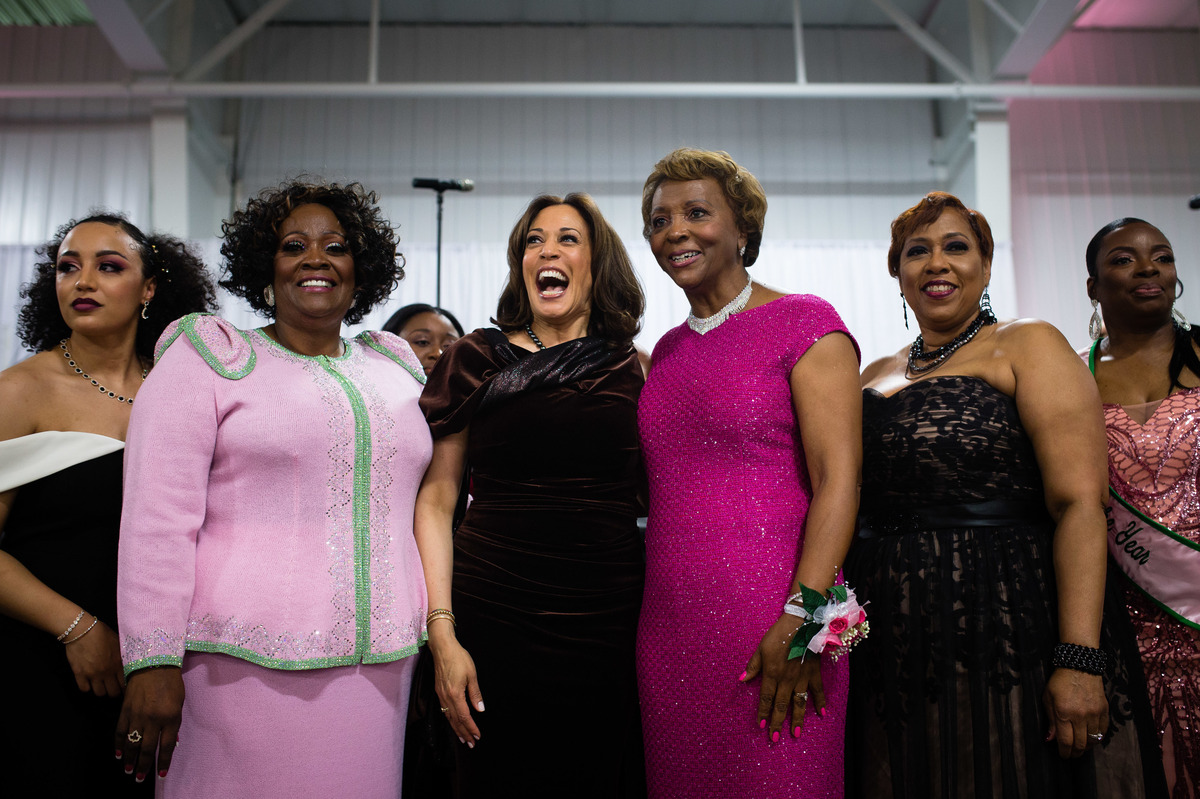 When Kamala Harris stepped to the podium in Delaware on Saturday night to speak to supporters as vice president-elect, she made all kinds of history: She'll become the first woman to serve as vice president. The first woman of African descent (on her father's side) and also the first Asian American (on her late mother's side). The first graduate of a historically Black college or university (Howard)—and the first member of a Black sorority to sit a heartbeat away from the presidency.

Black Greek organizations turned up and turned out to support Harris. They registered people to vote. They phone-banked. They encouraged, coaxed and nagged people to turn their ballots in. (You may have seen a popular Internet video: it features Black sorors dressed in their sororities' colors, accessorized in heels and pearls. Their T-shirts all said the same thing: Stroll To The Polls.)

Kamala Harris' sorority, Alpha Kappa Alpha (or AKAs, as they're known), is one of nine college-founded Black sororities and fraternities that comprise the Divine Nine. I spoke to Los Angeles author Lawrence C. Ross Jr., who himself is a Black Greek. He's Alpha Phi Alpha, the fraternity that proudly claims, among others, Martin Luther King Jr. and former Supreme Court Justice Thurgood Marshall. The 20th anniversary edition of Ross' The Divine Nine: The History of African American Sororities and Fraternities, was released last year. Our conversation has been edited for length and clarity. 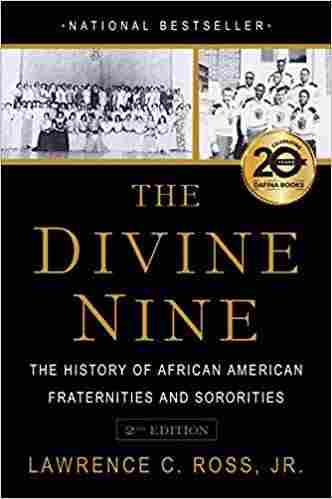 Can you put into context how long has this push for enfranchisement been going on amongst Black Greeks?

Oh, pretty much since we actually began our organizations, Alpha Phi Alpha in particular. One of, if not our oldest, national programs has been A Voteless People is a Hopeless People, which began in the 1920s. So, you know, the idea of being enfranchised in terms of the vote really has been one of the drivers for all of our organizations. We look at ourselves as being responsible for empowering our community in all aspects, whether political aspects or education and the like. So what you have are a lot of initiatives.

For example, most of the organizations [have these initiatives]. Delta Sigma Theta has Delta Days At The Nation's Capital, and Alpha Kappa Alpha has A.K.A. Day At The Capitol, and the like. They'll go to visit particular Congresspeople, they'll go to lobby. And so you combine that with the politicians that we have in our ranks, like members of the Congressional Black Caucus. And there has been a long tradition of activism, a long tradition of activism and recognizing that the power of the vote is what actually gives this community 13 percent of the population. It's its greatest power.

A lot of people don't know that, traditionally, there's a difference between Black and white sororities, fraternities. Can you tell us about that difference?

Sure. It's important to get a brief overview of how fraternities and sororities actually began. Before the Civil War, you had white fraternities formed mainly because [men] were just trying to create a space that was not as rigid as their college experience. You know, colleges pre-Civil War were about calculus, Latin, religion and the like. And the students just wanted a space to be able to be in literary societies where they'd be able to debate or just talk about the issues of the day, [like the] possibility of war — particularly getting close toward the end of the 19th century. [Then] you begin to see the development of sororities.

They could do this later because women started to go to college in larger numbers?

Right. Because before that, they never envisioned women on campus, particularly in a kind of a fraternal system. At the end of the 19th century and the early part of the 20th century, you begin to see minorities begin to create fraternities and sororities. So right around the time of the Spanish-American War, about 1898, you begin to see Latin fraternities — mostly white-presenting, like from Argentina, rather than Mexico or Central America. So you begin to see the development of those and you begin to see a lot of Asian ones. You really begin to see development of African American fraternities right around 1906, when Alpha Phi Alpha is formed. And a lot of this is tied basically to the idea that college moved from being the place of the elite where they would just go to be able to get a degree as part of the educated class, to a place where college was part of the social and economic movement in society. So [if you were Black] you could go to get a college degree and then get into the civil service or the postal service. You would qualify you to be a teacher or whatever, which would actually move you up and down the socioeconomic strata.

So belonging to one of these Black Greek organizations wasn't mostly social, kind of like a dating service, then?

So just as you're in a frat or a sorority for life, it sounds like you're also obligated to carry out the mission of that organization for life.

Yes. The whole idea is connected to the idea of being race men and race women. The idea that you don't go to college for the more American, individualistic reason. Typically, Americans go to college because "I go to college, I get my degree, I get a job. I have my family. Hey, I just live my life as an individual." Black people, and not just Black people in the Divine Nine, understand that they are not in college simply based upon their own individual characteristics. Andthey have a moral responsibility not just to get a degree for themselves, but to also enrich the community.They recognize the structure [of mainstream society] is intentionally created to denigrate them as second-class citizens. And what they're doing typically in the work of the fraternities and sororities is trying to deconstruct that.

Kamala has been repping her black Greeks very hard! How indebted do you think the Biden-Harris ticket is for the support it got from Black Greeks and their work in voter mobilization this year?

Look at it this way. I think, you know, Kamala is not the only Greek in the Biden organization. Really, fraternities and sororities are all through most Democratic and some Republican administrations. I think people are more conscious of it because Kamala is the first Black Greek to reach the position of vice president-elect.

So that's good for her sorority, Alpha Kappa Alpha—but maybe cause for a bit of envy from other Greek organizations?

There's always a friendly rivalry between all of our organizations and people out on the outside typically take it way more seriously than we actually do. It is literally like your aunts and uncles all coming to Thanksgiving: They may talk about each other, but nobody else can talk about them, right?

Right. Your people are your people. So with Kamala ...

Oh yeah.We're like, "OK, for this, we're putting all our hands in together. We're going to make this happen." And [all the Divine Nine] came together like a stroll-to-the polls type deal.