Domestic Intrigue: The Marriage of Figaro

November 28, 2008 • Isabel Bayrakdarian and Ana Maria Martinez star in Mozart's The Marriage of Figaro, an opera with a slapstick surface that hides deeply emotional roots. The production is from Houston Grand Opera.

November 27, 2008 • Twenty years after moving from South Africa to the U.S., Philadelphia-based folk-rocker Andrew Lipke has carved out a distinctive sound that reflects his surroundings, both past and present. Hear Lipke perform live in concert from WXPN in Philadelphia.

November 27, 2008 • In a concert recorded by Swiss Radio DRS2, the charismatic Richard Bona has a heavenly voice and plays a funky bass. His newest CD is Bona Makes You Sweat, and at the 2008 Basel Jazz Festival, he goes further than that. Bona makes you swoon, sing, stand up and boogie with his band from Africa, the Caribbean and the U.S.

November 26, 2008 • Canadian-born folk singer Ferron issued her 14th release in 2008, titled Boulder. A collection of revisited songs, the album was recorded and produced by indie-rock violinist B----, who accompanies Ferron here in live performance on Mountain Stage.

November 26, 2008 • Making his third appearance on Mountain Stage, Billy Bragg is best known in America for teaming up with Wilco to set some newly unearthed Woody Guthrie lyrics to music on 2000's Mermaid Avenue. But in his native England, Billy Bragg is highly regarded as an egalitarian songsmith who sings for the working class.

November 26, 2008 • Songwriter, composer and guitarist Bruce Cockburn takes listeners on a brief career overview in a live performance recorded at New York's legendary Town Hall. Already a member of the Canadian Music Hall of Fame, Cockburn is one of the most heralded and awarded musicians in his native Canada, having won numerous Juno awards and reached gold and platinum sales on multiple releases.

November 25, 2008 • Houston-born songwriter Rodney Crowell took his talents to Nashville in the 1970s and has been evolving ever since. His 1988 album Diamonds and Dirt garnered five No. 1 country singles, including one with his then-wife Rosanne Cash (with whom he still works today). In this Mountain Stage appearance, he performs music from some of his most recent albums, including this year's Sex & Gasoline.

November 24, 2008 • Recorded at New York City's historic Town Hall, and just down the road from her home, singer and songwriter Rosanne Cash performs an acoustic set for her third appearance on Mountain Stage. Included is music from her critically acclaimed album Black Cadillac, as well as a cover of Townes Van Zandt's "Two Girls."

November 21, 2008 • It began as an informal folk-rock jam session at a bar on weekends, but Ollabelle evolved into a full-time entity at the beginning of this decade. After recording its organic, impressively collaborative debut on spec at a local studio, Ollabelle won over producer T-Bone Burnett, who was impressed enough to sign the group to his label. Hear Ollabelle perform live in concert from WXPN in Philadelphia.

November 21, 2008 • Strauss's lurid yet sumptuous one-act opera tells the story of Elektra and her decidedly dysfuntional family — her murdered father Agamemnon, her frantic sister Chrysothemis and their homicidal mother, Klytaemnestra. The production is from the Washington National Opera.

November 20, 2008 • Based out of his tiny, rustic hometown of Slaughters, Ky., songwriter and guitarist Chris Knight writes backwoods poetry with introspection he's clearly gained by living the words he writes. On this Mountain Stage appearance, Knight performs songs from his latest album, Heart of Stone, as well as the title cut from his previous record, Enough Rope.

Johnny Griffin At The Village Vanguard

November 20, 2008 • Only a few days after the release of the album Smokin' Sax, and before a date to promote it, saxophonist Johnny Griffin died at age 80 at his chateau in Availles-Limouzine, France. Hear his final U.S. homecoming at the Village Vanguard, recorded live by JazzSet

Johnny Griffin in Concert on JazzSet 7/25/08

November 19, 2008 • In their fourth appearance on Mountain Stage, the modern-day Irish traditionalists in Solas perform songs from their latest release, Love and Laughter. The set opens with a series of jigs and a traditional Irish love song, and later ends with a rendition of Bob Dylan's "Seven Curses." 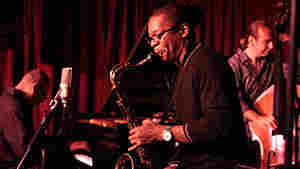 November 19, 2008 • He's descended from jazz royalty, and he wears it with pride. But the saxophonist has engineered his own modern, personal approach to improvisation. Hear Ravi Coltrane's working quartet perform live.