December 31, 2008 • With a timid yet powerful voice, Amy Correia took the stage armed with a songbook inspired by authors, poets and songwriters. Correia performs a series of new, yet-to-be-recorded songs in this Mountain Stage appearance from January 2008.

Toast Of The Nation Swings Into 2009

December 30, 2008 • Jason Hammel and Kori Gardner-Hammel perform as the duo Mates of State. The pair's latest album, Re-Arrange Us, is beginning to show up on year-end "best of" lists across the country. In this performance on Mountain Stage, the couple showcases songs from that album, as well as 2006's Bring It Back.

December 30, 2008 • He should be a name everyone knows by now. Instead, troubadour David Dondero returned to NPR having slept the night before in his car.

December 30, 2008 • Ontario's Jeremy Fisher celebrated the release of his first release, Let It Shine, by taking a bicycle trip from Seattle to Vancouver, gaining followers with every stop. Fisher and his band kick off the 25th season of Mountain Stage with performances from his latest album, Goodbye Blue Monday.

December 29, 2008 • The singer-songwriter best known for his 1991 hit "Walking in Memphis" suffered a carjacking and a bullet wound to the head on a 2002 tour. But he lived to tell the tale, record a new album and appear on Mountain Stage.

December 26, 2008 • Made up of two siblings, their cousin and a childhood friend, the Clarksburg, W.Va., group plays a high-energy hillbilly style of country music. They play a set from their forthcoming debut album, due out in 2009.

December 25, 2008 • The bluegrass musician from Virginia's Blue Ridge Mountains has been a musician at Tokyo Disneyland and has won flatpicking competitions in Colorado. With his band Natural Bridge, Keel played a set of fiery, authentic music on Mountain Stage.

December 24, 2008 • The Canadian singer-songwriter, who notes that she hails from the setting of Anne of Green Gables, was one of the winners of the Mountain Stage NewSong Contest. Here, she performs songs from her third album, If You Were for Me.

An Irish Christmas With Dervish And Friends

December 24, 2008 • One of the biggest traditional bands in Ireland, Dervish took its act to Lissadell House in County Sligo — a favorite spot of W.B. Yeats — to make a special Christmas recording. Piper Paddy Moloney of The Chieftains and vocalist Roisin O'Reilly guest star.

December 23, 2008 • Her father was Louis Armstrong's musical director in the 1930s. Her mother still plays the bass. So it's no surprise that Russell has chops. She sings a set of bluesy numbers and standards for Mountain Stage. 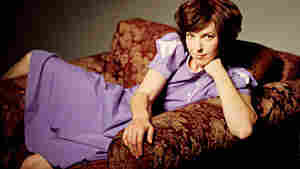 December 23, 2008 • Thomas performs stand-up comedy in her spare time, and sometimes between songs. But her new album, A Very Rosie Christmas, is often thoughtful — even reverent. Her music is gentle, sincere and just right for those who wish the holidays were a little less noisy.

December 22, 2008 • The country vocal quartet had just released its latest album when it recorded this session for Mountain Stage. A year later, the band is primed to begin its first national headlining tour, Grammy nomination in tow.

December 18, 2008 • It may be the longest night of the year, but the saxophonist and world-music ambassador has celebrated it every year for more than a quarter century by playing a concert. Hear Winter's annual theater, dance and music special.

December 18, 2008 • The Count Basie Orchestra, with Basie on piano, came roaring out of Kansas City during the Great Depression. Unrehearsed and unplugged, soul singer Ledisi shines with the famed Count Basie rhythm section — and, later, with the whole band.