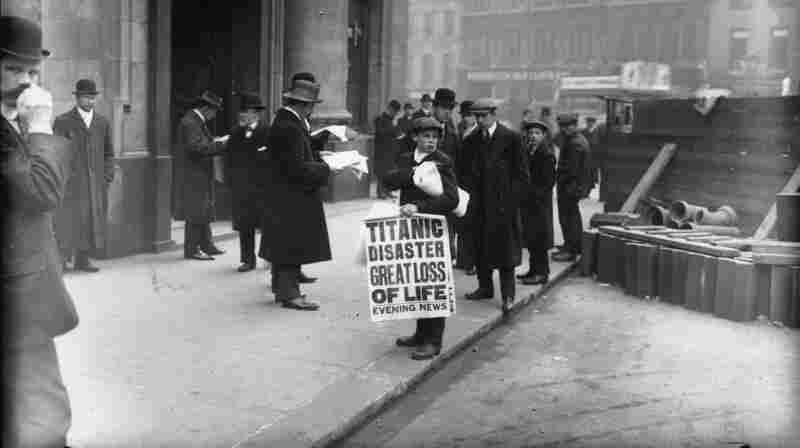 A London newspaper boy sells copies of the Evening News with a story about the sunken ship. Topical Press Agency/Getty Images hide caption

Gavin Bryars' 'Sinking Of The Titanic' In Concert

March 31, 2008 • Bryars' first major composition, The Sinking of the Titanic, still sounds as vital, fresh and forward-thinking as it did when it was written in 1969. The piece was performed in 2008 as part of the Wordless Music Series recorded by WNYC in New York City.

The Raveonettes in Concert

March 28, 2008 • The Danish duo mixes '50s and '60s rock with harmonies inspired by The Everly Brothers and The Ronettes. But the band is no mere throwback, with an increasingly appealing and timeless rock catalog. Hear The Raveonettes perform a concert from WXPN and World Café Live in Philadelphia.

The Ravenonettes in Concert on Live Friday 3/28/08

March 28, 2008 • With his ironic wordplay, deadpan delivery, and spiky guitar hooks, Malkmus helped make his former group Pavement one of the most influential rock acts of the '90s. Hear Malkmus and his backing band The Jicks, recorded live in concert from Washington, D.C.

March 28, 2008 • When Verdi's A Masked Ball was banned by Italian censors, for depicting the murder of a European king, he made the king a governor and moved the whole story to Boston — creating a hit in the process.

An Audio Introduction to 'A Masked Ball'

March 27, 2008 • Thielemans is the man who made the harmonica a jazz instrument. In a Brazilian-heavy set recorded at the 2005 Tanglewood Jazz Festival, he's joined by Oscar Castro-Neves, Airto, and pianist Kenny Werner. Now in his 80s, Thielemans still loves to play. Collaboration between WBGO and WGBH.

Toots Thielemans in Concert on JazzSet 2005

March 25, 2008 • The violin concerto is a 300-year-old art form, and today's composers are still judged by how well they can combine a fiddle with an orchestra. Leila Josefowicz performs John Adams' 1993 concerto in concert with the St. Paul Chamber Orchestra.

March 21, 2008 • Southern singer Lizz Wright crafts a distinct mixture of jazz, folk, gospel, and R&B, but she's been most widely celebrated as a rising star in the jazz world. Hear Wright perform a concert from WXPN and World Café Live in Philadelphia.

'The Secret,' by Bedrich Smetana

March 21, 2008 • Often called "the father of Czech opera," Bedrich Smetana's composed 8 operas altogether, including the 1878 charmer, The Secret, a gentle folk tale about a family feud and long-delayed love.

An Audio Introduction to 'The Secret'

March 15, 2008 • Tokyo Police Club's party-starting mod-punk show up minus its heavy rhythms, in an acoustic version of "Tesselate." David Monks sits solo on The Current's stage, on the corner of 7th and Red River in Austin, for the SXSW festival.

The Heavy Gets Dirty and Funky

March 15, 2008 • Traveling from Noid, a small town in England, The Heavy creates a one-of-a-kind retro-soul sound that's heavy, dirty, and funky. Performing at the corner of 7th and Red River in Austin, Tex., the band plays "That Kind of Man" for a crowd at the South by Southwest Music Festival.

March 14, 2008 • With the keyboardist literally running in from the street to play, The Weakerthans play SXSW. Four albums in, The Weakerthans' members are still making intelligent, punk-tinged pop music. The band's leader, John K. Samson, is a fiction writer disguised as a songwriter, crafting an impressive array of troubled wanderers and everyday Joes.

'Lysistrata, or The Nude Goddess,' by Mark Adamo

March 14, 2008 • Mark Adamo's Lysistrata preaches a pro-love, anti-war message that dates all the way back to a satire by Aristophanes in the 5th century B.C. The piece was commissioned by Houston Grand Opera.

An Audio Introduction to 'Lysistrata'

March 14, 2008 • The solo virtuoso guitarist Kaki King is now supported by a full backing band. They played for the World Cafe Party at SXSW with The Weakerthans, Someone Still Loves You Boris Yeltsin, Liam Finn and The Whigs on March 14.

March 14, 2008 • Backed by just an electric guitar, folk-punk legend Billy Bragg took the stage at The Current's showcase, on the corner of 7th and Red River in Austin, Texas, for SXSW.