Accessibility links
Coronavirus: WHO Head Says Nations Must Attack As 'Pandemic Is Accelerating' : Coronavirus Live Updates Despite an alarming rush past 300,000 cases worldwide, the WHO's leader says, "We're not helpless bystanders. We can change the trajectory of this pandemic."

Coronavirus: WHO Head Says Nations Must Attack As 'Pandemic Is Accelerating'

Coronavirus: WHO Head Says Nations Must Attack As 'Pandemic Is Accelerating' 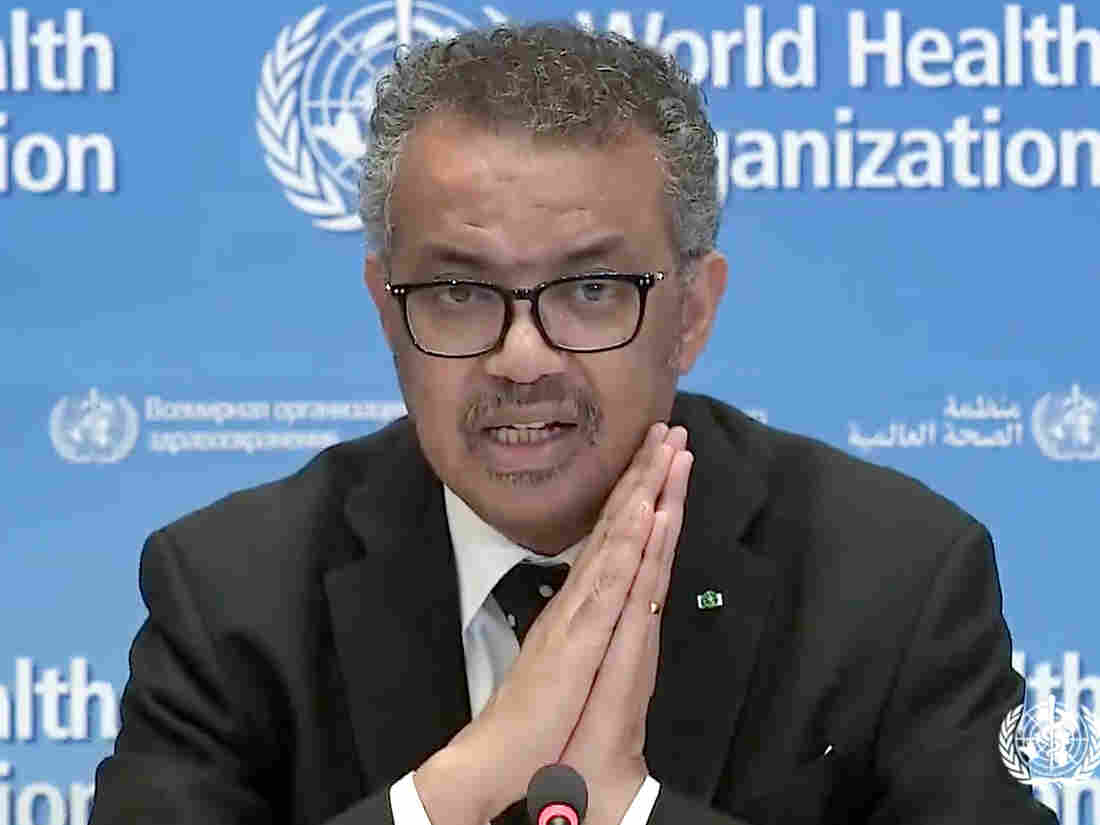 "To win, we need to attack the virus with aggressive and targeted tactics," World Health Organization head Tedros Adhanom Ghebreyesus says of the COVID-19 respiratory disease, which is now in nearly every country in the world. AFP via Getty Images hide caption 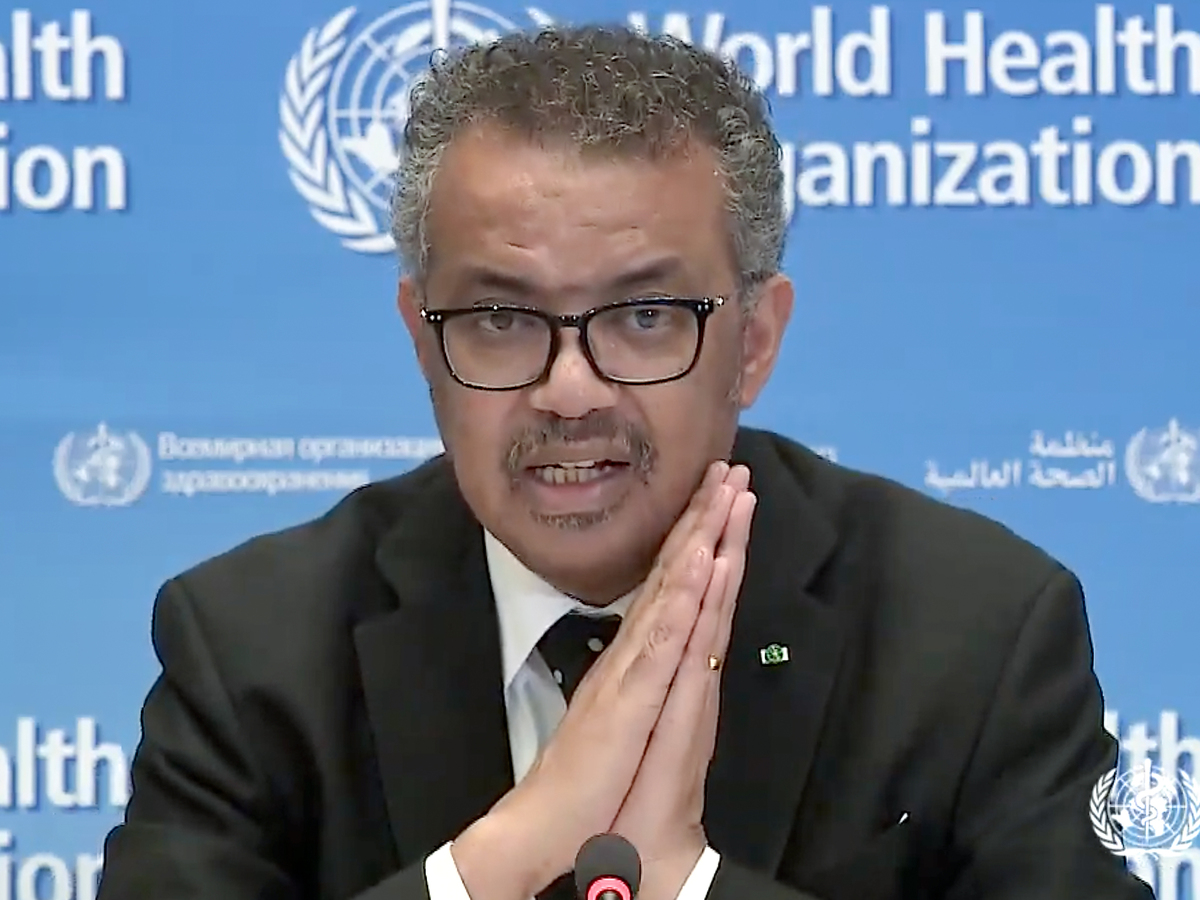 "To win, we need to attack the virus with aggressive and targeted tactics," World Health Organization head Tedros Adhanom Ghebreyesus says of the COVID-19 respiratory disease, which is now in nearly every country in the world.

With the coronavirus outbreak blowing past the 300,000-case mark, WHO Director-General Tedros Adhanom Ghebreyesus says world leaders and health officials won't be able to defeat COVID-19 if they rely only on defensive measures such as social distancing and requiring people to stay at home.

The coronavirus has now spread to nearly every country on the planet, the head of the World Health Organization said.

After describing the dire rate at which new cases are being reported, Tedros added, "But we're not prisoners to statistics. We're not helpless bystanders. We can change the trajectory of this pandemic."

The WHO leader's comments come as governments around the world face the daunting tasks of containment and mitigation: stopping the highly contagious viral disease in its tracks where possible, while also mitigating its effect on vulnerable populations and slowing its spread in communities where the virus has already gained a foothold.

"You can't win a football game only by defending. You have to attack as well," Tedros said at a briefing in Geneva.

"Asking people to stay at home and other physical-distancing measures are an important way of slowing down the spread of the virus and buying time — but they are defensive measures.

"To win, we need to attack the virus with aggressive and targeted tactics — testing every suspected case, isolating and caring for every confirmed case and tracing and quarantining every close contact."

There are more than 370,000 confirmed coronavirus cases worldwide, according to a dashboard created by Johns Hopkins University's Whiting School of Engineering, which tracks COVID-19 data in near real time. That figure includes more than 100,000 people who have recovered from the disease, along with more than 16,000 who have died.

"Numbers matter, because they're not just numbers. They're people, whose lives and families have been turned upside down," Tedros said. "But what matters most is what we do."

For weeks, some of the most alarming COVID-19 numbers in the world have been emanating from Italy, which surpassed China's death toll from the respiratory disease last week. On Thursday afternoon, Italy's death toll of 3,405 eclipsed China's 3,249 deaths. On Monday afternoon, Italy said 6,077 people in the country have now died from COVID-19, and the country confirmed nearly 64,000 cases in total.

But Italian health officials are also seeing a potential bright spot, as Italy is reporting smaller daily increases in both deaths and new coronavirus cases.

"Deaths and new cases have grown every day for more than a month," NPR's Sylvia Poggioli reports. But over the weekend, the day-to-day numbers finally started to shrink.

"Today, the country marks the 14th day under quarantine, in which people are subjected to draconian restrictions and authorized to go out only for very few purposes," Poggioli adds.

If the pattern continues for several days, Italian officials say, it will be a sign that Italy may have finally turned a corner in its battle with COVID-19.

Global health experts are also keeping a close eye on India and its response to the coronavirus.

As Tedros took stock of the state of the global fight against COVID-19, he echoed many leaders in calling for solutions to ease a dangerous shortage of personal protective equipment such as N95 face masks and gloves.

"Health workers can only do their jobs effectively when they can do their jobs safely," Tedros said. "We continue to hear alarming reports from around the world of large numbers of infections among health workers."

Urging governments to make it a priority to protect hospital staff and other vital workers, the WHO head said that without action, "many people will die because the health worker who could have saved their life is sick."