Accessibility links
As The Coronavirus Spreads In Pakistan, Volunteers Rush Out To Help : Coronavirus Live Updates One Pakistani entrepreneur is making protective gear. A Pakistani lawyer raised thousands of dollars and converted his office into a food storehouse for people in need. 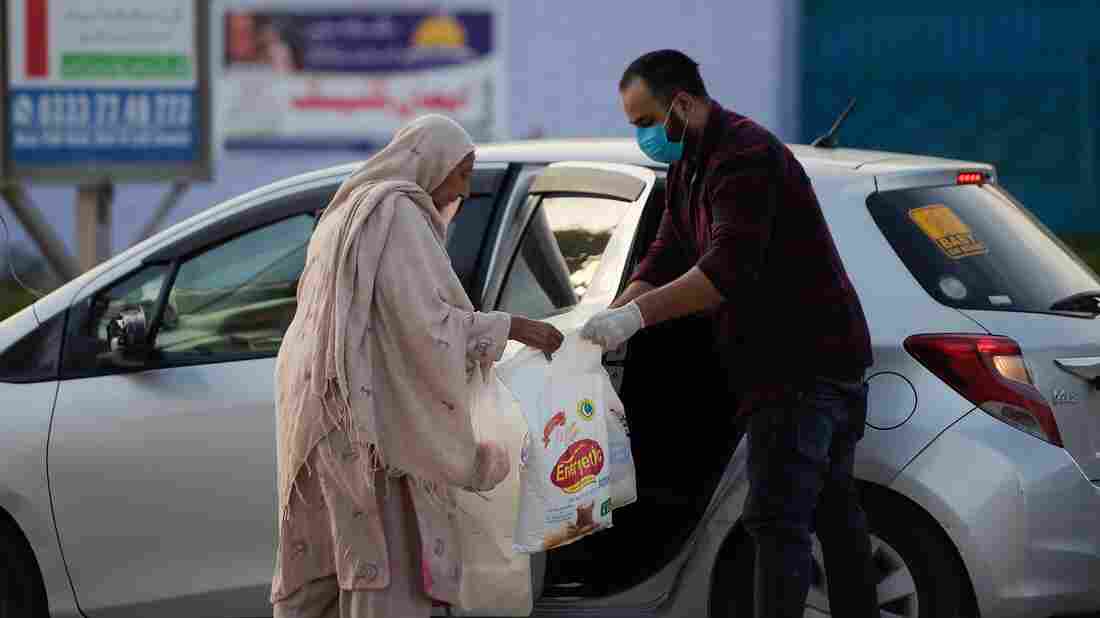 A man donates food to an elderly woman during a government-imposed nationwide lockdown as a preventive measure against the new coronavirus in Islamabad on Sunday. Farooq Naeem/AFP via Getty Images hide caption 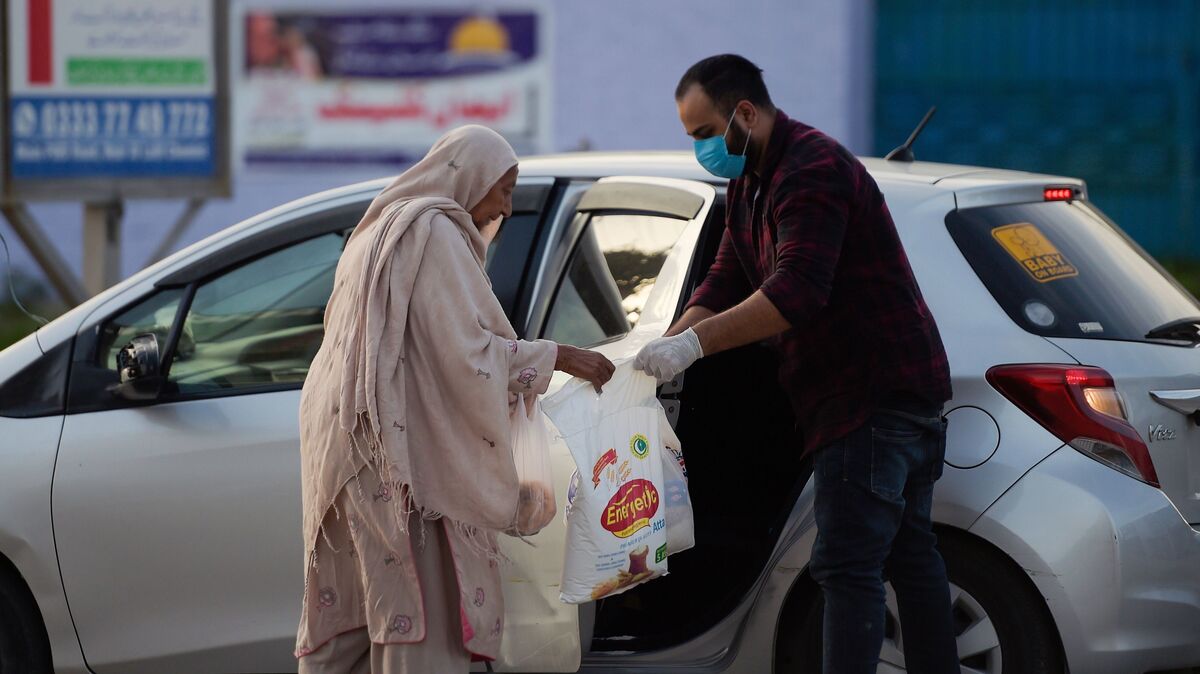 A man donates food to an elderly woman during a government-imposed nationwide lockdown as a preventive measure against the new coronavirus in Islamabad on Sunday.

Until last week, Ahsan Pirzada ran a law firm in the Pakistani capital. But on March 22, when businesses shut down across Islamabad and thousands of low-wage Pakistanis lost their jobs, he decided to act.

He raised thousands of dollars through his friends and Facebook acquaintances to buy food. He converted his office into a storehouse and made ration packs with flour, rice, sugar, lentils, milk and cooking oil.

"This is enough for a family of four to five people to survive for 14 days," says Pirzada. He gestures to 35 food packs piled in a friend's pickup truck that he is going to deliver to a nearby slum.

Pakistanis pride themselves on their volunteer culture, and days into countrywide shutdowns to halt the spread of the new coronavirus, citizens have sprung into action.

Pakistan has registered 18 deaths from COVID-19 and has identified 1,650 cases of infection, according to government figures, but officials say the number of people with the coronavirus could be as high as 12,000.

One woman, Irum Mumtaz, set up a quarantine ward for a public hospital, run by volunteers. An entrepreneur, Umer Hussain, makes free protective suits for medics. Individuals like Pirzada distribute food. So do leftist groups like Corona Solidarity Campaign and the Robin Hood Army. A Pakistani nonprofit, The Citizens Foundation, does the same but on scale, using its network of 1,600 low-cost schools to aid 700 villages and slums.

But this pandemic poses unprecedented challenges: Pirzada only has a flimsy mask because there's a global shortage of protective gear. And in previous distributions, people crowded around him. "They're in desperate straits," he says. "They will come close and they will try to grab onto you. You can ask them to stay at a distance, but it doesn't work."

This time, Pirzada tries something new: He and other volunteers will put the rations in a church inside the slum. Then they'll call each designated family to pick up their share.

Pirzada parks near the church and volunteers start unloading the rations. People immediately crowd around and keep entering the church, despite efforts to keep them out. One woman tugs at Pirzada's sleeve, demanding food. "Please wait five minutes, mother!" Pirzada says. "I've been waiting 10!" she snaps.

Another woman lingers outside, hoping for food, but she's not on Pirzada's distribution list of 35 families. Shabana — she only has one name — says her brothers are out-of-work taxi drivers and they need food.

Pirzada says he'll make another distribution soon. As for his personal safety, another volunteer group will donate protective gear to him.