Accessibility links
Commander Of Coronavirus-Struck Navy Ship Pleads For Help : Coronavirus Live Updates With more than 100 sailors reportedly infected, the commander of the USS Theodore Roosevelt aircraft carrier says the shipboard outbreak will keep spreading unless his 4,000+ crew is quarantined. 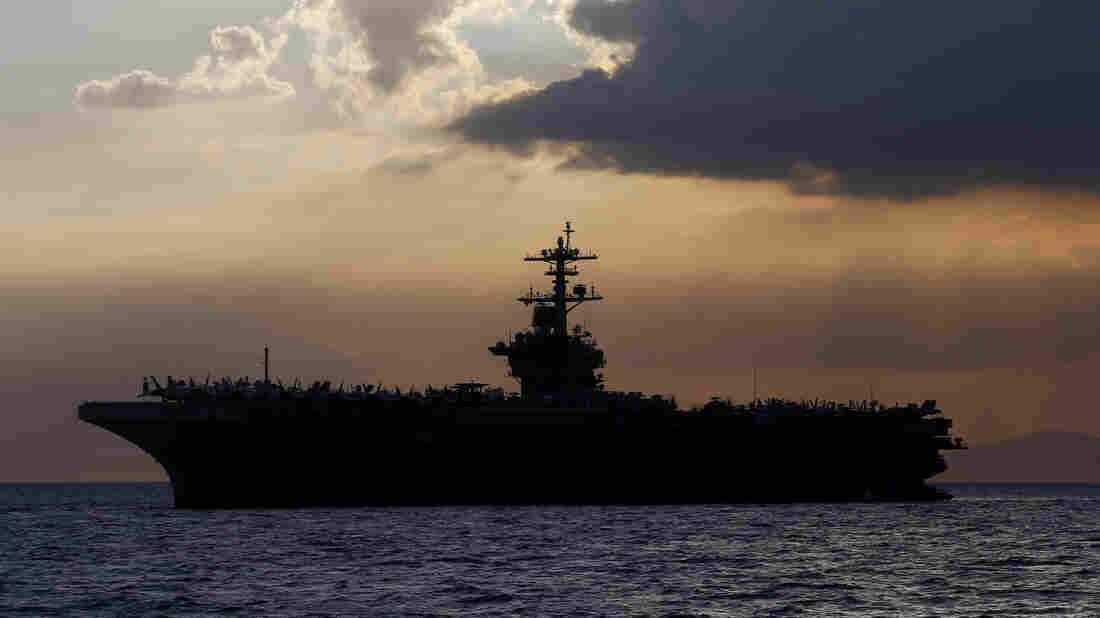 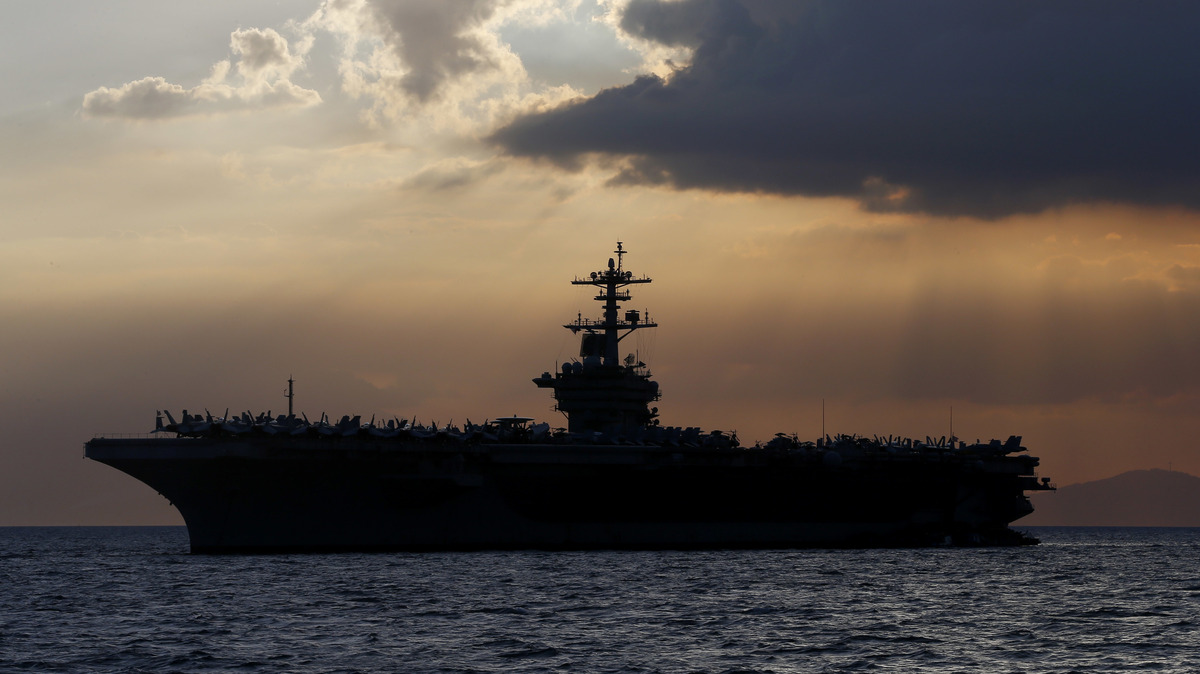 The aircraft carrier USS Theodore Roosevelt anchored off Manila Bay west of Manila, Philippines, in a photo from 2018.

The commander of an American nuclear-powered aircraft carrier docked in Guam that has been struck by a coronavirus outbreak has sent the Pentagon a strongly worded plea for urgent assistance.

"The spread of the disease is ongoing and accelerating," USS Theodore Roosevelt commander Capt. Brett Crozier writes in a letter dated March 30. "Decisive action is required now in order to comply with CDC and [U.S. Navy] guidance and prevent tragic outcomes."

Acting Secretary of the Navy Thomas Modly confirmed on March 26 that at least eight of the Roosevelt's more than 4,000 crew members had tested positive for COVID-19, and five had been removed from the ship. He added that while the vessel would be docked in Guam, those aboard would not be allowed to venture beyond the pier.

Officials tell NPR that the aircraft carrier, whose home port is San Diego, now has more than 50 known infected sailors.

The ship's commander writes that except for a "handful" of senior officers' staterooms, none of the ship's quarters meet the recommended guidelines for isolation and quarantine.

A limited number of the aircraft carrier's sailors have been moved ashore to locations in Guam. Those who are sick with COVID-19 have been moved to hospitals while the rest have been placed in sites with restricted movement, although Crozier notes that only one of these places complies with U.S. Navy guidance calling for isolation in rooms with their own bathrooms.

"Infected Sailors reside in these off-ship locations," he writes in the letter, which was first reported by the San Francisco Chronicle. "Two Sailors have already tested positive in an open bay gymnasium equipped with cots."

Noting that group quarantine won't work, Crozier is blunt in his assessment of current conditions: "The environment most conducive to the spread of the disease is the environment the crew of the TR is in right now, both aboard ship and ashore," he writes, going on to describe "large amounts of Sailors in a confined space," "open, shared berthing," shared restrooms, mess halls and workspaces, and meals cooked and served by "exposed personnel."

Every member of the ship's crew was to be tested, despite the shortage of test kits reported last week. But Crozier says such tests are no guarantee that sailors are free of the coronavirus, and that he believes the focus on testing is "inappropriate."

"The COVID-19 test cannot prove a Sailor does not have the virus; it can only prove that a sailor does," writes the commander. "Based on data since TR's first case, approximately 21% of the Sailors that tested negative and are currently moving into group restricted movement ashore are currently infected, will develop symptoms over the next several days, and will proceed to infect the remainder of their shore-based restricted group."

Noting that the current strategy of removing some crew from the aircraft carrier while trying to clean it will slow the spread of the virus but fail to eradicate it, Crozier recommends removing 90% of the crew and isolating them ashore for two weeks. The remaining crew would run the ship's nuclear reactor and do sanitizing, tasks which the commander calls "a necessary risk."

"Keeping over 4,000 young men and women on board the TR," he adds, "is an unnecessary risk and breaks faith with those Sailors entrusted to our care."

Crozier ends his four-page letter requesting "all available resources" to find quarantine-compliant rooms for his entire crew "as soon as possible."

"This will require a political solution but it is the right thing to do," he concludes. "We are not at war. Sailors do not need to die."

Asked about Crozier's letter during a CNN interview Tuesday, Modly said he appreciated the input from the ship's commander and promised that the Navy would "get to work immediately" on the issues he raised.

"We've been working actually the last several days to move those sailors off the ship and to get them into accommodations in Guam," Modly said. "The problem is that Guam doesn't have enough beds right now, and so we're having to talk to the government there to see if we can get some hotel space, create some tent-type facilities there."

Not all those on board the Roosevelt, he added, would be removed immediately.

"The key is to make sure that we can get a set of crew members that can man all those critical functions on the ship, make sure they're clean, get them back on, clean the ship and get the other crew members off," he told CNN. "And that's the process we're going through. It's very methodical. We're absolutely accelerating it as we go."

In a statement emailed to NPR, the Navy had this response to Crozier's letter: "Navy leadership is moving quickly to take all necessary measures to ensure the health and safety of the crew of USS Theodore Roosevelt, and is pursuing options to address the concerns raised by the commanding officer."