Accessibility links
Coast Guard Tells Cruise Ships With COVID-19 Cases To Stay Away From U.S. Ports : Coronavirus Updates By registering ships in the Bahamas and other countries, many companies can avoid U.S. laws. The Coast Guard says they should seek medical aid from those countries rather than rely on the U.S. 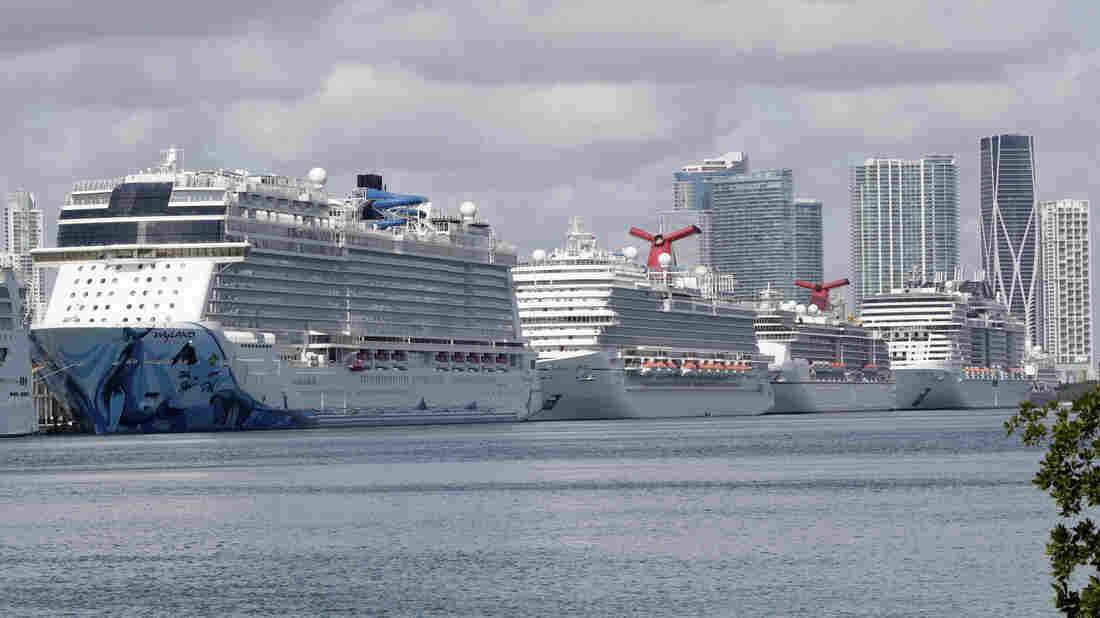 Cruise ships are docked at PortMiami on Tuesday. The U.S. Coast Guard has been working with cruise companies to bring people off of ships stricken with the coronavirus — but a new bulletin also says foreign-flagged ships should not rely on U.S. help. Wilfredo Lee/AP hide caption 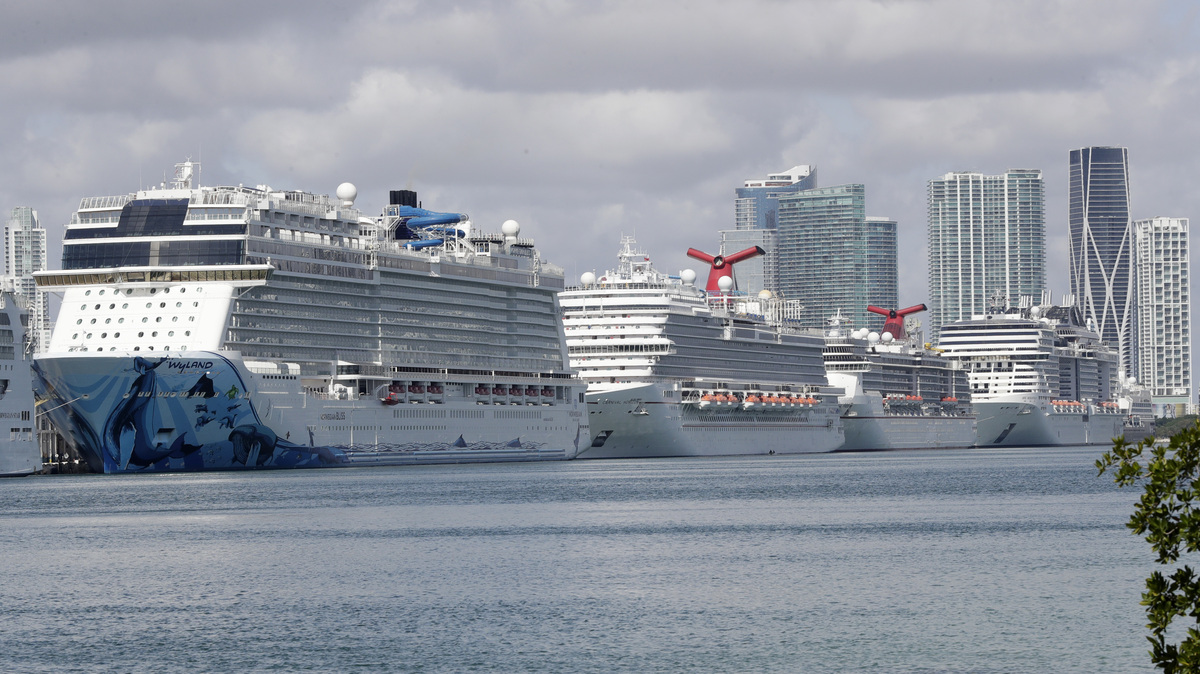 Cruise ships are docked at PortMiami on Tuesday. The U.S. Coast Guard has been working with cruise companies to bring people off of ships stricken with the coronavirus — but a new bulletin also says foreign-flagged ships should not rely on U.S. help.

The U.S. Coast Guard is telling foreign-flagged cruise ships to be prepared to care for people with COVID-19 for an "indefinite period of time" at sea or to seek help from countries other than the U.S., citing a health care system that is being overwhelmed. The instructions are in a new safety bulletin that took effect this week along the southern Atlantic coast, including Florida – which is reporting more than 6,700 coronavirus cases, as of Tuesday evening.

If a cruise ship must send someone ashore for medical care, its owner will be responsible for essentially every step of the trip, from arranging an evacuation to hiring a private ambulance and ensuring the person has a spot in a hospital. But the Coast Guard bulletin, signed by Rear Adm. E.C. Jones of the 7th District based in Miami, also says it could be difficult to find any facility in South Florida that can take new COVID-19 patients.

"Medical facilities in the Port of Miami, for example, are no longer accepting MEDEVAC patients due to limited hospital capacity and it is expected that neighboring counties will follow suit," wrote Jones, whose Coast Guard district includes Florida, Puerto Rico, Georgia and South Carolina.

The new medical requirements apply to any vessel carrying more than 50 people. It also singles out cruise ships that are registered in the Bahamas – referring to many of the ships owned by large cruise lines such as Carnival, Royal Caribbean and Norwegian.

Foreign-flagged ships are the norm in the cruise industry. By registering ships in the Bahamas, Panama and other countries, cruise companies can avoid U.S. taxes as well as employment and environmental laws. But now, the Coast Guard is telling those companies that their ships should seek medical care in the countries where they are registered, rather than rely on the U.S.

"Foreign flagged vessels that loiter beyond U.S. territorial seas, particularly those registered to The Bahamas, that require a MEDEVAC to a shoreside facility should seek flag state support prior to seeking support from the limited facilities in the U.S.," Jones wrote.

The cruise ship industry is currently under a 30-day suspension of all trips from the U.S. that took effect on March 14. But dozens of ships remain at sea.

The Coast Guard memo was first reported by the Miami Herald, which gives this accounting of the current situation off the Florida shore:

"Seventeen ships are lined up at Port Miami and Port Everglades, with more than a dozen others hovering miles offshore. Most have only crew aboard, but several still carrying passengers are steaming toward South Florida ports. In SEC filings Tuesday, Carnival said it has more than 6,000 passengers still at sea. New sailings were halted by all major lines on March 13."

News of the Coast Guard bulletin emerged as a Carnival-owned Holland America seeks a port for the Zaandam, a cruise ship on which four people have died and nearly 200 people were sickened by suspected COVID-19. The company wants the ship to dock in Fort Lauderdale; several countries have denied permission for the ship to dock and disembark passengers.