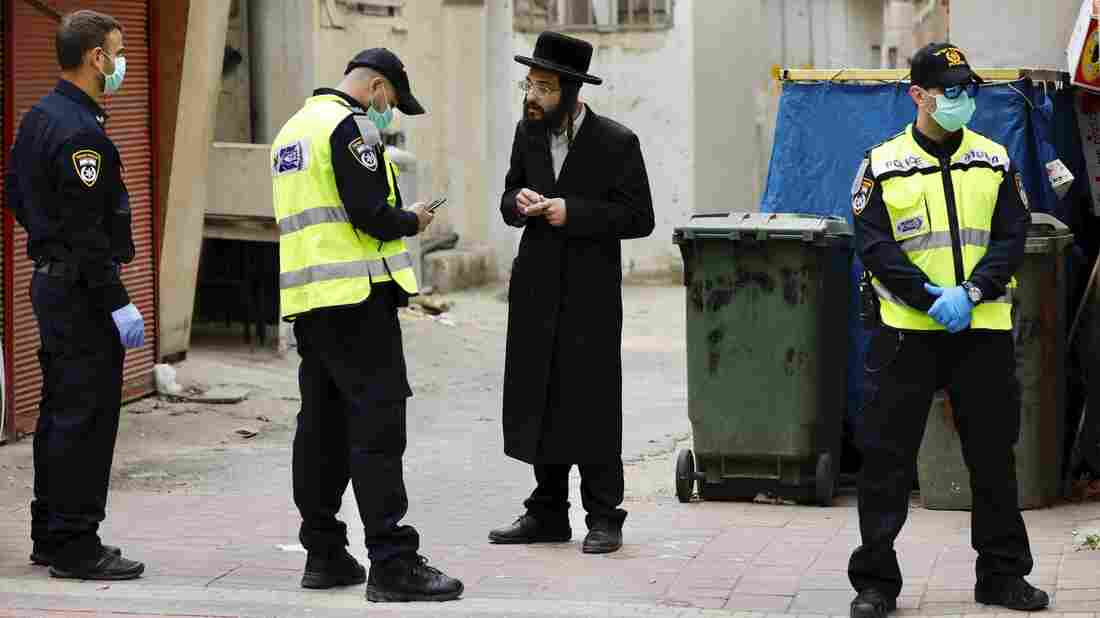 An ultra-Orthodox Jewish man is questioned by an Israeli police officer as part of the government's measures to stop the spread of the coronavirus, in the Orthodox city of Bnei Brak, a suburb of Tel Aviv, Israel, on Tuesday. Ariel Schalit/AP hide caption 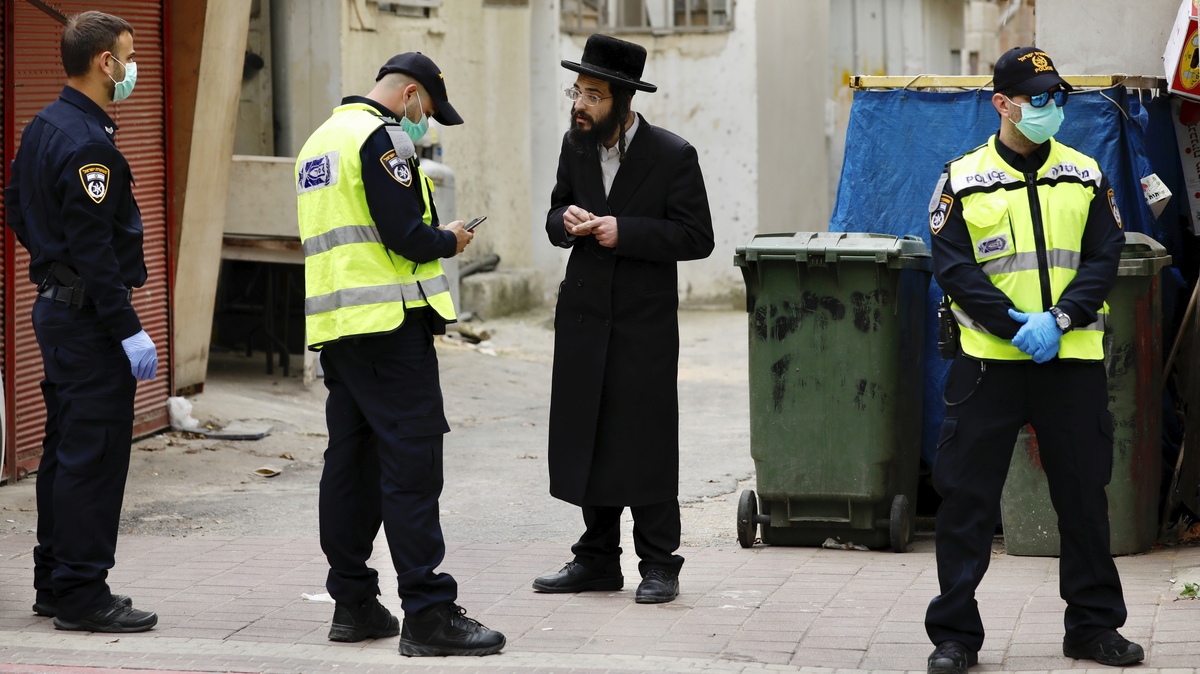 An ultra-Orthodox Jewish man is questioned by an Israeli police officer as part of the government's measures to stop the spread of the coronavirus, in the Orthodox city of Bnei Brak, a suburb of Tel Aviv, Israel, on Tuesday.

In the global race for medical supplies and a coronavirus cure, the Israeli government is mobilizing its spies, soldiers and secretive scientists.

Israel does not usually divulge what its covert agencies are up to. Some of the shadowy efforts have come under criticism, particularly over privacy concerns about surveillance. But recent announcements about these agencies' coronavirus war efforts could also serve to reassure a worried public as Israel struggles to contain COVID-19, with more than 6,000 positive cases and more than 30 dead.

- The Israel Institute for Biological Research has made "significant progress" toward a coronavirus vaccine that it will soon test on animals, the prime minister's office said. In normal times, the covert government institute develops defenses against chemical and biological threats. International news reports have alleged it develops chemical and biological weapons.

Israel Begins Tracking And Texting Those Possibly Exposed To The Coronavirus

- A man identified as the Mossad espionage agency's technology chief told Israel's top investigative TV program that the agency was securing more than 100 ventilators, 25,000 N95 medical masks and tens of thousands of virus test kits from unnamed countries. He claimed this involved racing to factories, getting hold of supplies ordered by other countries and coordinating airlifts when airports are closed. A veteran Israeli intelligence affairs journalist criticized the Mossad's procuring medical devices from abroad while Israel's own health officials warned of dire shortages for years.

Unit 81 is using its technological expertise to develop a breakthrough in the fight against #COVID19 together with @IsraelMOH & @MDAis. Here's how:

• Adapting the BiPAP home ventilating device to be able to ventilate coronavirus patients. A prototype is currently underway. pic.twitter.com/4ojRsOw5UU

- The secretive Unit 81 of Israel's military says it is adapting bi-level positive airway pressure machines, usually used at home to treat sleep apnea, in order to ventilate coronavirus patients. "Although we have never tweeted about their work, their most recent mission to battle #COVID19 has been cleared for release," the Israel Defense Forces tweeted.

- The Shin Bet domestic intelligence agency says its cellphone tracking to identify possible virus infections has led to the isolation of more than 500 people who later tested positive. The program has been criticized by privacy rights advocates and faces parliamentary oversight.

- The defense minister has proposed an initiative to track infection patterns with the controversial Israeli surveillance company NSO, according to Israeli media reports. Rights groups and a Saudi dissident allege that Saudi Arabia's government used NSO spyware to track communications with journalist Jamal Khashoggi before killing him. NSO said it does "not tolerate misuse of our products."