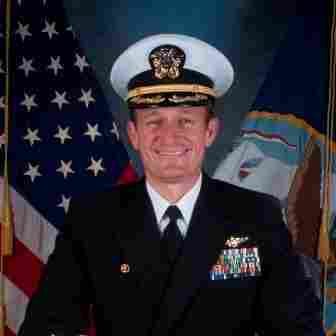 U.S. Navy Capt. Brett Crozier was relieved of his command of the aircraft carrier USS Theodore Roosevelt on Thursday after he complained in a letter about the Navy's response to a shipboard outbreak of the coronavirus. U.S. Navy hide caption

The U.S. Navy captain who wrote an anguished and widely publicized letter this week to his superiors about a coronavirus outbreak aboard the USS Theodore Roosevelt aircraft carrier, which he commanded, has now been relieved of that command.

"I lost confidence in his ability," acting Secretary of the Navy Thomas Modly said of Capt. Brett Crozier while briefing reporters late Thursday at the Defense Department on the commander's dismissal.

Modly charged that by having "widely distributed" a letter highly critical of the management of a coronavirus outbreak that has sickened more than 100 of the Roosevelt's crew members, Crozier had "allowed emotion" to color his judgment and that the captain's letter "was sent outside the chain of command" by failing to alert his immediate supervisor, strike wing commander Rear Adm. Stuart Baker.

In his letter, Crozier criticized what he called an inappropriate focus on testing crew members that slowed his efforts to have them removed from the ship to be quarantined in Guam.

"We are not at war. Sailors do not need to die," Crozier concluded in his missive. "If we do not act now, we are failing to properly take care of our most trusted asset — our Sailors."

The letter did appear to spur efforts to move thousands of crew members ashore. Modly said Thursday that 2,700 of the 4,865 sailors aboard the Roosevelt would be disembarking this week. A skeleton crew would remain aboard to maintain the nuclear-powered vessel.

On Thursday, Modly said that 114 sailors on the carrier have tested positive for the coronavirus and that the number would go up, "maybe in the hundreds."