Accessibility links
1 Million Bangladeshi Garment Workers Lose Jobs Amid COVID-19 Economic Fallout : Coronavirus Updates "Please don't give up on us," the president of the Bangladesh Garment Manufacturers and Exporters Association said in a YouTube plea addressed to global buyers. "Kindly do not let go of our hands." 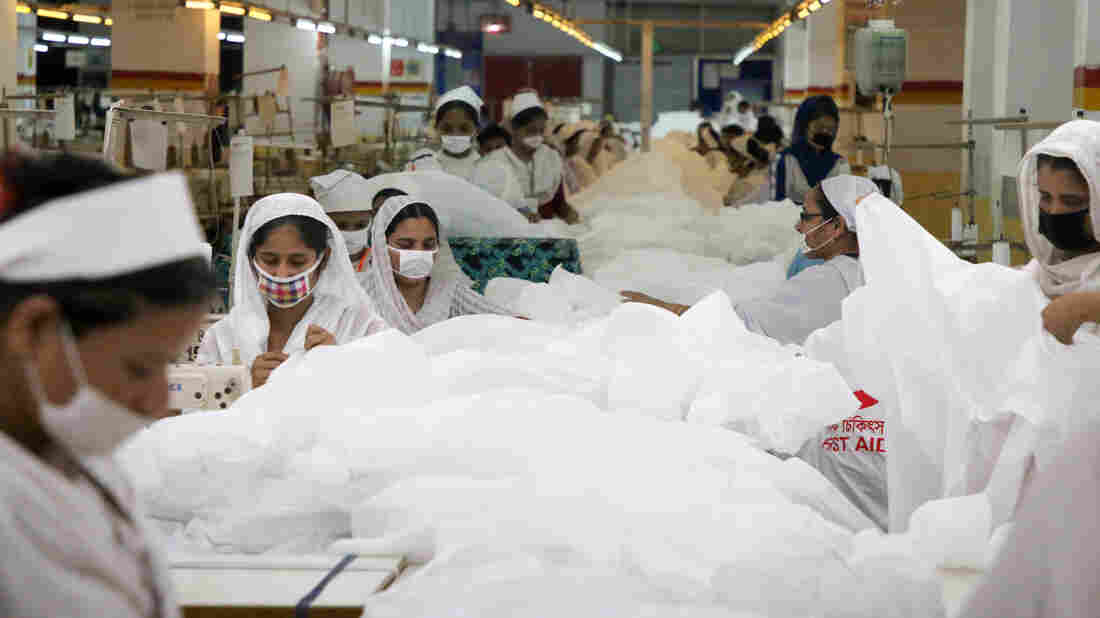 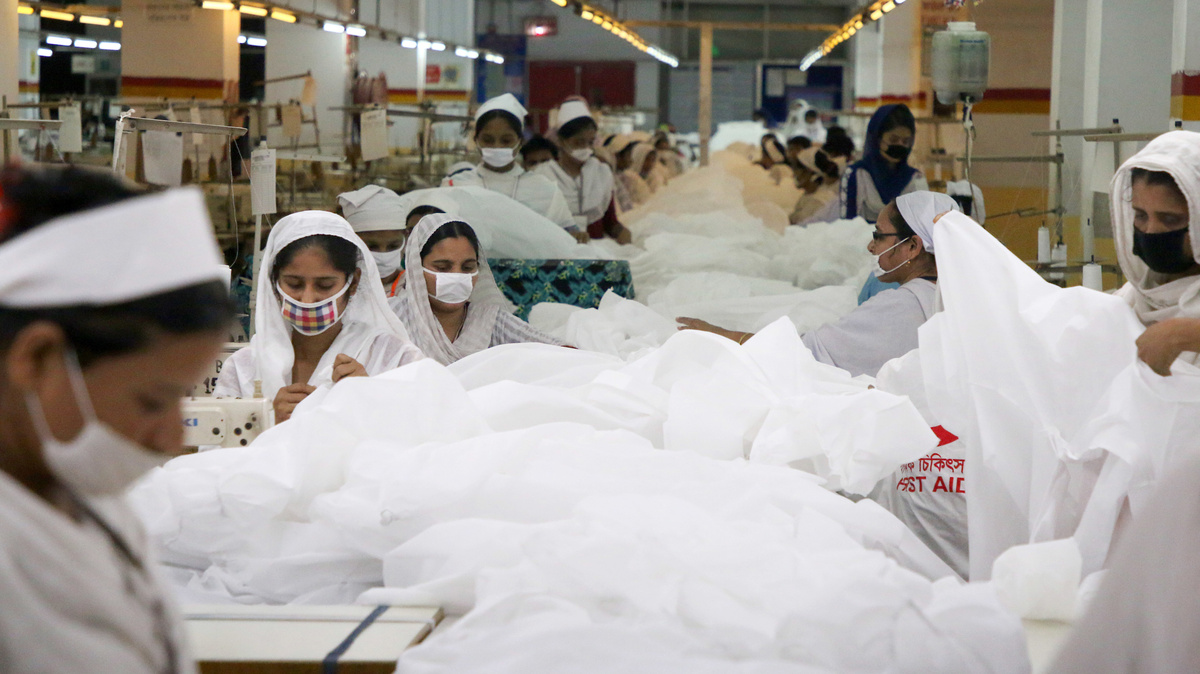 Workers in Dhaka sew protective suits at a garment factory during Bangladesh's lockdown.

At least one-quarter of garment workers in Bangladesh — the world's second-largest clothing manufacturer, after China — have been fired or furloughed because of declining global orders amid the coronavirus crisis, according to the Penn State Center for Global Workers' Rights.

The independent labor rights group, which tracks layoffs and economic damage in one of the world's poorest countries, has found that more than a million Bangladeshi apparel workers were laid off in recent weeks because of the coronavirus. Most were given no severance pay.

Bangladesh, with a population of 160 million, has reported about 60 cases of COVID-19 infection and six deaths. Testing is not widespread. The country is under lockdown and large gatherings are banned, but garment factories are still allowed to operate.

Workers in Bangladeshi factories sew clothing for some of the world's biggest fashion brands. The country's apparel industry employs more than 4 million workers and has been an engine of robust economic growth in recent years, contributing about 84% of Bangladesh's export revenue.

From March 21-25, CGWR surveyed online responses from 316 Bangladeshi suppliers, and 58% reported having to shut down most or all of their factory operations because of the coronavirus.

Industry groups estimate that will translate into $6 billion in lost export revenue this year — about a sixth of Bangladesh's total annual export revenue.

There are fears that job losses could lead to hunger among the unemployed and their families. About a quarter of Bangladeshis already live below the poverty line. The minimum wage for Bangladeshi garment workers is about $96 a month, which activists say is below a living wage.

"We will have 4.1 million workers literally going hungry if we don't all step up to our commitment to the welfare of the workers," the president of the Bangladesh Garment Manufacturers and Exporters Association said in a March 23 YouTube plea addressed to global buyers. "Please don't give up on us. I appeal to your good senses not to let us down ... kindly do not let go of our hands."

Bangladesh came under scrutiny for its garment workers' well-being in 2013, after the Rana Plaza complex in the capital, Dhaka, collapsed, killing more than 1,100 people. That tragedy led to labor reforms and new safety standards.

But CGWR found that 72% of furloughed workers were sent home without pay. It also found that 98% of buyers — many of them big global clients — refused to contribute to the cost of partial wages for furloughed employees, as Bangladeshi law requires.

Some fashion retailers, including H&M and Target, have committed to paying for orders already placed with Bangladeshi factories, CGWR found. But others, including JCPenney, Kohl's and Walmart, have not.