Accessibility links
Moscow Has Most Of Russia's COVID-19 Cases, But Work Stoppages Are Nationwide : Coronavirus Updates Moscow's spike in COVID-19 infections has forced an economic shutdown in far-flung territories where the coronavirus has so far shown minimal bite. 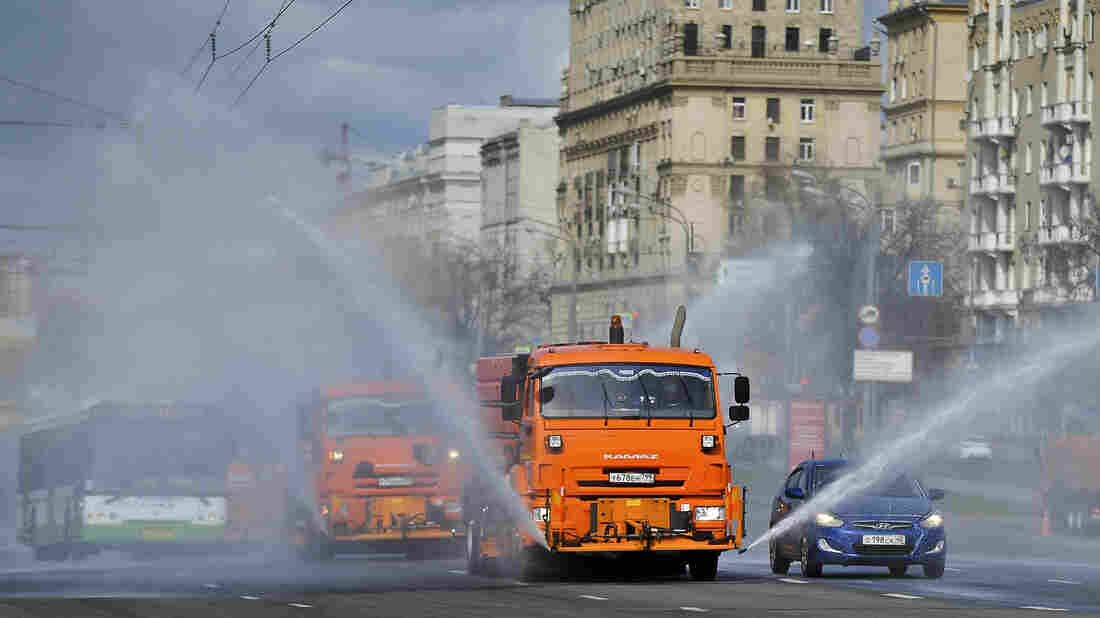 Municipal tankers spray disinfectant as a precaution against the coronavirus in Moscow on Sunday. Most of Russia's COVID-19 cases have been recorded in Moscow. Aleksandr Avilov/AP hide caption 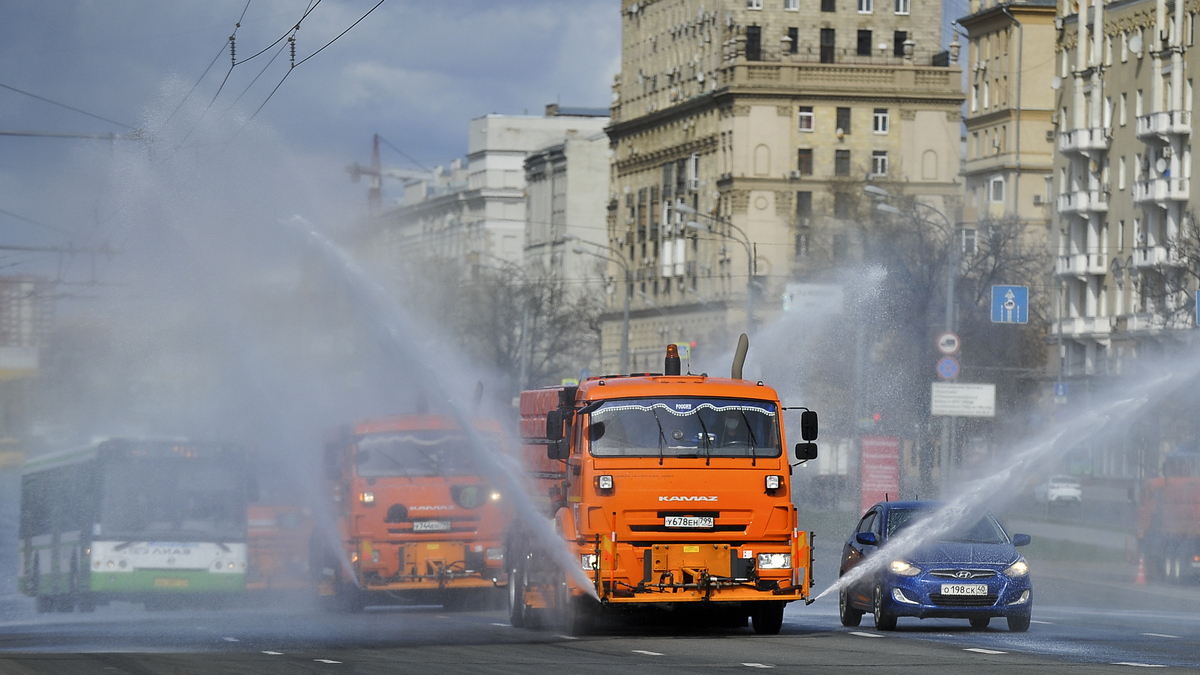 Municipal tankers spray disinfectant as a precaution against the coronavirus in Moscow on Sunday. Most of Russia's COVID-19 cases have been recorded in Moscow.

Russia now has documented over 6,000 infections and 47 deaths, though government critics argue the real numbers are higher due to problems with the scale and accuracy of testing.

For now, Moscow remains a hot spot — with the vast majority of COVID-19 cases and resources to combat the disease.

On Monday, city authorities unveiled a new home-test delivery service for residents. The kits, which users can purchase for around $25 apiece, would be offered to Russia's regions soon, said officials, without specifying when.

Most of Russia's 140 million citizens are currently in what authorities call "home isolation," amid a month-long paid work stoppage ordered last week by President Vladimir Putin.

Even so, in a speech outlining the measure, Putin also granted regional authorities leeway in responding to the pandemic — in effect, arguing a one-size-fits-all approach is impractical for the world's largest country by landmass.

"There are regions where not a single case of the disease has been identified, although there are fewer of them as time goes on," noted Putin.

Indeed, that difference is driving regional resentments — as Moscow's spike in COVID-19 infections has forced an economic shutdown in far-flung territories where the virus has so far shown minimal bite.

"Of course a lot of people say, 'What do we need to keep staying home for? We only have 11 cases,'" Dr. Salavat Suelemanov, 68, a veteran clinical pharmacologist in the city of Khabarovsk in Russia's Far East, tells NPR. "But that's why we doctors have to explain to the people why it's necessary."

In the Altai, in central Russia, the head of a local contagion watchdog group said authorities were developing guidelines to monitor Muscovites arriving to the territory.

In the Ivanov administrative region, some 200 miles northeast of Moscow, authorities warned residents not to rent to Muscovites attempting to flee to the surrounding countryside.

"We understand that there will be a wave of people coming from the capital, hoping to self-isolate here," said Arthur Fokin, the head of the region's health department, in comments carried by Russia's Interfax news agency.

"If you rent out your home to someone who spread the infection, it's you who may have problems," added Fokin, noting there are new criminal penalties — including jail terms up to seven years — for spreading infection.

Other governors have announced plans to wall off their regions completely, in hopes of kickstarting economies struggling under the federally mandated work stoppage.

Mishustin's comments amount to a warning shot, says Alexander Baunov of the Moscow Carnegie Center. "Governors are suddenly much more powerful," says Baunov. "But of course this job is now much more risky!"