Accessibility links
States, Hospitals Say They're Struggling To Get COVID-19 Supplies : Coronavirus Live Updates President Trump says the government's procurement and distribution system is "a fine-tuned machine," but many hospitals and state governors say they're struggling to get what they need. 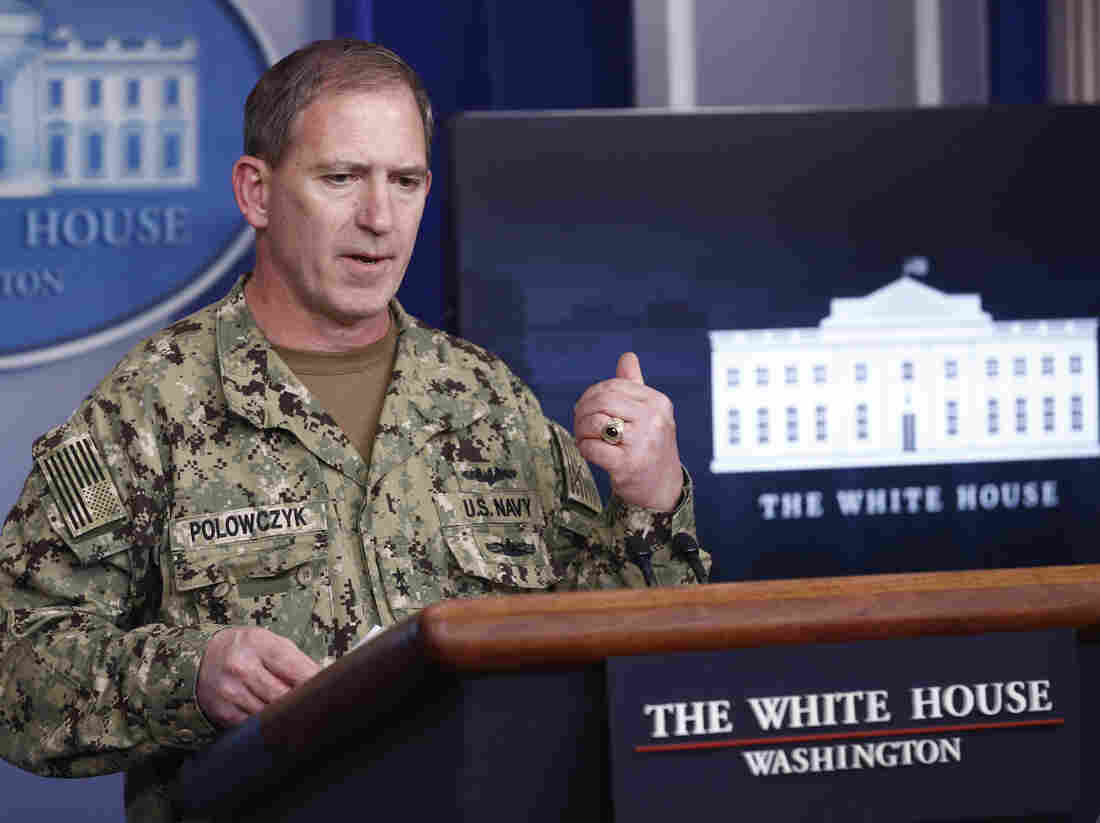 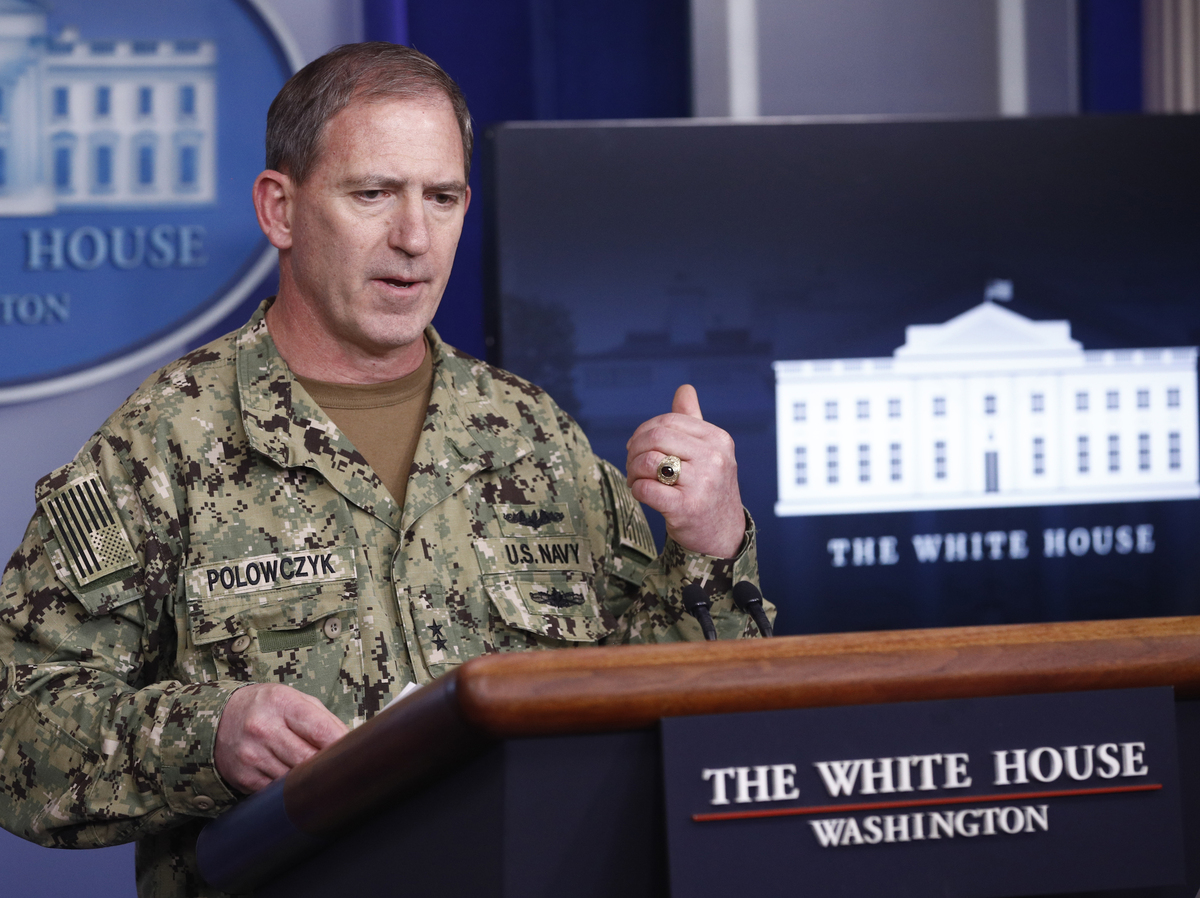 President Trump says the federal government's procurement and distribution of vital medical supplies to fight COVID-19 is "a fine-tuned machine," but many hospitals and state governors say they're still struggling to get what they need.

The White House sent Pentagon logistics expert Rear Adm. John Polowczyk to take charge of the federal supply chain. Polowczyk says his FEMA team has worked hard to add much-needed volume to the normal supply mechanisms and to funnel some medical supplies the government procures to be sold — and delivered — through the private sector.

"I'm not here to disrupt a supply chain," he said at a White House daily coronavirus briefing earlier this month.

"These six or seven distributors, they have 600 to 700 warehouses," Polowczyk said. "They have trucks to go to the hospital door every day. We're bringing product in, they're filling orders for hospitals, nursing homes, like normal."

The president has repeatedly given his administration high marks for handling the distribution of gear. "And a lot of times, you don't have to exercise the [Defense Production] Act; all you have to do is tell them, 'look, if you don't do this, we're going to use the Act.' And we've done a good job with it — maybe a great job," Trump told a recent press briefing.

But some governors and critics say the White House distribution approach of mixing federal and state entities with private health care companies continues to create confusion, anger and state bidding wars that waste time and money.

Retired Army Lt. Gen. Russel Honoré, who led Joint Task Force Katrina, a team that coordinated military relief to New Orleans and the Gulf Coast in 2005 after FEMA was widely seen as bungling the initial hurricane response, does not mince words in describing how he thinks the logistics picture is playing out with regard to the coronavirus pandemic.

Honoré says there are key fixes the Trump administration could implement right now to more clearly centralize the purchase and distribution of resources and close the supply gap with states. That's needed, he says, not just for vital gear, but for distribution of a vaccine, when one becomes available.

"That's a tactic we could do. Lock it all down," he says. "To seize it all and get it to the hot spots and then ration it to the rest of the people that need some."

"That's exactly why we have this Defense Production Act — to take control of the supply chain as well as the manufacturing chain. It's like amateur hour in the g****** White House!"

After weeks of expressing reluctance to use the Defense Production Act to require companies such as 3M to ramp up production of N95 masks, face shields and other supplies and to prevent their export abroad, Trump last week relented, partially invoking it to ensure that personal protective equipment for medical personnel "is kept in our country and gets to where it is needed to defeat the virus," he said.

Gov. Jay Inslee of Washington — the first state hit hard by the coronavirus — says it's not enough for the White House to merely pressure companies.

The Democrat told NBC's Meet the Press it's "ludicrous" that the Trump administration still hasn't unleashed the full force of the Defense Production Act.

"Can you imagine if Franklin Delano Roosevelt said 'I'll be right behind you Connecticut, good luck building those battleships.'"

Inslee said the U.S. "[needs] to nationally mobilize" the Defense Production Act "so we can get these companies instead of making cup holders start making visors, start making test kits. We don't have enough test kits by far in my state — or anywhere in the United States."

Senate Minority Leader Chuck Schumer, D-N.Y., and others have called repeatedly for the White House to name a czar — preferably a top military official — to oversee the production and disbursement of vital medical equipment. The White House has dismissed the idea, saying Polowczyk at FEMA is doing a good job.

FEMA officials past and present say some of the criticism of the agency is unfair, as it has never before faced a 50-state disaster.

"This is a huge challenge. And for FEMA or the federal government to just take over the private sector supply chain would be a very daunting challenge," says Daniel Kaniewski, who until February was FEMA's deputy administrator. "I think the challenge is for the administration to decide what is the most effective way to deploy these resources. And right now, it seems that they're still trying to get their arms around this."

Kaniewski says the agency is not a first responder and was never meant to play that role and neither is it a national strategic stockpile of medical supplies. Instead, he says, it's meant to play a "stopgap" role in national emergencies.

"In other words, it was meant to be put in place for the immediate response until the supply chains could catch up and meet the overall demand," he says.

"There hasn't been a time since World War II where our supply chain has been so severely tasked to respond," says David Drabkin a former senior federal procurement executive at the General Services Administration. "And we know from all reports that the supply chain is not capable of satisfying the demand."

Drabkin says more should be done to stop states from bidding against each other and the federal government over vital supplies. "That kind of competition ought not to happen. It does ugly things and reduces the efficiency of the buying process itself," he says calling it the result of "a failure of leadership. It's a failure of recognizing weeks ago how significant this event was going to be," Drabkin says.

Meantime, former Army Gen. Honoré is skeptical that the Trump administration will ever take tighter control of those supply and distribution chains. So, the retired three-star general says it is now up to hospitals — and states — to swap supplies. "We have to adapt and overcome like in any war because the solution will not be coming from the federal government on that issue," Honoré says.