Accessibility links
'Please Don't Politicize This Virus,' WHO Head Says After Trump Threatens Funding : Coronavirus Live Updates Using the COVID-19 pandemic to score political points is dangerous and will result in "many more body bags," the WHO's leader said less than a day after President Trump criticized the organization. 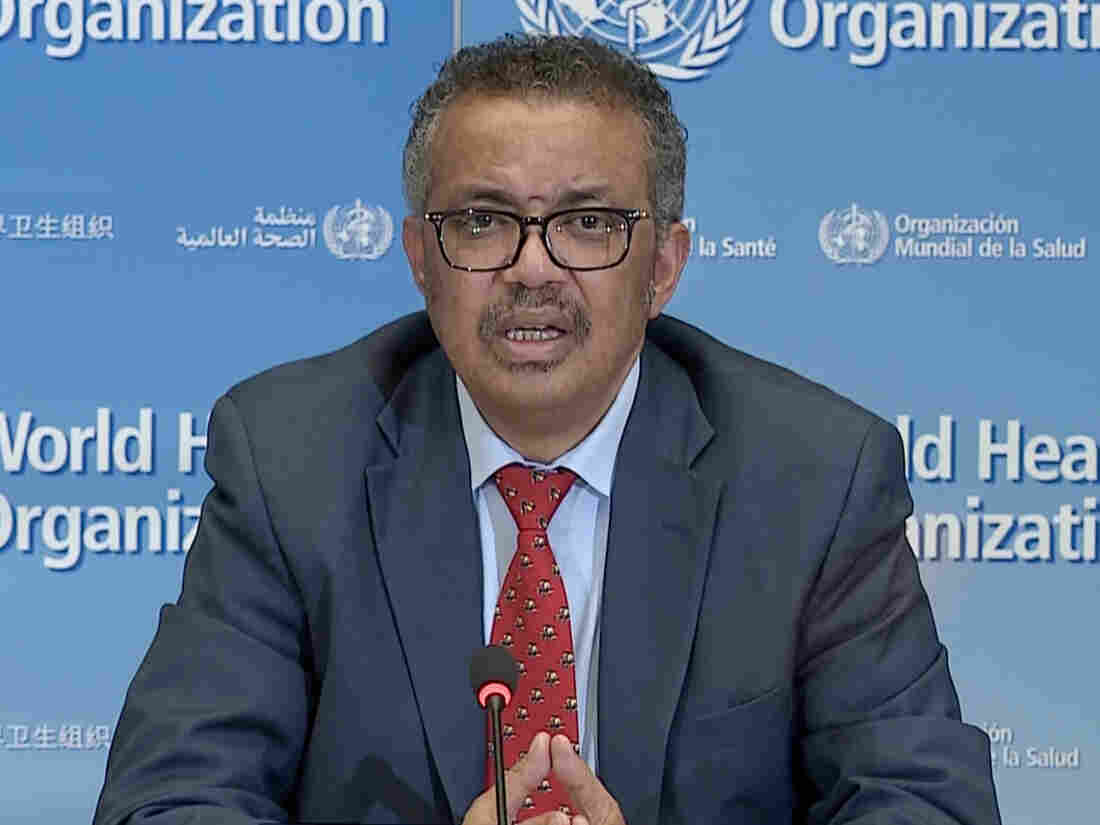 "No need to use COVID to score political points," World Health Organization Director-General Tedros Adhanom Ghebreyesus says. "You have many other ways to prove yourselves." AFP via Getty Images hide caption 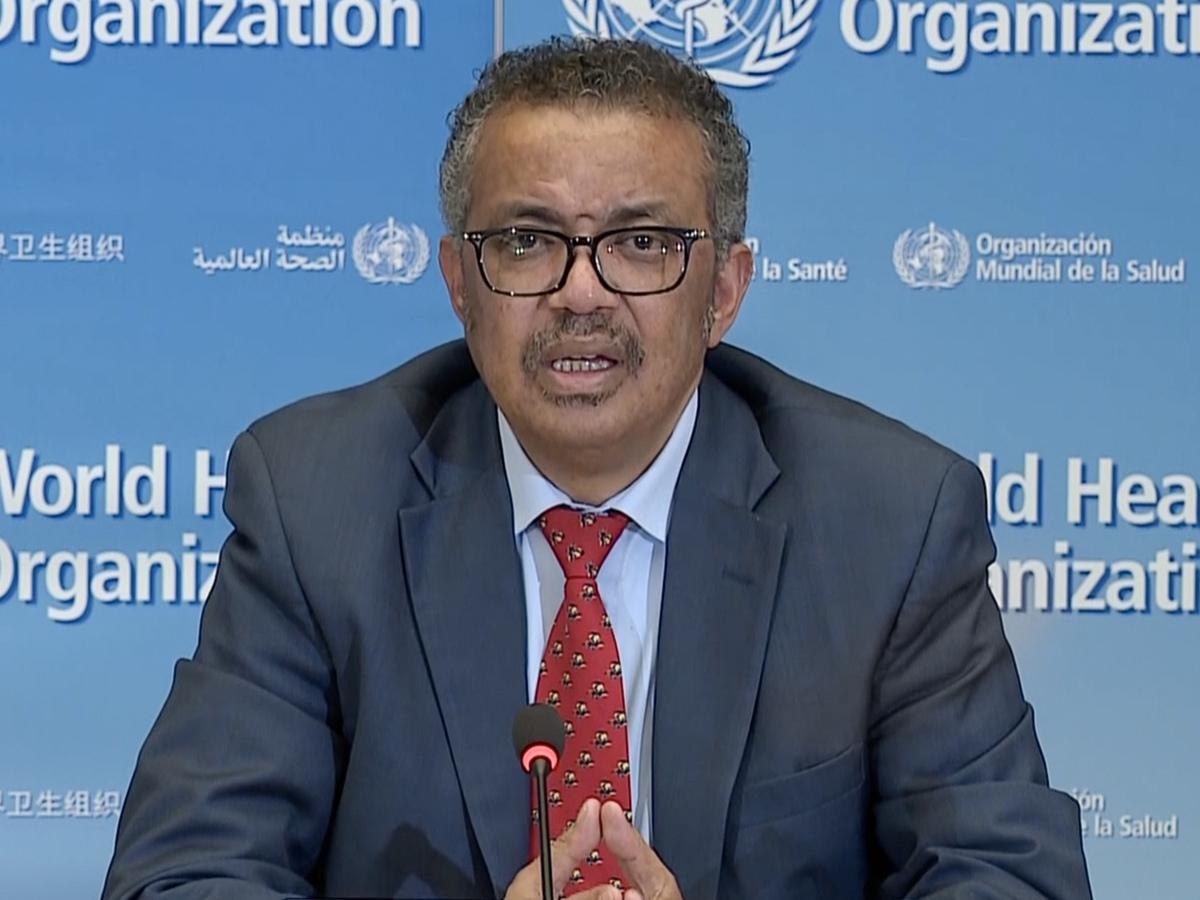 "No need to use COVID to score political points," World Health Organization Director-General Tedros Adhanom Ghebreyesus says. "You have many other ways to prove yourselves."

Using the COVID-19 pandemic to score political points is dangerous and will only result in "many more body bags," World Health Organization Director-General Tedros Adhanom Ghebreyesus said Wednesday, less than a day after President Trump criticized the WHO and its relationship with China. Tedros also revealed he has received death threats in recent months.

"Please don't politicize this virus," Tedros said in a briefing in Geneva, after he was asked about Trump's remarks. He later urged political leaders to "please quarantine politicizing COVID."

"The focus of all political parties should be to save their people," Tedros said. He added that politicizing the virus only exploits differences at the national level.

The remarks came after Trump sharply criticized the WHO during a White House coronavirus task force briefing Tuesday night and suggested he might put a hold on U.S. funding — the largest single source of money for the health organization.

Tedros did not refer to Trump by name as he stressed the importance of confronting COVID-19 as a common enemy. And he stated several times that he does not mind being targeted by personal attacks. Everyone's focus, he said, should remain on the coronavirus, not political or international rivalries.

"The unity of your country will be very important to defeat this dangerous virus," Tedros said. Without unity, he added, even countries with advanced health care systems "will be in trouble, and more crisis."

COVID-19 has now been blamed for more than 80,000 deaths worldwide and more than 1.4 million people have been confirmed to be infected by the virus, as of Wednesday afternoon, according to a COVID-19 dashboard created by Johns Hopkins University's Whiting School of Engineering, which reports pandemic numbers in near real time.

"No need to use COVID to score political points," Tedros said. "You have many other ways to prove yourselves."

To do so, he added, is "like playing with fire."

Asked about how he views criticisms leveled at him and the WHO during the crisis, Tedros said that he had been targeted by racial slurs and death threats and that those threats had emanated from Taiwan.

The WHO director-general added that he doesn't care whether people target him personally. And he said he is proud to be a black man, no matter what racists might say.

As for the death threats, he added: "I don't give a damn."

During the briefing, Tedros also urged governments to unite to fight the pandemic and cited the historic joint effort by the U.S. and the Soviet Union to fight smallpox during the Cold War as an example.

"The former U.S.S.R. and United States came together and agreed to eradicate smallpox and brought the whole world together with them," he said.

At the time of that cooperation in the 1960s, he noted, smallpox was killing 2 million people each year and infecting 15 million annually.

"The world could not tolerate that kind of disaster," Tedros said, urging the U.S. and China to work together to fight the crisis.

The U.S. is the WHO's largest contributor, followed by the Bill & Melinda Gates Foundation; the Gavi, the Vaccine Alliance; and the United Kingdom, NPR's Laurel Wamsley reports. China, the world's second-largest economy, is not among the top donors.

The majority of the WHO's biennial budget — $5.6 billion, in the most recent term — comes through specified voluntary contributions. In that category, the U.S. is responsible for nearly 15% of the funding. China accounts for less than 1 percent — 0.21% — with an additional 0.11 coming from the semiautonomous region of Macao.

The WHO also gets nearly $1 billion in funding from member nations through "assessed contributions." The U.S. currently accounts for 22% of that amount, while China is second — responsible for around 12%, according to the current tally.